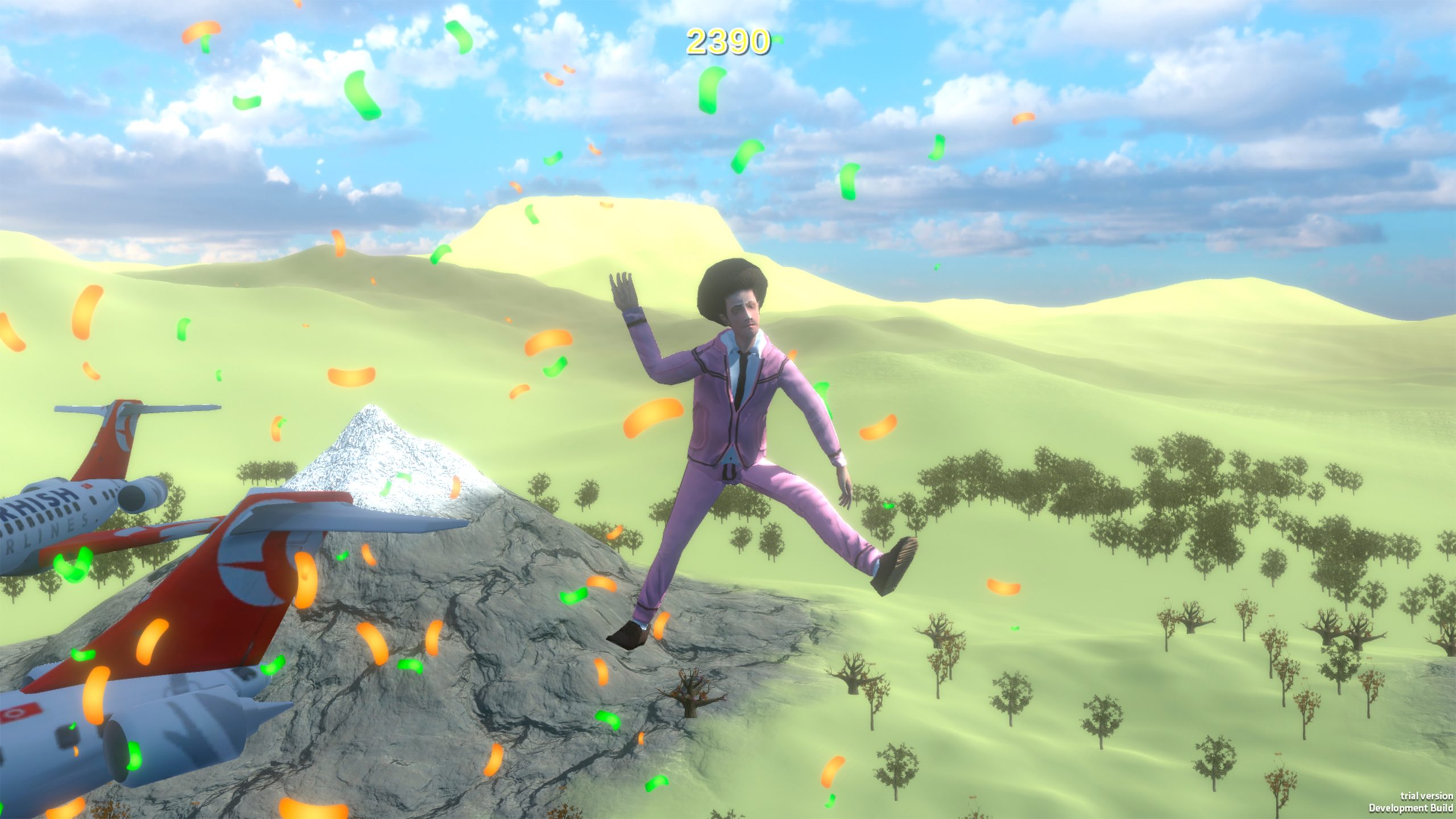 A garbage excuse for a game, Disco Cannon Airlines is Random Spin's latest attempt to sell you a Platinum trophy. The Finger Guns Review.

A garbage excuse for a game, Disco Cannon Airlines is Random Spin’s latest attempt to sell you a Platinum trophy. The Finger Guns Review.

Here we go again. I thought we were on the road to improvement. After playing turgid mess after turgid mess from Random Spin I finally thought they had found a way to release actual games instead of Platinum trophies with a price tag. I almost enjoyed playing Phlegethon and thought the developer were heading in the right direction. I guess I was wrong. Their very next game – Disco Cannon Airlines – is awful. Its tiny price tag aside, there’s no silvering to this thunderous s**t show of a cloud.

Like many of the games from Random Spin, Disco Cannon Airlines feels like a game named purely based on what purchasable Unity assets are available. In this instance, it’s a disco dancer, a cannon, a cow in a pink wig and some passenger aeroplanes. What thematic similarity do these things share? None. In what way will the game try to explain them being thrown together? It won’t. Why bother when all you’re trying to do is sell some Platinum trophies?

The aim, which goes unexplained by the game other than a score board, is to go high. The afro wearing disco dancer begins this journey in a cannon. After charging it up, he’ll be blasted out of the cannon and up into the sky. Press X and the dancer explodes with confetti, is awarded some points and travels a little further upwards. Every so often, you’ll come across an aeroplane or, for some reason, the base of a bouncy house. Hitting these award more points. Why is any of this happening? For no reason. The game might try to pass it off as madcap humour but to me, it’s lazy design.

Within a matter of seconds, you’ll have seen everything that Disco Cannon Airlines has to offer. The aeroplanes are all identical. They crisscross across a vertical slice of the sky every so often. The bounce pads are all the same. Everything within the game is contained within this singular column into the sky. That space is walled off from the world by invisible barriers that reach as high as I could be bothered to travel.

After a short while, the obstacles stop. Instead you just continue to travel into the sky, confetti explosion after confetti explosion, until the ground is so far away that it isn’t even rendered anymore. You could stop clicking and you’ll fall to Earth – this won’t effect the score board – or keep clicking forever if you wanted too. There’s no aims built in to the game. There’s no goal to hit. Instead, there’s a Platinum trophy that’ll unlock within minutes. On the way there, you’ll unlock a new trophy with every thousand you add to your score. After the Plat pops, there’s no reason to keep playing the game. There’s no leader board. There’s no challenge or motivating factor.

Crap With A Plat

To put it bluntly, Disco Cannon Airlines can barely be described as a game. Some hodgepodge assets thrown together with a single, barely functioning mechanic and no win condition is a more apt description. It’s awful. The single best aspect of this game is the soundtrack. It’s pretty damn funky – but even that’s not original. My kids walked in while watching YouTube and the exact same music was playing on the backing of a video. I imagine this is some royalty free music you can buy from a website somewhere.

Some of you will have arrived at this review looking for one thing. So here it is: It took me 3 minuets and 15 seconds to unlock the platinum trophy for Disco Cannon Airlines. Half of that time, I was talking to my son and blindly clicking X. I imagine it’s more than possible to unlock the Platinum trophy within 90 seconds.

So any hope I had that Random Spin had turned away from their trophy baiting days was misplaced. They’re back at it once again. Disco Cannon Airlines is an incredibly poor product that’ll boost your trophy number but won’t fill you with that gratification that usually accompanies those virtual cups. These will feel unearned and unsatisfactory. Even at only £0.79, I felt like I’d been robbed.

Nothing more than trophy bait, Disco Cannon Airlines is a collection of random Unity assets thrown together to form some semblance of a game. Without a win condition, leaderboard or motivating factor, the content of this game lasts less than a minute. Even then, you’ll be hard pressed to find anything entertaining within those sixty seconds. Avoid.