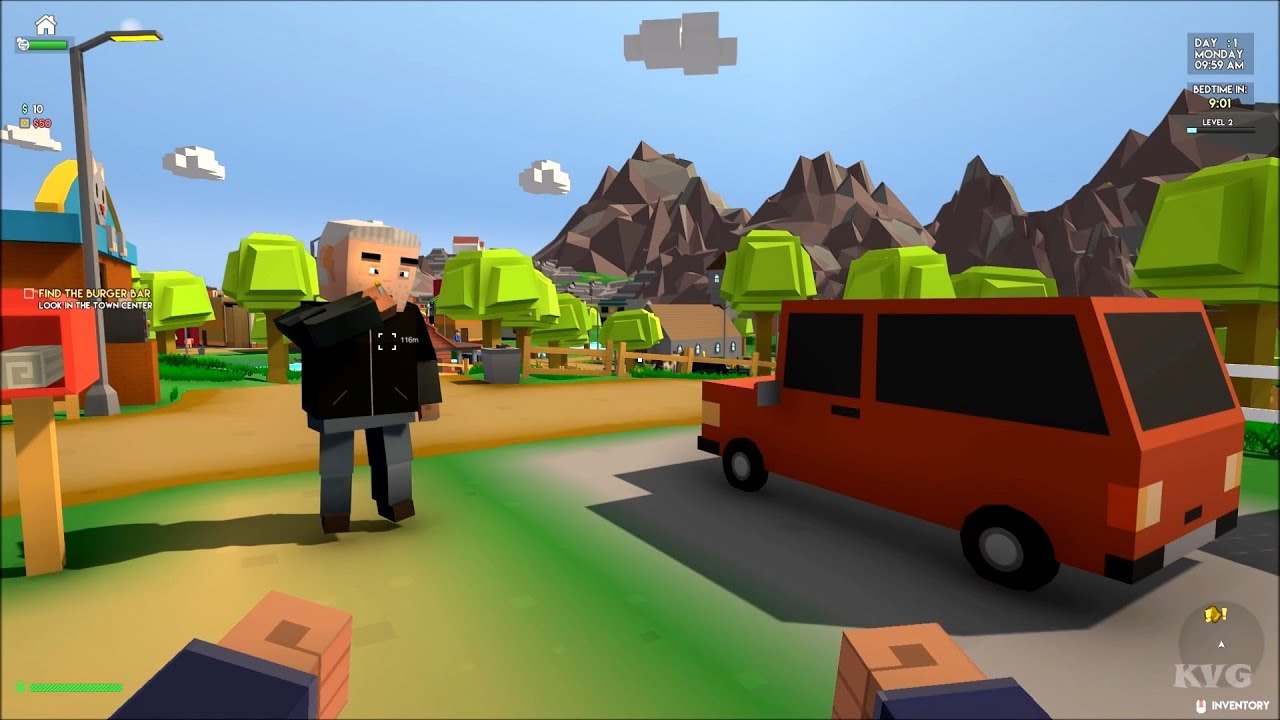 Family Man begins like it means to go on.

With a splendid opening 45 minutes that really throws you in at the deep end of this guy’s turbulent life, you immediately get a sense that he’s a good man that may or may not have taken on just a little more than he can chew. And well, this is a No More Robots publish, so there’s always going to be something special here that’s worth rooting out.

And to the games credit it grabbed me fairly quickly. Family Man has an introduction that, well I can only really describe it like the opening to Pixar’s magnum opus, Up. It’s a fast forward through your protagonists work life, meeting the love of his life, marrying them, having kids and then struggling through daily life on a small paycheck and all the drama that entails. This is all knocked out in the first twenty minutes or so and your good friend Bobby is always on hand to make sure you’re always standing upright. Well, nearly.

Yourself and Bobby find yourself in the slightest bit of trouble with some bad apples after a job goes wrong, and before you know it you’re working every day paying off a mountain of debt you’ve built up. Taking any kind of job available it’s up to you to keep your house tidy, keep food on the table for your wife and kid, working every gig you can and pay off the criminals you’re indebted to. Family Man is a lot.

And that’s essentially what it is. You’re the husband, you’re here to provide to the family and to the mob bosses breathing down your neck equally. Spending time with the family and doing chores at home will keep them happy (along with getting back for your kids bedtime stories), but that will chew into your working hours you can earn money. Your wife is at home looking after your child so while you’re running around for the mob flipping burgers and stealing out of the cash register you’re the sole breadwinner and the balancing act is the game. One would argue it’s a bit too close to real life for some players.

You’re more or less left to your own devices once the tutorials are out of the way. There’s a very simple control scheme to learn and then you’re out and about doing whatever you can to earn the dollar dollar bills to keep everyone (seemingly but yourself) in your life satisfied. The aforementioned bedtime stories ensure you’re also always against the clock as you’re expected home before your kid goes to sleep, so you’ve only got so much time to get everything done, and the money the mob want from you raises each day, which is nice of them.

You can’t give it all to the mob, you see. Your family will go hungry and leave if you can’t provide for them (even though the wife is strangely understanding about you losing your job and being unable to pay the bills. She says it’ll be ok but she’ll still leave you the moment it doesn’t go right which seems about right actually ok I’ll drop it now I just wanted to get that in there…

Earning money isn’t too tricky, though. I played it at first by ensuring i had enough for the mob, and everything else was just a bonus. There are plenty of characters to meet in your town where you can pick up work or do some very illegal things for your mob friends. Just remember to put the cash in the safe where the mob collect the money. I completely forgot one day and that was it. Game over. Family Man doesn’t suffer fools. You know your role, get it done.

While the game certainly attempts to push you in certain directions it’s not always the most beneficial, at least I didn’t think so. Whilst getting tripped up by the mechanics of the ticking clock or the ever growing wallets of your mob overseers, I instead attempted to move off the beaten path and see if I could make my money elsewhere, ensuring I had enough on me to cover the debts and get home on time. It was a tricky system, and in my second playthrough I followed the path the game wanted me to and it didn’t make a whole lot of difference, I may have earned a bit more but only slightly. You’ve got plenty of options to earn money, use the pattern you’ve settled into to make it easier to keep all of the plates spinning at once.

As you can tell from the screenshots, Family Man isn’t a looker. Its blocky art style counteracts the bleakness of the story well, and though it’s hard to take seriously at times the visuals pop on the Switch OLED screen, even if I noticed slowdown and pop-in as I navigated through the town for the first time. It’s a bit unacceptable in 2022, and considering this is perhaps one of the least visually intense games I’ve played all year, there’s no excuse for it really, even on five year old hardware. Family Man I imagine could run on a PS2 with little fuss so struggling on a Switch is bizarre. Still, once you’re engaged in the story you barely notice it, there’s too much else to focus on.

And that’s the crux of Family Man really. You’re either going to get sucked into its gritty story, well written characters and constant peril or you’re going to find it somewhat overwhelming. There’s an awful lot to be thinking about all at once and the pressure of keeping everyone happy whilst the clock ticks down every single day can feel a little bit too much like real life at times. By the time I finished the game I was exhausted and wanted an actual day off of my life. It’s certainly rewarding in the endgame when you’ve kept your promises to everyone and the credits roll, but boy it’s an effort. Family Man doesn’t waste time and each second you’re not earning means your family or your criminal shadows are going to hunt you down.

You feel genuine guilt when your blocky Minecraft child doesn’t get their bedtime story. I’m not a father in real life. I didn’t sign up for this guilt trip. If this is what it feels like in real life I’m good remaining childless, thanks.

Solo developer Broken Bear Games has done a stellar job at creating an experience with genuine peril and consequences. The bleakness makes it feel like a Devolver game and No More Robots have once again found a gem that’s worth a shot, following glorious titles such as Not Tonight and Lets Build A Zoo!. If you’ve played either of those, you’ll feel right at home with Family Man. It feels like something No More Robots would publish, and for that reason it’s recommended by us.

Family Man is a gritty story-driven RPG with a bleak but compelling undertone. The mechanics can feel repetitive but considering the endless peril you find yourself in, there’s comfort in the familiar the further you get. Keep the plates spinning, keep everyone happy and you may just get out of this alive. Maybe.

Family Man is available now on PC via Steam, Nintendo Switch (reviewed on), Xbox One and PS4.