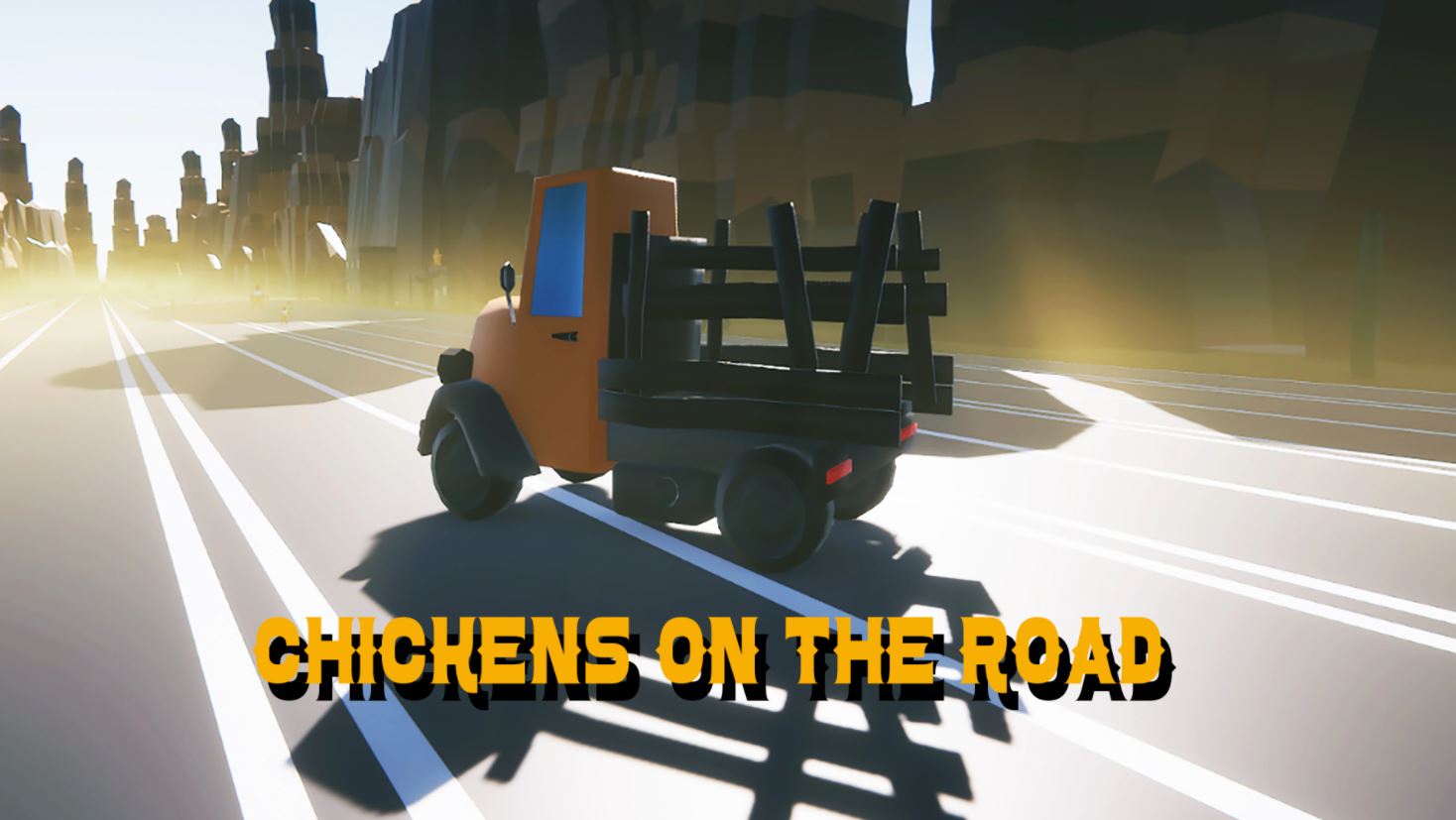 Chickens On The Road is not so much a game but more a Platinum trophy with a price tag. The Finger Guns Review.

I know some of you are here for one thing and one thing only. I unlocked my first trophy on Chickens On The Road at 19:38:56 on the 7th of January, 2021. The Platinum popped at 19:44:21 on the same day. It took a total of 5 minutes and 25 seconds. This game costs £0.79 in the UK. Yes, this game is very cheap and a very quick Platinum trophy, much like the other game from Random Spin-Games, Road Bustle. If that’s all you’re interested in, be safe in the knowledge that you won’t be disappointed here. Go in peace.

If, on the other hand, you believe there’s an art to making a video game and that a game should be more than just a Platinum trophy with a price tag, the rest of this Chickens On The Road is for you.

Imagine Frogger, but in reverse. That’s the essence of Chickens On The Road which on paper sounds quite appealing. In practice however, it’s horrific. In this game you play as a flatbed truck driving down an endlessly straight highway the wrong way. The aim of the game is to avoid the oncoming traffic while hitting the chickens that are on the road. Yellow chickens award you points and green chickens remove a few points. The larger the chicken, the more points they add/subtract from your score. PETA would have a field day with this game.

Why are their ‘Chickens on the Road’? Maybe a local chicken farm has had a Chicken Run style situation? Maybe the game is set in some dystopian future where chickens have become the dominant race on the planet. Or maybe it was an easy asset to put in a game as something to get destroyed as you run them over? There’s no explanation within the game but I suspect the last suggestion might be the answer.

Like many of these games that live and die on being a Platinum trophy that takes as long to unlock as the game takes to download, there’s some reused assets in Chickens on the Road. If you’ve played Road Bustle, you’ll recognise pretty much everything in the game. The cars, the roads and the scenery are all the same as this developer’s previous game and look just as cheap & nasty.

Maybe this game would have some appeal if it had a challenge or purpose to it. As it is right now, it has neither. The oncoming traffic doesn’t come quickly or frequently enough to cause any kind of issue that you can’t drive around. The truck has no turning circle (pull backwards and the truck will simply rotate instantly) so the only problem you’ll have is dealing with the shoddy collision detection. There’s a single straight road that repeats ad infinitum so you could run over the chickens till your heart’s content – but there’s no point to doing this. The game isn’t run based as your score is saved after crashing. There’s no objective other than running up an ever increasing high score and no incentive to do so – other than the Platinum trophy.

That’s the crux of my issue with Chickens On The Road. It’s not a game. It’s some Unity assets that interact with one another in barely functional ways in the guise of a game. There have been no considerations on how to make this game ‘fun’ or ‘entertaining’. There has instead been a consideration to “How quickly can we gift the player a Platinum trophy so that we end up on those ‘quick trophy’ YouTube videos and sell a few thousand copies”.

Let’s put it this way – even if Chickens On The Road was a free mobile phone game with adverts after each death, I’d have uninstalled it from my phone after 2 minutes of play because by then, you’ve seen everything this game has to offer and there’s no reason to play it any longer than that.

The only silver lining to this game is the sound track which is pretty funky. Everything else about Chickens On The Road –  the game play, visuals and premise – are so paper thin and designed for a singular, distasteful purpose that despite this game costing less than a bag of Doritos, I’d find it hard to recommend to anyone other than die hard Trophy Hunters.

Chickens On The Road is available on PlayStation 4 (review platform).