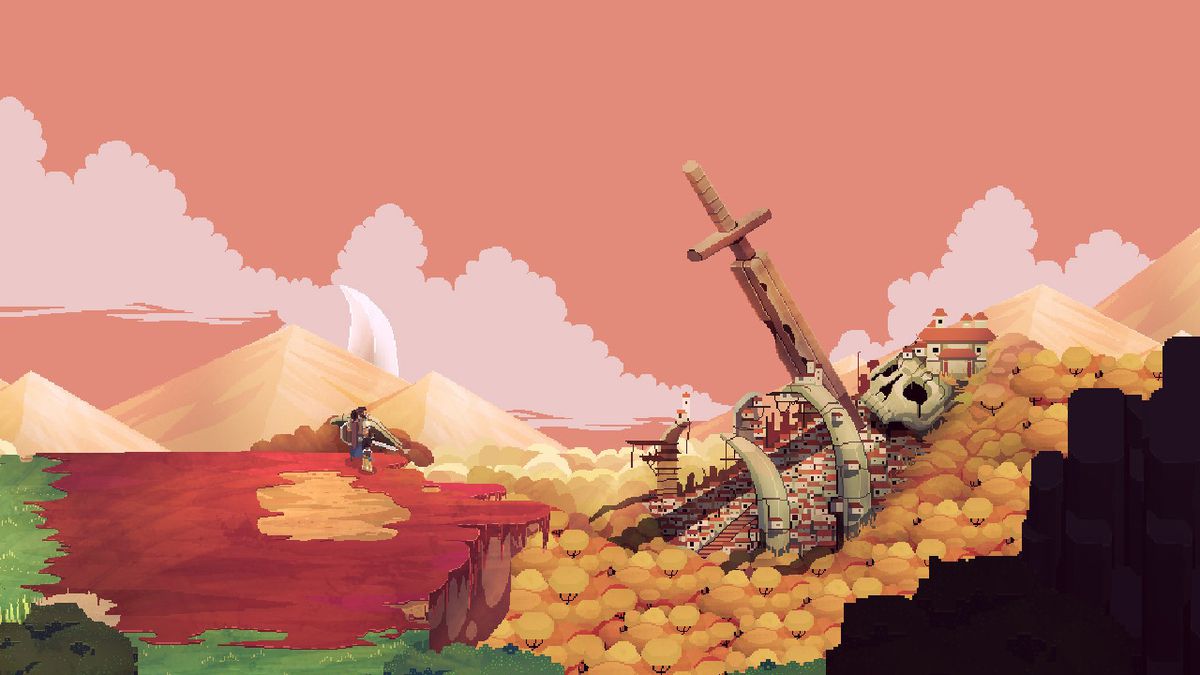 A top-down action game with a familiar story, is No Place For Bravery welcome here? The Finger Guns review:

The buddy-system game has come along way over the years. From Pocky & Rocky side by side, to Banjo and Kazooie in a symbiotic/backpack relationship. We’ve gone from Jak and Daxter to “dad vibes” in The Last of Us, for better or worse. More recently, we’ve had Kratos accepting paternal responsibility (at a push) on a grander scale. But what about the indies, the pixel-based retro stylings? Well, that’s where No Place for Bravery comes in.

Styled around the top down sensibilities established by The Legend of Zelda, twinned with the oxymoronic modern-retro aesthetic of Hyper Light Drifter and Olija, No Place for Bravery fits rightly into that whole “Souls-like retro game” niche. Try-and-die combat, resettable campfires, it’s all here.

But that’s not a detriment: it’s actually one of my favourite new genres (ask me about Hyper Light Drifter, for example). So does this modern throwback stand tall and brave, or is there no place for it? Let’s find out.

Much like 2018’s God of War, No Place for Bravery starts off in a time of battles long fought. There’s towns made in the bones of giants, a colossus lays dormant elsewhere, and our protagonist Thorn is enjoying family life. As big and stocky as warriors go, Thorn is teaching his daughter Leaf how to hunt. Again, not the most original of framing devices, but we’ll roll with it.

As expected, the idyllic peace is shattered, their village attacked and Leaf kidnapped by a warlock. No rhyme or reason why, no elaborate “I will have my revenge, Thorn!” moment. Just taken, leaving Thorn in despair. Cut to some intervals in time, in which Thorn discovers a young lad in the body of an enemy, to ten years later with Thorn having adopted the crippled boy.

But this isn’t a warrior retirement sim. Soon the evil forces of the Helwyr strike again, forcing Thorn back into a quest for revenge he thought he’d given up on. Against his wife’s wishes, Thorn and his lad Phid set off, determined to find out what happened to his daughter all those years ago.

You Never Forget How to Fight

As mentioned, No Place for Bravery is a top-down brawler. Not in the literal, Smash TV sense, more the off-kilter angle akin to Link Between Worlds and such. You can see Thorn and Phid’s faces, for example. Utilising this perspective, players will take the two through fierce combat situations in their adventure.

Much as I hate to be remiss and call it “Souls-like”, there is that modern element of combat here. Thorn has a stamina meter, as well as a block meter, that have to be watched. Attacking, blocking and dodging are all tactical, none of this button-mashing, hit-and-hope here. There are also special attacks to be equipped, that don’t require magic but have a cooldown per use. Then there’s the executions; button prompts on dying foes that zoom in for some visceral final blows.

Death has its price, in the literal sense. Dying will set Thorn and Phid back to the nearest campfire, not bonfire, with a monetary deduction. It doesn’t sound like a punishment, but given you need money to buy skills, you’ll want to keep an eye on those purse strings.

It’s not as strict and unforgiving as a Souls, hence not wanting to draw obvious comparisons, but it can and will get tense if you drop your guard. I’ve been caught out a few times, through carelessness and haste.

The Lands of the Dead Look So Alive

Whilst the premise is all doom and gloom, and the combat tactically violent, you’d be forgiven for thinking that it’s nothing but dark imagery here. Well, prepare to be surprised, as No Place for Bravery is extremely pleasing on the eye.

It’s got a pixelised aesthetic throughout, with characters and bone piles looking like they wouldn’t be out of place in SNES game. It reminds me somewhat of Team17’s Not a Hero, that stylised, minimal pixelation. Better yet, remember Junior Senior’s video for Move Your Feet? That kind of style.

Traversing between idyllic villages, to underground dwarven caverns, right up to frozen carcasses of gigantic dragons has never looked so good. It’s not going to be to everyone’s taste, don’t go in expecting Breath of the Wild-like spanning views. To me, the retro enthusiast, it looks like a demake of God of War, and I like it.

Back to combat and exploration now, as the two are interlinked, there’s plenty to take in as Thorn and Phid explore the realms of Dewr. For one, it’s worth exploring to expand on the lore of the past, why the world is how it is and fleshes out the story.

It also helps Thorn develop new skills. There’s no experience meter here, no levelling system. Like Link to the Past, Thorn picks up new weapons, but all the “stats” are the same. However, he can buy fancy new skills as he goes. Be it for sword or hammer, there’s a variety of moves to learn.

But these aren’t learnt in the conventional sense. They cost money, as mentioned earlier, but that’s not all. Thorn will need to find supplementary pieces of text, scrolls and such, to be able to purchase them. Fortunately, these aren’t incredibly difficult to find, as areas with goodies are marked as such on the map.

They’re not always easy to get to, however. No Place for Bravery isn’t primarily a platformer, yet the game does throw the occasional floating platform in for good measure. Some are plot-progression, others are for the aforementioned skills and lore. Either way, it’s always better to explore and take in the world.

What I did enjoy about No Place for Bravery, and call me simple if you like, is the tone of the writing. For context, I like fantasy books. Brent Weeks and Brandon Sanderson write in tones I like, yet I struggled with Tolkien and Dune. It’s not the “big words”, it’s the feeling that you’re meant to be primed beforehand, which is off-putting. Here, however, it’s that modern prose that I enjoy.

Which goes hand-in-hand with the dialogue, too. Serious moments are penned nicely, as are the chuckle-worthy moments when Thorn rescues a sorcerer. There’s no fourth wall, “here’s Wonderwall” moments like Guacamelee! pulled on us, but there’s an air of silliness at times.

Which is quite welcome. It’s too easy to get bogged down in super-serious revenge stories, but save that for the likes of Kratos and Joel. Sometimes a bit of levity and punchy dialogue add some flair to proceedings, mixing it up a bit. There is still the undercurrent of desperation on Thorn’s part, with Phid acting as the occasional voice of reason/audience surrogate to keep things going.

In terms of issues within the game, I didn’t particularly have any grumbles with No Place for Bravery. I haven’t had any graphical issues, no characters dropping through the map or anything disastrous. There was a bit of slowdown between menus but this was negligible.

What I did have, though, were the occasional hard crashes or freezes on screen transitions. It wasn’t too detrimental, given the game autosaves quite often. Yet when you’re on a jolly old rampage, cutting swathes of enemies and closing in on the Warlock, it’s a bit of an immersion breaker.

Fortunately, my version has been patched since the game’s release, and it is improved. We were told of a few issues pre-launch, so it wasn’t completely unexpected or a “broken game”. Since the patch, I’ve had the odd blip or two but nothing that will stop me playing.

It’s worth remembering that this isn’t a first party game, that the occasional mishap will slip through. The only other issue that happened on occasion were framerate drops, sometimes into what felt like single digits. But then, if these are the only two negatives I can come up, that’s not a bad sign. Doesn’t help that the developer is called Glitch Factory though.

Let’s Go and Be Brave, Son

To conclude, I absolutely adore this game. But then, I felt like that the moment I saw the trailer. It ticks all the boxes for me: retro aesthetic, tough-and-frustrating-but-fair-combat, and the kind of witty storytelling that I can comprehend. Given the 2D/dungeon-crawler renaissance at the moment, what with the likes of Moonscars, Rogue Heroes and the like, games like this are more than welcome.

As I’ve mentioned in the references dotted about, this is a game right up my cartridge slot in terms of nostalgia. Even if you’ve only seen some of those mentioned, this might scratch that itch if you’re looking for something new.

A fantasy adventure with tough-but-fair combat, a well crafted story and a punchy pixel art aesthetic, No Place For Bravery is the next ‘must play’ game in the 2D/dungeon-crawler renaissance. While it’s still not perfect, the game is much more stable now that it has received a patch and despite a few spotty frame rates, this is an easy title to recommend.

No Place for Bravery is available now on Nintendo Switch (reviewed on Switch Lite) and PC via Steam.