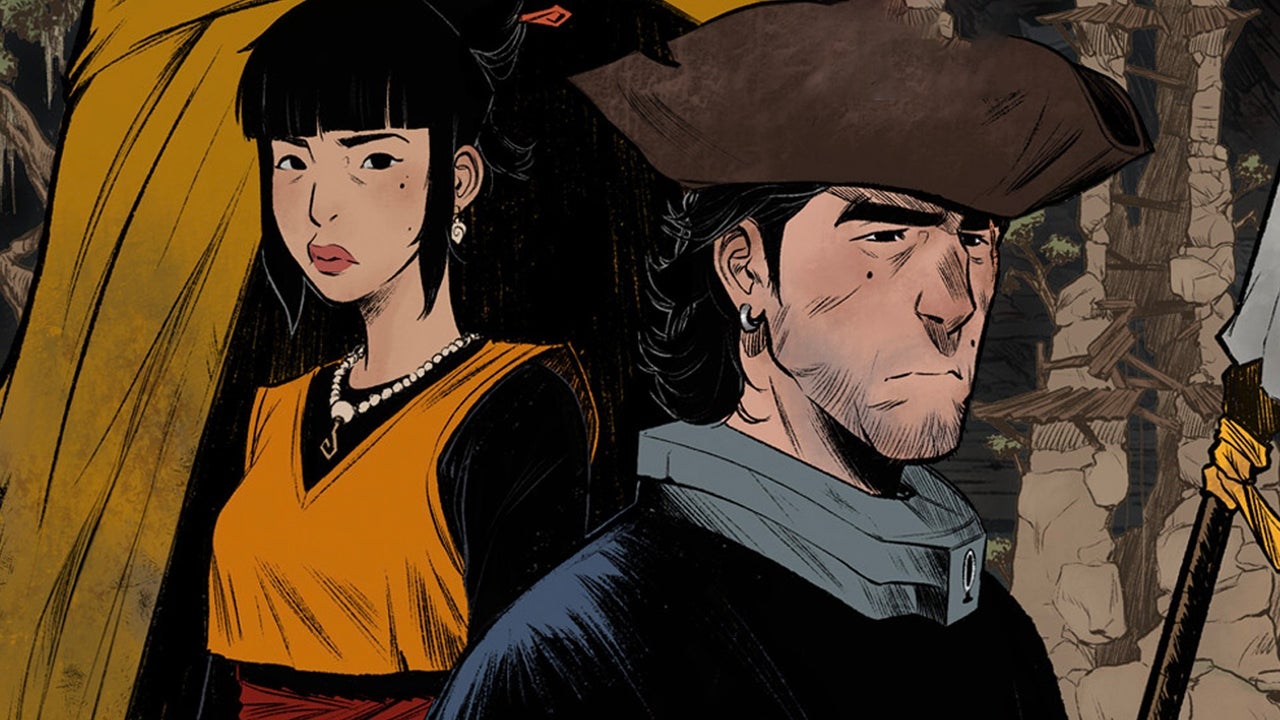 A minimal yet violent aesthetic, haunting soundtrack and no immediate idea what to do or what's happening. Yup, it's a Devolver game. The Finger Guns review:

Devolver Digital have a knack for publishing some weird and wonderful games. Hotline Miami, Katana Zero, My Friend Pedro are all pretty standard, but they like to dabble in weirdness too. It’s become a self-fulfilling prophecy, if you will, that something gets referred to as “a Devolver game”. Thus; Olija.

It fills an almost certain prerequisite for a title to be published by them. It’s got the minimal aesthetic, the eerie and haunting soundtrack, as well as a hyper-violent pixelated look going for it. Oh yes, this is peak Devolver: The Game.

Yet once you get past the superficially obvious, Olija becomes its own game, one of weirdness and oddly compelling narrative. Let’s batten down the hatches, or whatever sailors do, and find out why…

The story behind Olija starts off reminiscent of Another/Out of This World (as well as looking similar to it). You are Faraday, the lord of a poor and starving island, unable to even pay levies from previous wars. Fed up with seeing the struggle his people are going through, Faraday and a crew set sail for resources and food.

As is the nature of these things, it’s not long before tragedy strikes and our lord’s ship is ravaged by storms and sunk. Waking alone in the mysterious land of Terraphage, Faraday befriends a boatman who fills him in on events. Namely, that this land is a cursed place.

Faraday sets up a rudimentary home on a little isle named Oakdale, which acts as a hub base as the game progresses. From here, he and the boatman set sail to explore the various islands dotted about for resources, exposition, and means to figure out how to get back home.

Ye Cursed Lands. With The Little Accent Over The E.

The initial vibe that Olija gives off is similar to Shadow of the Colossus: these were once prosperous lands. There’s a sinister presence here, one the locals fear and are now subject to, even if they don’t exactly know what it is.

But Faraday, being a man on a mission, doesn’t want to resign himself to the same subjugation and sets out to prevent this. Well, at least I think he does. This is the problem with this kind of minimalism: you have to piece it together yourself.

Not long into the adventure, Faraday meets the titular Olija: held captive, once freed we realise she’s the princess to a local tribe. This tribe resents Faraday, for his is an outsider that they feel will doom the land even further. Of course, there are some justifiable reasons for there aggression: he is wielding a legendarily cursed item.

The cursed item in question, the harpoon, becomes Faraday’s main weapon in the game as well as plot device. No ordinary harpoon (besides the supposed curse), this one acts as a sort of nautical boomerang in both combat and exploration.

This is the meat of Olija’s gameplay, as the game opens up from linear dungeon progression to almost lateral puzzle thinker at times. A chasm may be a deterrent to some, but taking in your surroundings will reward you, as you work out you can harpoon to higher climbs. Better yet, some levers require the harpoon to be jammed into them to hold a door open, only to retrieve it when you’re through.

But Faraday is not just a one-trick pony, as an ever-increasing arsenal is made available the further you go.

Faraday is no slouch in the fighting department, which is handy as a good 80% of Olija is combat-based. As well as the cursed-yet-quite-handy harpoon, our hero picks up some considerable firepower along the way too. Initially a rapier for quick attacks, a bowgun and blunderbuss later become part of your arsenal.

Whilst it is easy enough to get through the majority of combat with just the harpoon. It’s also ideal in a pinch to create some space with your ‘buss. Or say an enemy is out of throwing distance, picking them off with the bowgun is handy if you’re saving health.

There are also boss fights, usually hinted at by ominous anterooms or creepy dialogue beforehand. Whilst they do boil down to “hit the thing with the sharp stick”, the variety in the bosses makes it entertaining enough. The evil presence, Rottenwood, makes up the bulk of fights with his constant, “I’ll get you next time, Gadget” behaviour, but he’s not alone.

Beauty In The Desolate

Despite Terraphage being a ruined land, there are some moments of beauty in the design here. The mind immediately draws to Hyper Light Drifter for comparison, as that too was a broken land spotted with stunning sights.

In fact, it’s what makes Olija an endearing game to play. The starkness of the world and the minimal hints as to what to do is what makes it great. I could spoil what your overall objective is, but that would be unfair. I said at the start it looks similar to Eric Chahi’s debut game, Another World, and that wasn’t a light comparison.

Graphically, Olija looks similar, in that pixelated/rotoscoped kind of way. Characters emote and gesture well enough to convey their intention, proving you don’t need redundant dialogue telling you of there every moment or mood. The dialogue, presented more in voiceover than conversation, is delivered in an unknown language, meaning you have to pay attention to it. There are no menu prompts or story recaps here.

It would be easy to decry pixel games as lazy, which is unfortunately shorthand for some. As I’ve played this alongside Cyber Shadow, I respect them both for what they’ve done with a limited visual palette. Whilst Shadow has gone one route of homage, Olija has gone another and are both equally impressive for it.

Save The World And Look Good Doing It

So far, it would seem that I’ve painted Olija as this drab, hipster kind of game. One of those ironic, “Oh you’ll only enjoy it if you like bleakness” type of affairs.

Far from it, it’s just that it’s really hard not to talk about the non-dreary bits without spoiling it. It’s what makes playing through the broken towns, shipwrecks and ruined sites worth it, to see the nicer areas. It’s just that the nicer areas tend to have story in them, hence the lack of spoiling.

What does also bring brightness and colour to proceedings though: hats! That’s right, a variety of stylish headwear that Faraday can craft for his adventures. When you’re rescuing captives and building Oakdale to a decent refuge, why wouldn’t you want to look good doing it?

Thankfully, it’s more than just aesthetic, as each hat brings a perk to it. Some are offensive, like adding lighting attacks or poison infliction to them, whilst others heal you marginally when you’ve done enough damage. It’s worth experimenting with, as there’s a hat to compliment each play style should you fancy.

See, even in broken lands, there’s still a hint of style to be found.

Our Lord And Sailor

Ultimately, Olija is going to get a glowing recommendation from me. Although I hate not being able to actually tell you what’s really going on; why Rottenwood is hell-bent, why Olija’s tribe hates you for most of the game, I don’t like falling back on that whole, “Oh you’ll just have to play it” attitude.

But unfortunately, this is one of those rare games when it pays to go in blind. Much like Hyper Light Drifter or Hotline Miami, going in knowing nothing pays off. And besides, it’s only a ten hour game with minimal sidetracking, you’re hardly going to be investing hundreds of hours.

On the surface, Olija is a puzzle/platformer with some fancy and brutal pixelated violence thrown in because it’s what Devolver publish. Once you dig a little deeper, though, you’ll see a decent if unoriginal story play out in a minimally presented yet captivating way. Much like Another World did back in the 90’s.

It won’t be for everyone, granted. Pixel games have garnered a somewhat hipster-ish caveat to them. But if you’re a fan of the label, and you like what they publish, then Olija is worthy of your time.

See, I keep my reviews thematic. This one was about as minimal as the game itself.

It may not look like much to begin with, but when Olija gets going it’s a captivating experience. Pixelated violence paired with the minimalism of its peers, it’s as worthy as any other game with Devolver’s blessing behind it.

Olija is available now on PlayStation 4 (reviewed on), Xbox One, Nintendo Switch and PC.