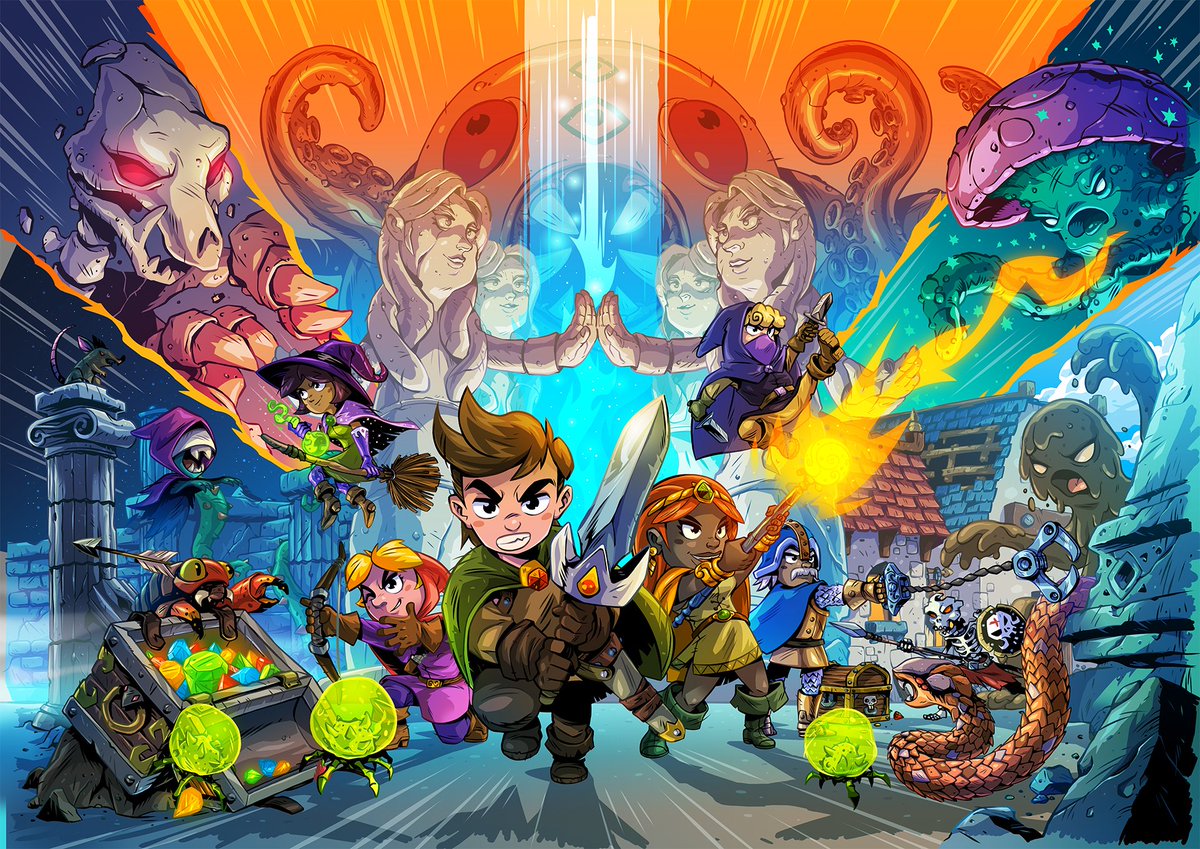 A roguelite that doesn't look to reinvent the wheel, Rogue Heroes proves the old "If it ain't broke..." idiom to a tee. The Finger Guns review:

Whenever I play a new roguelite/like, I’m always surprised at what new twist one can come up. For example, Returnal and Hades with their narrative delivery, or The Last Stand with its “dead man walking” style. Yet Rogue Heroes: Ruins of Tasos, surprisingly, doesn’t have a revolutionary gimmick.

It goes back to basics: here is a dungeon, throw yourself at it repeatedly until you get better at it. But whilst that sounds like a criticism, it’s instead a blessing to go back to something so simple in concept. Yet simple doesn’t mean easy, especially if you’re playing solo.

A pixel-based rogue from Team17, it looks basic from the offset. However, like the deep-diving and committed critic I am, I spent some time with Rogue Heroes and discovered a fair bit of depth to it. So come along, merry heroes, as we find out if this has the roguish charm or not.

Well, One of You Must Have Been Destined…

If you want to get the simplest aspect of Rogue Heroes out of the way first, let’s look at the story. As mentioned, rogue’s have come along in leaps and bounds regarding storytelling, but not here. Don’t expect any mythological spins or spacemen dreams, this is textbook early Final Fantasy/Legend of Zelda stuff.

The land of Tasos is in trouble, titans are holed up in dungeons and they need sorting out. Which means you, the destined hero, or your mates and/or online random, are to fell them. You, the player, are an avatar of one of many classes, that stays quiet throughout. I told you, it’s pretty simple.

Starting off in Intori village, various townsfolk are looking to you to save them from… well, apparent threat. They all seem pretty content to me. Oh, and whilst you’re at it, can you rebuild the town too? Yes, that is an actual thing, which we’ll look at in a bit.

My, What Big Dungeons You Have

The core gameplay of Rogue Heroes is as you would expect, given that “rogue” is literally in the title. Dungeons are procedurally generated, to an extent, and it’s up to the player to navigate the varying floors to get to the boss. The higher the floor, the higher the difficulty, as well as being able to skip them with a paid shortcut each time.

Keys need to be found to unlock doors, or the occasional block pushing puzzle comes up. Locked doors will be for progression or treasure room, so it helps to farm them. You have a mini-map highlighting where you’ve been, so that [hopefully] you won’t get lost.

As I say, it’s all very easy in practice. If you’ve played any early Zelda game (Link to the Past is my comparison), you’ll get it. But theory and practice are one thing; it’s the practical that you’ll have to get good at.

Fortunately, Rogue Heroes does offer a… well, a rogue’s gallery of classes to choose from. There’s your standard trifecta of warrior (that I went for), archer and mage, but that’s not all. It then gets a bit exotic with nimble-but-weak thieves, tank-like knights and broom-wielding witches. But that’s not all: each class has its own unique talent.

The Hero/warrior gets a Pegasus Boot-style charge, the witch can use her broom to fly over traps, whilst the Reaper class can combust, float away and reconstruct themselves. They all take a bit of experimenting with, proving the right combination in a team can make a formidable dungeon-demolishing squad.

I, for the most part, only played solo (not through lack of trying). As I went Hero, that’s where a lot of my Zelda references come from. Not that that’s a bad thing by any stretch of the imagination, it was just all I had. But to use Zelda once more, it’s the items that set the tone for progression.

What makes this dungeon crawler somewhat linear are the extra weapons you pick up along the way. Like Link’s arsenal, there are bows, bombs and hookshots. As I said, the references are about, but you know what they say about flattery. However, there’s a catch.

Picking up one of the aforementioned will only manifest in glass form. Oh it works, there’s no handicap there. But when you die, it [inevitably] shatters, and you can’t leave a dungeon without finishing it. Death or glory and all that. So how do you progress to the next story area?

Well, in the case of the first dungeon, you find the “proper” hookshot near the end. There’s no skipping dungeons here, fellow adventurers. The other catch is you give up all your current gems on entry, but keep them on death. So the incentive to horde disappears, making it worth spending them on your town and losing some, rather than lose hundreds. In fact, the Stardew Valley/Animal Crossing element actually works in your favour.

The Town That Grind Built

The old idiom of “You can’t spend it when you’re dead” is somewhat applied here, loosely. It’s more “You can’t take it with you”, so you might as well use it. The problem is that upgrades aren’t cheap, especially after dropping a few hundred to buy the shop/smith/centre in the first place.

So, grind. Grind, die, spend, in that order. You may find that you’re throwing yourself at a dungeon quite a few times, especially single player, but it pays off. Quite literally, as even the shortest of runs can yield a few hundred shiny things.

This is the quintessential essence of rogue gameplay, so don’t expect a quick run through a dungeon on the first couple of attempts. But it’s not bad, rather the opposite. It gets annoying to be killed by a sneaky floor trap, but it spurs you on to do it again but better.

To conclude, I couldn’t really find any fault with Rogue Heroes. The graphics are retro but updated for modern fluidity and style. The combat is responsive, with a grind that encourages players to keep throwing themselves at it until they get better. You know, like “proper” video games should.

My own personal grumble was that I had to do it solo, as the few times I ever managed to get online were short lived. Lobbies are underpopulated, which I suppose is a downfall for a niche little game. If you’ve got some real friends to play this with then take that advantage, as it works well with a team.

Is it groundbreaking, subverting the “hero saves the day” trope we’ve had from early Zelda’s and Final Fantasy’s? Absolutely not, but sometimes we just want something that takes us back, with some modern flair and does it again really well. Will I go keep my Hero or maybe switch it up with another class in a bit? Who knows, but Rogue Heroes is accommodating enough for those that want to try.

Offering a fine balance of easy-to-play and dungeon challenge attitude, Rogue Heroes: Ruins of Tasos is an enticing game for all comers. It’s not doing anything new or particularly original with its story, in fact using elements of classic games, but that’s not a bad thing. Sometimes it’s nice to get lost in some new-age nostalgia, even more so with friends.