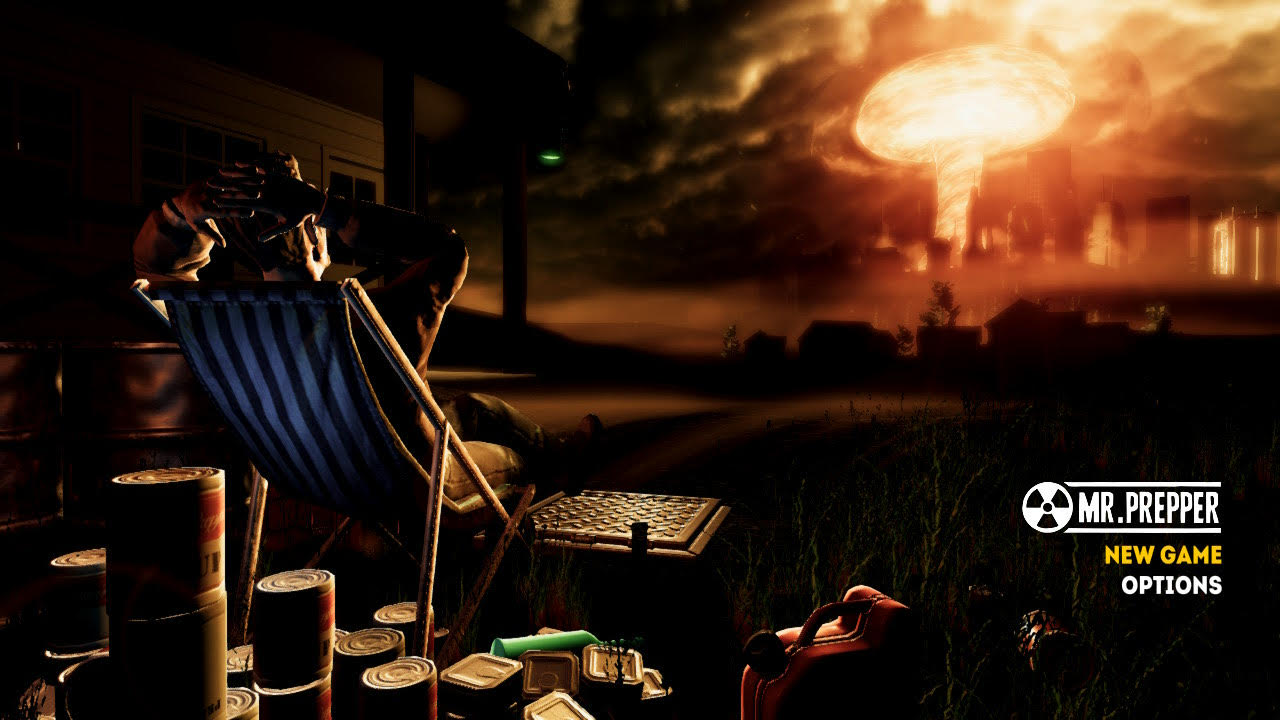 Already out on PS4, Xbox and PC, Mr. Prepper makes its way on to Nintendo Switch, but how does it fare? The Finger Guns review:

Already out on PS4, Xbox and PC, Mr. Prepper makes its way on to Nintendo Switch, but how does it fare? The Finger Guns review:

My first glance of the main menu for Mr. Prepper instantly brought me back to another bunker-filled apocalypse imminent game, Fallout Shelter. Whilst I’m not met with the same distinct retro-futuristic art style, both games evoke the same feeling. The titular Mr. Prepper is sat back in his beach chair looking onwards at a nuclear explosion devastating the city. With cans of off-brand Campbell Soup stacked besides him, he’s ready for the nuclear fallout. But are you?

How Deep the Rabbit Hole Goes

In this game you play as Mr. Prepper, a self-proclaimed “constructor” to his townsfolk of ‘Murricaville, a possibly too-on-the-nose depiction of a dystopian America. You meet this sad Sam Lake’s Max Payne lookalike after his first unsuccessful escape from the Government. Plopped back on your doorstep, he’s warned to be a model citizen. However, this isn’t enough to dissuade Prepper as he knows something is going on and he wants nothing to do with it.

Building a bunker and escaping are Steps 1 and 2 of his Ultimate Plan. You don’t question the motivations as the game does a good job on selling the fact that Mr. Prepper isn’t just a crazy person by the opening cut scene. After a few hours you’re met with strange visits from your neighbours – who look like Batman’s Joker has given them laughing gas – as well as questionable headlines in the news of Postmen unexpectedly going missing. You really sense that something ominous is under-foot. This unsettling environmental story telling hooked me into delving deeper into the bunker, although not by much.

Dialogue from Quest Givers and NPCS are serviceable to further the plot and tone but the lack of nuance or reading between the lines makes for a quickly skippable feature. The developers wear their influences on their sleeves, with references to Fallout and Terminator to name a few. If you’re going to imitate you might as well imitate from the best. Whilst the art direction is very basic and not much of a pretty sight, it still manages to carve out its own space to separate itself from other indie survivor titles.

Some of Those Who Work Forces

The game plays as a 2D survival, resource management sim. The main hub is your home where you’ll begin to build your bunker. As you acquaint yourself with the NPCs, areas open up and act as “dungeon-like” areas. In these levels you can find tools to survive such as animals to trap or hunt, materials to gather or fruit to pick. Threats can loom in these areas where you’ll enter laughably bad combat scenarios. You tap on the aggressive wild life to thwack it to death and tap away to “dodge” their attacks or block. I couldn’t even say the combat is archaic as history has shown otherwise, instead it’s just poor.

The level designs are uninspired as it’s just a case of left and right and the occasional up to progress further or down to go back. I found myself scrolling all the way to one side double tapping to get Prepper to run where I’ve pointed and waiting for him to play catch up with my directions. It got frustrating quickly when you just want to go home and “Bless the President”.

I Fought the Law…

The Government are portrayed to be a hugely oppressive figure in Mr Prepper as their actions grow ever most suspicious during their scheduled visits. Things such as items going missing in your home too fast are a cause for concern, and letting them see your hatch to your humble underground abode is illegal, resulting in a fail state. This provides a tension in the game that ends up quickly falling flat as the pretty simple rules are laid out early on, it’s just a case of hiding your bunker and chalkboard so that the Agent surveying won’t even bat an eye.

Instead, the real oppressive force in the game are the clunky controls. They feel like it gives major push back when trying to do the most remedial task of just placing an item. In one instance I couldn’t even apply a lamp light to the wall above the Workbench inside the bunker, things like this became stale quickly and instead of learning to work with the game I felt like I was making a compromise each turn.

I tried both handheld and docked when playing and I found to enjoy the docked experience a bit more. As the game loads, tips pop up. One of these is that you can play the game with the touchscreen, but the unique to Switch feature didn’t bare any great results. You’re either zoomed in too much or too little and with the menus being the size they are and unless you have child sized fingers, you may just dump a bag of sugar all over your Living Room floor.

The aforementioned workbench is where you’ll spend a bulk of your time when building out your bunker. Like most base building survival experiences, you start from the bottom and upgrade your way up as you progress bit by bit. This was the biggest draw whilst playing. Being able to get through one of the days knowing you’re a step closer to the ultimate goal is the carrot dangling in front of you that’s ever so enticing. These systems are deep and satisfying enough that it makes you feel rewarded. The quests tied to the core gameplay are never daunting and scale through your experience. Which I’ve found to often make or break a game.

The game operates on a day and night cycle. You have to plan on how many tasks you can complete through the day. This is coupled with your hunger and energy meter. The two culminate into an overarching meter that lends to a ‘preparedness’ meter. In the tutorial it explains that your preparedness is affected when you’re lacking in sleep and food, if those bars fall below 50% it’ll degrade over time making actions become harder to pull off. I didn’t experience the changes that was mentioned in the game when the bar went low, though I did find myself using way more of my time micro-managing my health rather than getting on with the task at hand. With the micro-managing of time, health and resources it really felt like there wasn’t enough time in the day to do much effectively. A notion too close to home, am I right?

Some days you feel like you’ve made real headway into your story progression to the detriment of your overall health. This can end up becoming quite difficult to restore. I think this maybe falls more onto me as a player not min-maxing my time enough, but I can’t help that it feels more like a chore than a challenge.

The End of the World… Or Maybe Just This Review

If I could take anything away from playing this, it’s that I knew exactly what Rejected Games were aiming for. As Miles had mentioned in his review earlier this year, it mustn’t have been an easy port to consoles, and the Switch doesn’t fare much better either with its own limitations and capabilities – though it’s commendable to try and reach a bigger audience as there are things to enjoy for fans of the genre. This feels like a PC Game that’ll accrue a cult following for its satisfying and layered mechanics despite its rough exterior.

It may be one that I’ll jump back into every now and then to try different ways to accomplish Prepper’s Ultimate Plan. The game requires patience with how it plays whilst also rushing to get as much done, which has been a bizarre experience. I liked the world it presented. The questions I wanted answering were being drip fed at an intoxicatingly addictive pace, but that work in between left me with more to be desired.

Mr. Prepper fulfils the bunker survival simulator competently. The personal Cold War I was having with the way it controls and the treaties I wanted to break for it being so pedantic – even on the Switch – left a lot to be desired however. If this genre is of interest and you own a Switch you may be able to enjoy what it has to offer, warts and all.