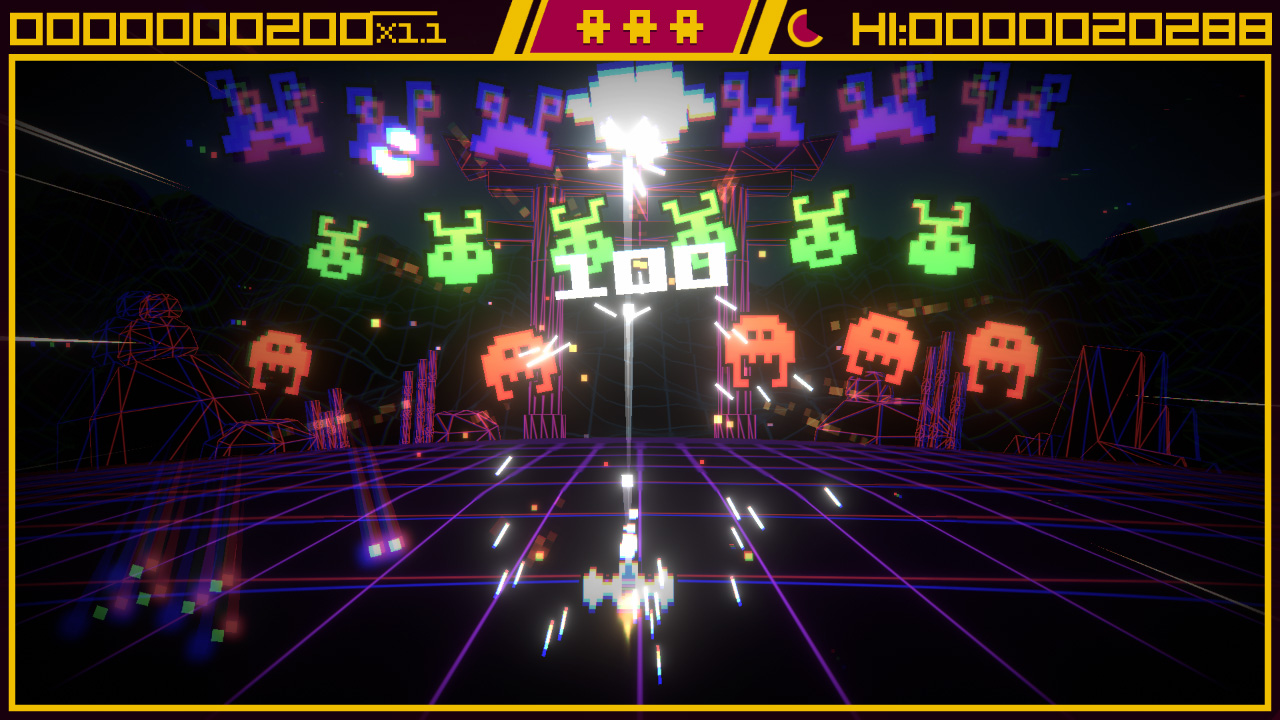 Despite being a more varied and enjoyable outing for the series, Super Destronaut DX-2 is still lacking innovation in a crowded genre. The Finger Guns Review.

Despite being a more varied and enjoyable outing for the series, Super Destronaut DX-2 is still lacking innovation in a crowded genre. The Finger Guns Review.

If there’s one thing you can say about Petite Games it’s that they know how to reuse and recycle their assets in innovative ways. This is the team that took the art from the frankly poor platformer 36 Fragments of Midnight and created a pleasant 2D physics golf game in the shape of Midnight Deluxe. In 2018, they released Super Destronauts DX, a shallow clone of Space Invaders. They then reinvented the series as a FPS using the same art in 2020’s Super Destronaut: Land Wars. That very same art returns for Super Destronaut DX-2, a shmup which is much better than the original but again lacks depth or invention.

At first glance Super Destronaut DX-2 looks like a knock off version of Space Invaders, much like the original game. Pixelated alien ships filter onto the screen in various formations. The aim is to destroy them with laser fire blasted up the screen from the player controlled ship. These aliens all have their own offensive capabilities and will attempt to destroy the player by firing at them. Destroy aliens quickly and steadily without taking damage and you’ll build up a combo meter, which multiplies your score. UFO’s will appear at the top of the screen and if you manage to destroy they, they’ll drop weapon pick ups. With 2X, that’s where the similarities with Taito’s classic shooter series ends.

Unlike the original Super Destronaut game, the player controlled ship isn’t restricted to the bottom fifth of the screen. Here, the ship here can move all over the screen, more akin to Twin Bee than Space Invaders. This change allows DX-2 to do some more interesting things with the game play. For a start, the alien ships don’t just enter from the top of the screen in Super Destronaut DX-2. They’ll occasionally enter the screen from the bottom with some arrows warning the player before they attack. This also means that the aliens can loop through the screen, descending through the lower screen border to attack again from the top.

The 3D aspect of the original, with aliens approaching the screen from the background, doesn’t return for Super Destronaut DX-2. This was the most innovative aspect of the first entry in this series but added little to the overall experience. One element of originality from DX does make a return for DX-2; Occasionally, one of the alien ships will fall from the formation after blasted, becoming invulnerable as they descend. This adds another obstacle to avoid and while it’s not revolutionising the genre, it does make the game a touch more challenging.

The moment to moment game play of Super Destronaut DX-2 isn’t the only aspect of this game that has been overhaled since the last title. The play modes have been completely redesigned, despite the fact that some come with the same name. Challenge mode returns but rather than just being a plethora of different ways to say “shoot stuff”, the 30 levels here push the player to play differently in each test. Bigger enemies, more aggressive foes, smaller bullets, limited bullets and restricted time are just some of the different level mutations the game throws at the player. It’s much more interesting than the mode with the same name from the original SD DX.

Super Destronaut DX-2 has an additional 5 arcade modes. The classic 3 life mode is included, as is a time attack which asks the player to score as many points as possible before the clock hits zero. There’s also a hardcore mode which is much like the classic mode only with much more aggressive enemies that are harder to destroy. The remaining 2 modes are much more original. There’s a bullet mode which limits the ammo available to the player, rewarding more for every wave of aliens defeated. Then there’s a time rush mode where a clock ticks down but can be extended for each vanquished wave. While it’s more than the original game, even with these modes, there’s not a vast amount of content here. After an hour of play, you’ll have seen everything this game has to offer. Alien waves start to become repetitive. Any further longevity is dependent on how much you like high score chasing.

The neon tinged, retro game aesthetic of Super Destronaut DX-2 is one aspect of the original I’m glad to see return here. Wire frame scenes flow along as the game plays in a Tron-esque foreground. The visual effects have certainly stepped up for this game too. The sparks that fly off each laser blast that hits a target are visually impressive. In fact, when you’re really hammering the aliens, it’s almost too distracting. The only times I’ve lost a life while playing this game is where enemy fire has been camouflaged behind a curtain of sparks generated by my own shots.

I have to complement the soundtrack for this title too. Toe tapping synth wave tracks are present and correct, supplementing the 80’s inspired visuals nicely.

As is almost tradition for a game published by Ratalaika, this title comes complete with an easy to obtain Platinum trophy. Unlike some PS4/PS5 games that have released recently that are just a few Unity assets strung together and a Platinum trophy attached (I’m looking at you Funny Truck), it feels like Super Destronaut DX-2 is more game, less purchasable trophy level padding. I’m not ashamed to say that I unlocked all the trophies for this game. That was something that happened by accident however. I was simply having a pretty good time with the game and managed to rack up enough points to unlock all the trophies I needed.

Super Destronaut DX-2 is most definitely a step forward for this series. Outside of the art style, any attempt to emulate Space Invaders has been dropped. This title feels much more like its own game rather than a clone of something much more charismatic, successful and pleasurable to play. There’s still room for improvement if there’s to be a Super Destronaut 3X however. There needs to be better balance with the visual effects, include more than a few hours of content and it’s going to need to expand its game play scope to match the innovative modern day peers in this genre. At best, Super Destronaut DX-2 is just above average in a crowded genre that’s moving ever forward. If the developers want to elevate this series out of the valley of mediocrity, they’ll need to innovate.

Or maybe that’s not what Petite Games/Ratalaika are aiming for. If they’re attempting to churn out easily consumable budget titles that are similar to any number of other games out there but can entertain for a few hours and attract trophy hunters, they’ve succeeded here.

A much better shoot-’em-up than the first game in this series, Super Destronaut DX-2 looks like Space Invaders and plays like Twin Bee. It only has a few hours of content but there’s enough variety here so that those hours feel like they’re well spent. Score chasers might find some longevity but there are much better titles in this genre to spend your time with.