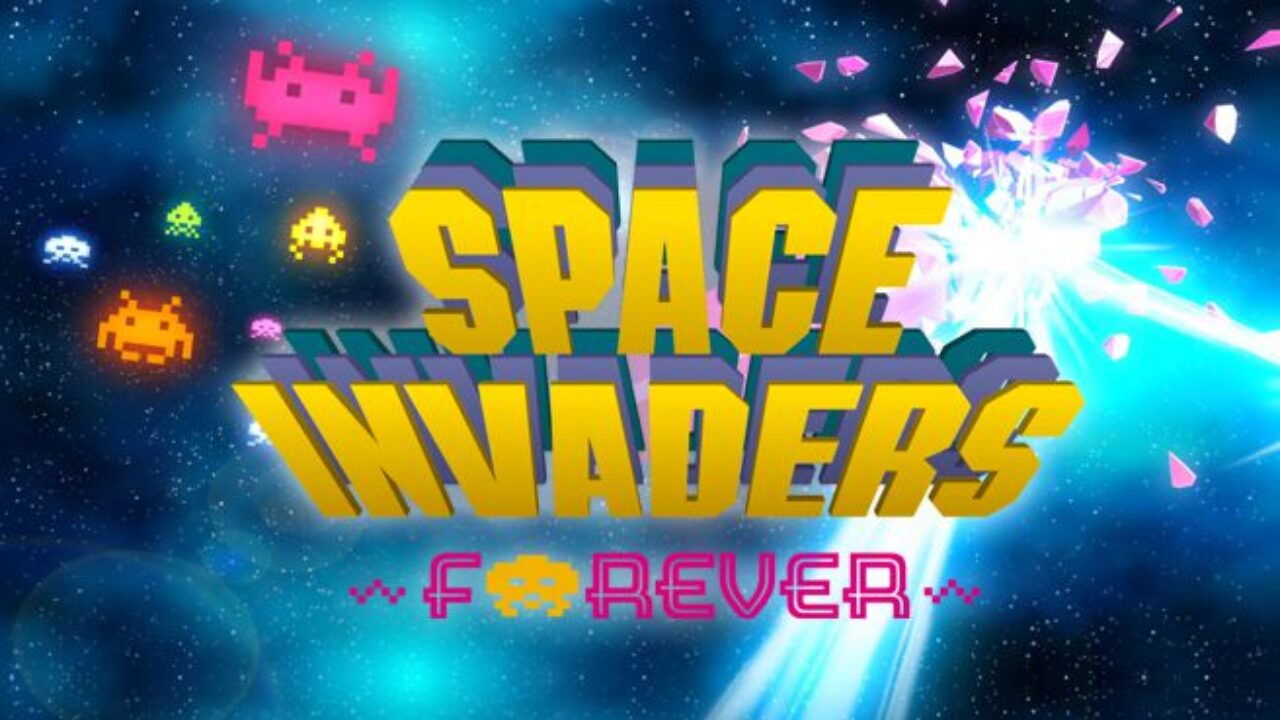 When you think of Space Invaders, you probably imagine the classic variety. The descending aliens, methodically shuffling down the screen line after line. The lasers that can only fire again once the previous shot has landed/left the screen, demanding accuracy from the player. The teasing UFO’s which award big points but can mess up a strategy. It’s a formula that’s 30 years old but is still as entertaining today as it was back in 1978. Many teams have been inspired by, tried to clone and even attempted to evolve the formula over the years but none have been as successful as original developers Taito. There’s now more than 40 different versions of Space Invaders including crossover’s with Pac Man & Ultraman and new genre versions including Pinball and rhythm games. This new title – Space Invaders Forever – celebrates 3 of the most innovative from the bunch by bundling them together. There’s a few caveats however…

The oldest and greatest game in this collection is Space Invaders Extreme. Originally released for the PSP and Nintendo DS back in 2008, the game was ported to Xbox with some additional visualizer backgrounds (created by industry legend Jeff Minter) and new multiplayer modes. The version here is a port of the PC version that was released in 2018. This includes the new backgrounds but lacks the multiplayer modes that were added for the Xbox version.

The concept for Space Invaders Extreme is the same as the original but there’s a more modern day arcade game feel to the way it does things. The alien craft spawn on the screen and the player cannon, which can only move laterally along the bottom of the screen, shoots them down. Where Extreme differs from the original is that the design tenets are broadened, moving from wave survival to high score chasing, and it’s played at a much more rapid pace.

Extreme is made up of 11 different stages, each of which contains different waves to defeat and a boss battle waiting at the end. There’s 5 end points to the arcade mode which heads in different paths depending on the score achieved at each stage.

In each level, the waves spawn above in a formation and can be shot down using the standard blaster but there’s also power ups that can be spawned by shooting 4 of the same colour alien craft in a row. Lasers, bombs, multi-shot and shields can be dropped from the enemies if shot in the correct order. These can tear through a wave in seconds but some enemies have countermeasures in the shape of shields and mirrors. Blast away each ship and you’ll move onto the next wave. Do so quickly and you’ll rack up points with chains and increased rates.

One of the bigger innovations with Extreme is the inclusion of Bonus Rounds and Fever Time. If the player manages to destroy 2 sets of 4 matching coloured ships back to back, a UFO will travel across the screen. Destroy this UFO and the player will trigger a Bonus Round. Here you’re given an objective to complete like destroying X number of ships in a few seconds or collecting X number of items falling down the screen. If you succeed with this objective, you’ll be returned to the original wave but with Fever activated. This is a prolonged period with one of the weapon power ups active to really go to town on the invaders.

The best aspect of Space Invaders Extreme is the boss battles. At the end of each of the 11 levels, you come up against a giant ship which can take the form of a battle of survival or a battle puzzle to navigate. One of these is a ship that rains down laser rain all across the level while another is a ship that’s shielded from the bottom and requires some pinpoint accuracy and ingenuity to defeat.

All of this is presented in a hypnotic, fast paced barrage of colours alongside an electric dance track that’s among the best in the arcade genre. This is where Space Invaders Extreme is the most unique among the other Space Invaders titles. Extreme is to Space Invaders as Tetris Effect is for Tetris. Laser blasts have a unique sound effect per level which matches the backing track turning this into an experience as much as it is an arcade game.

Of the 3 games presented in Space Invaders Forever, Extreme is the most well rounded, content filled, exciting and innovative. It’s a crying shame then that the multiplayer modes are missing here.

Co-operative play isn’t something synonymous with Space Invaders but Gigamax 4 SE is a game that’s built around it. Each of the upto 4 player’s controls their own cannon and moves them along the lateral defensive line as per usual. The way Gigamax differentiates itself from the other games is that after the initial traditional wave of descending waves (admittedly, much wider than usual to accommodate 4 players), the game throws some new wave types at the player.

During the second wave, alien ships descend onto the screen and then patrol left and right across the screen, getting ever lower as they do so. When these ships are hit with a cannon blast, they grow in size. It takes a few shots, these alien craft growing ever larger as they do so, before they explode. It’s impossible to defeat all of these craft before this round ends and the final 3rd round begins.

This final round is a boss battle where cooperation comes to the forefront. This boss comes in the shape of a massive UFO that fills half the screen and it has different abilities in each of the 3 times you face it. Alone, each player cannon can fire off a slim laser but if these cannon’s come together, they’re able to fire off a blast with ever increasing potency. Pull 2 players together, positioning them next to one another, and you’ll give off a blast x10 times the power of a normal blast. That’s multiplied exponentially with the number of players combining with one another. This is a fun game to play with friends as there’s no real game over screen and instead, you’re competing to have the highest score while collaborating in defeating the boss.

Space Invaders Gigamax 4 SE is a game designed around cooperation in those boss battles which means that when played in single player, this game can be a trudge. Having only the capacity to fire off a single player blast results in drawn out boss fights that stop being fun long before they’re over. This isn’t a long game either. It lasts for about half an hour at its longest. With friends, there’s competitive reasons to replay the game more than once but in single player, there’s no reason to play it again.

I believe that Space Invaders Forever is the only way to play Space Invaders Gigamax 4 SE on console and while it’s not exactly an essential game in the series, fans who wanted to play it but didn’t get the chance when it was at the limited time event can experience it here.

The last game in the Space Invaders Forever collection is a combination of multiple classic Taito franchises. Arkanoid, the block breaking classic that rivaled Atari’s Breakout back in the 80’s, is combined with Space Invaders and a sprinkling of cameo’s from other Taito characters from the likes of Bubble Bobble, Darius and The Ninja Warriors. This game was originally released on mobile platforms back in 2017 but don’t let that put you off. This was a paid title rather than a free-to-play game so there’s no ugly freemium games design or obvious removal of microtransactions here.

In Arkanoid vs. Space Invaders, you play as a cast of heroic characters, each of which have their own special abilities. With a horizontal pane on the screen down the center, this forms the game play area. Much like in Arkanoid, the idea in this game is to protect the lower part of the screen using the Vaus (the paddle which bounces things that hit it back upwards). The kicker here is that it isn’t just a ball like the Arkanoid games. It’s the laser fire from the Space Invaders that are in the play area too. The aim of each of the game’s 150 rounds (which can be played on 2 difficulty settings) is to rebound the fire power sent down the screen to destroy the blocks and Space Invaders above in a set time period.

This game diverts from the traditional Arkanoid formula in a pretty unique way too. Rather than only being able to move the Vaus left and right along a vertical bar, the ship can move anywhere within the bottom segment of the screen. This allows for some interesting moves where instead of simply rebounding things back up the screen, you can force them up with some power, triggering some glowing ability which does more damage to blocks and alien craft.

Lastly, there are special abilities that can be triggered once an attack gauge has been filled. These are unique to the character you’ve chosen from those unlocked. Some make the Vaus longer. Other’s add a homing effect to anything reflected from the paddle. It’s a cool addition which gives the game a little added depth.

Obviously, being a mobile title that used a touch screen as a control method would usually cause a bit of an issue when porting to consoles. There’s a pretty ingenious way that Space Invaders Forever negates that problem on PS4/PS5. Using the touchpad on the Dualshock 4/DualSense controller, you move the Vaus around the play area with a finger touch. It’s a pretty imaginative solution and feels like a great use of the controller.

The adverse effect of this is that Arkanoid vs. Space Invaders feels far easier on the PS4 than it did on mobile. Maybe a little too easy. Because you’re not controlling the ship on a screen where your finger can get in the way, the challenge doesn’t feel as steep.

Regardless of the decreased challenge, Arkanoid vs. Space Invaders is still a lot of fun to play. The narrative is a little trite but as this was originally designed around the pick up and play nature of mobile gaming, that has to be expected. The level design makes up for much of what is missing there with some lovely formations to smash your way through. The combination of block smashing and often moving Space Invaders makes for an inspired combination.

A trio of twists on a classic, Space Invaders Forever brings together 3 inventive titles that can fill an evening with friends or a weekend score chasing alone. There’s caveats with all 3 games that long time fans will need to consider before purchasing but if you’re simply looking for a Space Invaders fix with a difference, this is the game for you.

Space Invaders Forever is available now on PS4 (reviewed on a PS4) and Nintendo Switch.