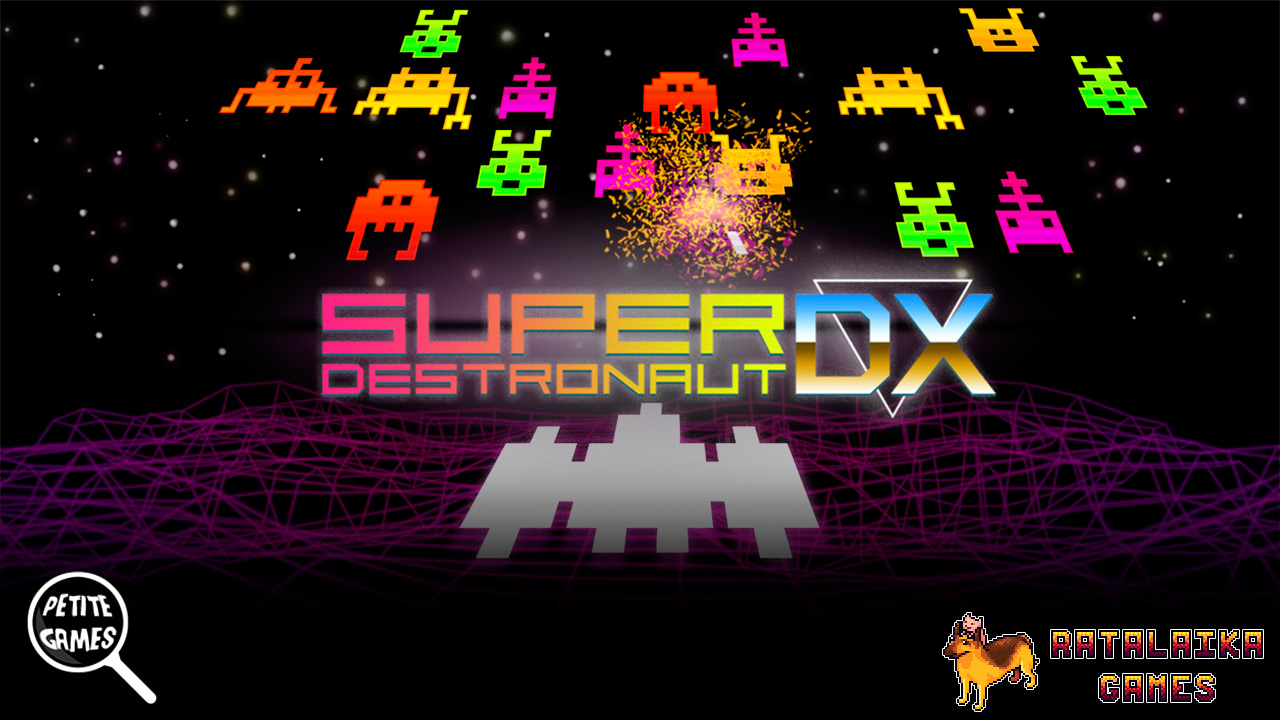 Revitalising a retro gem for modern day audiences isn’t easy. The recent Bubsy revival is testament to that. Still, that’s the task that developers Petite Games (the team behind InkSplosion, 36 Fragments of Midnight and Midnight Deluxe) have set out for themselves with Super Destronaut DX, a game that’s taking the principles of Space Invaders and is trying to give them a modern day twist.

Much like Space Invaders, each match of Super Destronaut DX begins with a wave of enemy aliens patrolling the top of the screen and your own ship moving across the bottom plane. You shoot up at the aliens, moving left and right while avoiding the shots that the aliens are raining down on you. The main difference between Super Destronaut DX and Space Invaders is that the aliens never leave the top of the screen. They don’t proceed any further down the screen the longer they’re alive and they don’t get faster. Instead, this game is about racking up high scores by defeating wave after wave of aliens which respawn each time you destroy them all, adding to your multiplayer with each successful alien destroyed. To add to this subtle difference, on occasion an alien ship, when destroyed, will fall downwards still offering a hazard should they hit you but offers you more points if you shoot them as they descend. On top of this, you’re occasionally granted power-ups which change your weapon to missiles, bombs, triple shots and more when you destroy a special red enemy. The last difference is that Super Destronaut DX adds a 3 dimensional element to the typical 2D gameplay by having invulnerable enemies panning from the background to the players foreground plane meaning that while you’re fighting off the enemies above you, you’ve also got to be careful of those barring your movement.

All blended together, these changes make for a fun, modern take on Space Invaders. There’s nothing new here (Puppy Games got in their first with much of this with Titan Attacks) but this is the first time this has all been wrapped up in a single package. It’s fast fun but unfortunately, Super Destronaut DX lacks any longevity.

Super Destronaut DX is a one trick pony. Once you’ve played a single round of the game in any of the game modes, you’ve seen everything it has to offer. The various alien types cycle in and out but there’s only a handful of formations that they make. Despite the fact that the game has 5 different modes, they’re all virtually the same. Even the Challenge mode, which gives you criteria to hit per test, is nothing more than an playing the same game modes you’ve played elsewhere but in smaller bursts. Everything this game does hinges on its one type of play – shoot the aliens, score points, avoid dying – and the game fails to offer any variety beyond that.

Visually, this title offers a clean and colourful retro inspired aesthetic but it’s hardly a step up from the source material from which it takes its inspiration. As for the audio, there’s a perfectly fine chip tune soundtrack that adequate backs the entire experience while falling short of really providing a ear worm to tap your foot along too. There are some lacklustre vocal sound bites when you unlock power-up’s which made me laugh out loud on the first time of hearing them. They lack the grandiose nature you’d expect to accompany the unlock of missiles or bombs, going in a gentile nature instead. This is akin to watching an ASMR YouTuber whisper “Uzi…Machete…Bazooka”. Frankly, a little odd.

Super Destronaut DX publisher Ratalaika Games know their audience well by this point. Small games with some mild innovations, a small price tag and, the hook, an easy Platinum trophy. That’s what this game provides. There’s an hour or 2 of fun to be had and the small price tag means you probably won’t feel hard done by when the game runs out of things for you to do very quickly. While the innovations Super Destronaut DX bring to the Space Invaders formula are welcome, they don’t go far enough to really bring depth to the package. If you’re looking for a quick boost to your PS4/Vita trophy count, there’s a 30 minute Platinum trophy waiting for you here, otherwise, I’d just stick with the original and best Space Invaders.

Super Destronaut DX is available now on PC, PS4 (reviewed on base PS4), PSVita, Nintendo Switch and Xbox One.

Disclaimer: In order to complete this review, we purchased a copy of the game. For more information, please see our review policy.