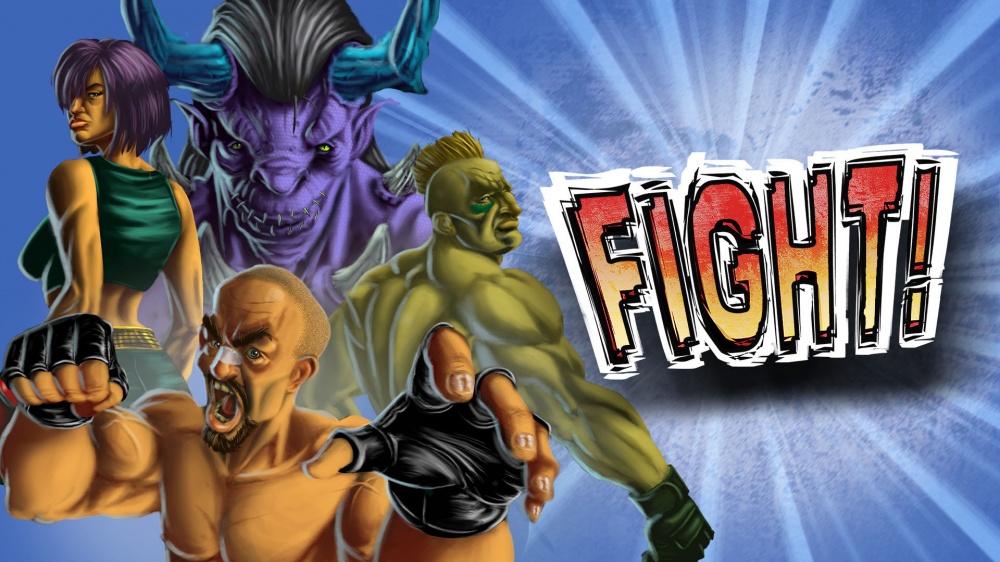 A bare bones brawler that lacks anything resembling enjoyable game play, Fight is another flaccid jab by Sabec. The Finger Guns Review.

A bare bones brawler that lacks anything resembling enjoyable game play, Fight is another flaccid jab by Sabec. The Finger Guns Review.

I should have known that Fight was a game from Sabec Interactive simply by the name. At this point, it’s their modus operandi. All of their games have names that would make Ronseal proud. They do exactly what they say on the tin. Golf, Chess, Bowling, Hunt, Table Tennis, Air Hockey – the list goes on and for whatever inexplicable reason, my kids seem drawn to them. The fault lies at my feet for buying Fight though. I had a few quid left in my PSN wallet and the key art for this game hints at something deeper. I bought it on a whim. I should have known better.

Fight is a 1 vs 1 fighting game in the same vein as Mortal Kombat. Each combatant starts at either side of the screen and it’s the first to beat all of the health out of the other’s life bar by landing blows on their opponent who wins. Every match is a first to 2/best of 3 set up, like you might be accustomed to. Don’t allow my comparison to Mortal Kombat to raise your expectations however. Outside of the structure and tone, this game isn’t a patch on NetherRealm’s games. Fight couldn’t last a round in the ring with any of its peers.

On first impressions, I certainly thought Fight would finally be a Sabec game I could enjoy. It begins with a pumping industrial soundtrack and that same enticing key art behind a slick looking menu. My hopes rose again when I clicked through to Arcade mode – a match against a CPU opponent – and was greeted by a roster of fighters 15 strong. Each fighter has a differing visual appeal but a handful look like pound shop versions of existing characters, one in particular looking like an off-brand Raiden – but I was still hopeful. Those first impressions were punched in the face and kneed in the groin the second I entered my first fight.

Each combatant in Fight has 6 attacks – a straight punch, another straight punch that looks identical to the first, a high kick, a mid-kick while stood and while crouched, an uppercut and a low kick. Holding L2 or R2 while moving left and right triggers a quick little shimmy too. There’s no jumping here so no aerial versions of any of the attacks. This wouldn’t be the first time a game kept fighters grounded so that’s not so much of a deal breaker.

There is however 2 massive missing components. The first is any type of block. There is no way to block an incoming attack in Fight and it’s quite incredible what a turgid mess this turns the game into. Instead of timing attacks or having any strategy, the game turns into a button masher with no strategy as each attack interrupts the stiff and frankly poor attack animations from your opponent or vice versa. This isn’t nuanced fighting with minimal inputs like Divekick. It’s just a slapping match with a singular tactic – press random buttons and hope the hit lands.

The second missing component is combos or special moves. The 6 moves listed above are the only 6 moves in the game and there’s only one attack – the straight punch – which will combine with itself to form a flowing attack of 3 jabs. Everything else is just a singular attack manoeuvre which has no follow up. What’s more, those 6 moves are the same for every single fighter in Fight. Every single one of the 15 combatants have the same move list, animated in exactly the same way. Having 15 fighters in a game is completely pointless if they all play in exactly the same way.

The more you play Fight, the more you start to see flaws. The versus mode which should be player vs player doesn’t require a second controller to access, so it’s perfectly feasible to play the game against a non-responsive player 2 that doesn’t exist (I actually thought it was mandatory for local  multiplayer games to include 2 player access to pass certification but obviously not). Why exactly you’d want to play against a non-existent human  beyond quickly unlocking the poultry trophy list (there’s no Plat here) is anyone’s guess.

In total there’s 4 modes in Fight and they’re all skin deep. The Arcade mode, as previously mentioned, is a single match player vs CPU match. This can be played in 3 difficulties – Easy to Hard – but changing this doesn’t actually change the way the CPU behaves. Instead, it increases the damage they do per hit they land on the player. Without a block button, the Hard mode is a crapshoot. There’s a training mode too where both player and AI opponent have infinite health which, in theory, should allow the player to practice their moves. This mode is entirely redundant because there’s only 6 moves in the game, there’s only 1 combo and no specials to learn.

The final mode is called Survival. Here you fight through randomly selected brawlers from the Fight roster which increase in difficulty with each victory. At least in theory. In practice, it doesn’t feel like the difficulty increases at all. I managed to get to 21 victories before I got bored and exited the mode.

The reason I was able to rack up so many victories is because there feels like there has been little to no effort made to make Fight an enjoyable and balanced fighting game. That punching combo – literally the only one in the game – is basically a sure fire way to victory in every fight. I sat there barely paying attention to the screen, even reading through Twitter, while repeatedly pressing X and managed to pick up 5 wins.

You’re probably thinking “surely there has to be a silver lining to all of this?”. Well, there are a few positives. The 5 stages, while they look like knock off versions of popular arena’s from other games, are easy on the eye. They have some pretty impressive lighting effects that highlight the bristling muscles on some of the characters. There’s also a nice blood splatter effect that spurts from landed punches and leaves some sanguine on the ground during the match. The few fighters that do feel original have an impressive aesthetics too. None of these factors make Fight any more pleasurable to play however.

Fight is one of, if not the single worst fighting game on PlayStation 4. A few saving graces mean there’s maybe an hour of car crash entertainment here but beyond that, this game is a pale imitation of the classics in the genre. It either demonstrates a severe lack of understanding of the design tenets that make for a fun and competitive fighting game or that Sabec just didn’t care enough to implement them. I’d prefer to get punched in the face than play this game again.

Fight is available now on PlayStation 4 (reviewed on a base PS4) and Nintendo Switch.

Not Tonight 2 wants to put the American dream out of its misery.
Overpass Review – Tipping Point
The Finger Guns Podcast Ep.105 - Season 2 is here! | News of The Week | Our Recommendations