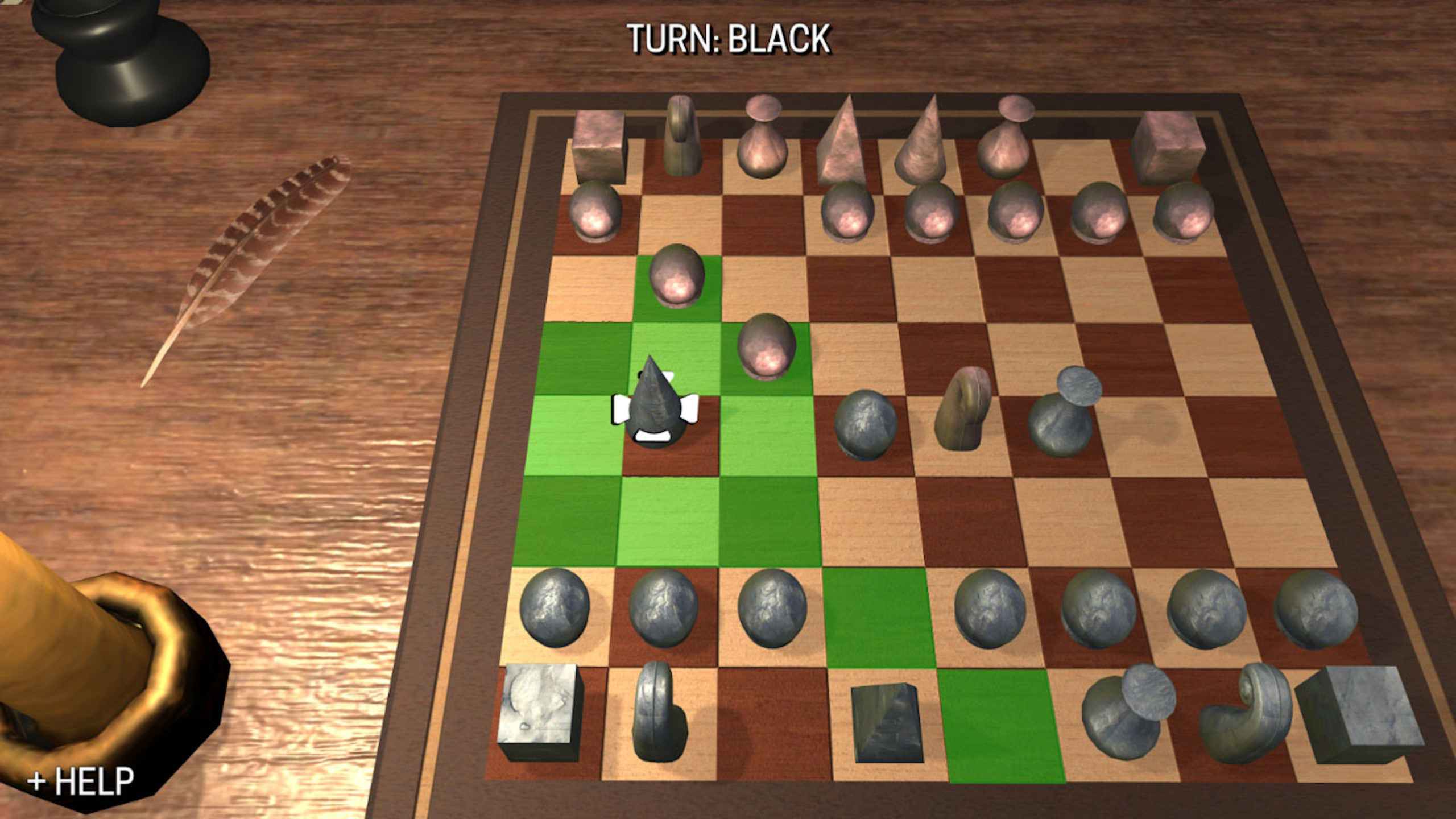 Another featureless board game remake from Sabec, Chess on PS4 is the worst version of the classic game on the platform. The Finger Guns Review.

The PS4 is no stranger to virtual Chess adaptations. During its life span we’ve seen the release of the hyped up version of Pure Chess, played against the Grim Reaper in 4K on Chess Ultra and enjoyed the charismatic stylings of Silver Star Chess. The past 6 years have been kind to the favourite tabletop strategy game. Sabec’s addition to this genre, simply titled “Chess”, is one you can skip. It brings absolutely nothing new to the table.

Talking of tables, that’s the one interesting aspect of “Chess”. The board here is placed on a table in a Renaissance-esque library that you see at the back of the menu screen, complete with classical backing track. None of this is visible during an actual game of chess but hey, an effort was made to give this game some character.

Playable in both 2 and single player, the latter against 4 different difficulty levels – Easy, Medium, Hard and Master – Chess follows the standard, universally accepted rules for the game. This game passes the low bar of acceptability as a digital recreation of a table top game by using the correct rules.

If I would have to explain the rules of Chess to you in this review, this game wouldn’t be for you. That’s because there’s no training mode or list of the rules the game uses. This game presumes you know how to play chess before you’ve downloaded it and makes no attempt to teach you. While that’s not necessarily an issue, other video game adaptations have introductions and tutorials which make this game look threadbare in comparison.

That’s something that’s true for much of “Chess” when it’s laid out next to it’s compares. This game has 1 mode that can be played in single or 2 player. There’s no tournaments, no unlockable chess sets, no character portraits, no variety of locations and no levelling or progression metrics. You can’t even spin the board when playing in 2 player. The deepest the customisation gets in this game is a selection of 4 different boards which can be cycled at any point during play.

The game play is a little lackluster too. I know that’s an odd thing to say about a game that digitally recreates Chess but hear me out. When you want to move a piece, you have to hold L2 or R2 over the piece and then move it to any of the green grid sections on the board that represent available moves. Releasing L2 or R2 drops the piece in the space it’s above so long as it’s green. Each and every time you grab a piece, the game stutters. It’s a small freeze, just a half second stumble, but that’s long enough to drop your piece in the wrong location if you’ve moved quickly. It would have made much more sense to have a “press button to pick up, press button to put down” solution here rather than the control option that was chosen. The same stutter happens whenever the AI opponent takes a turn (incidentally far more severe the more difficult your opponent level). Thankfully there’s no adverse effects when it happens here, other than being a little annoying.

There’s a few questionable design decisions in this version of Chess too. During an AI opponents turn, you dont actually see the chess pieces move. Instead you see a grid space highlighted red to indicate what piece moved to where. Peraonally, I much prefer to see the chess pieces move during play or to at least have a log of what happened on the screen. If a castle just took my Queen, I’d like to see that or read that it has happened.

Visually, “Chess” is neither pretty nor is it ugly. It’s simply pedestrian and uninspired. While other games that digitally recreated Chess pushed the boundaries of what that might look like, here the models are simply…fine. These do little to give the game any atmosphere which is almost entirely silent apart from little ditties that play during Check and Checkmate situations.

Chess adaptations on gaming consoles is a niche and one that is already well served. Sabec’s release provides no new innovation and shows no glimmer of creativity. It’s a stuttering also-ran that’s the worst digital recreation of Chess on consoles.

With better, more functional games already in existence and more exciting ones on the horizon (hello Dungeon Chess and Auto-Chess), it’s incredibly difficult to recommend Sabec’s version of Chess to anyone. Checkmate? There’s no way out for this one.