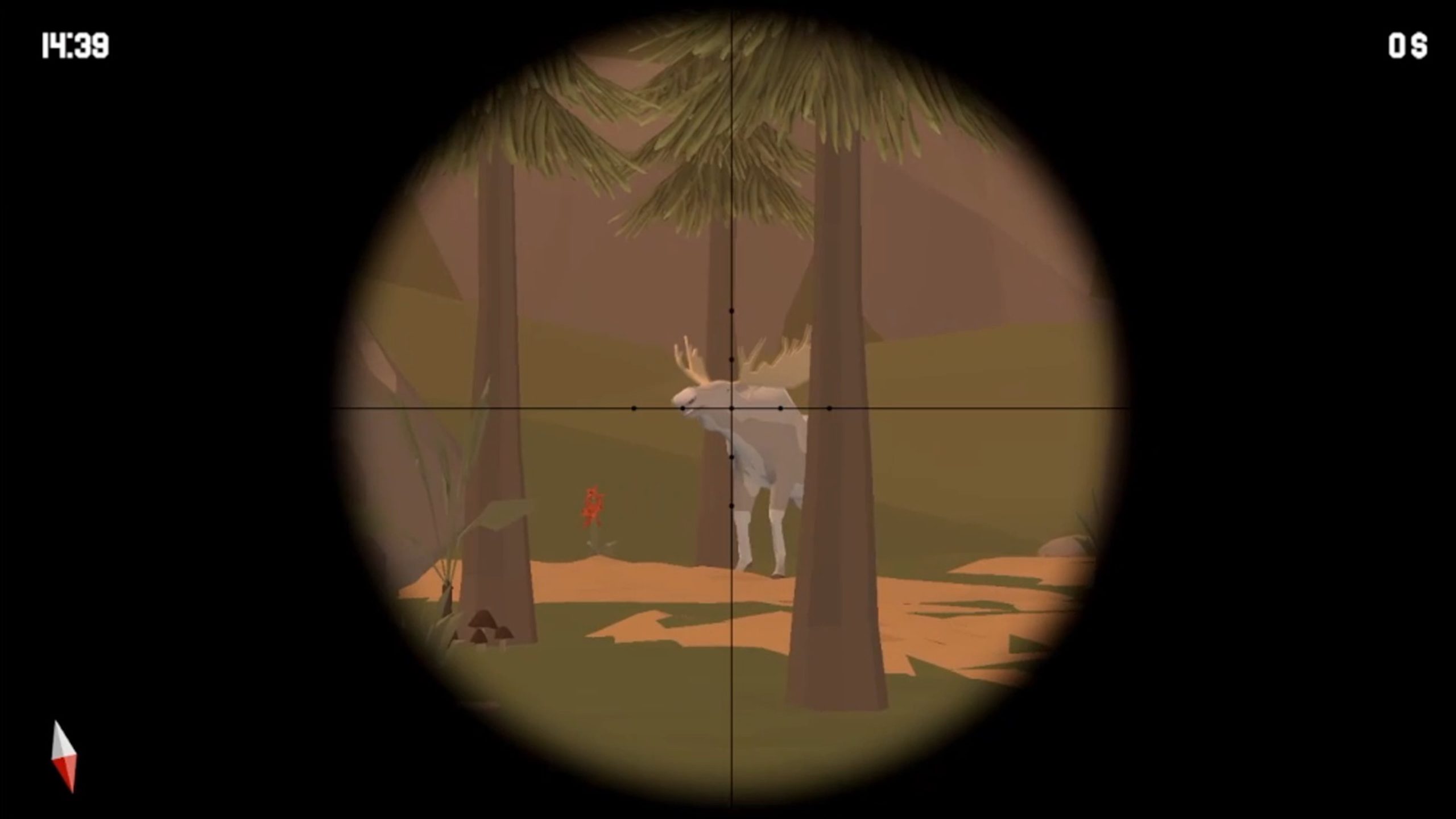 Ah, the thrill of the hunt. Finding tracks or evidence of your prey. Stalking your target, making sure to stay down wind to ensure they don’t smell you. Setting your sights. Adjusting for wind and distance. Holding your breath to steady your aim and pulling the trigger. There have been a number of video games that have had an admirable go at replicating the nuances of hunting – Hunting Simulator 2 being the latest – and have included many or all of these things. You won’t however find any of these details in Sabec’s Hunt on PS4. Another in a long line of shallow and poorly designed games, Hunt feels nothing like a hunting game.

Described as a “sandbox hunting simulator game”, Hunt is a low-poly open world shooter. Upon choosing you’re desired weaponry – a sniper rifle (the exact same one from Sabec’s Sniper) or a semi-automatic machine gun to begin with – and selecting what time of day you want to hunt in – Either day or night – you’re spawned on a beach. This beach is almost identical in the one you’ll find in Sabec’s Sniper too, just without the bunkers and wreckage of war.

The aim of each run at Hunt is to shoot as many of the animals inhabiting this admittedly large and varied low-poly area within 15 minutes as you can. Depending on what time of day you’ve chosen, you’ll come across a slightly different set of animals. In the day, moose, deer, rabbits, boars and bears are knocking about. During the night, the bears are replaced with wolves. Each animal you kill awards you with points and the after 15 minuets, your combined score will be added to a scoreboard. It’s a basic game play loop that’s immediately accessible but quickly loses its shine.

That’s because the world, the mechanics and the animals you’re stalking are so poorly put together. Let’s start with the game world. At first glance, the low-poly blocky world seems very appealing. It’s either bright and inviting or dark and foreboding depending on what time of day you choose. At closer inspection though, that sheen quickly wears off. Plants float above the ground. Tree branches can be seen jutting out of rocks. There’s baron areas and overly busy areas. There’s also one of my biggest bugbears in video gaming – invisible walls. It’s 2020, not 1995. If you can’t design your environment in a way to keep the player in the area you want them in without resorting to invisible walls, it’s time to stop.

Then there’s the animals. Again, on the surface they look charming. There’s some random generation in Hunt which puts different animal shapes and sizes into the game map each time you play too. On one play, you’ll see rabbits and deer, in another you might see a plethora of moose knocking around. It’s their behaviour that’s the issue here. There’s one animation for each species and they repeat ad infinitum. These aren’t natural animations either. The deer look like they’re trying to bit their own tail, for example. The AI is both completely unpredictable and incredibly stupid too. Sometimes you’ll walk into an area and see every animal sprint away over hills at the other end of a valley. Other times, they’ll simply stand there while you walk up to them and get within touching distance without reacting. When they do react they will run away but often, they’ll run directly into things. On one run at Hunt, I walked over the crest of a hill to see 3 deer and a moose all running into one of those invisible walls. Like shooting fish in a barrel.

Talking of shooting, Hunt is incredibly basic in this regard. There’s no wind to account for. No bullet drop for distance. There isn’t even reloading. It’s simply point and click shooting that’s really not up to scratch compared to its peers, especially when it’s described by the developers as a “hunting simulator”. Some of the animals will attack if they see you and much like in Sabec’s Sniper, you don’t get an opportunity to fight back. If a predator sees you, it’s basically ‘game over’.

Then there’s the audio. There’s a constant ambient nature recording playing in the background as you play Hunt but unfortunately, it feels flat. Rather than increasing the immersion to make it feel like you’re playing in a real forest, it sounds like you’ve left the window open and there’s a bird chirping outside. It also changes on a whim between 2 ambient recordings that certainly needed to be mixed together to ease the transition. The weapon sounds are awful too. They’re unrealistic and tinny, like a toy gun won at a funfair. When animals run away, the sound of their limbs on the floor sounds like it was lifted from a cartoon, like Jerry running from Tom. Lastly, when you do land a killing shot on an animal, the sounds they make are almost comedic “yawp”. I’ve cracked up laughing over it a few times as the animal has rag-dolled to the ground.

And that really is my biggest bugbear with Hunt – there’s no real purpose for shooting these animals other than score chasing and the process of a hunt just isn’t here. There’s no tracks to follow or any real indication of which way animals might be. You simply wonder around hoping to see something to shoot and then shoot it. +150 points. I’ve managed some decent scores in this game and it always feels simply odd to wipe out a whole swathe of wildlife, leaving their bodies where they drop, just to try and get on a leader board (which is offline with made up scores only, by the way. There’s no online leader board here). This isn’t trophy hunting. It’s a shooting gallery with animal shaped targets.

Described as a “sandbox hunting simulator”, Sabec’s Hunt is anything but. A poorly crafted open world, shallow shooting mechanics, bizarre AI reactions and very little incentive to play the game beyond a few runs, Hunt is the worst hunting game on PS4 by a country mile.