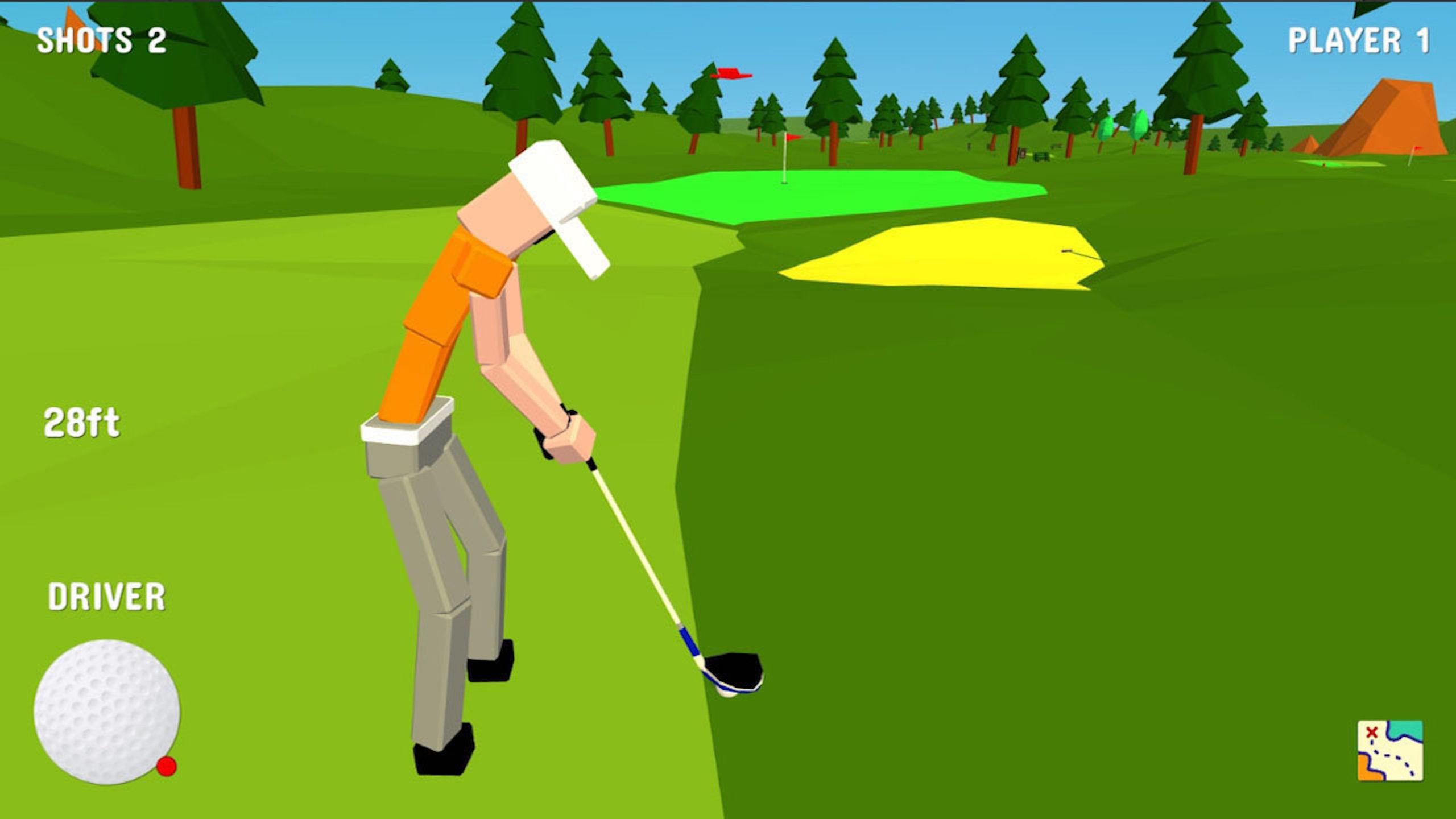 With 1 course, limited features, a low-poly world that’s hard to read and physics that are inconsistent, Sabec’s Golf is incredibly poor. The Finger Guns Review.

The famous saying goes that “Golf is a good walk spoiled”. That’s a sentiment I agree with. I find the sport boring. The exception to that is golfing video games. I actually quite like a golf video game. Like physics puzzles about negating wind effects, gauging power against slopes and selecting the right tool for the job, I find putting a virtual ball in a virtual hole interesting. Far more so than doing it in an actual field. That was until I played Sabec’s Golf on PS4.

I should have known this Golf game wouldn’t have been on par with the rest of the golfing games out there. I’ve reviewed 4 games by Sabec over the past few months – Chess, Sniper, Bowling and Snakes & Ladders – and all of them have been glitchy, shallow or uninspired. Golf shares a lot of those same qualities. It is at least a stable game. I’ve not experienced any crashes with Golf, unlike the others.

Sabec’s Golf is a low-poly, simplistic golfing game. Using the direction arrow on screen, you point in the direction of the hole, indicated by a red pillar of light in the distance and by a small arrow next to your golfer. With a choice of 4 different clubs – Driver, Iron, Wood and Putter – each of which offers progressively less power per stroke, you hold down L2/R2 which fills a power bar on screen. The amount of power in the gauge when you release the trigger button directs the power of the stroke. You can change where on its surface you hit the ball to have different effects on the angle the ball will travel. Put the ball in the “hole” and you move onto the next one (more on this in a second).

There’s a single 18 hole course in “Golf” that can be played in 1 or 2 player. Presented in chunky polygonal shapes with solid colours and no texture, the course is incredibly difficult to read. Because there’s no detail to any of the surfaces aside from different colours for the rough, fairway and green, and because there’s very rudimentary lighting, it’s almost impossible to see slopes or changes in shapes on the land. The most challenging this game becomes is when crossing streams (again, presented by static blue triangles). Hit your ball into the drink and you’ll be penalised a shot. There’s no interesting holes here, even considering the water. It’s the most straightforward and boring in-game golf course I’ve every tee’d off on.

The sections of the course – the green, bunkers etc – do have an influence on the momentum of the ball but they don’t act in any realistic way. The yellow bunkers, for example, slow down the ball but they don’t require a chip to get out of the sand. It isn’t sand. It’s just a sticky yellow series of triangles. The rough, acting unlike like the real world counterpart, is quite bouncy and hilly. Land here and you’ll often overshoot by hundreds of feet. There’s no weather or wind to account for here either.

Despite there being very little to affect the accuracy of your shots, the physics in Golf are simply incomprehensible. Balls will stop at the top of hills without rolling back down like they’re covered in glue one moment and in others, a measured shot will just keep going and going and going like you’ve just hit a superball. There’s no rhyme or rhythm to the way the ball acts. Half the challenge of Sabec’s golf is wrestling the entirely unrealistic and unpredictable way the ball moves.

Of course there’s a few glitches in “Golf”. In one instance, I managed to get my ball stuck in a tree. A few shots did manage to dislodge it so I could finish the hole at +5 over par. The camera has had a few fits when travelling behind the ball too as if struggling to keep up with it and then over shooting.

Finally I need to mention the “holes”. These aren’t actually holes. They’re black pucks under the flags that sticks up from the ground. In order to “Putt” you simply have to touch this black surface. It doesn’t matter how fast the ball is travelling when it does so – it could have been thwacked at full pelt – but it’ll count as a putt so long as you simply touch it. There’s no need to measure your putting shots here. It’s totally unnecessary.

I’ve struggled to find a single positive thing to say about Sabec’s Golf but I did find one nice touch, a single beacon of quality in an otherwise dire experience – the animation. Despite the golfers appearing as if they’re made of Duplo, there’s different animations for hitting the ball depending on how much power you put into the shot. Put all the power into it and the golfer will animate such an action. Reign it in and they’ll step in to take a smaller swing. I’m sure the fact that the animation of a golf swing being the only positive I can find is enough commentary to tell you how I feel about it.

Much like the rest of the Sabec’s recent output, Golf is a basic, ugly, featureless, technically frustrating and thoroughly amateurish experience. Compared to every golfing game available on the PS4 and beyond – Golf With Your Friends, Barry Bradford, The Golf Club, Dangerous Golf, Everybody’s Golf and the PGA Tour Games – this is easily the worst. If “Golf is a good walk spoiled” then Sabec’s Golf is “a good relax on a couch spoiled”.

If you’re looking for a cheap golf game, there’s much better games that can be picked up for less than this. It’s almost impossible to recommend Sabec’s Golf, a game with a single course, frustrating physics, a low-poly environment that’s difficult to read and a distinct lack of personality. This game is a hole in 1/10.

Golf is available now on PS4 (reviewed on base PS4) and Nintendo Switch.