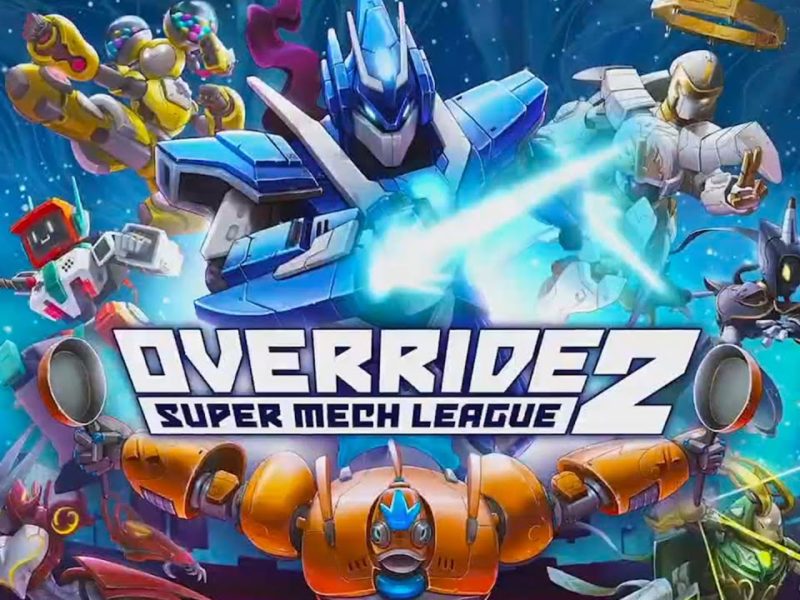 Override 2 Super Mech League is a PvP mech battler that’s like bipedal Robot Wars in the future meets Smash Bros. Take your colourful and lively mechs into combat in on-on-one battles or four player brawls that will test your skills and your patience. There’s dynamic moving arenas full of traps, just like robot wars, and plenty of unique playable mechs to customize and compete with. We got some time with the BETA to give it a test run.

Override 2’s mech designs are a lot of fun, evoking a little of that individual hero-style from Overwatch and Apex Legends. Each one has a lot of personality, from the kooky yellow mech with bumblegum globes for hair to the Optimus Prime/Gundam Wing-looking jock, and all the others in between. Some are large and bristling with thick armour, others are nimble and small. Treat each of them as a different hero, each with their own move-sets, strengths and weaknesses. The finished game promises 20 playable mechs in total.

It’s also kind of fun that the developers at Modus Games Brazil have teamed up with Ultraman, to include four characters from the hit Japanese series in a special Ultraman Deluxe Edition (not in the base game).

Combat is fast and fun when you’re playing against other human players online or local. It’s gets a bit crazy in the modes that involve CPU controlled enemies, which is also how I had to play for much of my time with the BETA. No one to play with? Well then you can literally play against bots. And they will trounce you, at least the first few times.

Each mech has a standard move setup even if the moves that are performed are different. Dodge, double jump, grapple, and shield on the face buttons, and then light attacks on the left shoulder and heavy attacks on the right shoulder. you can also combine shoulder buttons for specials. It works but its clunky and it suffers from the fact that almost any attack can be interrupted by the next attack, or just whoever clicked fastest, or chose the fastest move. This means in a one-on-one battle it was rare I got to really bring out the bigger heavy moves, without getting thrown across the arena while trying to perform them.

AI needs work and that’s mainly because the game is primarily PvP and you’re not really meant to be playing the CPU bots. Currently these battles are hard, relying either on you button mashing your way through with a burly character, or trying desperately to put up your shield in time for a barrage, and I mean barrage, of moves from the CPU. The only way I could win was to button mash the quickest move in my arsenal, and then shield, absorb a hit, and then repeat. It’s fine, and with time and practice you’ll remember the move-sets and be able to do a better job, but it’s not much fun.

Things get a little more interesting when you are playing another person. During these matches it was more common to need to dodge, run around the map, and sample more of each arena. There is a golden light area that you can soak up and get a special and very destructive move out of, and player-controlled enemies would go for this, especially in four-player. At least one player in four player is able to avoid being the centre of attention. Three players might be wailing on each other, and the last can come in and smash the crap out of all of them with their biggest moves, and that can be satisfying. For a short time.

However in the BETA there was a lot of really terrible input lag no matter what I did to my wifi and internet, and also a really distracting amount of frame rate drop. Between the two it made four-way multiplayer decelerate into inputting a command, waiting three or four seconds for it to execute, missing or hitting the enemy, and then finding they had hit you instead. And repeat. I’m afraid that’s just not fun. Pop-in was abundant, and I was constantly frozen or stuck on pieces of environment as the game struggled to cope. These could of course just be BETA stage issues before it goes live, but currently its hard to recommend.

Speaking of environments though, the arenas are colourful interesting setups, with lots to look at and plenty of destructible objects to chuck your opponents into. However the camera is a freaky little mover constantly getting stuck in places it shouldn’t. Combined with rising and dropping floors, sometimes dozens of barrels, mini skyscrapers and obstacles, it can mean that more often than not you lose track of what you are doing. I lost count of how many times I was forced to block indefinitely while the camera swung behind a shipping container and blocked all view, or when I fell into a newly created pit, only for the camera to get stuck in the arena above. The camera needs work.

At this point the BETA only offered versus and matchmaking, practise mode and a tutorial. During the time I played I didn’t see anything in the way of things to earn, ranks to achieve, new mechs or weapons or skins to unlock. There’s also no choice of multiplayer modes currently – you get dumped in four player brawls or one-on-one matches based, it seems, on random selection.

That said, Modus Games have stated there is a Career Mode, where you can fight in leagues and earn rewards, cosmetics and attachments for your mech, as well as a few other multiplayer modes, including 2v2, King of the Hill, and Xenoswarm modes. I’m afraid none of these were present in the BETA so I cannot comment on them here. I would hope that a Career mode would flesh this out enough to make it appealing to single-players as well as just brawler fans.

We don’t score BETAs, previews or unfinished games, but we do hope that on release the glitches are gone, and there are a lot more features and modes on this particular mech battler because in the BETA alone, there’s bare wiring showing.

Disclaimer: In order to complete this article, we received an Beta access code from the publisher.