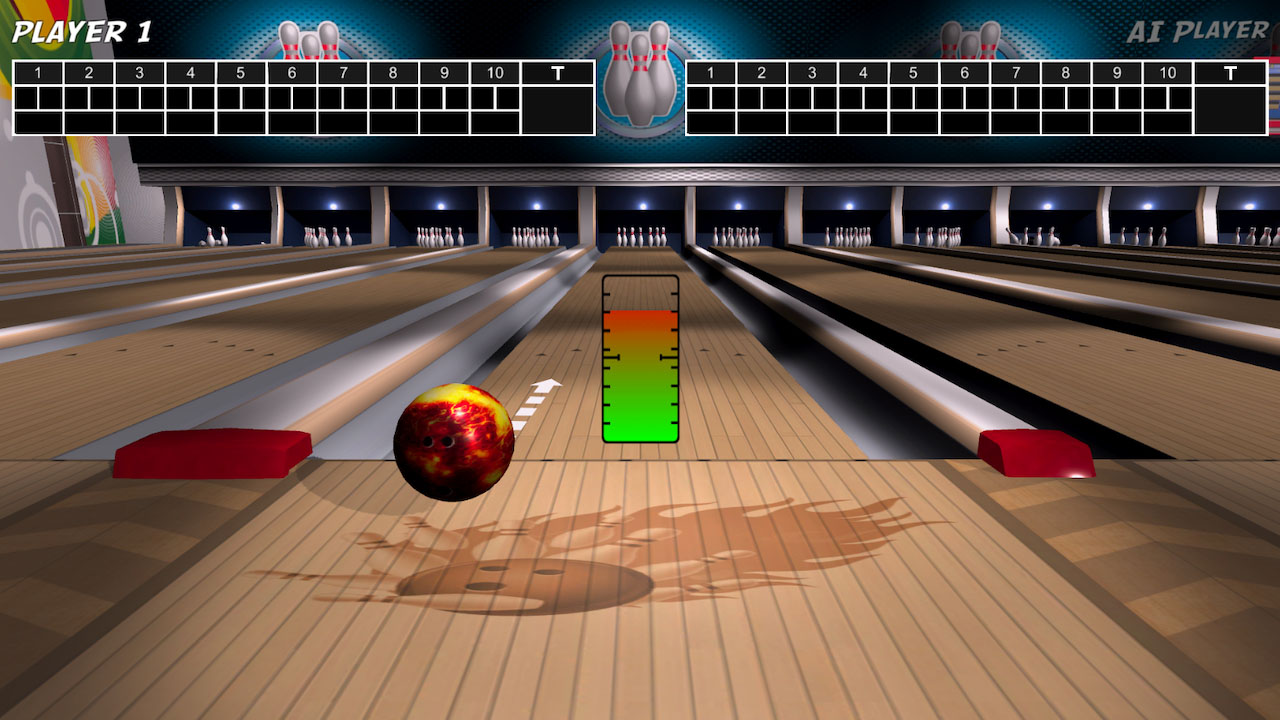 Shallower than the bowling mini-game's you'll find in any number of other games, Bowling on PS4 is a gutter ball of a game. The Finger Guns Review.

Ever since my Wii went off to silicon heaven, I’ve been on the hunt for a bowling game to fill the gap left by Wii Sports. The night’s spent in ten pin battles with my family and friends are some of my most fond gaming memories and I’ve been on the hunt for a replacement ever since. This hunt has taken years. There have been some admirable games in this genre in that time – PBA Pro Bowling being the latest and greatest – but Sabec’s “Bowling” which recently arrived on PS4 cannot be counted among them. This is a gutter ball of a game.

Bowling is quite possibly the most shallow video game I’ve played in 2020. Or the past few years, in fact. There’s 2 modes – 1 player vs an AI that’s completely erratic or 2 human players using the same pad – and that’s your lot. Before heading to the lanes you can customise you game by choosing your bowling ball from a selection of 10 garish designs (lava styled bowling ball anyone?). That’s the depth of customisation here. There’s one lane in one bowling alley to use. No character’s to choose. No difficulty settings. No other rules or options to use. Not even a tutorial.

That wouldn’t be so bad if it wasn’t for the fact that the actual game play is horrendously limited. Looking down the alley you get to move your bowling ball from left to right which rotates it around an invisible semi-circle. This determines the angle you’re going to bowl your ball. It’s not possible to change that angle while also changing the position. Want to bowl a ball down the right hand edge and spin in to the centre? Tough. If you bowl from the right, you’re headed to the left corner of the pins. For a bowling game in 2020 to not have the ability to change the ball position and angle of bowl and have them intrinsically linked for no reason at all is baffling.

Once you’ve picked the spot you’re going to bowl from, you hold down L2 or R2 to start up a power gauge that fills then empties slowly and repeatedly. The higher the gauge when you let go of L2 or R2, the more power you’re putting on your bowl. It’s the kind of simplistic system you see used in Tekken Bowl or Mario Party – you know, when the bowling is a side activity or mini-game rather than the main event.

What about spin, I hear you yell at the screen. They can’t have completely missed out the use of spin right? Well, it’s here but it’s the most inaccurate system I’ve ever come across. Spin is applied as an after touch post bowling and you get to nudge the ball once in a direction. There’s no onscreen indicators or even a prompt to tell you this is possible. What’s more, you can even apply this spin on incredibly slow bowls. Remember when Bugs Bunny used a magnet to move Michael Jordan’s golf ball towards the hole in Space Jam? Bowl a straight ball slowly down the middle and that’s what the spin can look like.

The most egregious thing that Sabec’s Bowling does is completely ignores the rules of bowling. After your first bowl, the pins aren’t reset. Any pins that are still on the wood of the alley are left there. This isn’t right – it’s either extra obstacles in the way or, if they’ve fallen kindly, an easy way to get a spare. I’ve not had to bother on occasion – the still moving pins left on the alley have knocked down the pins left standing before I’ve even taken my shot. Of course there’s no reset button (in fact, there’s no menu at all – not even a pause menu). The pinsetter only kicks in between each player’s turn. It’s not possible to get a score of 300 in Sabec’s Bowling either. The 3rd bowl on the 10th frame? It doesn’t happen. It just ends after the second ball.

Visually, this bowling game is about as bland as chewing gum that’s been gnawed on continually for 48 hours. There’s no personality to the environment and the pins looks like they’re from a Pound Shop kids toy set. None of this is elevated by a total lack of music outside of the main menu. During play, you’re treated to nothing but very slight ambient sounds from bowling balls elsewhere in the hall.

One bonus – the main menu music is pretty funky. In fact, that’s probably the best part of the game. It’s all down hill from there. I first played this game with my twin boys. These kids can forgive a lot when it comes to video games but before they’d completed a single 10 frame game, one of them turned to me and said “please can this end now Daddy?”. Wii Sports this game is not.

A featureless, shallow, bland and thoroughly turgid experience, Sabec’s “Bowling” is poor even compared to the bowling mini-games you find inside other games, like GTA IV. It doesn’t follow the rules of bowling, isn’t fun to play and lacks even a hint of personality. The search for a decent bowling game continues. At least things can’t get any worse.

“Bowling” is available now on PS4 (reviewed on a base version) and Nintendo Switch.