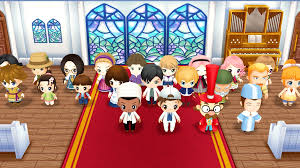 I’ve always found it somewhat difficult to review a farming game. There’s not an awful lot of great ones, and the genuinely great ones are incomparable (Stardew Valley being the gold standard, in my opinion). You have to really want to be in the mood to play a game that demands so much of your time with very little visual or audio stimulation. It’s a genre that whilst has a massive audience around the world has little appeal to those who require alternative ways to blow off some steam. Story of Seasons is about as zen as it gets and is all the better for it though, breezing past the likes of this years Summer in Mara purely by just being a more well-rounded farming experience.

The latest in the Story of Seasons franchise (known primarily around the world as Harvest Moon), Friends of Mineral Town is a from-the-ground remake of the Game Boy Advance title Harvest Moon: Friends of Mineral Town released a mighty seventeen years ago. The Harvest Moon name is owned by the publisher Natsume, hence the name change. The game is exactly the same and is in itself a remake of Harvest Moon: Back to Nature, which launched on the original PlayStation way back in 1999. It’s a fun remake to get your head around, that’s for sure.

Mineral Town is now old enough to drive and legally agree to leave its body to medical science, quite a feat for a video game that perhaps wasn’t on the top of everyone’s list to get a full remake for the Nintendo Switch.

It certainly feels dated. Whilst you can make the argument that games such as Animal Crossing have stuck to their formula throughout the various iterations and to this day New Horizons doesn’t exactly push the boat out in terms of originality, Story of Seasons’ rigid schtick of ‘overgrown farm, fix it’ remains its bread and butter, albeit with a new art style that is cute but doesn’t hold a candle to the likes of New Horizons or, if we’re talking remakes, Link’s Awakening.

You begin the game with a flashback, visiting the farm run by your grandfather. A quick jump to today and you’ve returned, being handed a letter by the mayor explaining it’s up to you now to take over the responsibility to run the farm in your grandfather’s absence and restore its long forgotten prestige. That’s about all you’re getting from the games campaign in terms of why you’re there and what on earth you’re up to. It’s a typical genre story that doesn’t really flesh out your character with little more than ‘your grandfather has entrusted this to you, it’s now up to you..’ etc etc. The story was never going to be the remakes biggest appeal, but it seems a shame not to expand it a little in this new iteration.

Away from the story, there’s all the usual farming game shenanigans you’ve come to expect from the genre. An overgrown plot, a small house and a goddamn stamina bar which has become the source of an awful lot of my worst gaming nightmares, as they so often seem to do. There’s no ‘quick way’ through Mineral Town, genre familiarities such as, you know, waiting, is present and correct, foraging the land and working your way through with little else than your tools that need to be upgraded over time with money you earn from selling your crops is a process. You have to really want to do it, and I mean *really*.

I feel like I’m comparing it to Animal Crossing an awful lot but as that’s the game I’m playing right now that most closely resembles Mineral Town it just has to be said that there is so little immersion in comparison. When Tom Nook congratulates you for paying off your loan it feels like a solid accomplishment. When you sell your crops after what feels like hours of repeating the same button sequence over and over again for pennies your energy levels for Mineral Town deplete. It’s probably good advice to not play them together, whilst New Horizons feels like a party you’re always welcome at and everything is created in your own image, Mineral Town puts you to work and doesn’t let you take a break to go fishing and shoot down balloons with presents in them. The sense of fun just isn’t there, it feels more like a chore than it ever should.

The friends of Mineral Town are plentiful, but there’s very little to get excited about if you’re after characters with any kind of depth and somewhat cliche. There’s a brooding artist, a bro dude who I kept running into far too often. There’s a shy girl who wears glasses and works in the library. You’re going to have to choose carefully if you want to romance them as they’re about as exciting as watching paint dry on a wall you forgot was ever there. The romance can feel forced, rather than actually wanting to marry someone you feel like you must for the sake of moving the game forward. Still, there’s a new aspect of Mineral Town I was delighted to see…

Something I didn’t expect from this remake of Mineral Town was queer representation. It seems a shame at this point that we’re still surprised when a video game allows people of the same gender to marry but here we are, in this straightforward farming game you can play as a woman who marries another woman. The story can weave through romances with the folks of Mineral Town and it’s rather delightful to see the inclusion. It’s not perhaps not as robust as one would hope for but the bare minimum should be commended as at least an effort to address the original games focus on male-female relationships. Story of Seasons got woke and not a moment too soon.

As a remake that you can enjoy as a farming game and very little else, there’s plenty to enjoy about Mineral Town. Fans of the original will enjoy the modernised visuals and most – not all, sadly and obviously – will appreciate the aforementioned marriage options. There’s little else to differentiate the two, Mineral Town doesn’t feel like a new game by any stretch of the imagination and whilst we can focus on the various plus points (the marriages, the farming festivals are a delight and the overall sweetness of the game can’t be ignored as a tonic to daily life), it’s difficult to recommend over the likes of Stardew Valley and Animal Crossing.

There’s just not really enough here to pull your attention away from either of them if you’re still deep in their respective experiences.It’s fine, it’s just not all that special.

Story of Seasons: Friends of Mineral Town is available now on Nintendo Switch (reviewed) and PC.