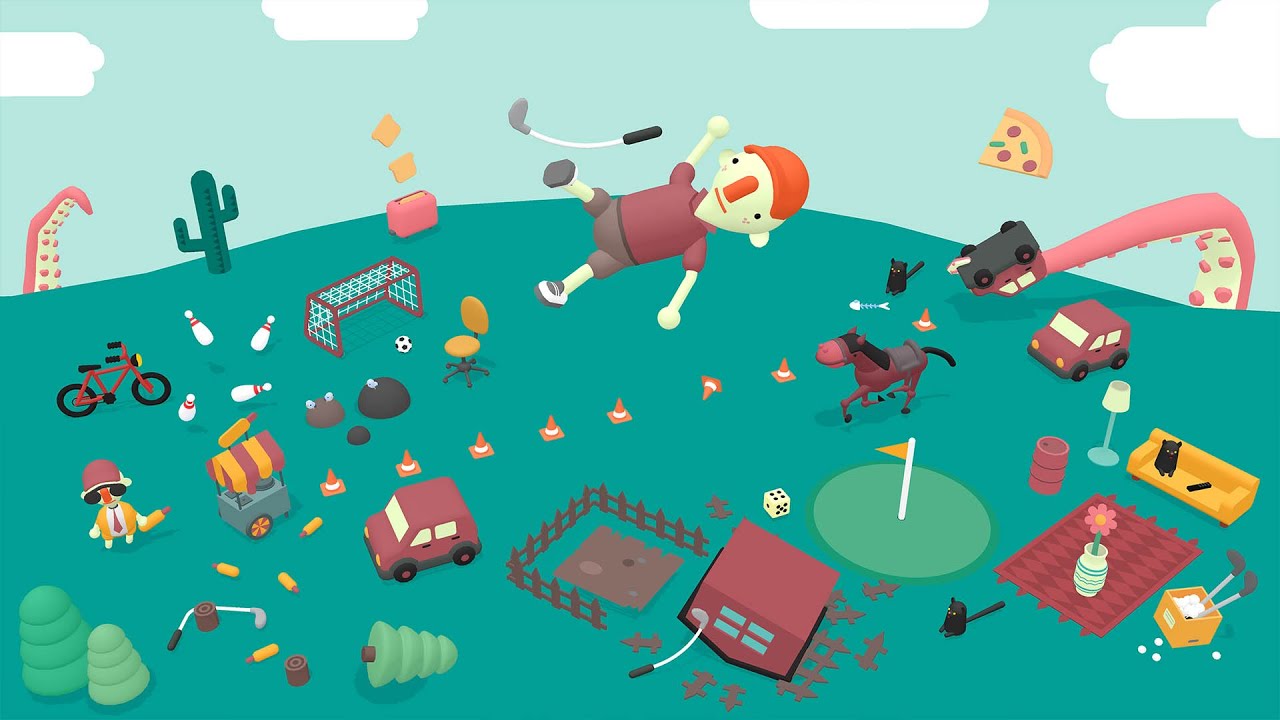 What The Golf? finds its rightful home on the Nintendo Switch. The Finger Guns Review;

I was always hoping this would happen.

The reveal of Apple Arcade irritated me to such an extent I vowed I wouldn’t ever buy an Apple product just to play the games they were gatekeeping. Apple guarding software is nothing new, obviously, but with Arcade it felt like a really strange decision. There are so many games included that deserve an audience far bigger than that of what Apple was offering through a service that the average casual player wouldn’t pay for. A generation of phone users who have had the luxury of paying precisely nothing at all to play games on their iDevice suddenly being asked for a subscription? Yikes. It almost seemed irrelevant how strong their line-up of games was, it bugged me. I wanted to play the likes of Assemble With Care, Chu Chu Rocket Universe and yes, What The Golf?. As games slowly navigate their way onto other platforms, I’m delighted.

And well, if I’m gonna be somewhat dickish, video games of this calibre belong on consoles and PC’s.

What The Golf? always looked like my jam. I’m a sucker for a good golf game, whether it be the sublime (PGA) or the ridiculous (Infinite Minigolf), so the immediate appeal of What The Golf? was purely leaning into the ‘I need something dumb to play before the AAA’s hit’ corner of my wanting, arriving just at the right time to allow me to wind down with something daft but brilliantly addictive. And I’ve needed an alternative to planting flowers and watering plants on my island.

The game itself is quite the easy sell, I think. It’s golf, but stupid. I can get on board with that. The screenshots and the above trailer reasserts this statement. The very first level you have a golf club and a golf ball and you need to get it into the hole a little further up the way. Ok, I can do that. Done. Second course, all bets are off. A quick tap on the Joy-Con and I’m golfing my avatar across the course, whilst attempting to avoid throwing them off the edge and ragdolling my way to the flag you work out exactly what this game is and the dumb grin I had on my face throughout begins to form.

You’re not just golfing with golf balls in What The Golf?. Without any warning you can tee off with a house, a rocket and you’re avoiding red barrels or tasked with getting rid of trees on the course instead of aiming for the flag. Your golf ball can become a football and there’s a goal at the end of the course that you need to score by avoiding kids on the course trying to tackle you. At various points you’re a hundred golf balls or the golf club itself. There’s absolutely no rhyme or reason for anything that’s happening at any given moment and the game is all the more interesting because of this. You’ll never get bored purely because you simply have no idea what’s going to happen next.

The games simplicity balanced with difficult levels feels like classic mobile gaming fodder and the games origins are present and correct in this regard. WTG?’s control scheme is as simple as pointing the direction in which you want to go and then pushing A to hit your object. There’s a power gauge that works in the similar vein to most other golf games – the longer you hold down A the harder you’ll hit the ball etc – but that’s all you really need to think about. Just point it in a direction and hit it. Boom! Now you can play What The Golf?

There’s a lot to explore here too. You work through literal levels of a building as you move up and up taking on more and more ridiculous levels. There’s a section that pays tribute to various video games – including a Super Mario Bros. inspired level which is some wonderful genius that deserves a place in an art museum, followed by a level inspired by Flappy Bird that can go all the way to hell – each with a corresponding soundtrack that nods to their various games and is full of the joy you would expect if you have a knowledge of the games beforehand. Every level is a surprise and whilst they’re not all perfect – and some are bastard hard – the constant surprises are a delight to uncover.

On each floor you can tackle each course in whatever order you like, so if you’re struggling on one you can move on to another with little fuss. Certain completion objectives are set in various sections so you’ll need to level up a certain number of levels to progress. Each level comes with the standard level, the optional objective and the final mission that can earn you a crown, a number of which you need to get through these doors. You can collect crowns from any level you’ve already tackled, so if you remember certain ones that were particularly easy it’s worth going back and 100%-ing each of them in order to get those crown numbers up. The alternative missions are normally pretty fun and offer an extra challenge to each course.

Another point worth making is I very rarely play and complete games in one sitting anymore. As I get older and my eyes are turning into dust I simply can’t play video games for longer than a few hours. What The Golf? had me sat down for hours (I’m yet to 100% the game but completion of the campaign took just under four and a bit hours). I didn’t fully complete the game in a single sitting but I got pretty damn close, and I surprised myself with how long it kept my attention. The aforementioned surprises around every corner gave me reason to keep going, to see if any more video games are riffed on, if they can come with yet another original way to shoehorn mundane everyday objects into bloody golf and what on earth I’ll be putting up the course this time. The gloriously minimalist visuals compliment the madness perfectly, and doesn’t strain the crap out of your eyes.

The Switch edition of the game includes a local two-player mode which just adds to the fun. Being able to share in the ‘is this actually happening?’ moments with a friend is a real treat and can be played with a single set of Joy-Cons, given the control scheme is literally a single button and the analogue stick. The highest praise I can offer is that the mode compliments the likes of Moving Out and Overcooked as a third-party Switch title that should be on the games night list next to Mario Kart and Mario Party.

There’s a glorious amount of fun to be had with What The Golf? and I’m delighted it’s finally on Switch, in particular. It’s a perfect blend of game and console, something I’ve said in various Switch reviews beforehand. When a game lands on Switch and feels completely at home, it’s well worth investing in.

I’m so glad What The Golf? is on Switch.

What The Golf? is available now on Apple Arcade and May 21st on Switch (reviewed) and PC.

Grow: Song of the Evertree Review (PS4) - Nature vs. Nurture
Full Tracklist for Life is Strange: True Colours now available
26 Indie Games To Get Excited About in September 2022

Tags: Triband What the Golf?