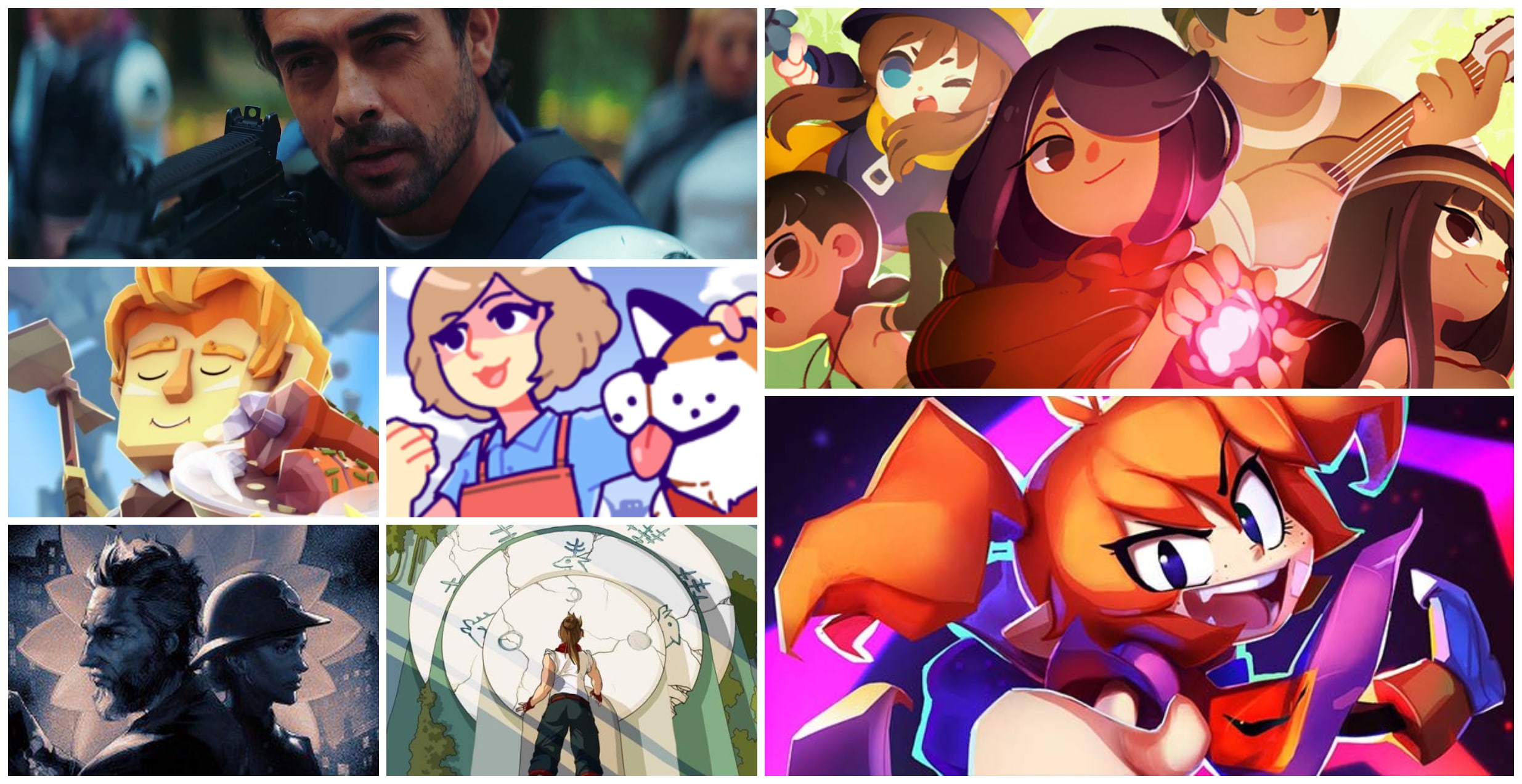 November might traditionally be the month of the AAA behemoths but there’s plenty of indie games that are braving the storm of Pokemon, Call of Duty: Vanguard, Forza Horizon 5, Battlefield 2042, Skyrim (again?) and the GTA Trilogy. From battle royale FMV games to cathartic experiences about unpacking boxes, ingenious perspective based puzzles to morally questionable zoo tycoon games, the indie games of November 2021 have something for everyone. The unbridled creativity that can be found in indie games certainly seems at the forefront in this month’s round up and with 20 games in this list, I’m sure you’ll find a few titles to tickle your fancy.

Without further ado, here are 20 indie games we think you should be excited about in November 2021.

It takes something really special to stand out in the beat’em up genre and by the looks of the trailers, Tunche from LEAP Game Studios certainly has that “it” factor. A solo or up to 4 player local co-op hack and slash game with roguelike elements, players can choose between 5 charismatic characters (one of which is Hat Kid from A Hat In Time) and then set off on a dangerous adventure through the Amazon rainforest. Tunche consists of 4 worlds, each filled with unique enemies, bosses, challenges, and stories. With a gorgeous hand drawn art style, this game is taking us on an adventure through a location that’s not utilised anywhere near as much as it should be. Look out for Tunche when it launches on Nintendo Switch, Xbox consoles, as well as PC via Steam on November 2nd, 2021.

Developers Fabraz are best known for making challenging but deeply satisfying 2D games like Slime San and SpiritSphere DX. With the last project, Skellboy, they combined that 2D experience with a 3D world but now they’ve perfected it with Demon Turf, a hybrid 3D/2D platformer packed with attitude, character and devilish challenge. In this game you play as an impulsive, young, take-no-prisoners demon called Beebz who has decided she has had enough of the demon hierarchy, headed by the Demon King. She sets out to kick demon butt, take over the turf of each demon gang and become the demon Queen herself.

I’ve had some hands-on time with Demon Turf and while my final thoughts are under an embargo, I think I would be permitted to say that this game is a very impressive game. Make sure to check out Demon Turf when it launches on PC via Steam and Consoles on November 4th.

Wales Interactive have cornered the market on FMV indie games. Working with developer Good Gate Media, they’re put out a number of engrossing interactive movies while working around the restrictions that COVID-19 brought to the industry. The next collaboration between the 2 companies comes in the form of Bloodshore, an FMV game set during a Hunger Games-esque battle royale tournament. Featuring a branching narrative and 8 hours of footage to uncover via player choices, Bloodshore looks to be continuing the hot streak that both companies have been on. Will you survive the Kill/Stream tournament? Or will you find yourself shot in the back? Air dropping into action on November 3rd, you’ll be able to play this game on PC via Steam, consoles and iOS devices.

Treasures of the Aegean by Undercoders – November 11th

Undercoders have made a name for themselves for making quirky, quality games like Conga Master, SuperEpic and Mail Mole. Their next game is following in that vein. A fluid and vibrant side scrolling platformer, Treasures of the Aegean combines parkour platforming, perplexing puzzles and a time loop mechanic into an fun looking game. The game challenges players to find the hidden secrets of a mysterious island, and steal recover its treasures before it disappears and the loop begins again. Taking game play inspirations from Prince of Persia, Flashback, and Tomb Raider, as well as an aesthetic that’s based on classic comic books like Asterix and Tintin, Treasures of the Aegean might have the potential to be a real indie game sleeper hit. Make sure to check it out when it launches on PC via Steam and consoles.

Even if Let’s Build A Zoo didn’t have a unique hook, it would still be an indie game worth taking a look at this month. At face value, it’s a zoo tycoon game that allows you to design, build, staff and run a zoo with animals imported from all over the globe. The pixel art work is excellent and during my preview time with the game, I said that it showed a lot of promise.

Let’s Build A Zoo does have a very unique hook however. Using DNA splicing, you can play God as well as a Zoo keeper by merging every species of animal in the game with one another. In total, there are 300,000 different animal combinations that can be made, like a Giraffephant, PandOwl or ChicKaka. Oh course, this presents some… moral quandaries, which may affect the look and feel of your zoo as you spit in the face of evolution. Let’s Build A Zoo is launching on Steam on November 5th.

Cooking games are continuing their meteoric rise in popularity and Epic Chef is striking when the stove is hot on November 11th. In this story driven game you play as a character called Zest who is on the quest to be the best chef in the land of Ambrosia. Along the way you’ll be growing your own fruit and vegetables and tending to an eclectic collection of livestock (including Unicorns) to get the best ingredients for your food. You’ll then be mixing them together while “stirring and tossing with culinary precision to bring out the flavour elements of Vigor, Sophistication and Spirit in your dishes”. If that sounds like it’ll satisfy your palette, make sure to check out Epic Chef when it launches on PC via Steam and consoles.

Of all the indie games that I played at EGX 2021, Conway: Disappearance at Dahlia View was one of my favourites. A story-driven observational thriller from the creators of The Occupation, this game puts you in the shoes of retired detective Robert Conway. The wheel chair bound character launches his own investigation into a missing 8 year old girl who lived in his building. Conway searches for the truth behind her disappearance, observing his neighbours from his apartment window and questioning their behaviour. The short demo I had at EGX was enough to get me very excited about the story potential for this game. We’ll be able to piece together evidence on whether that potential has been met on November 2nd when Conway: Disappearance at Dahlia View launches on PC via Steam and consoles.

To The Rescue by Little Rock Games – November 4th

I’ve been desperate to play To The Rescue ever since I attended an indie games preview event for the game during E3 2021. In the game, you design, run and manage a dog shelter. Unique dogs will be brought to your dog’s home and it’s your job to care for them, learning and then respecting their individual needs, with the ultimate aim of finding them a new home. Prospective owners will arrive at your shelter and will have an ideal dog in mind. Some owners will only go home with a dog type they specify while others will immediately gravitate to a canine companion they didn’t know they wanted. This is all underpinned by a story line that’ll have you expanding your shelter, dealing with disease outbreaks and making very tough decisions. What’s more, 20% of all profits from To The Rescue will be donated to the Petfinder Foundation which will go to help real world dogs. To The Rescue is launching on PC via Steam on November 4th. A Nintendo Switch release for the game will follow.

A zen puzzle game about unpacking personal belongings from moving boxes and putting them away in a new living space, Unpacking sounds like the ideal tonic for modern day stress. While the game play itself looks incredibly satisfying – part block-fitting puzzle and part home decoration – there’s a clever narrative that unfolds throughout this game that’ll give it deeper meaning. Unpacking has 8 different house moves which you experience, each one representing a different stage in a characters life (a character you’re not introduced too or ever see). The non-traditional story unfolds as you discover what items you’re unpacking each time – and which items you’re leaving behind. It’s a very smart idea and I personally can’t wait to dive into Unpacking when it launches on PC via Steam, Xbox consoles and Nintendo Switch on November 2nd.

Thalamus continue their trend of bringing really cool games that deserve a bigger audience to new platforms (like Death Ray Manta SE & Bezier: Second Edition) with Destructivator SE. A port of Destructivator 2, this is a retro inspired gunner and platformer that’s unapologetically old school. You’ll be fighting against soldiers, robots, spaceships, cruel traps, mini bosses & big bosses across 54 levels of action. Getting positive reviews on Steam, this game looks to stomp itself a new home on Nintendo Switch on November 5th, 2021.

Doctor Who: The Edge of Reality Review (Xbox) - A Waste of Your Timelords
WRC 9 (PS4) Review – Realism Where It Matters
Atomic Heart Shows Off 8 Minutes of New Gameplay Ahead of Release