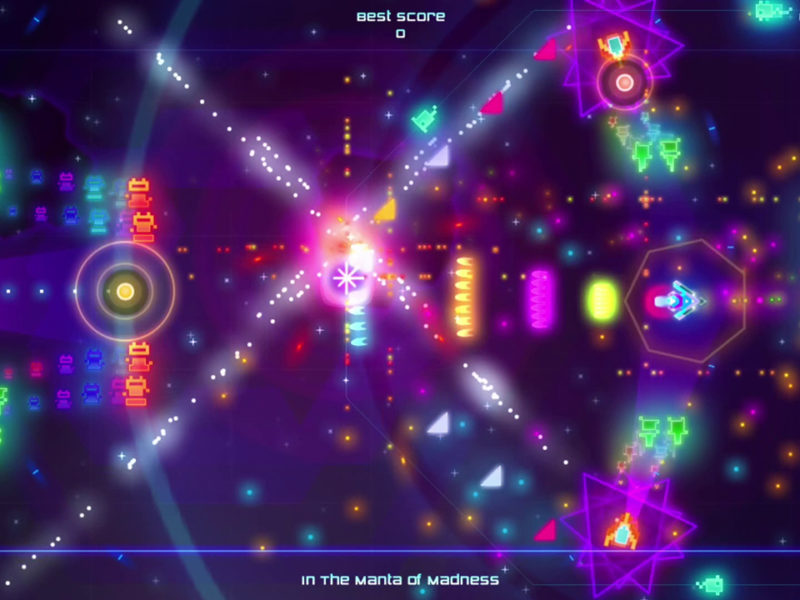 The retro-inspired bliss of Death Ray Manta SE has arrived on the Switch and it’s like a hug from Jeff Minter. The Finger Guns Review.

I’ve been debating with myself about how exactly I should go about reviewing Death Ray Manta SE since I requested the Switch review code last week. Having played a few hours of this twin-stick shooter on PC when it launched back in 2015, I knew I liked this game, adored it even – but I also knew that this game tailors to a very specific niche. This game is like Marmite – If you’re a fan of the games that Death Ray Manta SE emulates (Robotron, Llamatron and I think there’s a bit of Tempest in there too) then you’re going to get a massive kick out of it. If you aren’t then you’re likely going to quit this game after a few minutes thinking “What in the world was that?”.

Death Ray Manta SE has no plot to speak of and has a single mode in which you’re challenged to complete a sequential series of 32 levels with just a single life. Each level contains foes you need to shoot with the lasers strapped to your Manta as you swim around each level. Defeat them all and you’re off to the next level. Using the traditional left stick to move and right stick to fire in the indicated direction, it’s a basic premise that’s instantly intuitive yet hides a surprising depth.

Let’s start with the visuals. This will likely be the most divisive element of Death Ray Manta SE as the visual noise on screen can be overwhelming at times. Each level begins with a burst of colour that’s akin to looking through a kaleidoscope after an evening at the pub supping on Belgian ales. Once that subsides, you’re met with a neon drenched arena filled with foes that will close in on you and shoot, fish patrolling the walls and a dazzling array of effects going on screen. This is just the start of it however – the lasers that spray from the front of your Manta shine like a rainbow and each enemy they destroy trigger both a spray of multi-coloured pixels that spill across the screen and a text message that rises from their final resting place. These messages are certainly a call back to retro classics as they gee up the player with notes like “Good work”, “Nice”, “Love you” and “Luvly”. The result of all of this happening at once can be overbearing at first – my Wife literally said “Woah” like Keanu on her first try – but after a few runs, it becomes easy to acclimatise and tune out what’s there as added flavour against what what’s important and will try to kill you.

The structure of Death Ray Manta SE, coupled with the tone it strikes with the friendly messages it generates, is what makes it so unique. This game isn’t easy, much like the games it emulates, but it also wants the player to experience everything it has to offer and to do it at your own pace. Each level is designed with purpose and you’ll play the same levels in the same order. Because there’s no random nature to the play and each level is served sequentially, it allows the player to learn how to overcome each level through strategy rather than luck. Once you’ve played a level, you can anticipate it and plan for it. This game wants you to progress through pattern recognition, like you would in the ‘good ol’ days’, and that’s exactly how it’s built. Your first play through, you might make it through a few levels before you die and return to the start. On the next play, you know what to expect during these levels and can do them better. You’ll get further before you fail. Level 8. Level 12. Level 15. Level 18. As you progress, new enemies are introduced which become slightly trickier to deal with but through repetition, you’ll overcome with ease eventually. It’s so rare to find this kind of game structure these days – a formula that was common place 20 years ago – that it feels totally fresh again in 2020.

There’s little hints that will help progression in Death Ray Manta SE too, if you’re watchful. That kaleidoscope at the start of each level? Just before it ends, symbols show up across the edges of the screen which indicate the spawn points of enemy fish as well as a gem (more on that in a second). These little hints can help you get a head start as you start blasting in the right direction right from the off.

Each level in Death Ray Manta SE also has an optional objective – a gem spawns at the start of each level but only hangs around for a few seconds before it disappears (leaving behind a message like “Ta Ta” as it does so). Collecting this gem will double the score you receive for the level should you complete it – but it’s a risk to do so. Your Manta has a satisfying weight and heft to its movement, like a very heavy puck gliding on an air hockey table, which means if you want to commit to getting these gems, you have to do so right away. Sure, you could go about your play without bothering with collecting these but if you want to get a higher score, collecting these is a good way to do so.

And this is the point where I’d usually complain about the lack of online leader boards in a game like this but with Death Ray Manta SE, competing against the rest of the world feels like it would betray its core intention. In this game, your only opponent is your own high score. It’s not shaming you for not being as good as the world’s best. Instead, it just wants you to play, enjoy and beat the scores you set for yourself. I think that Death Ray Manta SE understands that those of us who enjoyed the likes of Robotron when it first released have probably lost some of the reaction speeds we had back then. Instead, it wants to provide the feeling of playing those retro classics without giving us thumb ache and the disappointment of failing. Hell, if you pause the game, the game literally shows you a message that says “It’s okay. Take a break. It’s good to take a break”.

Much like the rest of Death Ray Manta SE, the soundtrack and sound effects are suitably pitched. The music, a series of pumping synth tracks that I’d happily listen to over and over, set the pace for the game and the sound effects, a combination of Fruit Machine-esque jingles and synthesised robot sayings like “RAW POWER”, wash over you like the 1980’s distilled into its purest essences. It’s oh so enjoyable.

Death Ray Manta SE is laser targeted to a very specific group of players. If you long for the heydays of the Llamasoft games, this game gives you the feeling you had playing these games back in the day but with spruced up visuals, a plethora of fish puns and a more accommodating nature. There’s some required repetition and the visual presentation might immediately repel some, but for those it’s aimed at, Death Ray Manta SE is an excellent “just one more go” game. Only now, it’s “just one more go, on the go” with the Switch version.