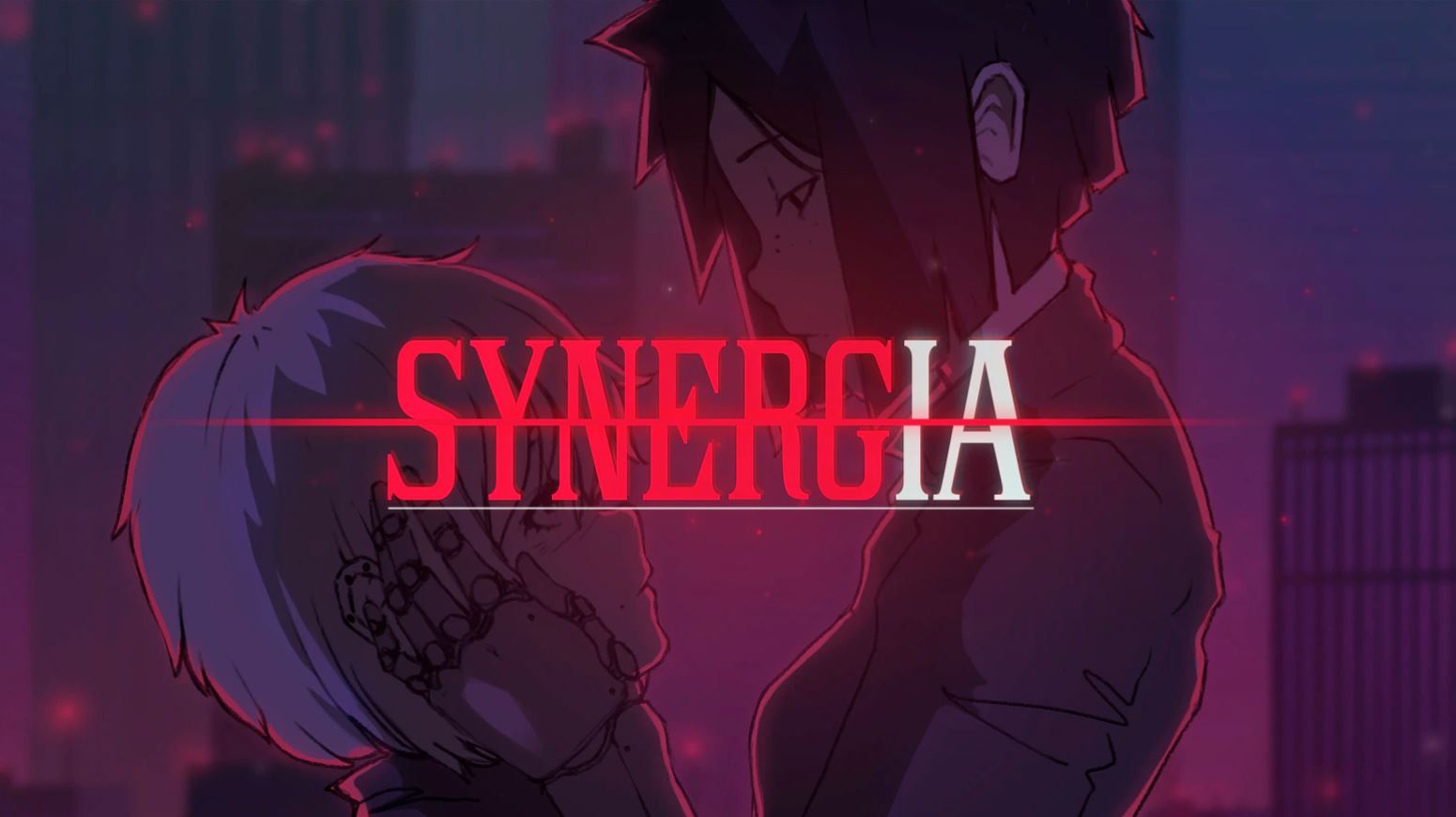 Cyberpunk Yuri visual novel Synergia is out now on Nintendo Switch. We open its cranium to see if this android love story has what it takes. The Finger Guns review.

Initially released last year on Steam, and now via a successful Kickstarter ported to Switch, Synergia is a visual novel about love, hacking and androids. The story is set in a cyberpunk future, with a Yuri android relationship at its core. If you don’t know what Yuri is you’re probably the wrong audience, but I’ll explain for the uninitiated.

While most Japanese anime genre terms revolve around the audience (Shonen for young boys, Shojo for young girls, Seinen for adult men etc) Yuri is a genre defined by its content, much more like you’d find in the west. It’s pretty niche. Any anime or manga that shows a romantic relationship or physical desire between two women is Yuri – ie. Lesbian anime. In this case, it’s even more niche as one party is an android.

Synergia is a visual novel, and really embraces that form, eschewing almost all gameplay elements, and relying on literally clicking a single button to advance dialogue. You are presented with an artwork background, sometimes a representation of a speaking character, and a dialogue and narration box. The entire story is told through that dialogue box, with only the barest exceptions.

Do not go into this expecting puzzles, point-and click mysteries, items, or any other gameplay mechanics or conceits. Its all about story. And thankfully, it’s a mostly strong story.

Cila is a young woman who works as a negotiator for the Cybercrime and Robotics division in the district Police Department. A private security officer who retires defective or hacked androids. Sound familiar? Yeah, she’s a corpo Blade Runner. There’s even a scene or two of turing test type questions and answers, like the VoidKampf tests Harrison Ford’s Deckard administers to identify androids.

A routine case involving an android taking its owner hostage is just the gateway to a larger tale that runs close to five hours, drawing Cila down a warren of black-market android sales, corporate experiments, synthflesh mechanics and strange hackers.

Meanwhile she’s having an existential crisis about falling in love with her live-in android, Mara, whom she acquires under strange circumstances, when her previous android breaks down. Mara is far more human-like than she really should be, and there’s plenty of mystery around her origin, who created her and a mysterious hacker to keep you interested. If you’re interested android love is called Mechanophilia.

Set up as a series of chapters and scenes that build towards the Synergia event, the narrative gives you a countdown each day so you know something is going to go down in 14 day’s time. This build up is well-written and makes up 90% of the story, however the Synergia event and the ending for the game is very abrupt and anticlimactic, explains nothing, and is really jarring after the scenes that precede it. Don’t expect answers, or any kind of satisfying catharsis.

There are multiple ending scenes, but really only a couple of times you get a choice to do anything that affects getting them. Once you have them all there is a pretty long epilogue that explains a few things and is worth the work only if you enjoyed the story.

What’s important in a game like this is strong characters and well-written dialogue and Synergia has both. Cila is interesting throughout and her narration musings on everything from the lore of the world to android sex are illuminating. Mara is also a well-drawn love interest who is easy to like.

It is a story preoccupied with android sex, an act that is illegal in-universal, and therefore forbidden love. However within that, it manages to ask interesting questions about what is legally human when you’ve replaced most of your body with cyborg implants, should androids have human rights, or how to prove you’re human in a world filled with androids. This more philosophical content was refreshing and made it far more than a simple love story.

However much I liked Cila and Mara as characters, a romance between an human and an android, even a nuanced lesbian one, has some issues. There is a power imbalance between the two characters, the android and her owner, which adds a problematic layer to the relationship; one party owns the other. One party controls where the other goes, what they do, who they socialise with etc. And an android falling in love with its owner, that’s Stockholm Syndrome. So let’s say I wasn’t entirely convinced by the love between the two leads.

Synergia is also a cyberpunk story of hackers and malfunctioning androids and takes a fair few cues from Ghost in the Shell; private security firms, nano, thermal camouflage etc especially in the action scenes. I say action scenes, I mean the scenes where the music is more intense and the still images show that action might have happened. Maybe.

So as a visual novel with no gameplay, Synergia is very reliant on its story, but no less so on its artwork. There are plenty of nice backgrounds, but they are still images all the way through. They add plenty of atmosphere, and some of the screens are really well-drawn, inked and lit with neon-infused pink. There are lots of nice cyberpunk cityscapes, but just as many interiors, and moody character pieces.

The background and mood art is real nice, but there are a number of character avatars that don’t feel of the same quality. They have a style of their own, and you may like that style, but it didn’t gel for me. I would also add that the Switch visuals look a little fuzzy compared to what I’ve seen of the Steam version.

Solely reading your way through a game will not be for everyone. When other things happen it can suddenly feel fresh, but the game needed a lot more of these other moments. About three times total, Cila will access a computer, and you can browse the computer screen, access news, emails etc, or she’ll go to an online shop and you can browse items and services. These moments are too few and far between, and other stronger visual novels allow more of this type of freedom. If there’s basically no gameplay then it might as well have been a real novel.

Without gameplay the sound is also brought to the fore. Synergia has a good soundtrack, far better than most visual novels which don’t really place enough importance on it. The atmosphere is enhanced by a soundtrack full of ambient synths, soft pads and glitchy lo-fi beats, created by composer Andy Andi Han, trying to emulate a bit of Vangelis. He recently did Sense: A Cyberpunk Ghost Story, but Synergia’s soundtrack is far superior.

Just as a final disclaimer for buyers, there is some nudity, just a few soft-core images, a few naked androids and a few nipples. This isn’t a game for children, but it’s also not that titillating or gratuitous. The love story is also very much more emotional than physical.

A visual novel can be a welcome change of pace from most game genres. No shooting, no platforming, no minigames, no skill needed whatsoever. It’s the most passive form of gaming, almost like reading a novel or watching a graphic novel unfold; a passive experience rather than an active one. But that can sometimes be just what you need.

Synergia may be very simple as videogames go, but it tells a good story that, if you let it, will draw you happily through the five or so hour run time. It’s a bit short, and ends very abruptly, but at the same time, without anything else to do but read, I don’t think I wanted it any longer. It actually does a pretty good job of making you care for the characters and engrossing you in the story. It could be the subject matter – cyberpunk, androids and sex – but the dialogue is generally good, and the conversations flow quite well. Which is a good thing when it’s most or all of what you’re getting.

What Synergia lacks in play, confining its players to a single advance-dialogue action, it makes up for in engrossing characters and story. Its cyberpunk world, lore, mysteries and soundtrack will draw you in, even if the central android/human love story is problematic and its ending very abrupt.

Synergia is out now on Nintendo Switch (review platform) and PS4, and last year on PC via Steam.