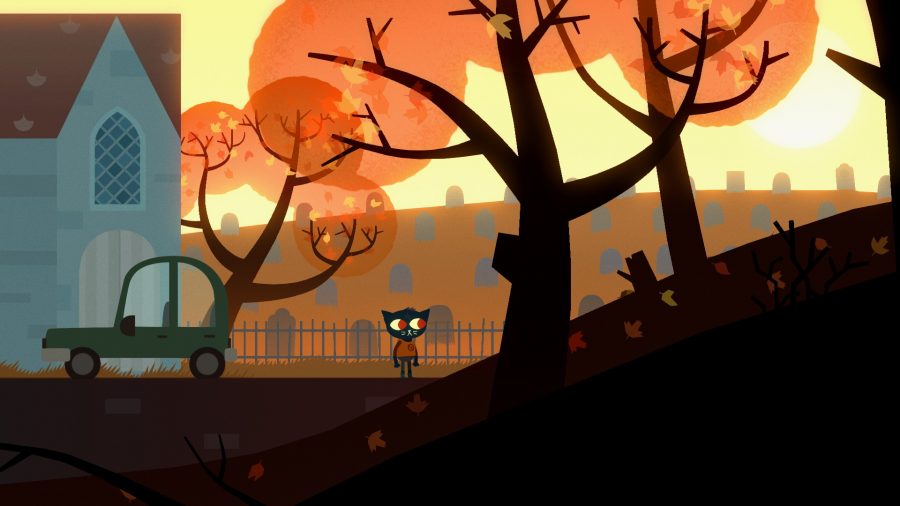 Crimes? Crimes’ Night in the Woods – The Finger Guns Review;

Night in the Woods hit me like a train when it released on PS4 last year. I remember being being entranced by its unique visual style from screenshots and felt like it was absolutely going to be worth a shot. Nine hours later, the campaign was done. I couldn’t put it down. It’s the only game I’ve ever sat down and played from beginning to end in one sitting, I was that captivated. Night in the Woods was my game of the year last year and now it’s on Switch I have the privilege of being able to play the game anywhere I like. What a time to be alive.

So what makes it so special? Beyond anything else, it’s the cast of characters. The wonderful intricacies of a youth growing up in a town where nothing happens. Stuck in service jobs waiting for the world to open up to them. The story of middle America captured in a funny tale about anthropomorphic teenagers who spend their days dreaming of ghosts and supernatural stories that surround the town of Possum Springs. Your protagonist is Mae, a teenage cat who has recently dropped out of college and moved back home with her family. You’re part of her story throughout the game and each day that passes she has some kind of routine that you find yourself getting rather familiar with. Waking up, checking messages on her laptop, running downstairs to say hello to her parents, having a brief conversation then heading out, walking across white-picket fences and climbing powerlines to go and visit her friends who are stuck at work. Mae is a delicate soul, seemingly lost and feeling abandoned by those around her, despite her having a close group of friends you come to know very well throughout your time with the game.

Mae and her friends do what they can to entertain themselves and it’s here the majority of Night in the Woods is spent. They’re all in a band so you’ll need to go to band practice every now and then and take part in some Guitar Hero esque minigames. The group have a slight shoplifting and ‘doing crimes’ problem, so you’ll find yourself jumping tape and breaking into places to discover new places Mae and her friends haven’t seen before. They’re not criminals, they’re just really bored and looking for something brand new to see that they haven’t before. There’s also a full 8-bit dungeon crawler called Demon Tower that’s on Mae’s laptop you can play whenever you fancy it.

Mae is always after the next experience, the next moment that can make her feel like a an anarchist in a boring town and you’ll find out that she’s quite the climber – no, it doesn’t help she’s a cat. She’s far more human than feline -, allowing you to climb up to roofs and do some stargazing through a telescope with a teacher from Mae’s old school. Discovering constellations is very rewarding, so I’d recommend heading up there when you have a spare few minutes. Mae has some rather intense dreams and it’s here the real platforming elements of NITW come barreling in. I say that only because there are moments when it’s frustrating as hell, and you can easily lose yourself whilst you’re trying to figure out where to go. It’s not just as simple as going right and jumping, the dream sequences are, naturally, all over the place, so you’re going to have to keep track of where you’ve been by lighting lanterns. The dream sequences are awkward and bring the game to a bit of a standstill, but they suit the game well and in particular, Mae’s mindset.

Mae is someone who you’d love to have as your best friend and in NITW, you get to experience what that would be like and well, let’s just say it’s there’s never a dull moment. Mae has a notebook that she sketches in throughout the game, allowing you to keep track of where you’ve been or what you may have missed. Exploration is rewarded wholeheartedly, so you’re going to want to head into every building you can, climb every roof and walk every powerline to make sure Mae can fill up her book across every page.

I said in Finger Guns’ Game of the Year post that I felt like I could relate to Mae in some way, and perhaps that was the reason why I fell in love with this game so immediately. I spent a majority of my 20’s tearing it around Europe working and looking for the purpose, only to come back to my hometown in Somerset to reacquaint myself with my town all over again. You learn an awful lot about the history of Possum Springs and more importantly, Mae’s place in it. She’s known very well by the local police and isn’t necessarily taken seriously by anyone, hence the reason why she feels so disconnected to the adults of the town. You get to build Mae’s backstory through dialogue options and you can make her a deviant or a downright troubled teen just by choosing what rather distressing deed Mae may have committed when she was younger. Mae is by no means a bad person, but her boredom turns into situations that we’d all rather not find ourselves in. Playing a part in Mae’s history is something I found compelling, and allowed me to understand a little more about where she came from and how she came to be so disenfranchised with, well, with life as a whole.

Mae’s bad attitude is something that makes her charming and relatable. She’s a cocky youth with a chip on her shoulder about pretty much everything except her friends, who are hugely important to making sure Mae keeps her shit together, if only barely. NITW is purely character driven, its narrative is based on the friendships between Mae and those around her. Her best friend Gregg is positive and full of glee when Mae returns to the point of near lunacy. Gregg’s boyfriend is deadpan and hilarious. They’re written as if they’ve never seen or heard the internet before – even though they talk to each other through an internet messaging service daily -, very much like they have their own dialect which is exclusive to them, allowing for the writing to feel witty and original.

But Mae’s attitude can mean that certain characters want to disconnect from her. A particular moment in the game I won’t spoil here showcases Mae at her most immature, which leads to alienation from friends and a very cold reaction from her parents. She doesn’t want to upset anyone, but finds it difficult to hold up her relationships with friends and family when she’s not being her best self at all times. It’s a difficult line to tread, particularly with her parents, as they have had to make room for Mae once again in their home and persistently remind her that she needs to find her purpose. NITW explores insecurity, desperation, dread and the fear of moving into adulthood without a concrete idea of what you want or what you can offer the world.

Equally interesting is Possum Springs, and the history that develops are you progress through the game. You learn of labor strikes, coal-mining disasters and massacres that make up the walls and the streets of this small town. The beauty of the autumn colours that brighten up the dark history that some would rather see buried forever. The sightings of ghosts that convince Mae that there’s some from history who are back to remind them not to make the same mistakes. You find yourself tearing through the history of the town in explicit detail, Mae and her friends teaching each other mythology they never knew in order to solve local mysteries they find themselves falling into. Oh, and the sadness of your favourite restaurant closing down. Possum Springs is living and breathing and full of stories, you’re going to want to talk to everyone. Even those who won’t be particularly thrilled to see Mae again.

That’s the wonder of Night in the Woods. Being able to tell a story about a forgotten town, with a history so serious and heartbreaking, creating mysteries that are covered up by the elders in a Wicker Man-esque conspiracy and be able to tell this story through the reunion of a group of teenage animals with angst and boredom issues is nothing short of absolute genius. A narrative that deals with a subject matter so very adult and told through characters that are so fun to get to know, the sheer enjoyment of it all balanced out with the darkness of what’s to come, I don’t think I’ve ever played a game like it and I couldn’t be happier I took the shot.

It plays more or less perfectly on Nintendo Switch, and I’m happy that it wasn’t rushed out to get it just right. Unpacking the mysteries of Possum Springs wherever I go has been a joy and I can only hope that one day I can return to Possum Springs to catch up with Mae. I’m not quite done with her story yet. I hope someday she’ll find what she’s looking for. Whatever the hell that may be.

It’s atmospheric, it’s beautiful, it’s glorious. It’s Night in the Woods and it’s one of the most important experiences I’ve had as an enthusiast of this industry for over 30 years.

Night in the Woods is available now on PS4, Xbox One, Nintendo Switch (reviewed) and PC.

Disclaimer; In order to complete this review, we purchased a copy of the game. For our full review policy, please go here.

Tags: Night in the Woods Switch