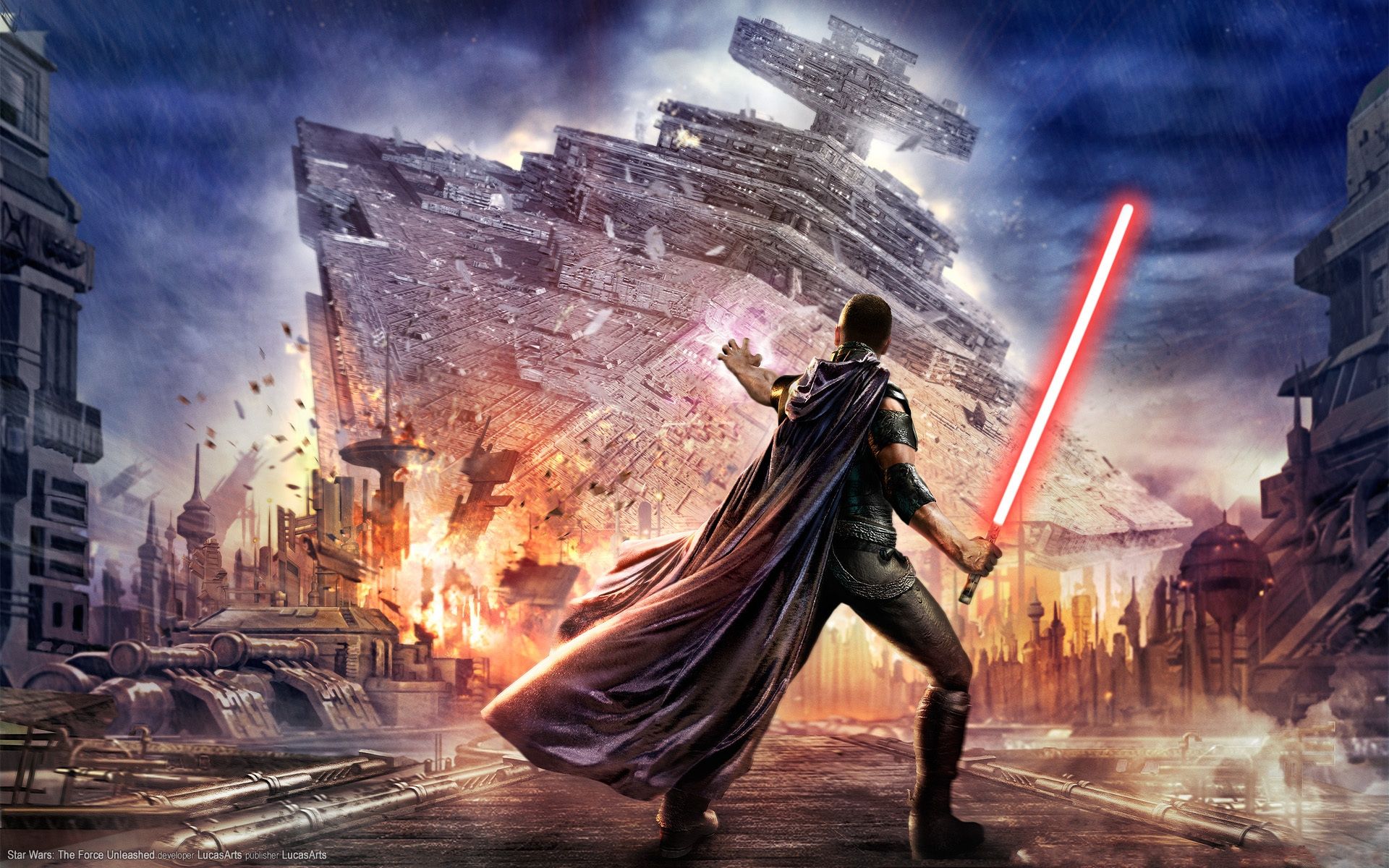 A port of a divisively inferior game, Star Wars: The Force Unleashed finally makes it to the Switch. Is it worth a revival, or should it be left in the past with midichlorians and younglings? The Finger Guns review:

Star Wars games are, on the whole, somewhat analogous to the Light and Dark side of the Force. There needs to be a balance, so to speak. For every Jedi: Fallen Order and LEGO Skywalker Saga (that Ross, Miles and Sean have deep-dived into), there’s Masters of the Teräs Käsi and Kinect Star Wars. Even this game, The Force Unleashed has its good in the Xbox 360 and PS3 versions, with the Wii version being a somewhat weaker version.

It had its pros and cons, but overall was inferior to the “grown up” console offerings. Which is surprising to see that this version was chosen for the remaster. The Switch has the power to run the others, so why pick this one? Fortunately, I didn’t play the Wii version, so this is a new take for me and perhaps some of you too.

So with that in mind, does the return of Starkiller herald some worthy nostalgia, or is it a waste of time and resources on an inferior port? Let’s go behind the Emperor’s back and find out.

In That Galaxy Far, Far Away Again

Stories in Star Wars tend to fall into two categories: the hero’s journey, like Luke Skywalker’s or the anti-hero/villain redemption arc, such as Kyle Katarn’s. Don’t worry if you’re not familiar with that name, he’s in a lot of the spin-off games. To help understand which angle this game goes for, the protagonist’s name is “Starkiller”.

Somewhat kidnapped by Darth Vader as a child, after having his village razed, Starkiller is raised as a secret apprentice. As in; not even ol’ evil Palpatine, the sinister schemer behind a lot of things, knows about him. Vader discovers that an old Jedi that he thought dead isn’t, gets a bit of a nark on about it, and sends Starkiller after him.

Partnered with a hotshot pilot with attitude and a wise-cracking robot… you can see where this goes. It’s pretty much Star Wars 101 at this point, but that’s why we love the franchise. Remember, this is a series that began as kid’s films, so naturally the plot is going to be simple.

There will be revelations, truths will out, Starkiller will realise that Darth Vader is a bit of a baddy and will rebel. That may sound like a spoiler, but as previously mentioned: this is Star Wars. Any major surprise reveals peaked at Empire Strikes Back.

Use The Force, The Double Jump, The Lightsaber…

Gameplay in The Force Unleashed is pretty standard action-adventure fare. Set in third person, with free camera movement, players will guide Starkiller around many a familiar backdrop in the Star Wars universe. Imperial and rebel bases alike, Wookie homelands and various other planetary climates. Verticality plays a part, as players will see themselves using the Force to manipulate platforms to gain the higher ground.

Combat is pretty quick and frenetic, with Starkiller nimbling about and barring no holds. As well as lightsaber combat, he has Force lightning at his fingertips, and can Force grab objects and enemies alike. Or, if you want to get spicy with it; can grab an enemy, dangle them midair, then throw his lightsaber at them. Just to really rub in the whole “agent of the Dark Side” thing.

It can get pretty hairy at times, more so on higher difficulties, when you have to take out a “wave” of enemies to progress. Thankfully, there are experience points gained to upgrade these moves, making Vader’s apprentice a Force to be reckoned with.

No, There Are Others (They Could Have Ported)

So far, The Force Unleashed does sound like a good time all round. If you’ve played the Xbox 360 or PS3 version beforehand, you’d know what to expect. Whereas if you’d played the Wii version instead, you’ll probably want to give this one a miss.

For one, the graphics look insanely dated. You can’t tell that Aspyr looked at the Wii version and thought, “Yeah, that’ll do”. It looks ugly on my Switch Lite, let alone comprehending what it’ll look like on a 43″ 4K TV. A handheld console that can run Control and The Witcher 3, I’ll remind you. The voice acting is fine, but against the cutscenes it makes the first Resident Evil’s scenes look like a Kubrick piece.

It just looks bland, which is a shame as the story is entertaining if a little formulaic for Star Wars. If you’re a “graphics aren’t everything” kind of gamer then you’ll find this enjoyable enough. If you can put up with the odd technical issue from time to time.

Do, Or Do Not. There Is No Decent Checkpoint System

Alongside the aforementioned smoothed off/uninspired graphics, there’s far too much pop-in in The Force Unleashed. Or if it’s not items popping in, it’s other objects clipping through scenery or hitting invisible walls. There’d be times when I’d have Starkiller pick something up, only for it to hit the area around where something was and not come to me. Ruins the pace somewhat, and you can’t blame midichlorian interference on it.

The other massive embuggerance is its terrible saving and checkpoint system. If you’re playing on the easiest difficulty, you’ll cruise through this without any issue. Should players step it up, and subsequently die, then it won’t just be that one pitfall or Rebel soldier to be annoyed at. The checkpoint system sends Starkiller so very far back, you almost want to not bother at times. So, you might think, “Ah I’ll save it, come back to it later”.

But here’s the thing: the voluntary, manual save system does nothing to change that. Bar saving your experience points and upgrades, it sets you back to same checkpoint as the game autosaves. Yes, you could say that I need to “get good” or whatever, but think pragmatically instead. It’s late, you’ve done a fair chunk of a level and you’re tired. You save it, manually, and boot it back up the next morning. Except you’re back at pretty much the beginning of the level, not the twenty minutes you were already in. See, sounds irritating, doesn’t it?

Progress-saving niggles aside, The Force Unleashed is still an enjoyable enough Star Wars game. It tells a decent enough, if predictable, story and isn’t too ugly to look at. The dynamic between Starkiller and his pilot, Juno, or the android PROXY is entertaining and keeps the narrative beat flowing.

I haven’t gone too in-depth with the story because it should be played to experience it. Just because it’s standard Star Wars doesn’t mean I want to spoil it for you. It’s also a fairly long game, giving players at least ten hours or so of galactic magic to soak up.

Perhaps I’m not enjoying it to the fullest as I’m playing on a Lite, and as such, couldn’t use motion controls to pull a Star Destroyer out of the sky. It’s still impressive but, quelle surprise, the PS3 version did it better. But then, is that just personal bias coming through, as I’d never touched the Wii version? Some retrospectives say it’s the better of the three, but I’m not seeing it.

Duel of the Mates

Outside of the main story, The Force Unleashed offers a pretty bare-bones experience. It does carry over the duel mode from the Wii version, but alas, I can’t give an opinion on it. It won’t let me access it on the Lite, it needs to be the TV console version for wireless Joycon lightsaber battles. I’m sure it’s fun though, picking from a massive roster of Star Wars characters, anachronisms be damned.

Overall then, Star Wars: The Force Unleashed gets a positive review from me for at least trying to keep the spin-off franchise alive. If you’re after a decent Star Wars experience with an entertaining story, then this will tide you over. Again, shame they couldn’t port the better ones, but in terms of continuity and technical aspects, the Wii version makes sense. Even if it has aged worse than Palpatine’s reveal in the The Rise of Skywalker.

But if you have played the superior versions, you won’t be missing much if you pass this one by. It may have slightly different story beats, but overall the experience is still the same. The other caveat is you’re not going to get the full experience playing on a Lite. I accept that, because I only have a Lite, but if you’re not expecting it, it may feel like you’ve wasted some money on content you can’t play.

A decent enough romp, Star Wars: The Force Unleashed is let down by a few technical issues and some extremely dated graphics. Switch Lite users won’t get the full experience, but still enough to go on. Console limitations aside, it is fun to hoof Rebels about and use them like levitating pin cushions from time to time.

Star Wars: The Force Unleashed is available now on Nintendo Switch. The other versions are still readily available.