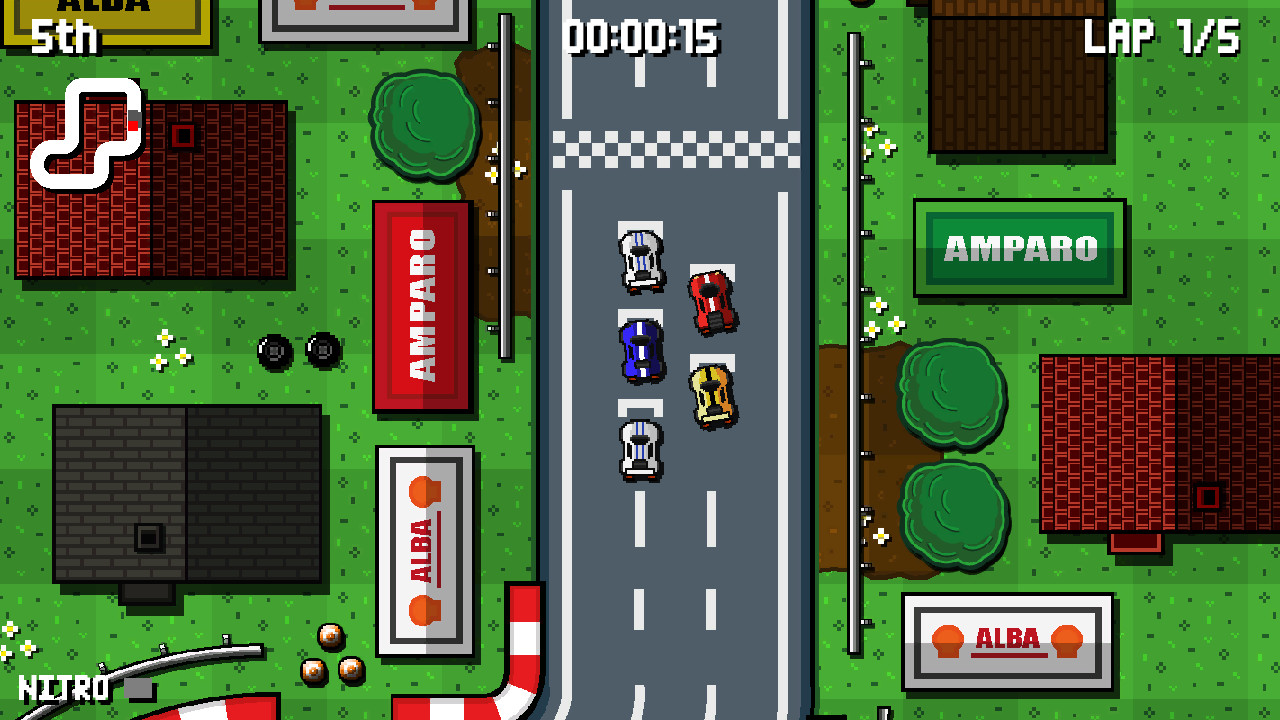 A top down racer that’s aping on a 90’s classics, Micro Pico Racers doesn’t quite reach the high gears. The Finger Guns Review.

A top down racer that’s aping on a 90’s classics, Micro Pico Racers doesn’t quite reach the high gears. The Finger Guns Review.

Ah, the Micro Machines games. I imagine some readers got a bit glassy eyed with nostalgia there. Ignoring the 2017 entry (the least said about that the better), Micro Machines was one hell of a series of top down racers. For those of you too young to have experienced them, these games were based on the toy series of tiny cars. They put you in the driving seat of cars, boats, tanks, trucks and more as you raced around tracks made from everyday objects. Trails of cereal mapped out the track across a dining table where you could get held up on a blob of marmalade. Chalk lines guided you around a pool table track where you could find yourself bouncing off a cue ball. They were great fun and earned themselves a place in gaming’s collective heart, something that many have attempted to replicate over the years.

One of the latest games to attempt that is Micro Pico Racers, a top down racer from 1 person developer 2kSomnis and publisher JanduSoft. Originally released on PC back in 2018, this game has slowly made its way to each console in turn. This time, and the version that is the focus of this review, is the PS5 version (which is cross purchase with the PS4 version). Can Micro Pico Racers replace that Micro Machines shaped hole in our hearts that’s been unfilled for so long? Short answer: No. Long answer…Well…

Imitation Is The Sincerest Form Of Flattery

Visually, Micro Pico Racers fits the bill. Complete with chunky pixel visuals, the game harks back to the 90’s with thick outlines, bold solid colours and a lack of finer detail. By having the name Pico in the title, the game conjures the idea it’s a Pico-8 game, akin the visuals that are capable in the engine. The graphics certainly have that retro edge to them.

The visual quality isn’t so much the issue in Micro Pico Racing. It’s the art direction that drags it down. To put it bluntly, it’s bland and generic. Where as Micro Machines made the most of its theme in its art and game play, this game’s theme is simply “…racing”. Sure, there’s a variety of different environments in which you’ll drive – snowy, sandy, grassy, etc – but they all look very by the numbers.

Those biomes don’t offer anything unique in terms of game play either. There has been no effort to incorporate the level theme into unique obstacles or race modifiers. This was something that Micro Machines did incredibly well. If this game was attempting to emulate the classic series, it fails miserably here.

There’s a real lack of “quality of life” touches in this game too. They’re only little things individually but they really start to mount up. For example, if you fail an event, the game kicks you back to the main menu. There’s no option to restart or retry. You’ve got to navigate back through the menus to find the event you were on and restart it manually.

Thankfully, everything else about Micro Pico Racing is at least average. Some of it is good, even. That starts with a pretty decent amount of content for its budget price. The game’s core is 60 single player races, broken down into 4 difficulty modes. These come in 4 different flavours, each with their own goal.

The first is a straight up race. Competing against a field of AI racers, the aim is to cross the finish line first. Do so and you’ll progress to the next event. The second type of event is a time attack. Here you’ve got to complete a set number of laps before the time runs out. Each new lap you complete adds some more time but one slip up and it’s easy to fail these. The penultimate event type is a combat type event. In this race you’ve got to crash into the other cars on the grid as they career around the track. Each AI car has a health bar which you’ve got to empty before a timer runs out. This is a fun mode that can be quite tricky. Finally, we have a drift race. Here you’ve got to draft around corners to earn points which fills a bar along the bottom of the screen. Fill it before the timer hits zero and you’ll progress.

The 60 single player races, 15 for each difficulty mode, are made up of these 4 event types in structured succession. It’s a little bug bear of mine that progress within the single player races is limited to one event at a time. Get stuck on one race and you’ll be stuck there until you manage to get past it. That might be after a number of failures.

A fleet to play with

Thankfully, success is often just a matter of experimentation. Micro Pico Racers has a selection of 20 different cars, each with their own stats. The attributes of each car have a palpable feeling on the way they drive and feel. If you find yourself struggling, switching to a different vehicle more suited to the task or track can sometimes makes a world of difference.

The wide variety of tracks in Micro Pico Racers means that switching cars regularly becomes integral to success. Some tracks have tight turns which require decent handling while others have long straights which can be taken advantage of by speedy cars. One track is just a giant O shape which offers its own unique challenge.

No matter which car you choose, you’ll have to deal with an AI and “car feel” that feel directly inspired by Micro Machines. The single player opponents can put up a real fight in anything other than the first 15 levels. When you inevitably bump into a car, you’ll get a satisfying “thunk” sound which also carries the momentum into your victim. The first time it happened, I got Micro Machines flashbacks. Lastly, the soundtrack features a retro themed chip tune that’ll likely get your toe tapping.

In addition to the single player content, Micro Pico Racers has local multiplayer events too. This is limited to 2 player only – which is a blessing given the nature of the game and how small the track would be otherwise. If you’re a fan of the straight up racing, that’s possible here – but the most interesting aspect of the multiplayer are the special events.

These come in 2 different variations. The first is a battle mode in an arena where you can fight it out to the death. Using health pick ups and ramming your opponents against the scenery, matches in this mode can get quite spicy. The second event type is basically 1 v 1 top down Rocket League without any of the verticality. This can be quite tricky as the ball doesn’t respond in the way you might expect but it’s still a pleasant diversion. While neither of these modes are ground breaking, they’re pleasant added extras.

As a package, Micro Pico Racers feels a little dated, despite it being only 4 years since it initially released. I imagine that’s because the game is replicating a formula which is already 3 decades old. Compared to most modern day racers in the top-down genre, the game feels antiquated.

Micro Pico Racers is a perfectly fine attempt to replicate the Micro Machines formula. It’s nowhere near as charming and the formula has aged quite a bit in the intervening 30 years between when it was first realised and now. If you’re hankering for a budget racer with a 90’s feel though, this will certainly fit the bill.