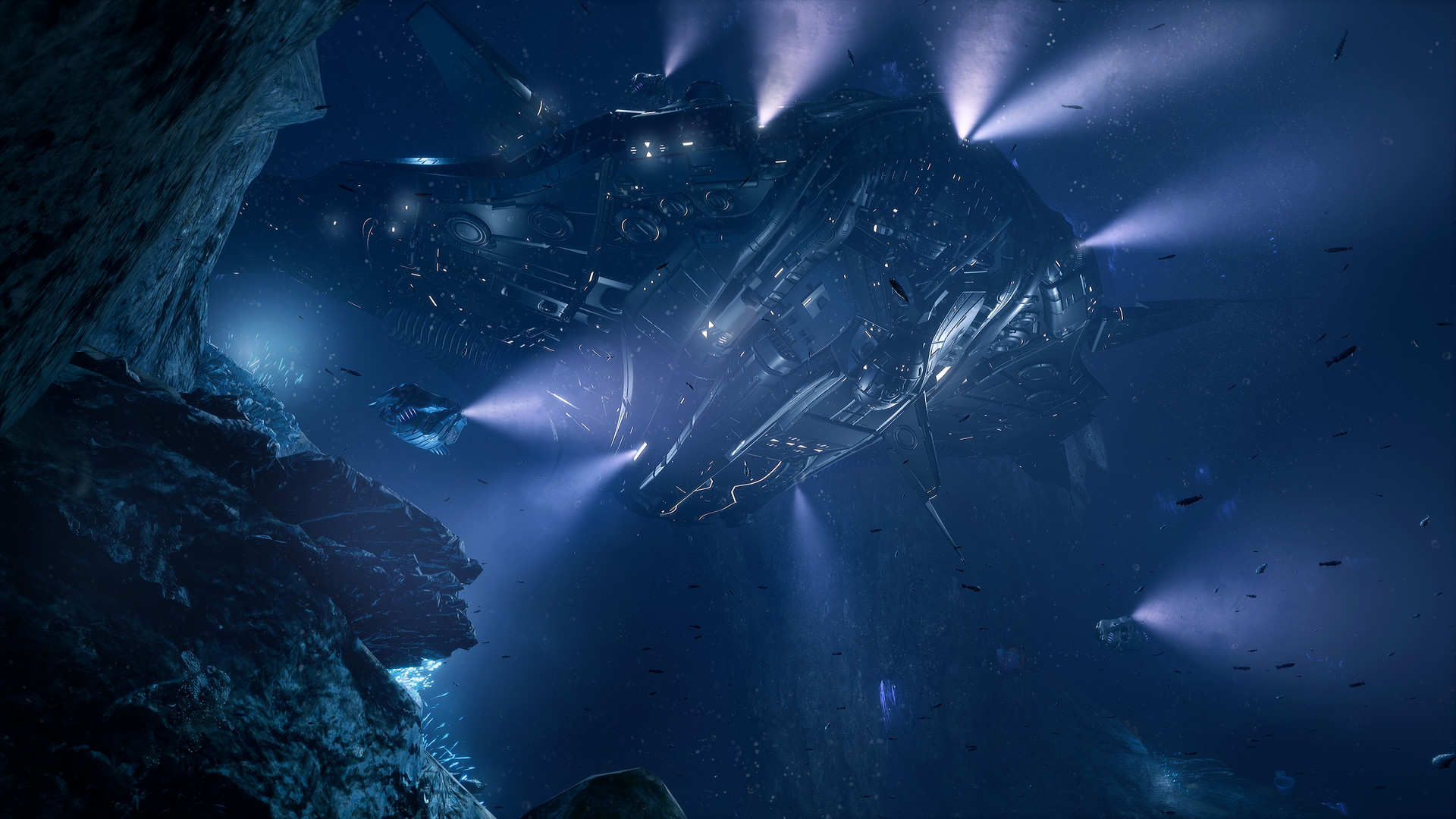 There is nothing more fascinating, yet utterly terrifying to me on this planet than the deep seas. Call it claustrophobia. Call it not knowing what’s down there (hey, I’ve seen The Abyss and Pacific Rim). Regardless, games set in darker recesses of the liquid variety give me the heebie-jeebies more than most, and this is the context under which I’ve been looking at Aquanox Deep Descent [STEAM], Digital Arrow’s resurrection of a franchise that last saw the light of day in 2003.

Essentially a first-person dogfight shooter, Aquanox Deep Descent puts you into the wetsuit of one of a team of crack subaquatic fighter pilots. Earth’s surface is no longer in a habitable state (so, you know, this is an accurate version of the near future), and the remaining population has taken residence in a number of underwater stations. You start out as an unaffiliated group of mercenaries, salvaging what they can from the seabed, while attempting to survive the war raging around you over increasingly scarce resources.

And surviving involves…well, what most post-apocalyptic settings have you do to survive – craft resources, sell the rubbish you find around the world, use the currency accrued to buy improvements for your ships and, of course, shoot things.

It’s the shooting of things that forms the core of Aquanox Deep Descent’s gameplay. Controlling pretty much how you’d expect for a open world dogfight game set underwater, it plays at a more sedate pace than something like Descent or Star Wars: Squadrons, requiring you to give a little more thought to how you approach each battle – you have to be pretty close to your enemies to effectively use your starting machine gun-style weapon, but the slower manoeuvrability means you have to consider an effective escape strategy.

As you begin to unlock and equip new weapons, ships and parts, you can start to play around with differing playstyles. The Shrapnel gun, for example, is basically a shotgun – short-range but powerful. Equip it onto a heavier and more resistant ship, and you can basically use it as a wrecking ball. On the other hand, piloting a lighter and more maneuverable ship and equipping the Shard – a long-range rifle – lets you play more on the outskirts of a skirmish. This serves to add a variety in gameplay approaches that you don’t always see in dogfighting games and, as such, Aquanox Deep Descent feels a little more replayable than many of the titles it shares a field with.

Of course, exploration is a big part of the game as well and, unfortunately, this is where the game feels a little weaker. Technically, yes, it is an open-world game, but – because you are often navigating relatively narrow trenches (such is the way of the seabed) – it can often feel more like a corridor shooter at times. Add in the fact that you’re constantly looking to avoid mines and navigate your way around large rock structures, and movement often felt a little more limited than I was hoping it would be. It’s not game-breaking by any stretch of the imagination, but it just feels cramped and, therefore, restrictive at points.

This is also somewhat exacerbated by the fact that, graphically, the game leans towards ‘functional’ without being spectacular. There are some very nice lighting effects, especially when you’re travelling through areas rife with luminous nanoplankton, but there’s no denying that a lot of the terrain is very similar and pretty dark, giving large parts of the game a very repetitive look. Having said that, the setting was always going to produce a feeling of claustrophobia, and it’s effective in this regard.

This leaves the game’s third core aspect – the delivery of its story, which it does via static visual novel-esque dialogue sections. It’s an interesting style to attach to an action game like this, but it actually fits surprisingly well. The story itself is effectively told, if rather boilerplate. None of the characters you either control or encounter along the way are terribly memorable (apart from one guy you meet in the early stages, but that’s mainly because he looks quite a bit like The Rock), and the call-and-answer, back-and-forth delivery of the dialogue makes it feel a little too stop-and-start. However, the voice acting is pretty decent overall and didn’t make me actively reach to turn the volume down – this extends to the in-action radio chatter, which flows more freely and, as a result, feels more natural.

It’s actually nice to see a dogfighting game that’s not set in either space or a historical war and, for that alone, Aquanox Deep Descent deserves credit. If anything, I actually have some sympathy for its release date falling within the orbit of Star Wars: Squadrons’ release, as there’s a danger that it gets swallowed up in the hype around EA’s title. That would be a real shame for a confident and playable shooter with interesting RPG mechanics that should interest anyone looking for something a little out of the norm.

(NOTE: The game does have an online element with both co-op and competitive multiplayer available, but servers don’t yet appear to be live.)

As resurrections of near-20-year-old franchises go, Aquanox Deep Descent is a very solid effort that, with a few tweaks and a bit more polish, could potentially be special. Here’s hoping that THQ Nordic gives Digital Arrow the opportunity to make another one

Aquanox Deep Descent is launching on PC (review platform) on the 16th of October, 2020.