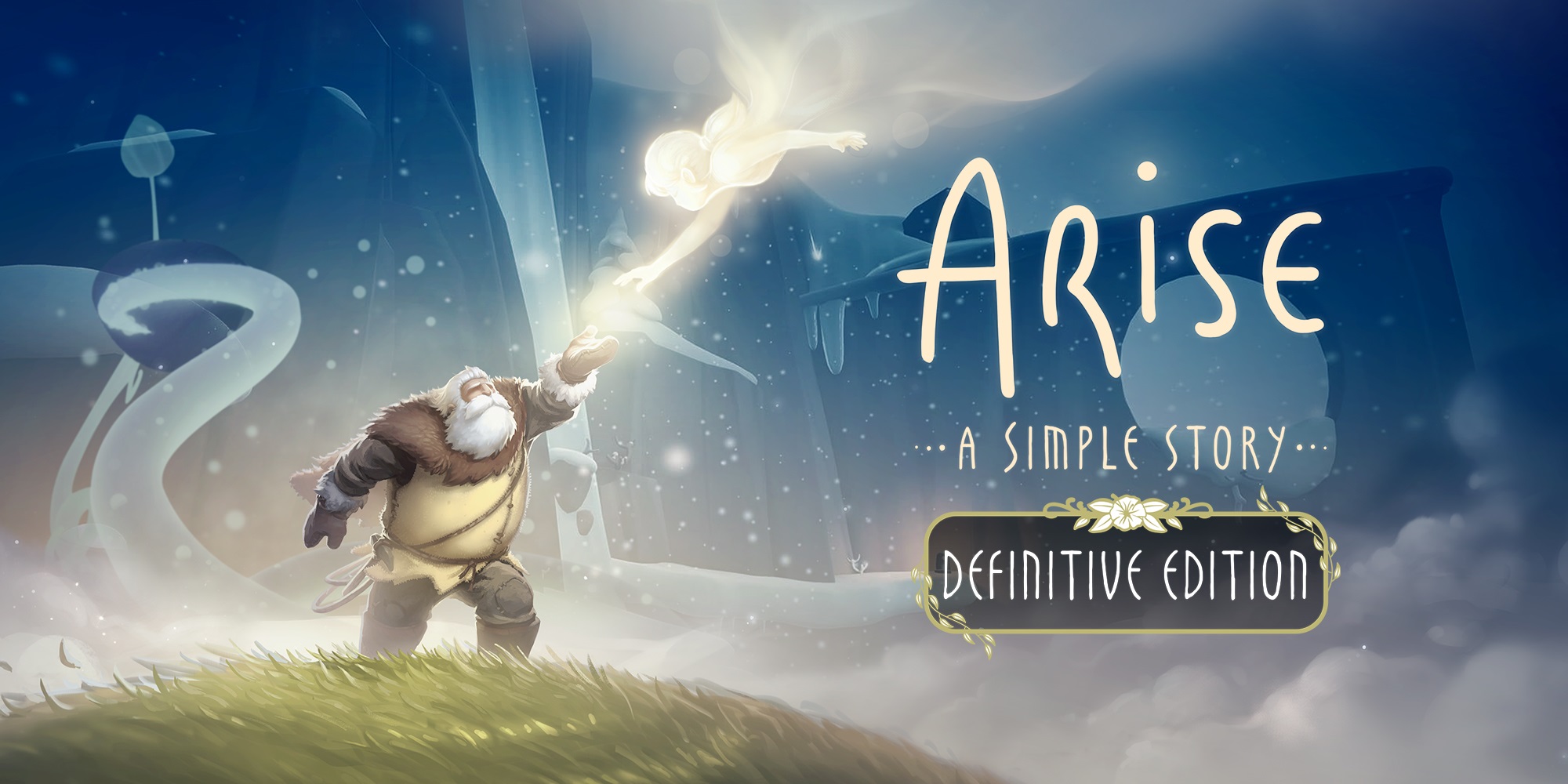 Arise - A Simple Story is one of narrative, emotion and adventure all in a puzzle package. Check out the Finger Guns Review here.

Arise – A Simple Story is an effective story of one’s journey through loss, from beginning to the very end. The Finger Guns Review.

You’ll be hard pressed to find anything ground-breaking in a puzzle adventure game in 2022. A lack of innovation doesn’t mean that a puzzle adventure game can’t be brilliant however. That said, there is something different about Arise. It takes something akin to wizardry to provide virtually no backstory and still evoke a plethora of metaphor and emotion. Arise does just that.

Arise kicks off at the end. Someone’s end at least. I know, that’s weird to say, but it’s true. All the player is shown is a funeral of some sort; A man on a wooden platform with what is assumed to be their family saying their last goodbye. No further information is given at this point, and really none is needed. Your next few minutes within Arise finds the lead character on a snowy mountain.

Arise – A Simple Story is a collection of metaphors depicting this characters’ life. The character the player will assume is an old looking fella dressed almost Nordic in fashion. As the game walks through a small tutorial, you are able to manipulate the environment around them, starting with snow and grass. The more snow on the ground, the higher you may be able to reach. Icy slabs will appear in the water when snow is on the ground, but with more grass these will disappear, either blocking or unlocking your path forward.

As you explore your surroundings, little beams of light will catch your eye. Collecting these open up sketched memories unfolding more of the story. In the first ‘chapter’ this starts in the beginning. A picture really does tell a thousand words in this case. The small snapshots into this man’s journey manages to capture emotion, depth and context, all on a very small stone slab. Immediately there is an idea of isolation, loneliness and sadness.

Each ‘chapter’ eventually uncovers a title giving the player context of what the memories may be describing. In the first chapter as an example, we discover the chapter ‘She’. One of feeling isolated, alone, until someone notices him and love starts to blossom.

A Walk to Remember

The chapters are essentially large hub levels, feeling huge and almost with no limit to the player. You will of course do this in a linear way, but where you go and how fast you travel in that level is up to you. You can absolutely beeline it to the end, but doing this would mean you miss out on the wonderful exploration and joy of collecting the memories. Explore off the beaten track and you unravel more of the story and add detail that will eventually tug on heartstrings rewarding you with story richness.

Memories around the hub levels are sparse and not always easy to find. Some require a little insight or exploration for you to walk on over too, or even manipulate water, or using wind to traverse among platforms. However, as you progress through the game, these memories will take some ‘soul searching’. They are not so obvious to the eye, and there really is clever placement as you come near the end. Some may even require losing a life or two to just collect. Technically, you can ‘die’ in Arise – A Simple Story, but the game saves extremely frequently and you’ll be placed back to moments before you perhaps drowned or fell of a giant sunflower.

Visually the design and style is whimsical, very playful and full of bright hues. Each chapter almost has its own colour palette to play with too. Take from this what you will, but for me, it really seemed as if this was reflecting the emotion or the tone of memory being shared. I don’t want to sit here and spoil the themes and details of each chapter, as that would ruin the wonderful magic of the storytelling that Arise contains. However, to give an example, chapters that had big overarching themes of love, would be saturated with reds and pinks. It seems obvious, but actually this is only really caught when noticing that, not only are you collecting this guy’s memories, but you’re also embodying his journey and emotion from those memories through use of one giant metaphor of the chapter.

One thing that was unexpected was chapters eventually touching upon difficult themes, like themes of loss and death. Arise tastefully and respectfully encapsulates the feelings one may have of this, making it all too relatable for some people who may have encountered those feelings.

Each chapter took me approximately 20 minutes to complete. There is no map and no way to know how many memories you may have missed but once finishing a chapter you end up back in the hub world. The hub world takes place on a mountain with extremely satisfying crunchy snow and fun trails to make (such a kid, yes of course I made rude shapes in the snow). Luckily once in the hub world on the mountain, you will get a tally and total of how many memories you have collected for that chapter. You then have the option to return to collect all memories.

Within each chapter, the character can manipulate a unique aspect of that environment. At first it’s snow, but this will eventually move to really creative aspects such as wind direction, blossoming plants and water to name but a few. One thing I eventually noticed is that nothing is repeated or feels repetitive moving from chapter to chapter. With many puzzle adventures you’ll find the same kind of palette or background, or if the character does have a power it will be the same throughout. You can expect something different within every chapter, even down to puzzle mechanics.

Each puzzle largely revolves around the movement and traversal of the level and collecting memories. There’s nothing too ground-breaking in that department, but again, expect something different within every single chapter as nothing is repeated.

On the Switch, Joycons will react to your death or any impact you may make. Whether this be because you thumped on the ground, or knocked a tree down by pulling it with your grapple. The jump button can be a little enthusiastic at times and over reaches my desired destination, but this isn’t too much of a problem.

Something that I did notice was that some puzzles require quick reaction times, sometimes jumping quickly or stopping time to be able to use height to your advantage. I did find that the reaction time to my button presses wasn’t as quick as I liked at times but this isn’t infuriating to the point you want to stop the game.

Interestingly the loading screen just was not my friend. Everytime I loaded in and out of chapters there would be a blank light blue screen with a ripple loading effect. Seconds later everything would freeze, all sound would stop and all motion would stop until I was loaded into the chapter. It was really odd but I’m putting it down to my Switch being on its way out!

Overall, Arise – A simple Story is a wonderful storytelling achievement from Untold Tales. Miles here at Finger Guns HQ is jokingly dubbed their biggest fan within our team, and I can see why. I am totally sold on the Untold Tales ride! Arise takes approximately 3-4 hours to complete, perhaps longer if you are searching for every piece of the puzzle.

There are some incredibly poignant moments of the story I wish I could gush about in here, from the gut reactions that it evoked to the journey of thoughts that followed. At first, this colourful, joyful crunchy snowed adventure has you thinking that this is all it will be. There is so much more to it than that, and I never expected it to tell or depict some of the memories it did, in the way that it did. It was so delicate and yet at the same time elicits such intense feelings.

Arise – A Simple Story contains a beautifully told story within a charming puzzle adventure. With poignant moments and joyful visuals, this game has the ability to capture a breadth of emotion with ease. It’s a short but worthy edition to narrative driven puzzle games.

Arise – A Simple Story is available now on the Switch (review platform) PS4, and Xbox One.