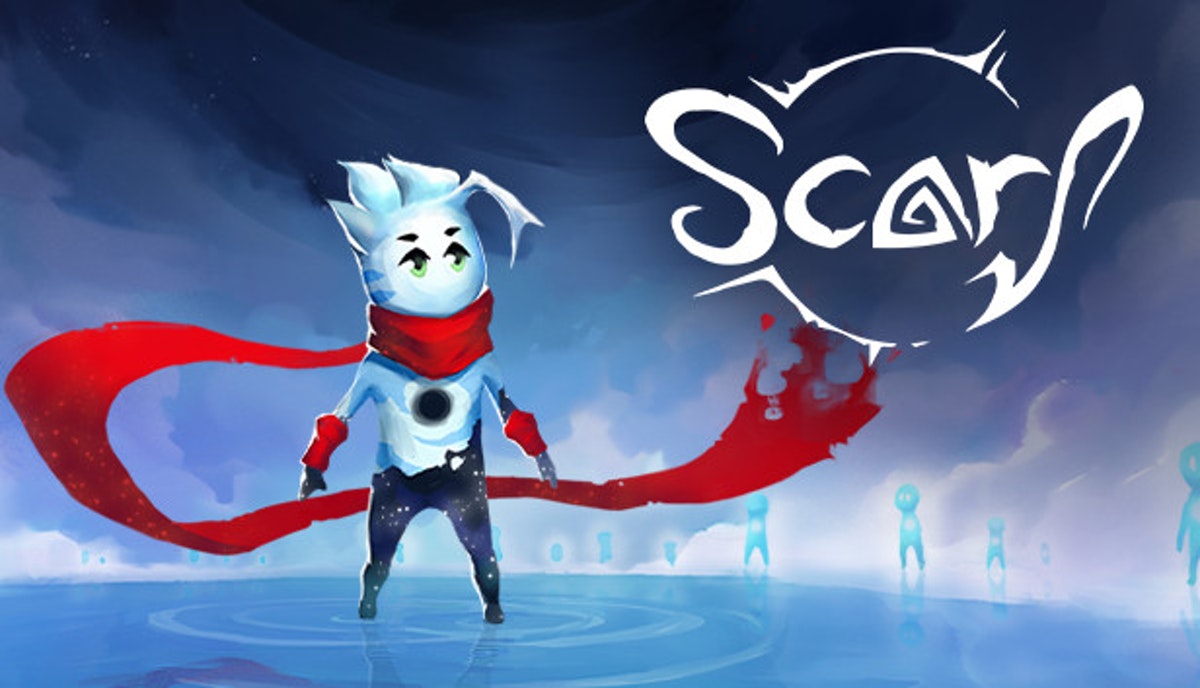 A charming, non-combative platformer, Scarf is a short but enjoyable game that crafts a clever two-sided narrative. The Finger Guns review.

A charming, non-combative platformer, Scarf is a short but enjoyable game that crafts a clever two-sided narrative. The Finger Guns review.

Scarf begins as the game’s unnamed protagonist slowly takes form before you. Shapes and lines converge to bring the charming character into existence who then takes its first few steps as a being. This character called Hyke almost immediately meets another being. A collection of red tendrils flowing together above the ground with snake like grace, this being initially seems threatening. This red alien creature explains that its Mother had been torn apart by a race of invaders and that pieces of her body had been stolen. It wants those pieces back so that it can return home, a quest which the protagonist agrees to help with. With the red alien draping itself around Hyke’s neck like a Scarf (hence the name), the pair set off together on a symbiotic adventure that’s much deeper than it first appears…

Branching out from a central hub zone, Scarf consists of 3 large levels, each with their own geographical theme. Waiting at the end of each of these levels are the Nomad creatures. Each has in their possession a piece of the red, scarfy matriarch that must be retrieved. Using the special powers that the red fibres of the mother creature give them, the Nomads have been crafting their own world. The pair of protagonists have to navigate these worlds – machinery, temples and more – and the obstacles put before them in order to reach these Nomads.

Scarf is a non-combative game and has very low threat. There’s no fighting and there’s very few dangers which might force the player back to a checkpoint. Most of those are bottomless pits to keep the player where they’re supposed to be. Instead, this game focuses on exploration and puzzles, some traditional and others less so.

A lot of genre staples are included here. There’s block puzzles that challenge you to move picture blocks into a particular formation. There’s parkour styled platforming, asking you to jump, glide and swing over pits. Of course, there’s light bending puzzles that has you moving mirrors so that the beam bounces between them before hitting a particular spot. Would it be a puzzle platformer without one?

All of this is centred around the conjoined abilities of the Hyke and its pal. While it’s usually just a textile that flows in the wind, the Scarf can transform into things to aid traversal. It forms a pair of wings to give Hyke the ability to double jump and shifts into a glider so that they can soar over large gaps. Extending itself, it can act like a grapplehook to swing across chasms to certain anchor points. The Scarf gets more powerful as you progress through the game, collecting more of the fragments from its mother.

While the Scarf itself is quite capable, it’s not infallible. There are times when it becomes incapacitated, leaving the little humanoid protagonist Hyke alone who will have to attempt to revive it. This does mean that there are sections of the game when you’re without all of the cool powers that come with the symbiotic relationship with the Scarf.

I’m usually pretty dour about games that do this. I tend to dislike when a game takes away your abilities after having you build them up. More often than not, it’s more annoying than what it brings to the narrative. That’s not the case here. Playing around as just Hyke gives the feeling of how… regular the protagonist feels without the Scarf. It also relays how fragile the red being can be without you.

More than anything though, those moments serve to create a bond between the Scarf and Hyke. There’s an almost childlike innocence to the way they interact with one another. They communicate through gestures, like giving the incapacitated scarf a cuddle when you’re attempting to revive it. It’s quite cute at times. It’s easy to want to protect both characters in their blossoming partnership.

But there are times in this game when you might want to separate the protagonist from the Scarf. Hidden around each level are “Inks”. These are black orbs that repel the red textile protagonist but allow Hyke to get close. Deliberately separated from one another, the Ink then shows you a vision from the perspective of the Nomads. Much like any good narrative, the story of Scarf has two sides. As the player, you get to see and experience both of these which might make you feel conflicted. Even without the Inks, you get a sense that something else is going on in the game via some in-game paintings. Collect all of the Inks however and you’ll unlock a second ending to the game – you’ll certainly want to do this as the ending you get otherwise is somewhat unfulfilling.

The Ending Is Just The Start

That’s one of my biggest gripes with Scarf. The game almost demands that you collect all of the Inks in order to see its most rewarding moments, but doesn’t accommodate them in a player friendly way. If you do happen to miss an Ink and finish the level, you’ll have to replay the whole thing without any of the powers your unlock in the process. A hand full of them are quite well hidden too. I have to question why you’d tie the most interesting aspect of your game to hidden collectables?

The two sided narrative is the most interesting aspect of Scarf too. Almost all of the game play set pieces feel tried, tested and, dare I say it, tired. If you’ve been playing 3D platformers for any amount of time, you’ll have seen everything that this game has to offer before. Multiple times. That’s not necessarily a detriment, but it doesn’t give the game any feeling of originality. There is one aspect of innovation which is pretty cool however – at times, the protagonist can drag a rock into bodies of water, only for the water to be repelled away. Like dragging a bubble through the bottom of the water, it’s adds a fun element to the traversal between puzzles.

The world of Scarf is beautiful to move around in. When running through a desert, the sand dunes dance under foot like a blanket wafting in the wind. Little critters can be found running around or simply chilling on a wall. These add most of the ambience you’ll find in any of the levels. Scarf is actually a particularly quiet game in that regard. Chunks of the game are almost entirely silent. The music in the game is gentle and relaxing too. It’s a pretty serene experience for the most part.

That experience only lasts 6 hours. This feels just about right amount of time for the story that’s being told here; enough time to get you invested enough in the narrative for it to have an impact and not too long so that the game play mechanics don’t overstay their welcome. If you manage to collect the Inks on the first playthrough, you won’t see many ideas repeated in this game either, to its credit.

While it’s not pushing the genre any further forward, Scarf is a perfectly pleasant way to spend 6 hours of your life. As a non-combative puzzle platformer, it lacks originality. Thankfully, a clever two sided narrative carries the game as it tells both sides of a tale and positions the player in the centre. Just make sure you play this game with a guide so you don’t have to replay whole levels again.

Scarf is available now on PC via Steam, GOG and Epic Game Store.

WRC 8 FIA World Rally Championship Review – Dirt Souls
We Were Here Forever Gets Consoles Release Date, Cross Play
A Realms Deep 2022 Round Up - All The Announcements