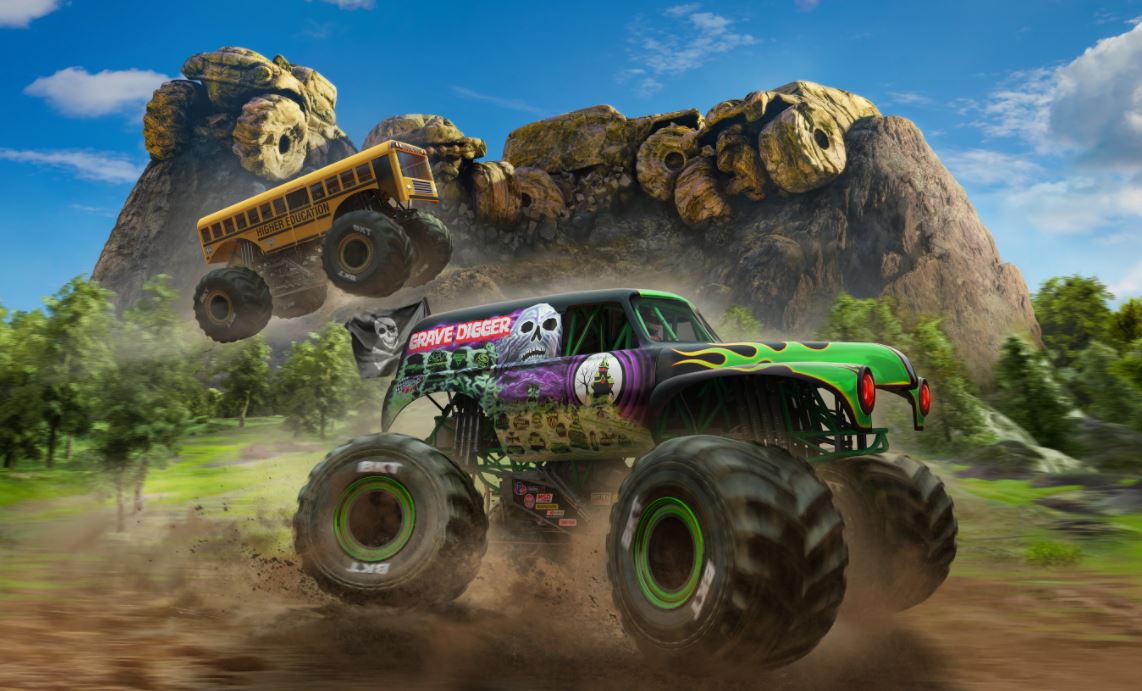 It pays oodles of respect to the majesty of Monster Trucks but Monster Jam Steel Titans 2 undercuts itself too often. The Finger Guns Review.

Upon starting the game, you’re treated to a truly awful tutorial. T.I.N.A, the game’s hyperactive guide, delivers soundbites like “Awesome” and “Good Job” as you pull off simplistic instructions like holding down the reset button or driving around a track. You’ll either feel condescended or that the game is being incredibly sarcastic. If you’re unlucky like I was, the tutorial will then malfunction. The instructions on what to do displayed in the top left corner vanished. According the trophy stats at the time of writing, only 69% of people have completed the tutorial for this game; this is to say, I don’t think I’m alone in experiencing these issues. Needless to say, this was a false start for Monster Jam Steel Titans 2.

Thankfully, the rest of Monster Jam Steel Titans 2 is better than the first impression had led me to believe. After a moment of confusion because of the abrupt way the tutorial abandoned me, I found myself in the guts of the game: A series of 5 open world environments. A playground with ramps, tracks and stuff to crush, these regions have no explicit objectives or purpose other than to have fun. Each with their own theme linked to famous Monster Jam trucks, these interconnected areas are where you’ll find your traction and where the focus of this game becomes apparent.

Monster Jam Steel Titans 2 is a game built around the trucks themselves. It’s a game that understands the majesty and grandeur of monster trucks. These behemoths might be powerful machines packing 1,500 horsepower but they’re nothing but big trucks without their wacky character or far fetched gimmick. This title knows that and celebrates them. Each of the 5 zones have an overarching theme (Bark Park for the series of Monster Mutt trucks, for example) as well as specific interactive spots for each of the 6 trucks (from the 38 strong roster) that are linked to each locale.

If you drive Whiplash, the cowboy themed truck, up to a barnyard in Camp Crushmore (another of the zones), you’ll get a little interactive display along with an unlockable. In the same manner, drive the Blue Thunder truck up to a metal pylon, you’ll get a sparks show and another unlockable. Monster Jam Steel Titans 2 wants you to go out of your way to experience each monster truck and it incentives you to do so.

This element is built upon by an RPG like experience system for each truck. The more a specific truck is used in any game play mode, the better they get. Experience results in levelling up which improves engine, transmission, suspension, tires and chassis stats. These improvements have a palpable feel on the way each truck feels. It’s a little counter-intuitive that some of the most iconic trucks – the Grave Digger, Crushstation and Meglodon trucks – are some of the last to be unlocked however. There’ll be a grind left if you want the best, most iconic trucks in their best condition.

Unlocking new trucks requires a combination of open world exploration around the themed hubs and winning competitions in the World Career mode. A series of events, each made of 3 contests, all reward the player with a new truck to use should they come in 3rd or higher. Each event could be made up of 5 different event variants: head-to-head stadium races, freestyle stunt matches, timed destruction events, circuit races and waypoint races.

The quality of the races in Monster Jam Steel Titans 2 varies wildly. The waypoint races are the most consistently enjoyable type. Set in the open world hubs, you bomb from way point to point by any route or means necessary. The circuit races can be either total carnage, with half of the trucks going around the track in the opposite direction, or rather mundane lap events. Destruction events are similar, either setting up boxes, crates, trailers, fences and more in clean lines to follow for big scoring opportunities or they’re bitty and fragmented. Head to head stadium races are the purest form of racing in this game. Tight corners, measured power and short laps make for some tense laps and millisecond victories.

The freestyle events in Monster Jam Steel Titans 2 are initially a lot of fun but seem to be completely broken. These come in 2 different flavours – In the first you get a time limit to do as many stunts as you can before the time runs out. In the second you have 3 combo’s to rack up as many points as possible, but those combo’s have to have at least one move that involves a 2 wheeled manoeuvre (like a wheelie or stoppie). The issue with these modes is that they’re too easy. You can have an event won seconds into a session or with just one of the 3 available combo’s. It’s not difficult to rack up massive scores once you’ve got a hang of how to handle the monster trucks. I’ve often spent the first 30 of my 120 available seconds in an event racking up a perfect, unbeatable 10.0 score combo and simply put the controller down until the end of the event. Without any type of challenge, these modes lose their appeal quickly.

Like most of the race types that seem to undercut themselves before they can feel fully realised, the larger events on offer here are a bit of a disaster. The Arena Championship Series is the first of these which puts you through a massive schedule of events which feels almost endless. The variety of events here, limiting them to just the competitions in an arena, make this feel like a repetitive trudge very quickly. After you’ve completed this series, you can take place in the World Finals which are more interesting than their predecessors but you’re going to have to have immense patience to get that far.

As is standard for the monster truck racing genre now, you can control the direction of both sets of wheels in Monster Jam Steel Titans 2. Corner with just the left stick and you’ll direct the front wheels, cornering smoothly. Use both thumb sticks and you can stick the truck into a slide as both axels guide the truck around the corner. Many of the stunts in this game can be triggered or controller by the way the thumb sticks are manipulated. Hit the accelerator with both thumb sticks in the same direction and you’ll spin into a donut. Keep those sticks pinned and you’ll turn that into a cyclone.

Compared to the likes of Monster Truck Championship, the handling in this game feels far less grounded. This works in 2 ways – the trucks feel far more powerful and responsive but conversely, they’re more prone to some wild physics glitches. The light, almost floaty handling makes it a whole lot of fun to throw these vehicles around like they’re playthings. Then occasionally you’ll struggle to get your monster truck back on 4 wheels without flipping it over and over like circus tumbler. If you want your monster truck games to have realistic racing, this isn’t the game you’re after. If you’re after a game that’s about the crazy, mind blowing stuff that only monster trucks can do, this’ll be your jam.

Visually, Monster Jam Steel Titans 2 is perfectly serviceable. It’s not going to be winning any awards for art direction or visual achievement but it’s not offensive to the eye by any stretch of the imagination. For every ugly, plain stadium with cardboard cut out audience members there’s a pretty vista to glimpse as you throw your truck over the crest of a cliff.

Most importantly – that engine noise? While it sometimes drones on a little when you hit top speed, that meaty, crackling engine noise that’s so closely associated with monster trucks is present and correct here.

As for additional features, there’s split screen and online play as well as a bare bones photo mode for those that like to play around with such things.

Monster Jam Steel Titans 2 is less of a monster truck racing game and more a celebration of the most famous of the colossal vehicles and the bonkers things they can do. Almost every game play mode feels underdeveloped, you can wrestle with the handling and lose, and the tutorial is very poor. On the other hand, you can race around a dog bone shaped race track in a truck shaped like a shark. It’ll please its intended audience but for everyone else, there are alternatives worth exploring.