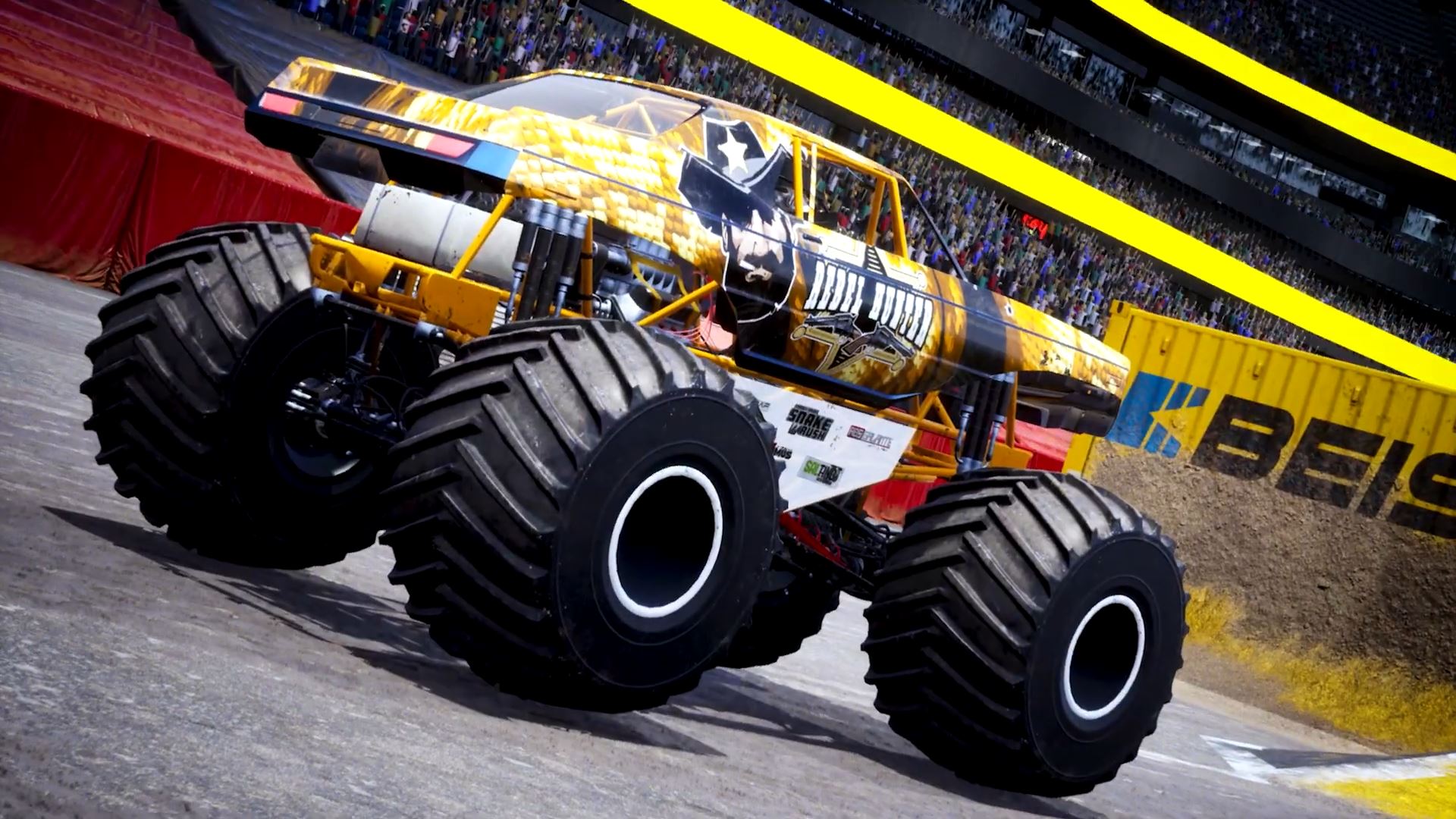 The most American of motorsports gets a virtual adaptation in Monster Truck Championship, a game that has some fun game play modes but wrestles with its own technical issues during others. The Finger Guns Review.

The most American of motorsports gets a virtual adaptation in Monster Truck Championship, a game that has some fun game play modes but wrestles with its own technical issues during others. The Finger Guns Review.

We don’t get many monster truck races in the UK. Sure, there are events but they’re infrequent and/or small scale. They’re nothing like the stadiums packed with fans to see the likes of El Toro Loco, Grave Digger and Kraken go to race-based-war like in America. Instead, my own love for Monster Trucks spawns from somewhere a little less conventional – video games. Bigfoot on the SNES, Monster Trucks (or Thunder Truck Rally in America) on the PS1 and Monster Jam on the PS2 onwards spawned a love for those big wheeled, super powered trucks inside of me. Sure, none of these games were GOTY contenders. In fact, most of them were deeply flawed but I enjoyed playing them anyway. Can Monster Truck Championship, the latest game from Terminator: Resistance developer Teyon, continue this trend? Or is this game actually good, and not just a guilty pleasure?

When you first switch on Monster Truck Championship, the game will offer to take you through a tutorial. I’d highly advise taking that invitation. That’s because driving a monster truck is unlike driving any other vehicle and the handling in this game, while arcade-like to make it less punishing, will still take some getting used to. You’re carrying a whole lot of weight in those trucks but there’s a massive amount of power in them too so cornering can be incredibly tricky if you’re coming in too fast. At first it feels like driving a shopping trolley with springy wheels – generally unruly and has a penchant for flipping over – but with experience, it becomes easy to judge when you’re pushing too hard and need to back up off the power. The other unique aspect is that you can steer with both the front and rear wheels, either in the same or different directions. This is pulled off by using the left and right thumb sticks which direct the front and rear axel’s independently.

The training modes will also take you through the various stunts you’ll need to know and how to pull them off. Summersaults, back flips, bicycles, a variety of wheelies, donuts, sidewalls and wall flips are some of the stunts you’ll have to master if you want to succeed in Monster Truck Championship.

The most interesting mode in Monster Truck Championship is the career mode. There’s no narrative here; It’s a simple structure which acts as a frame for the journey from truck racing noob to professional, national champion. This mode is broken down into 3 separate challenges which get progressively more difficult – the national league, the professional league and the major league. Each league has a series of events for the player to participate in, each of which in turn is made up of a number of races. Each race grants points which accumulate over an event. Win those events by scoring the most points over the races and you’ll earn league points which progress you ever forward towards the “finals”. These act like a qualifying gate into the next league difficulty. It might sound complicated but it all boils down to one thing – come out on top in as many races as possible and you’ll unlock more events to try.

These events come in 5 different flavours – Destruction, Freestyle, Race and Drag Race. In Destruction and Freestyle, the aim of the game is to score as many points in a time limit by stringing together the aforementioned stunts while destroying caravan’s, portaloos, cars and more in order to keep the combo meter both active and increasing. The only difference between these 2 modes is what points are awarded and how they increase the combo meter. Races are traditional lap races against the rest of the competition. First past the finish line wins. Drag races are a little different; they take place on much shorter tracks that are a mirror image of themselves. Oh, and they also include manual starts. Here you’ve got to hold down the brake while getting up to the optimum amount of revs as the starting buzzer goes off. This’ll give you a flying start to hopefully get ahead of the competition – but if you lift the break too early, you’ll get called back for a false start. The drag races are always 1 vs. 1 sprints and completed in tournament brackets.

There’s a basic but tried and tested progression system to the career mode in Monster Truck Championship. As you compete in races, you’ll earn cash and unlock new upgrades. This cash can then be spent on those new parts for your truck which will improve the performance across the engine, brakes, transmission, tires and suspension. These parts become available long before they’re required to keep you competitive with the increasing difficulty of the game. As long as you’re staying on top of buying upgrades when they become available, the career mode has a leisurely difficulty curve which won’t be causing any player too much problems. This might be too leisurely for some players, even on the higher difficulty settings.

Monster Truck Championship also knows that no monster truck is complete without its own personality so you can customise every aspect of your rig. Body work, rims, attachments, paint jobs and stickers can all be tweaked and changed to give your monster truck it’s own look. These aesthetic changes also need to be unlocked and to do that, you’ll need to complete the conditions set out before an event by sponsors you can partner with. While these customisation options are a nice touch, they don’t quite make up for the lack of any licensed Monster Trucks making an appearance in this game. There’s no Grave Digger, no Dragon, no Max-D, no Bigfoot or any of the famous trucks you might have heard of. I imagine the licensing to these vehicles was tied up by Monster Jam.

There’s a wide variety of original tracks and arena in Monster Truck Championship (again, there’s no real locations here) but unfortunately, the quality varies wildly. Some race tracks are interesting to race on with twists, branching paths, jumps and vibrant surroundings while others are brown, tan and bland. Almost all of them lack any kind of atmosphere which is even weirder when you’re bombing around an arena full of fans who aren’t making any noise. There’s also some technical issues with a few of the race tracks in terms of frame rate. This seems to have something to do with the surface you’re driving on; Any track that has dust clouds kicking up behind the monster trucks seems to have frame rate slowdown issues that can be quite distracting.

That’s not the only technical issue with Monster Truck Championship. The draw distance on the shadows in this game are short on Xbox One. This isn’t something I ever feel like I need to criticize these days as it’s so infrequent that this is even worth mentioning – but because the shadows take their details so close to the play area, it’s hard not to notice out of the corner of your eye while playing.

Outside of the career mode (which admittedly will keep you busy for a good 12 hours or more), there’s not a lot more to Monster Truck Championship. If you fancy a quick race, you can jump into Quick Play and play any mode on any of the appropriate tracks for that mode type. There’s also session based online multiplayer but during my review period with this game, I wasn’t able to test it.

If anything, Monster Truck Championship is a game built on good intentions but poor execution. Before each race there’s some commentary introducing the race type and venue – but it’s corny. The higher difficulties make the AI racers faster and more aggressive towards the player and one another – but because the opponents crash into each another more often, it doesn’t actually get that much more difficult. There’s a rev based launch system that’ll get you off the start line quickly if you hit the mark – but if you’re at the back of the pack, and because the tracks aren’t wide enough to overtake at the start, you’ll just end up in the back of the monster truck ahead of you.

As you’ve read, Monster Truck Championship certainly has its fair share of issues but that’s not to say this game isn’t big, dumb fun at times despite them. In the Destruction and Freestyle modes, this game can feel like Tony Hawk’s Pro Skater as you try to string together impressive runs without bailing out ending up on your roof life an upturned turtle. There’s one thing that this game gets absolutely right – the engine noise. Like a steel throated banshee, the sound this game roars out while those 1900HP engines are revving is magnificent. As monster truck racing games go, this one continues the trend of being a flawed yet strangely fun title.

The race feel takes a little getting used to, it’s sorely missing any licensed legends and it has some technical/design issues but in the game modes where Monster Truck Championship revels in the magnificence of these vehicles and what they’re capable of, this game is capable of raising a smile.

Monster Truck Championship is launching on the PlayStation 4, Nintendo Switch, Xbox One (reviewed on Xbox One S) and PC on the 20th of October, 2020.