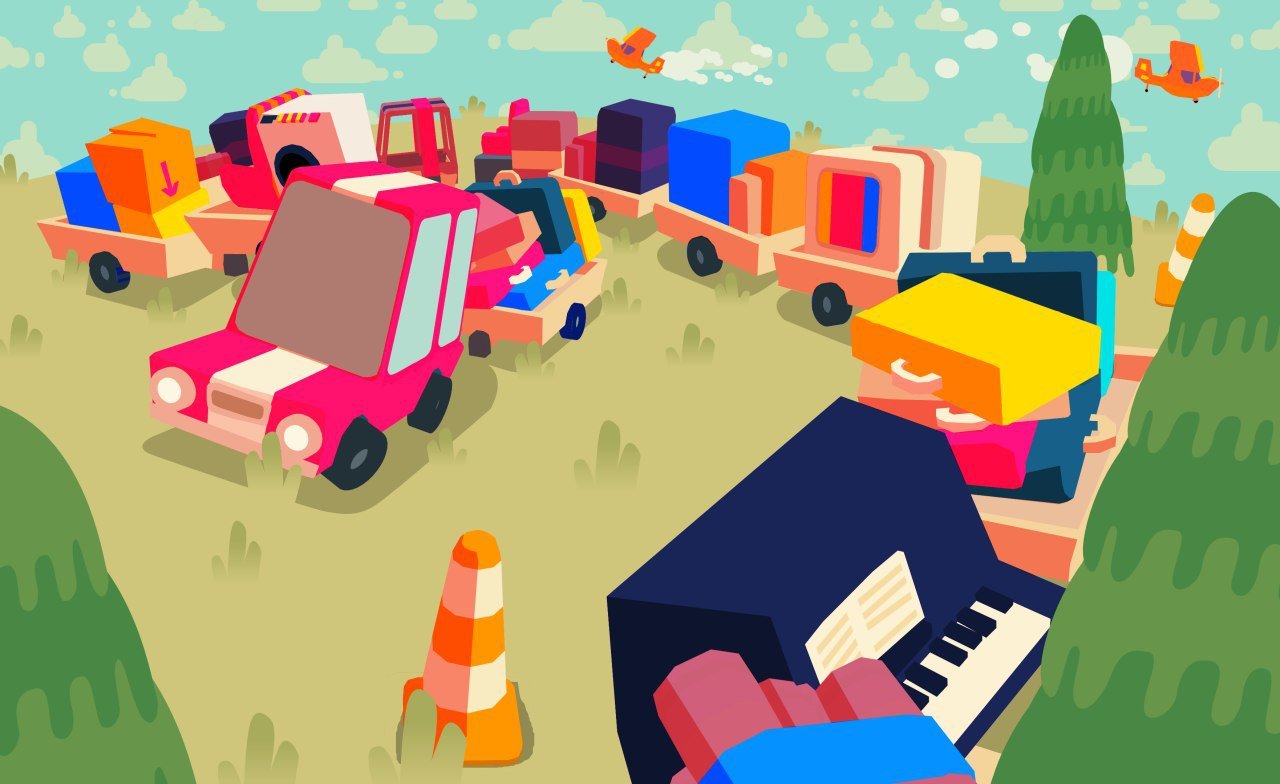 Once in a while a game comes along that reminds you why you love gaming. No dramas, no highly rendered animal anatomy. Just fun. This is it. The Finger Guns review:

It’s been said before in another review that some games are made to evoke a certain nostalgia trip. Games that play upon a familiar type of style that we all know and love from the past. Well, PAKO Caravan goes one further by essentially being a game we all love from the past.

Chances are a good 90% of you had a Nokia phone at one point in your life. With that comes an even stronger chance that you’ve played that one specific game on there, one that frustrates and delights in equal measure.

Well, PAKO Caravan is that, in essence. But rather than messing about with it, much like that awful Space Invaders: Invasion Day, PAKO expands on it. No faffing, no unnecessary tweaking of core gameplay. Just a good ol’ fashioned “take the framework and make it better” arcade game. Let’s join the trail and find out why.

If you hadn’t guessed it from my sly introduction, then that picture should give it away: PAKO Caravan is Snake. If you aren’t familiar with it, or were unfortunate enough to have a Sony Ericsson or Motorola, allow me to explain:

Snake was a top-down, simple-looking game involving, as you might expect, a snake. Starting off small, you guide the slithery sucker with the number keys up, down, left and right inside the confines of the screen. You eat things, avoid the walls and get bigger with each bite. The trick was to get as big as you could without hitting walls or yourself. Later versions had you go through one side of the screen to the other, but the core was the same.

Well, that is PAKO Caravan. But instead of limbless reptiles, you’re tasked with adding a caravan to the vehicle’s given vehicle. There are secondary objectives too, but the main tenet of this is to build a massive tail of trailers and try not crash into yourself.

It sounds simple enough, but don’t mistake that for shallow. PAKO Caravan is the pinnacle of “simply addictive gaming”, if one were the quantify it. It doesn’t need to complex or have a deep narrative to be fun.

The camera may be at a more isometric bent and the controls simplified to left, right, handbrake and jump, but it’s the same. You have no control over acceleration: you start the level and you’re off. Your handbrake lets you avoid pitfalls and crashes once you get used to it, but you won’t stop. Your jump has a recharge, and will help you in a pinch, but you’ll need your reflexes for steering. It’s still the same mechanic as Snake, inherently.

In this world of controversial Last of Us’ and God of War reboots, what we need sometimes is a little nudge that reminds us why we fell in love with gaming in the first place. Well, this is the game for it.

The throwback to “mobile gaming” before it became a sneer on the tip of the hardcore gaming community, the evocation of something so daft that it just works. You know that bit in Ratatouille, when the pissy food critic has that flashback to his childhood and remembers why he loves food?

That’s me and this game.

While the concept and execution may be simple enough, the game takes pride in the effort it’s made to look and handle as well as it does. First, the thematic levels and vehicles.

The first level is set in a carpark and as such, your first vehicle is a normal hatchback. Hitting one of the randomised add-on pickups (in that it varies how many you’ll add to your caravan) will add little pickup truck trailers. The farming level has you pull little hay bales, the airport themed one has you add little baggage carts to your stair cart. The warehouse level sees you tacking on barrel carts to your forklift, and so on.

It’s that attention to detail that makes such a simple concept shine. Like #Drive recently, it’s that something as small as vehicular changes and details is cared for that makes it great. PAKO could have stuck you with one car and said, “Deal with it”, but that it doesn’t is better for it. Again, like #Drive, this is also a mobile port, but one handled with care rather than chasing a quick buck.

Now, I understand that a game needs a little more than one thing to give it longevity. If the sole mechanic was just “make a big caravan” on different levels, it would tire after a while.

Thankfully, PAKO Caravan adds extra objectives into the mix too. Each level has more or less the same ones, with about a third being “make a caravan of X length”. Sounds simple enough, but on some of the tighter levels even that becomes a struggle.

Outside of that, there are cones to knock down, a hidden Wacky Waving Inflatable Air Flailing Tubeman® to find, as well as something thematic for the level. The airport-styled course has you launch five aeroplanes at once, the farming involves letting UFO’s abduct one hundred of your caravan. It’s all pretty straightforward but again, don’t mistake that for lazy.

There’s also an objective for collecting and spelling CARAVAN. But these letters only appear when you collect caravan pickups. So, you need to collect a word whilst your proverbial tail grows, making it no easy feat. I haven’t done it yet. Does it make me swear? Absolutely, but it also makes me want to try again.

This would normally be the part in a review where the but’s come out. “It’s great but…” is normally a favourite. Nope, the only butts here are the tail-end of your caravan that you’ll frequently bump into.

Simply put, I can’t fault PAKO Caravan. Could I grumble that the level requirements, in the form of objective-based stars, are harder to reach? Well, that just tells me I need to practice. Is it a copout that there’s only fifteen levels in what looks like a basic enough game to hold more?

No, because the depth of challenge in each one is more than enough to keep you going. If anything (and a rare example of me supporting this kind of thing), there’s scope to add level packs via DLC down the line.

I could complain about the twee music grating after a fashion, but there’s nothing stopping me turning it down. Any complaints I could find about this game would come from me, not from what the game does. What it does, it does well, and surely in this time, that’s all you’d want from a game?

Oh, wait. I don’t like how quitting out of a course takes you back to the main menu, not level select. Damn, and it was going so well…

At the end of the day, sometimes you want a game so simple that imbues the whole “one more go” mechanic that Tetris and Snake do so well. Saving Hyrule is great and all, but there are times when you just want a pick-up-and-play game to kill some time instead.

As you may have gathered, this is a glowing recommendation from me. It’s brilliant, it’s bright and fun, and it’s equally frustrating when you crash five trailers off a star. But then you find yourself going again, and again… and again, always trying to best it.

It doesn’t have all the mod-cons like multiplayer and leaderboards, but it doesn’t need it. This is how a game evolution should be: take something like Snake, make it bigger and more colourful, but keep the addictive nature just as it was. Go on, go back and beat that high score. I bet you can…

Taking an old mechanic pioneered on Nokia phones, PAKO Caravan is the evolution of Snake. But for what sounds so simple is actually a fantastic and lovingly crafted game in there. The very essence of “one more go” gaming.

PAKO Caravan is available now on Nintendo Switch (review platform) and mobile via Android and iOS.