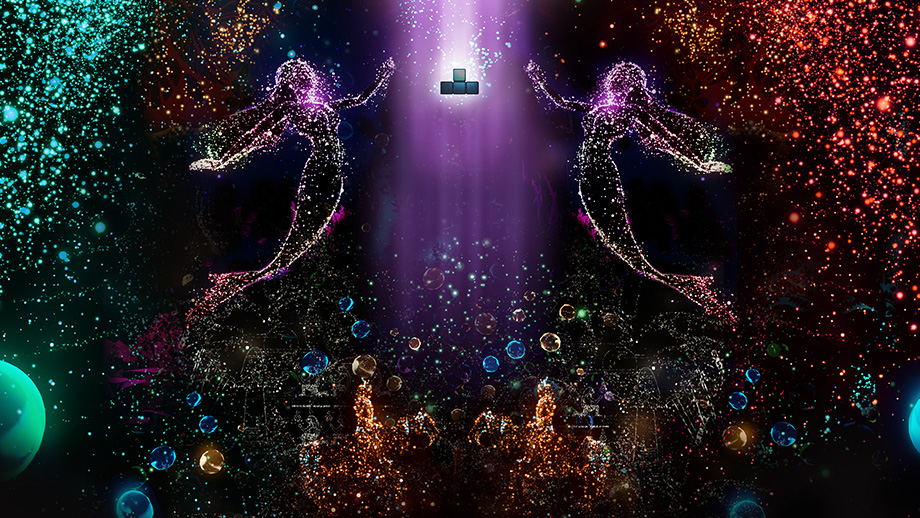 Many many (many) years ago I was staring at a green screen. There was a space shuttle ready to take off drawn in all its dot-matrix glory. The shuttle took off. And the game was won. I’m talking about the original Tetris of course, on the Nintendo Game Boy. At the time, that was as good as it ever was for a game about falling blocks of different shapes. I figured that was it. What more can they do? Forget all the crap remakes that have been and gone, forgotten and lost in the influx of candy crushes and bubble witches.

It’s surprising when you think about it, the sheer amount of versions there have been, on the sheer amount of platforms, that the game of Tetris hasn’t changed one bit. Well, it’s gone from monochrome to colour and there was that ill-fated 3D attempt but that’s about it. But that’s all changed now. Tetris Effect has happened. And it’s happened in the best possible way.

Developers Resonair and Monstars have taken the tried and tested formula and literally turned it on its head and have managed to do so without breaking the fundamental formula that made the original game so addictive. You still have the famous block shapes you know and love, nothing new there. But what they have done, which is a stroke of pure genius, is to link the game to a soundtrack. Every nudge, rotation, fall, and line clear is synced perfect to the background track, the more lines you clear the more ‘layers’ to the track that build up until eventually, you’re playing the game to an epic trance, dance soundtrack. If you have ever played Rez or Lumines then you’ll know what I’m going on about.

But there is more to Tetris Effect. No longer is it just a game of falling blocks that gradually get faster the further into the game you get. Now the speed that the blocks fall can depend on the beat of the soundtrack. You can be calmly slotting blocks in place on level one speed, but once you achieve a set amount of lines, the beat kicks in and the speed will whack up to 10 which, as you can imagine, becomes pure chaos, Leaving you and your perfectly designed stack of blocks a desperate mess. Don’t worry though once the tracks intensity dies down, the blocks slow again, allowing you to tidy up a bit and grab some lines. It’s intense, it’s fun and it’s simply a great idea to keep you on your toes and to mix things up without changing the formula.

To go with the various soundtracks (of which there are many and all really really good) each level has its own theme, providing a light show that would put Jean-Michel Jarre to shame. The use of particles brings the level alive as they pulse, beat, glow and swirl all in time to the music, get a Tetris and you’re treated to a particle light show that will put a great big smile on your face.

So that’s the fundamental basics. It’s Tetris with brilliant music and an amazeballs light show – but there is more. Lots more. There is a fair bit of depth in Tetris Effect. The main mode is called Journey, which sees you travelling the universe taking on the various levels, most of which are based on world themes. Levels can vary from the downtown Jazz City level (which is stunning) to the calmness of the Deep Ocean level with particle created whales floating all around the screen, to the stormy rainforest of Forest Dawn and the relaxing Da Vinci Sky. Fireworks, diamonds, snow, fire, deserts (stunning) they have literally thought of everything and each level is as much a visual delight as it is an audio treat.

Aside from Journey which is the main game you have a ton of different game modes to hone your skills with. These can be in the form of challenges. For example, see how many lines you can get in 3 minutes, or conversely clear 40 lines as fast as you can. If you’re really feeling insane you can try the master mode, which, well… I’ll let you discover that one yourself. There are also ‘playlists’ which are a collection of stages for you to play without fear of death, so you can just enjoy the experience, and in my opinion is a great addition because you really do just want to sit and enjoy and be mesmerised.  There are other challenges that require you to fulfil a certain brief; clear as many dark blocks as you can or a fun mode is where the game generates random I-tetriminos which fall randomly and so on. There is a lot here to get stuck into.

The last new addition to Tetris Effect might be the most profound. That is the ‘Zone’ feature. As you clear lines, a gauge is filled and will eventually max out. This dial shows how much ‘Zone’ you’ve accumulated and once the feature is activated decreases until empty. During a period of Zone, line clearances are paused, allowing you to drop a number of Tetrominos in one go. What’s more, line clearances are dropped to the bottom of the screen, allowing you to clear up any mistakes you’ve made a few lines deep of the surface with ease. It’s possible, during Zone, to clear more lines in one go than in any other Tetris title, even going as for as getting an “Octoris,” “Dodecatris,” and even a “Decahexatris” clearance.

All of this is your standard version of Tetris Effect, played on a TV and that on its own is enough to warrant a 10 score. But there is more. There is VR mode. No VR mode is not putting gamers in the pilot seat of a Tetrimino, flying down a tunnel ready to park it in its place. No this is the main game but in an entirely new reality. It may not sound like a bit deal, I mean you’re just playing the same game on a Tetris board in front of you. But seriously, once those particles I mentioned earlier are floating all around, that whale and the dolphins, swimming in front of your eyes, it’s an absolute joy to behold. Couple that with the amazing soundtrack, playing in the 3D headphones is an audio treat, your ears will thank you. With such stunning visuals and a soundtrack of biblical proportions, this game is one of most mesmerising VR experiences I have played to date. It all comes alive magically and you can’t help but just sit there and marvel at what Resonair and Monstars have managed to do with a game that is based on falling blocks. Just incredible.

Tetris Effect is better than I could ever have imagined. I watched the trailers with interest but I always thought “it’s just Tetris”, but it’s not. This is so much more than just another block dropper. Resonair and Monstars have reinvented something I didn’t think could be reinvented. They have created as much an experience as they have a game. No longer will Tetris be known as that monochromatic block falling game from the Gameboy (It was probably never known as that, apart from in my head) Tetris has all grown up and should rightly be known as one of the best puzzle games to ever grace a video game system.

Disclaimer: In order to complete this review, we received a promotional copy from the publishers. Please see our review policy for more information.