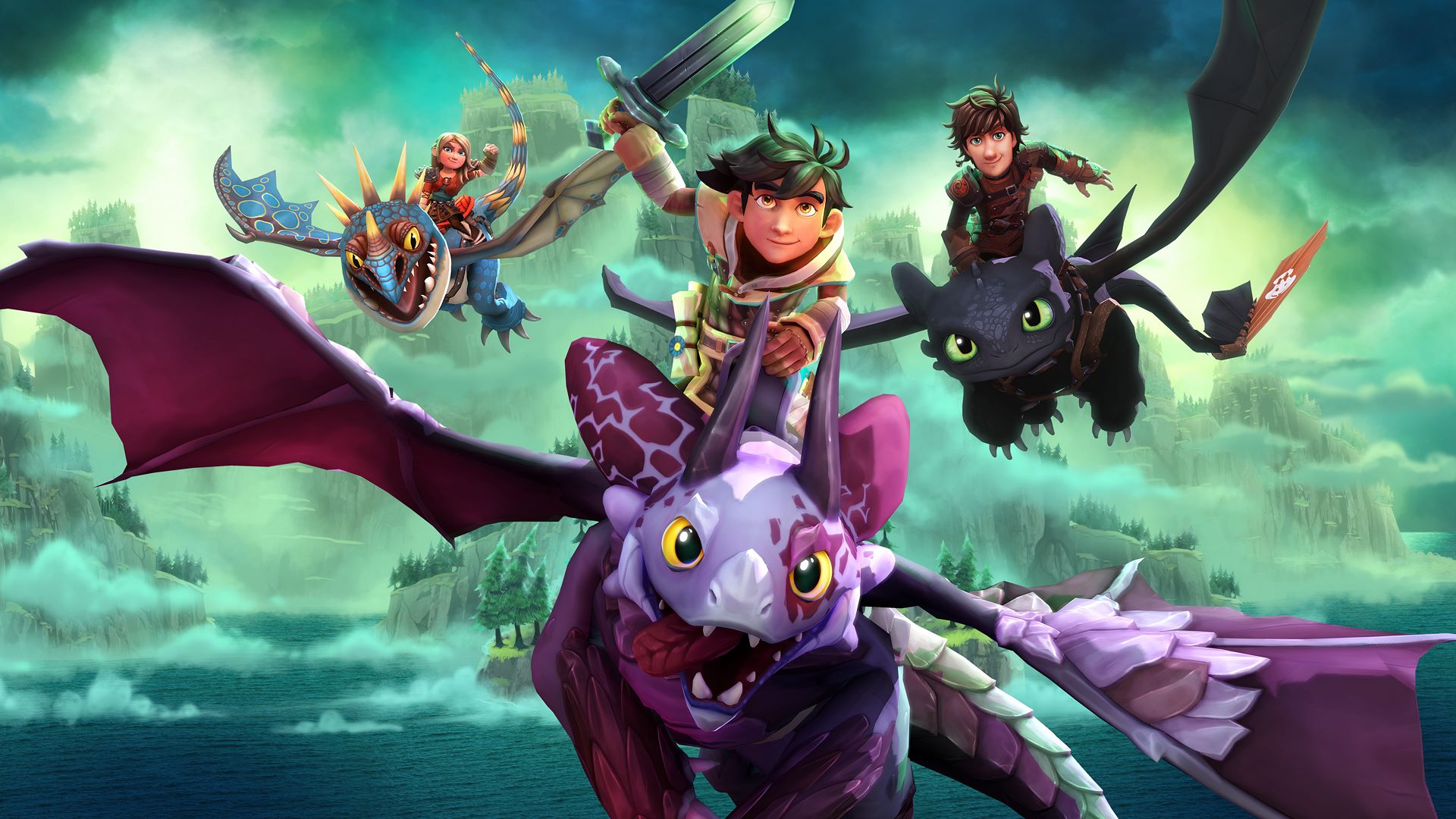 Dragons: Dawn of the New Riders is a solid if unspectacular companion to the movie threequel. The FInger Guns Review;

By all accounts, I shouldn’t have liked Dragons: Dawn of the New Riders. It’s a tie-in game to a series of films and TV shows I’ve watched with my kids but have no real affinity towards. We’ve not seen Dragons 3 yet. The game is supposedly designed for 5 to 12 year old’s, an age bracket I’ve been passed for almost 2 decades. And yet despite the fact that this game isn’t designed for me, I had some fun during my time with the inconsistent Dawn of the New Riders, as have my brood of kids.

Dawn of the New Riders takes place between the second and third ‘How To Train Your Dragon’ movies and works as a sort of prequel to the latest instalment (hitting cinemas on the same day as this game releases). It’s a stand alone plot but hints at the threats that Hiccup, Toothless and the rest of the inhabitants of Berk are yet to face without giving anything away. At the start of the game, Hiccup and Toothless are flying through the clouds when they see smoke rising from a nearby island. They land to investigate and come across the player character who’s suffering from amnesia. Unable to recall what happened to the village he’s in (which is little more than a smoking crater) or even what his own name is, Hiccup dubs the newcomer “Scribbles”. Before the pair can truly get acquainted though, a dragon poacher steals an odd looking egg from the remains of the village and runs away. Scribbles sets off in pursuit and before long, he catches the poacher and the egg hatches – but the dragon it contains is unlike anything anyone’s ever seen before. Able to use the power of ice, fire and electricity and described as a ‘Chimeragon’, Scribbles names this new dragon “Patch”. The pair then set off on a quest to investigate what happened to the village, why Scribbles has no memories and uncover the truth behind the origins of Patch the dragon.

This quest sends the pair to 2 further islands, each of which presents a new climate and challenge, and deep inside ancient ruins to face off against a persistent yet increasingly dangerous foe. This journey has a profound effect on the pair, especially Patch. To say more would be to encroach on some of the broader story details which, despite having some questionable character motivation, is a fun and surprisingly emotive ride to be dragged on.

The game itself is presented in a 3D, almost-top-down old school RPG fashion with a locked camera angle but with a zoom which alternates depending on what the game wants you to see. The game play beings quite simplistically. You move from clearing to clearing, fighting dragon poachers and avoiding traps which will chip away at your health. At any time, you can switch control between Patch and Scribbles with a single button press to use their unique abilities or work in tandem with one another, which is essential for aspects as simple as getting around the environments and overcoming obstacles. This begins with basic tasks such as using Patch to freeze a body of water for Scribbles to cross but escalates from there. Like any good game though, the difficulty increases gradually, first introducing very basic puzzles and few new enemy types before really ramping up the difficulty of the puzzles, the dungeon complexity and combat. The last dungeon/ruin in particular has some really fun block puzzles that require timing and the appropriate use of the heroic duo’s powers. There’s additional challenge areas in the game too, hosting tough combat zones and long form puzzles but reward the player with new equipment and resources.

There’s a rudimentary resource gathering mechanic in Dawn of the New Raiders. Open chests hidden around each area in the game or smash up scenery and you’re awarded with ore or plants/flowers which can be used to buy health potions from Astrid (who seems to be omnipresent in this game) or to upgrade and buy new equipment from Gobber. There’s only 3 weapons in the game, all of which can be upgraded 3 times, as well as an additional 6 pieces of armour so there’s no relative depth to this system but it’s a nice addition none the less.

Dawn of the New Riders boasts a number of boss battles, all of which star a famous dragon from the existing Dreamworks Dragons lore. Almost all of the boss battles alternate between using a recently unlocked power to outwit a dragon without direct combat before going toe to toe with a human foe. The boss battles do nothing groundbreaking but they range from mildly exciting to nail biting.

Combat is a tad two dimensional in Dawn of the New Riders. Scribbles can block with his shield and dodge roll away from attacks but all of his attacks are mapped to a single button – either tap for a quick swipe or hold for a slower unblockable heavy attack – which is a one way ticket to button mashing town. Patch is even more limited, unable to do any quick, close range attacks but can fire out one of his elemental blasts with the same button press as Scribbles.

In between levels, there’s also an air hub in Dawn of the New Riders for Scribbles and Patch to fly around in. There’s an easy map navigation system set up here to make sure you don’t get lost when travelling between islands and the game gives you amble opportunity to pull off those sweeping dives and under arch roles that Toothless and Hiccup made famous in there movie outings.

Visually, Dawn of the New Riders is in-keeping with the Dreamworks Dragons animation art style, full of bold colours and complementary palettes. The developers have really nailed the thematic feel to this game that makes it feel like part of the animated world, while not as detailed. The soundtrack to the game is equally as complimentary to the Movie/TV shows too, full of Celtic/Viking feeling tunes and big, pace setting drum beats. Elsewhere, there’s some rare frame rate dips when freezing water on a busy screen but otherwise, the game is technically sound too.

There’s a real attention to little world building elements in Dawn of the New Riders which gives it a lot of charm. When you walk through some trees, a flock of birds will fly out. Occasionally, you’ll see a tiny Terrible Terror dragon sitting on a perch or cliff edge that’ll fly away as you get close. When in the air hub, you can see massive dragons high up in the sea and ships sailing the oceans. As you rescue dragons from poachers, they return to a village in the game, allowing you to get up close and take a better look at them.

As an adult player, I can probably see more faults in Dawn of the New Riders than my kids do. I can recognise the inconsistency in the game design when an excellent dungeon is followed by a frustrating section involving a fog that can be burned away but hides arrow trap bolts being fired at you. I get irritated by the friendly AI that sometimes gets snagged on scenery or ignores my request for them to stay standing on a switch. The lack of vocals isn’t an issue but an occasional sound bite accompanying conversational text sounds completely out of place, such as Astrid laughing at something that’s not humerus in the slightest. There’s a number of flaws in this game, all of which offer absolutely no detriment to the enjoyment my kids get out of playing it. None. They love it, warts and all.

Climax have absolutely nailed the appeal to their target demographic with Dawn of the New Riders if my kids are any indication. My 6 year old twins, taking turns on the game, really enjoyed the combat (where I find it simplistic, they find it accessible), the flying and the early puzzles (they did need a hand with some of the later block puzzles) but they were both confused by the map structure during dungeon/ruin sections. They couldn’t fathom how each room connected to one another. My eldest son, 9 years old and a huge fan of the Dragons films and books, wasn’t initially enamoured by the game, disappointed that he didn’t get to play as Hiccup and Toothless and instead was playing as new characters. By the time he got to the second boss though, he was jumping around the living room in full blown excitement mode. Go figure.

To put it bluntly, Dreamworks Dragons: Dawn of New Riders is Oceanhorn for kids. There’s shades of Zelda hidden among the inconsistency with old school games design wrapped up in an accessible, child friendly movie tie-in game. While it’s not breaking any new ground, it’s a frankly enjoyable game for kids despite its flaws with a well worked plot that’s a delightful compliment to the big screen threequel.

Dreamworks Dragons: Dawn of New Riders is launching on Febuary 1st, 2019 on PC, PS4 (review version), Xbox One and Nintendo Switch in the UK.

Disclaimer: In order to complete this review, we received a copy of the game from the publishers. Please see our review policy for more information.