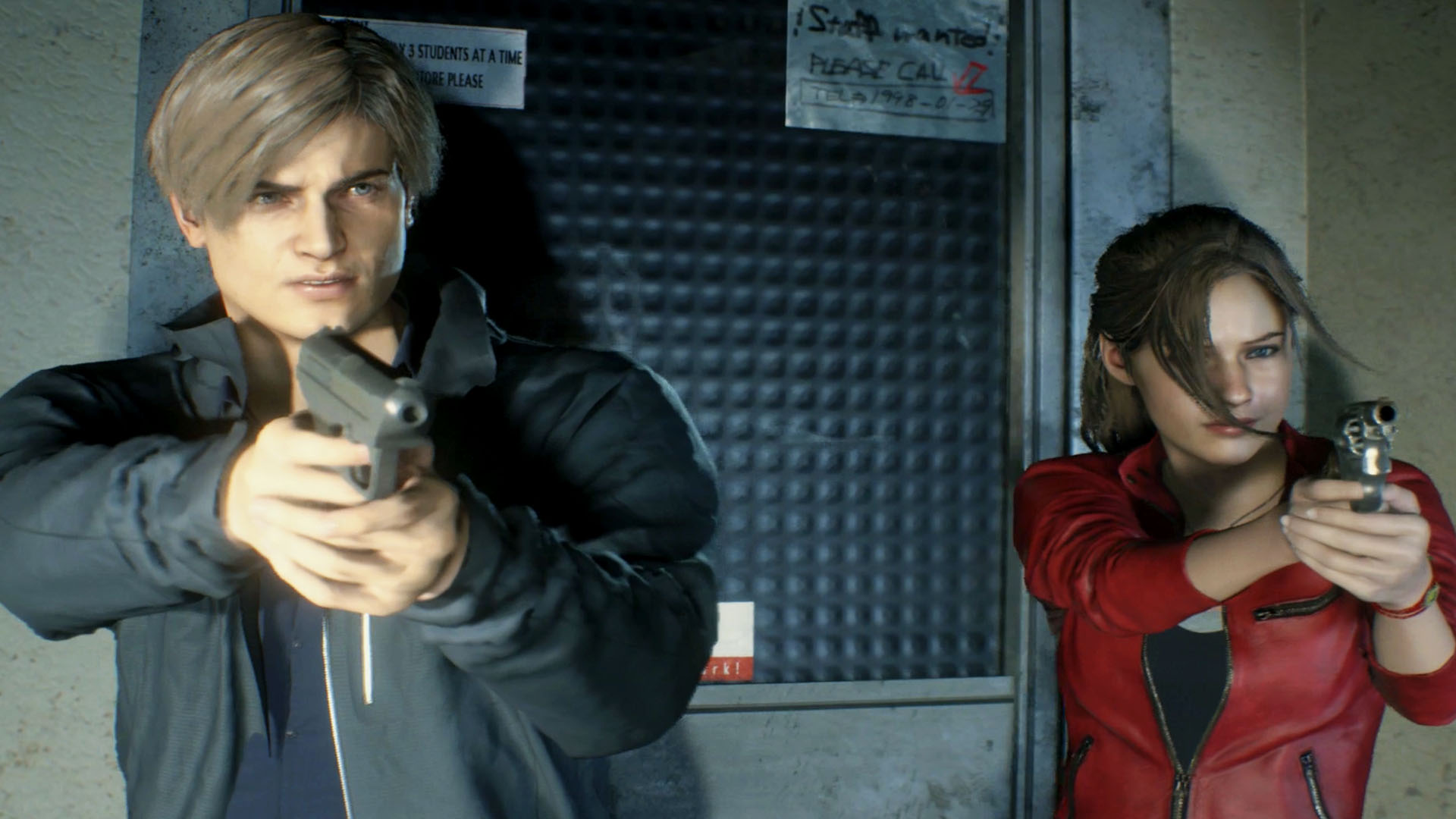 Taking the revered framework of a twenty one year old classic, and giving it the modern twist, how does Resident Evil 2 fare by today's horror standards? The Finger Guns review;

As a Resident Evil fan for more than half of my life, I’m one of those people that regards the first three numbered games, and Code: Veronica, as the good ones. The pinnacle will always be Resident Evil 2. Resident Evil 4 was downright fantastic too, and brought new gameplay to the series in its first redesign.

However, that was unfortunately run into the “over the top” action seen in 5 & 6 that were seen as a massive departure for the series. Resident Evil 7 returned to its horror roots, but channeling first person games like Outlast and Alien: Isolation, which whilst not terrible, wasn’t…Resident Evil enough for me.

So it was a mix of elation and fear when the Resident Evil 2 remake was announced back in 2015. Was it to be an upscaled redressing of the first game, or an action-based departure from what we all know and love?

It is with great pleasure that I can confirm to you: it is neither. Whilst the biggest change might seem be the over the shoulder camera perspective, it’s the entire game that has been given the reworked treatment.

But then, you didn’t come here to read what all the millions of adverts have been telling you, did you? You want to know if it’s good or not, and I can clearly say, “Oh my god, yes it is. Go and get it”.

Not The Same Song And Dance

I won’t bore you to death with the intricacies of the plot. It’s a twenty one year old story, and they haven’t really messed around with it. Capcom have, however, fleshed out the motives and reasons behind each protagonist and given more gravitas to each story.

For instance, I honestly forgot that Leon teams up with Ada to get a sample of the G Virus. All I remembered was that he gets embroiled in the faux-FBI agent’s agenda and was just along for the ride. This time around, they’ve really worked on Leon as the fresh faced and naive rookie police officer with a sense of justice he is.

Likewise with Claire, sister of Chris Redfield from the first game. Her investment from searching for her brother to becoming Ellen Ripley-esque protector to Sherry Birkin is much more improved on, and holds its own in the current trend of gaming storytelling.

But then, maybe that’s just me not paying attention or being old enough to comprehend those many years ago, as I was more invested in speedrunning (for that sweet, sweet rocket launcher). Either way, I found myself heavily invested in both narratives during my playthroughs.

Anyway, you didn’t come to me for the story. The biggest issue here, that it seems like I’m stalling on, is how does it play? The answer to that: exceedingly well.

As mentioned at the start, it was going to be met with trepidation when it was announced, but have no fear. Capcom have taken back the survival horror title they once held.

Taking away the boulder punching and zombie suplexes, Resident Evil 2 brings back the claustrophic, dimly lit and destitute environments in favour of that “I can hear something…?” tension. Survival is often the nature of the beast, as going toe to toe against several zombies isn’t a wise option. Oh, and the lickers? Stuff that. Following on from Resident Evil 5’s lore of them being blind (which is weird, as this is a prequel…nevermind), there’s no greater risk/reward that sneaking around them whilst literally holding your breath.

But then, that isn’t to suggest that the violence has been toned down. It’s merely an aide to longevity, especially in the early hours, as ammo and powerful weapons are scarce.

When you are tooled up and feeling brave, then the game starts to shine. As do the viscera, the headshots, the dismembered limbs, the charred corpses, the grotesque sewer…things. You get the idea. The RE Engine, last seen in Resi 7, has outdone itself here. Damage inflicted is contextual, adding the tactical element to combat. Sure, you could try for headshots, or take the legs out and evade. Better yet, take the arms off to stop a crowd following you through doors.

However, and take this as caution or a challenge, you are never encouraged to go full Rambo. There are some surprises in the dark, like an unseen licker or a later-stage enemy that catches you with an unforeseen one-hit death (which I swore at a few times). Now, if these weren’t enough, let’s talk about the biggest bastard of them all: Mr. X.

The Tyrant Amongst The Pigeons

Back in t’original, the never-actually-referred-to-as Mr. X was a Tyrant, much like the end boss in the first game, that was dropped in (literally) in either character’s B campaign to shit you up.

Just to add some much-needed spice to this already hot pot, this time round he’s in it from the first playthrough. Without pomp and ceremony, he appears after a few hours and is just relentless. The T-00’s mission is to eliminate witnesses, and he follows it with gusto. Unlike his predecessor, the Nemesis from RE3, Mr. X won’t let doors stop him. Once a feature exploited due to technical limitations, room’s were separate entities hidden as load screens. Nowadays, that’s not an issue, as we are able to seamlessly move from room to room. Unfortunately, so is he, and there’s no worse feeling than blindly fleeing into a dead end and watching evil Lurch step into the room to smush you to death.

If you are fortunate enough to have a surround sound system or headphones, you are able to vaguely pinpoint where he may be. But, and this is a warning: nowhere is safe. I thought the RCPD lobby was a haven because it had a save point, only to turn round and see him clomping down the stairs. I swore, I jumped, I put my pad down and resigned myself to my fate. Bravo, Capcom. Well played.

“Let’s Split Up, And Search For Survivors”

As mentioned earlier, A and B campaigns make a return too. What was a compendium piece to your first protagonist’s story, it allowed to see what the other was up to and how the stories intertwined. Unlocked by the same method as before, by finishing one player’s first story, it’s a slightly reworked, marginally harder “One More Time” mode.

Items are moved, locations have been worked around whether the A campaign player would have been this way or not yet, as well and different enemy placement.

So, you might be thinking, “It’s just the same but better, right?”. Absolutely, yes. Resident Evil 2 has taken something old and revered, put a modern spin on it, but kept the core elements and story as they were. It’s kept everything from the characters and story motives, and motivations, to the weapons and items, even the original 1998 time period it was first made in.

It’s a beautiful example of Capcom saying, “Okay, we hear you, trust us. Here is what we can do if you let us” and they have blown it out of the park with this.

At the time of writing, Capcom has announced more story-based DLC is on the way, as well as the original ’98 polygon character skins being made available. There’s already talk of RE3 getting the same treatment, but let’s not get ahead of ourselves.

So, is this modernising of one of the most celebrated sequels worth your time, or does it need a double tap to the head and left for [un]dead?

It deserves to the be held in as much esteem as the original. Cast any doubts aside, and pick up what is unquestionably one of the best third-person survival horror games to hit the market.

Oh, and you can play as glorious 4k tofu too, if you like.

Resident Evil 2 is available now on PS4, Xbox One (reviewed) and PC.

Disclaimer: In order to complete this review, we purchased a copy of the game. Please see out review policy for more information.