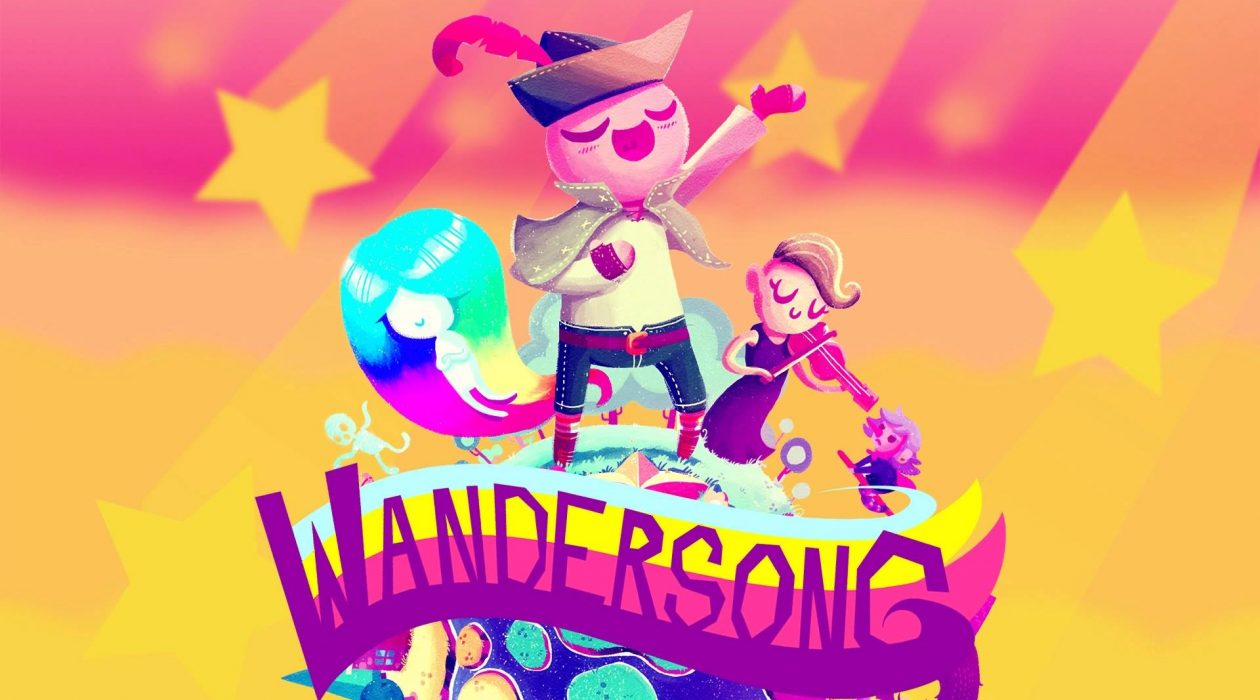 A harmonious marriage between narrative and mechanics, Wandersong is an astonishing creation on PS4. The Finger Guns review;

A harmonious marriage between narrative and mechanics, Wandersong is an astonishing creation on PS4. The Finger Guns review;

I’d heard a number of good things about Wandersong when it released on PC back in September 2018. I’d ask people “So, what’s so good about it?” and the almost unanimous response I’d get is “Everything”. I’d also seen that the user reviews on Steam were so unanimously positive that Valve repeatedly evaluated them to check that they weren’t bots trying to game the system. Unfortunately, my current laptop struggles to run Chrome, never mind any kind of game, but with the PS4 release of Wandersong I finally managed to get my grubby mits on it. And by jove it is glorious.

Wandersong is the story of an effervescent bard who’s out to save the universe. The goddess Eya, who “sang the universe into existence”, has grown tired of this world and how it has become so divided. Like countless times before this, Eya chooses a hero to slay a group of supernatural ‘Overseers’ that control various aspects of life, thus triggering the end of the world so that she can sing life into a new one. The bard is not this hero. That’s made very clear within the first 5 minutes of the game when he’s presented with a sword that he can’t lift above his belly button, never mind swing around. No, The only slaying that the bard does is on stage, with his awesome voice. Instead, the bard AKA “lil’ b” AKA “That annoying guy who always seems happy” is attempting to prevent the end of the universe by collecting all of the elements of “The Earthsong”. This tune, a part of which is held by each Overseer, when sung should unite the world as one, putting divisions aside, to save the world. Getting the Earthsong, however, is going to something of a challenge…

To say anything more about the plot to Wandersong would be to do you, the reader, a disservice. I went into Wandersong almost blind and I’d advise you do the same. What I can say though is that the story in this game is one of the most endearing, most charismatic, most relatable tales I’ve ever had the pleasure of experiencing. Despite it being a tale of saving the universe, of meeting mermaids and pirates, of stepping into a dispute between 2 warring nations and of settling the disputes of ghosts, it’s also very human in scale and moving at times. I’ve not connected with a cast of characters like I did with Wandersong in years. The dialogue, presented in nothing but text and blips and blops, is wonderfully crafted. During the games 15 hour length – all of which is progress because Wandersong doesn’t have any typical failure conditions – I spoke to every single character I came across and didn’t skip a single line of it because every one of them had something worthwhile, entertaining, funny or informative to say.

Every aspect of Wandersong is built around the singing prowess of the bard. The right thumb stick of the Dualshock 4 controls the bard’s powerful voice. Press the thumb stick in any direction and a circular reticule appears, made of colourful blocks. Each block represents a different note for the bard to sing and when you push the thumb stick in that direction, the bard belts out that note (even propelling his voice through the speaker in the controller, if you’ve got that feature switched on). This mechanic permeates every single aspect of Wandersong from the aesthetics, the level design, the puzzles and the narrative. The whole game is built on that innovative foundation and is used in a plethora of imaginative ways. For example, towards the start of the game, there are white birds flying around that chirp out a particular tune, which is visually represented like the bards singing circle. Match the tune with the bards voice and the bird will join you, enabling you to do a kind of double jump. Later in the game, the direction in which you push the right stick beams out light in that direction which can be used to light up a darkened world. Even when you’re not using the bard’s voice to progress in the game, singing effects the world around you, making dogs smile or changing the colour of flowers.

Using the singing mechanic as its main driver, Wandersong features some truly inspired games design. New and surprising yet instantly intuitive ideas are introduced from start to finish. These are often creative, letting you solve narrative puzzles in your own unique way, like formulating a song for a band to sing. Others blend the narrative and game play into one seamless objective. There’s platforming too, all of which is far more interesting than the usual fare. Wandersong is a master class in accessible and captivating game creation.

Visually, Wandersong looks like a felt diorama brought to life. It’s a really smart visual choice that manages to portray real depth, despite being entirely 2D. What’s more, there’s a real intuitive mechanic which changes the focus point when changing platforms. Jump to a layer in the background and the foreground blurs a tad to let you know which layer of the world you’re currently walking on.

As for the audio, as you might expect from a game which is primary based around singing, the songs, effects and general ambiance of Wandersong is sublime. The soundtrack explores a lot of musical genres which complement the visual feel to each chapter and area in the game. The game does menacing tones as well as it does chipper backing tracks that make you want to skip through a meadow while humming along to it. Really top work here.

I have 3 tiny complaints about Wandersong that I feel are so miniscule that they’re barely worth mentioning – but I know they need to be. During one chapter of the game, the time of day becomes a relevant factor. Important characters only appear in relevant locations during certain periods. Time passes when you do things or talking to someone in the game but sometimes, you’ll discover that the path forward has just past you by and you need to wait for a full day to progress. You can advance time by sitting on a bench but I’d have preferred it if the game allowed you to do this via a button press instead. It really breaks up the pacing during this section which is otherwise exemplary. Secondly, during one section of the game you’re fighting against (and using to your advantage) a strong wind. Here you ride atop a flying sea lion type creature to cross large gaps but during one section, there was a glitch which meant my voice, which guided my stead, didn’t seem to work. After failing a few times and being transported back to the start location, the game suddenly allowed me to proceed unaffected. Lastly, one of the PlayStation trophies is glitches. I know. I know. I don’t particularly care about such things but I know there are those of you out there that put stock in those virtual tin cups and that’ll be vital information for you.

These tiny issues (I told you they were tiny) don’t tarnish an otherwise wonderful title. There’s so much charm and attention to detail in Wandersong that builds a compelling, wholesome world around a story of love and friendship, of finding common ground in a world full of conflict and of finding the thing that makes you special. I think you know that a game will stick with you when you finish it and like Edith Finch, Life Is Strange and Night In The Woods, this game will stick in my memory for a long time to come.

Plus, you can bounce on all the in-game beds.

Disclaimer: In order to complete this review, we purchased a copy of the game. For more information, please see our review policy.

If you enjoyed this, or anything else we create, please consider supporting our Patreon.