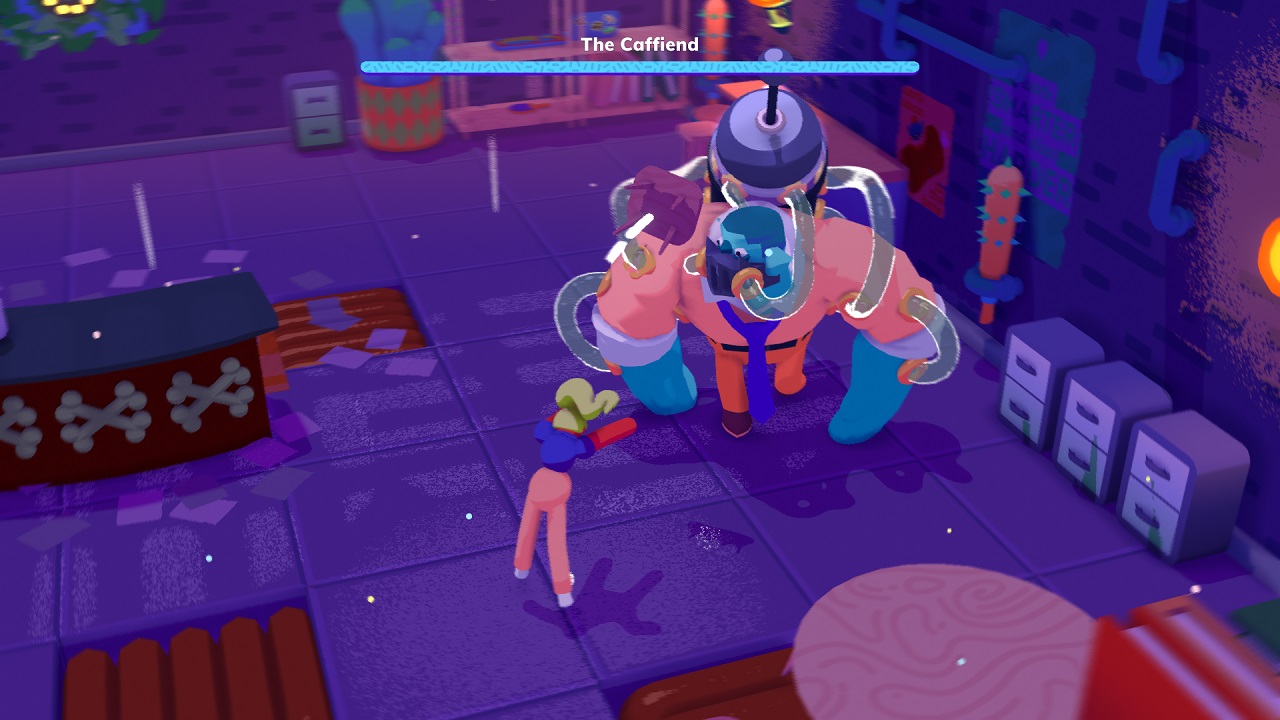 Going Under is a fun time, even if that time is a little shorter than we'd like. The Finger Guns Review;

Indie games are a great way to quench your gaming lust as you wait for the next big AAA title to hit. Roguelikes are especially apt given their seemingly endless replayability.

Team17 are the latest publisher to throw their roguelike flavoured hat in the ring with Going Under, the first game from indie team Aggro Crab.

So what is Going Under all about? Well, it’s not about taking a trip to Australia. It is, in fact a game about a tech start up company that seems to have a mighty problem with monsters in their basement. Unlike the stale clinical environment of a real tech start up office, Fizzle (the company you’ve just started working for) is a bright and vibrant office with an abundance of humour. You play the excellently named Jackie Fiasco, who’s just started the intern position at Fizzle drinks.

The premise of the game is pretty simple: your boss, Marv, wants you to head down below and clear out all the beasties from the three other start up companies – or ‘dungeons’ – that are running wild: Joblin, Winkydink (a dating app) and Styxcoin (a bit coin spoof). What ensues is randomised dungeon crawling in the most colourful way possible with the idea of each being to reach the fourth floor and defeat the boss. Along the way you may find hidden rooms for some level abilities, or shops to buy heart containers and other goodies. There are also optional challenges that appear at random if you’re feeling brave.

To help Jackie in her mission she can pick up pretty much any object and use that as a weapon during the scrappy fights with the monsters. When I say anything, I mean anything. One great weapon is the stapler, once picked up it becomes the size of the main character and fires giant staples everywhere. It’s great fun, if a little hit and miss and button bashy.

I’m not going lie to you, you’re going to get your ass kicked in this game. So hard in fact that upon loading the game, you get some options to make it easier. This might be a good idea, just to get the feel of the game because you will get kicked all over the place. The level abilities you find throughout the game are a god send, but there is extra help from Hauntrepreneur, a vampire that offers some real good and powerful upgrades… if you are willing to take on a curse. Like only moving forward. Funny, but made near impossible to play the game. Only the brave should take on these extras

Each of the dungeons, as you expect increase in difficulty but at the same time are just about varied enough to help keep things fresh, I mean the randomly generated dungeons do a pretty good job of that but the three distinct companies offer different challenges and rewards. The humour on show throughout is spot on, especially during the Winky Dink levels where the social buzz word ‘ghosted’ is used to great effect.

As far as roguelikes go, this one certainly gives a bigger emphasis on story than most. With an interesting bunch of characters that mumble in odd sounds as the story unfolds via dialogue boxes. For bite size diversionary chunks this is a good fun. The vibe of the game kind of reminded me of Mythic Quest on Apple TV+ Unfortunately  as fun as the game can be at times, it didn’t give me that hook, that one more run itch that the genre is known for. The Dungeons, as pretty and vibrant as they are, are simple affairs and straightforward with no real need for exploration.

The combat, despite having evade moves and throwing moves inevitably end up with you bashing the buttons as fast as you can. and with all the scenery breaking and exploding as you bash away at the buttons it can be easy to lose track of your character. As you can imagine, that can tire pretty quick.

That’s not to say I didn’t enjoy my time with Going Under, just discovering the ridiculous things you can use as a weapon is a USP on it’s own, the art style will keep you engrossed in the short while you play the game, but as mentioned there is nothing really there to keep you coming back for more.

Going Under is a fun if short lived game. A nice bright roguelike that just fails to have that one more go feel to it.

Going Under is out now PlayStation 4, (reviewed) Nintendo Switch, Xbox One, Microsoft Windows