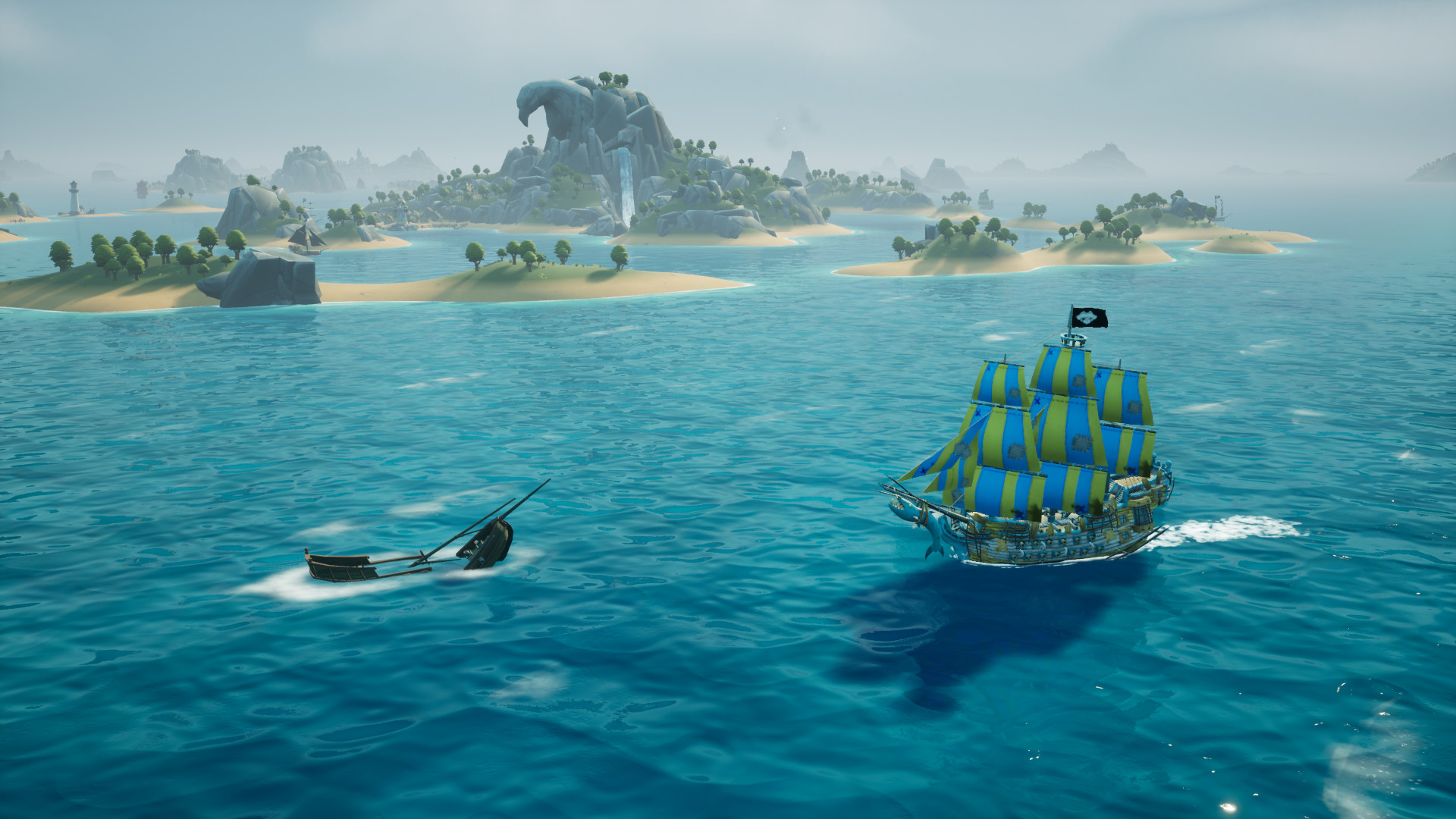 Arrrghh vast ye matey! Come set sail upon the wondrous seas and tell tall tales of being framed for the death of the King and turning to the great pirates for a life of swashbuckling and freedom! Batten down the hatches, bring a spring upon er* and give chase for the ultimate pirate tale in King of Seas.

King of Seas – from Italian indie studio 3DClouds and published by those lovely scamps at Team17 – is a top-down procedurally generated pirate adventure that’s more chill than a bottle of Coors Light in the hands of Jean-Claude Van Damme. Essentially if you’ve just come off the back of Returnal and need something vastly more mellow then you could do worse than to join the pirates of your ship to clear your name and sing a bevvy of sea shanties along the way.

The more relaxed atmosphere of King of Seas is what attracted me to the game a while ago upon seeing the games announcement trailers. You can rarely go wrong with a game slapped with the Team17 logo upon it and it’s no different here, with a fun story, humorous dialogue (which I added my own voice to far too many times) and characters that complement the ‘easy-listening’ style of gameplay well.

The story goes – if you didn’t catch it in my highly researched pirate lingo above – that your father, the ruling king of your tropical kingdom has been killed and your – seemingly gender-neutral – character has been framed. Turning to a life of piracy, it’s up to you to clear your name and discover the truth behind his death before you’re captured by the royal warships chasing you across the seas.

Living by your own pirate laws – though strictly keeping to the pirate code – you’ll captain a pirate ship that’s not particularly impressive and head on your way across the randomly generated seas to clear your name and have quite the swashbuckling adventure on your path to redemption.

And not wasting any time at all, that’s about where King of Seas kicks off. It’s here you’ll find your way around the islands, which are scattered and plentiful of quests, upgrades and goods for your ship such as repair kits, wood to trade and fix your ship whilst out at sea – it can be fixed by carpenters on each island if you have enough gold –  though there’s little to see when you arrive on an island save a menu screen to work through in order to secure your goods or sell items you’ve acquired on your travels. I would have enjoyed exploring the islands a little more and taking control of my character. Ergo, your only control is of your ship across the seas.

The story is told primarily through text and dialogue through the large cast of beautifully drawn characters you meet across the islands. The dialogue is well written and snappy, allowing you to zip through conversations and get all the details you need as quickly as possible in order for you to head back out to sea and explore. You don’t need to stick too close to the story either as you’re able to explore your surroundings and the game map is simple enough to understand (head to red circle. That’s about it). There’s a definite Monkey Island vibe buried deep into the King of Seas DNA, and it’s all the better for it. Particularly in the dialogue and the snappy wit, particularly from your fellow pirate characters. The royalists are naturally far more stuffy and posh, allowing you to give them fun voices should you please. Again, I found myself doing this an awful lot.

But goshdarnit you’re here to be a freakin’ pirate and King of Seas embraces the badge with aplomb. It’s nowhere near the depths of say, Sea of Thieves, so don’t jump in expecting an indie version of Rare’s behemoth, but there’s plenty of piratey goodness to scratch the itch. As you sail the seas you’ll come across loot in the waters which you can either keep or trade with the merchants on the islands, as well as sunken ships which have their booty still very much available.

You’ll find yourself in skirmishes and beating the ever loving crap out of the warships intent on sending you to the depth of Davy Jones’ locker. The combat is solid, if unremarkable and a little fiddly at first. It works by circling your enemy ships, firing cannons from either side of your ship, whichever one is facing your enemy. Again, it appears overly complicated at first but once the knack is nailed, it’s a breeze. Targeting directly at the hull of the enemy ships with cannonballs is the most direct way to take them down, though you have a multitude of weaponry onboard. These can naturally be upgraded to turn your ship from a dinghy into the Black Pearl in no time. Ever used a pirate ship with a flamethrower? Exactly.

A word of advice though; in the early stages you’ll come across ghost ships in the evening that appear and will chase you around until they take you out. They’re not especially fun to have nearby and if you’re not accustomed to the combat system just yet you’ll get ripped to shreds. Quick maneuvers are the order of the day here, and ensure you’re sailing the same way the wind is blowing. Otherwise you’ll be joining their ghostly crew quicker than you can say ‘Savvy?’. There’s a definite challenge to the combat, and it’ll take a couple tries or more to really nail. It’s not as easy as the game makes it out to be. At least, I certainly didn’t think so.

There’s plenty of reasons to find King of Seas delightful, namely the visuals, the calm nature of the gameplay loop and the overall sense of freedom on offer. The procedural nature of the game allows the game to feel relatively brand new with each playthrough, and whilst I once played in a six hour sitting and then went back the next day and couldn’t find anything, there was a joyous aspect to yet more discoverability. The game offers plenty to be getting on with so tearing it around meeting new characters and finding new locations never really gets old. The story remains in place regardless, you’ll just need to find your way round again.

I’ve tried not to compare King of Seas to Sea of Thieves because they’re so tellingly and obviously different in their approach to the pirate adventure experience. Think of King of Seas as Sea of Thieves’ little brother that went on a gap year to find himself and came back immersed in a zen-like state for all eternity, mellowed out to within an inch of his life and in no real rush to get ‘stuff’ done because it’s more fun to just tear it around the seas at night and spot the little differences in the lighting on each island.

That’s what King of Seas is, and it’s delightful.

*To turn the ship in a different direction. You’ll be doing a lot of that in King of Seas.

King of Seas is a delightfully chill and humorous title that’s best experienced on a Sunday afternoon as you wish you were a swashbuckling pirate taking down warships with enormous cannons. Whilst the combat can be fiddly and the procedural nature may play with your sense of direction somewhat, there’s plenty to enjoy in this light-hearted sea tale.

King of Seas is available May 25th on PS4 (reviewed on PS5), Xbox One, Nintendo Switch and PC