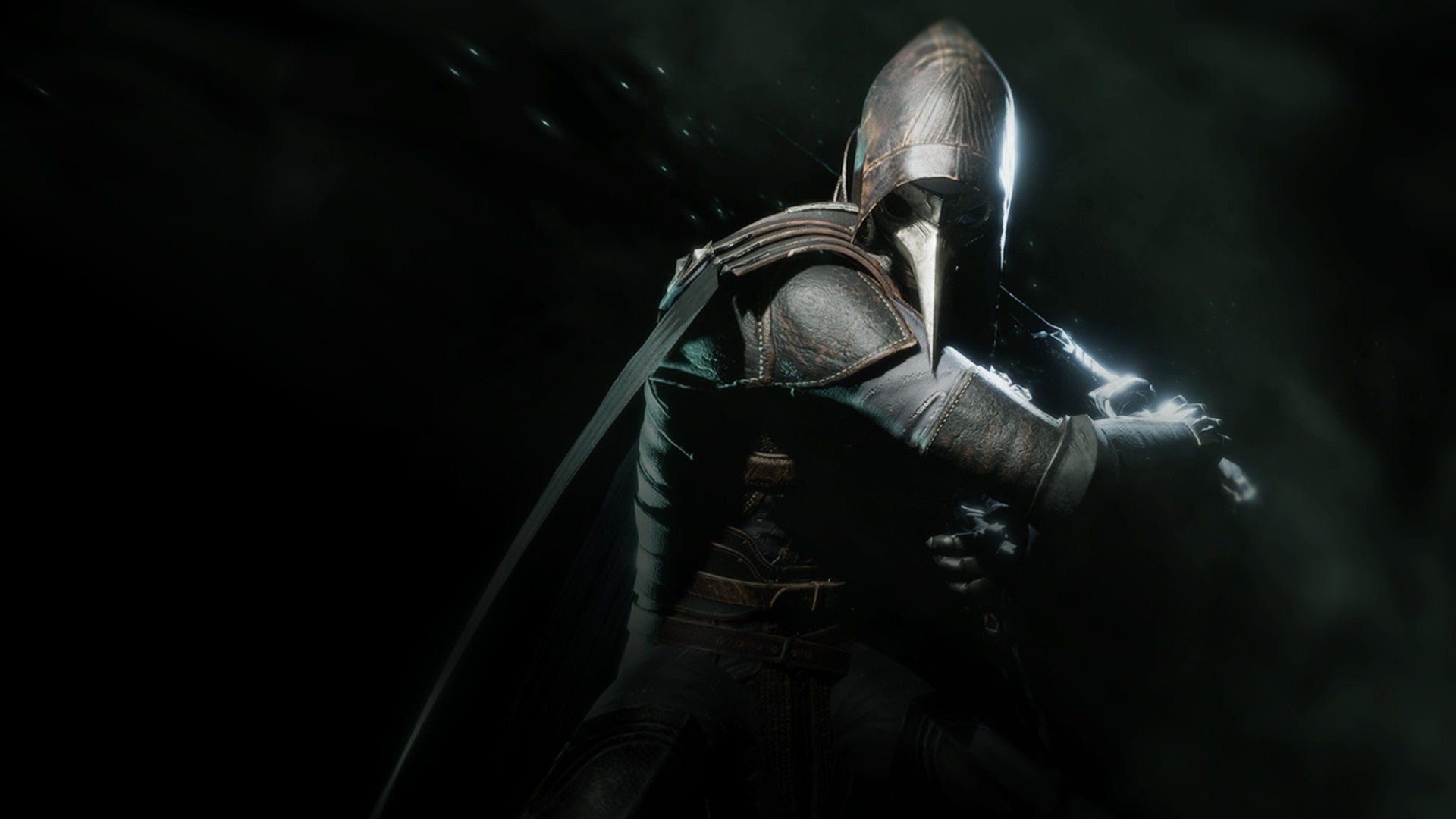 A grim, dark fantasy hack-and-slash very blatantly wearing its influence on its sleeve, Thymesia is still an entertaining challenger. But does it leave a lasting memory? The Finger Guns review:

Another day, another imitator aiming for the Soulsborne crown. Yet whilst most copycats follow the standard Dark Souls template, there is hope that one of the other FromSoftware stables will get raided. Thymesia, in that regard, is no different, but at least it’s aiming for the Bloodborne’s crown rather than the one atop Dark Souls’ head.

A dark and decimated land, a horrible plague twisting the citizens, paired with fast combat that relies more on attack than parrying; it’s got all of the hallmarks. But whilst that sounds like derision, it’s actually welcome to see this angle over a “standard Dark Souls template”. Heck, protagonist Corvus even has a cape too, just for imitation points.

So, without further ado, let’s see if OverBorder Studio has done a decent job, or made something forgettable…

The Darkest Of Times

The problem with reviewing a game like this, or any Souls, is not wanting to spoil the story. Half the battle is finding out why you’re persisting, so for me to give it all away removes the incentive to do so. In that regard, I won’t give away too much. But I will give more than the game initially does. Fair? Thought so.

There’s a plague, but this one isn’t blood-derivative. It’s fungal, by the looks of it, causing similar parasitic tendencies like the Cordyceps one (or at least the fictionalised kind akin to The Last of Us). It’s making people violent, ravaging the land and basically, bad for business. This is where the protagonist Corvus comes in, plague doctor mask and swishy cape in tow.

You, Corvus, are an amnesiac. You, the player, are trying to find out why he’s this way, who he works for (or was ordered by), and why a little girl named Aisemy keeps talking in bloody riddles at you. Given that Thymesia means “memory” in Greek (I didn’t know this, by the way) it’s pretty on the nose in terms of framing devices.

Story aside, the main draw with games of this ilk is the combat. Some imitators confuse challenge with “ridiculously hard enemies” and thankfully, Thymesia doesn’t fall into that trap. Well, at least mostly.

Combat is quick, and favours dodging over deflection for the most part. Armed initially with a sword and dagger for combos, Corvus doesn’t have the handicap of a stamina bar to hold him back. So flurrying combinations is key, becoming a whirling dervish of death when possible. However, some attacks/combos don’t interrupt enemy attacks, so you can still take damage whilst attacking.

There’s a blocking/deflection mechanic, but the timing is fiddly and can accidentally be locked out. My preference, as I like Bloodborne over Dark Souls, is dodging about and striking, like a mosquito with a vendetta. Parrying just doesn’t feel worth the effort, resulting in more damage for your troubles.

Certain skills (which we’ll get to) allow some sweet-looking counters, too. There’s a dodge skill akin to the Mikiri counter in Sekiro: dodging into a certain attack will vault Corvus above for a drop slash. It looks cool, for one, and rewards charging into danger for results.

The other draw of the combat is Corvus’ Nero-style claw ability. Set to the default “charge” attack of R2 [on PlayStation], this special attack has a secondary function. A charged attack will not just hit, but will absorb the type of weapon an enemy is using.

So, if they’ve got a knife, Corvus gets a single, special attack. If they have an axe, or halberd, you get a different attack. You get the gist. Similar to the prosthetics in Sekiro, each drawn weapon has a unique attack to it. The bonus is that these don’t use your special meter, but they are single use.

To get a permanent second weapon, players will need shards to unlock these secondary weapons. These will use “magic”, but don’t disappear. So, the trick is to mete out your magic bar, or if needs be, steal a single-use special attack from an enemy. For example, I was stuck on a spear-based mini-boss. It took me a few attempts to think of fighting fire with fire, but turns out stealing his weapon skill and using it against him has its perks.

There’s also bonuses associated to the type of plague weapon players use, so it helps to fiddle around with what suits you best. This is turn also helps with the type of Corvus build you want.

When I say build, don’t expect massive amounts of reign in terms of levelling. There isn’t many options to choose from; there’s three, in fact. Vitality, Strength and Plague are it, all of which should [hopefully] sound pretty self-explanatory. Plague is the special attack, by the way. A rose by any other name, etc.

But it’s the skill trees that make up for it. Corvus’ skills are based on several trees: his saber, dodging, deflecting, the claw and feathers. The latter is an interruption mechanic some might like, but it wasn’t for me. Each skill, or Talent, point is accrued after every level (putting a stat up) and can be distributed however one sees fit.

You can lock out parrying in favour of damage-reducing blocks, for example, or gear towards dodging instead. Saber combos can be enhanced, as well as overall buffs for Corvus or debilitating offense skills towards enemies. Fortunately, they can be reset cost-free, which came in handy against the game’s first major boss for me.

Without giving too much away, it’s very parry-heavy, which I’d initially locked. So, a quick reset later and I was on better terms. Still ridiculously tough, though. This is a Souls-like after all.

Speaking of Souls-like, again, there’s one glaring flaw here that really exacerbates the difference between FromSoftware and its imitations. It’s in the handling, specifically how Corvus gets about the place. There’s a weird… disconnect that looks and feels like he’s floating. Not to the terrible degree of Sonic in Sonic Adventure, but noticeable enough.

The other, most egregious issue is the hit boxes. For those unfamiliar, the layman’s is the area around a player/enemy that registers damage. Think fighting games where blows connect, or even Bloodborne/Sekiro for how it’s done properly. Here, by comparison, is some straight up bullshit. You can dodge behind an enemy and still be hit by its forward swing. For a game that relies on precision combat, this massively misses the mark.

Aside from technical issues, the only real negatives I can pin on Thymesia are the short “levels”. There’s only three main areas, all of which are pretty linear in terms of progression. It’s the usual tact: follow main path, occasionally divert for a secret path and/or something shiny.

Players who eat Souls for breakfast will make good time on this adventure, which itself is only around the ten hours mark. Those who struggle, however, will get their money’s worth by some sneaky boss fights.

So, the only thing to really comment on, as hinted above, is the difficulty. This is normally what imitators get wrong: Soulsborne’s aren’t relentlessly hard, they’re paced. You “get good”, tackle an area, hit a new wall and grind until you can knock that metaphorical bugger down. They are not “be hard for hard’s sake”.

In most aspects, Thymesia gets it right. There’s a decent challenge to climb through the levels, with some bosses that will take repeated attempts to learn patterns. However, it does rely on the bad-guy-surprise-from-the-corner trick too much to be funny, as well as the hitbox issue.

Thymesia will have you stressing as much as you’ll be relieved when you progress, but it’s still a bit rough in some areas. But then, it does allow you to reset and reassign skills for free, so you have that malleability to adapt. Is it perfect?

No, but nothing some TLC can’t hopefully fix. OverBorder are only a small studio, so what they’ve done here is nothing short of impressive.

To summarise, I like Thymesia. That is to say, I like the parts of Thymesia that remind me of better games. Whilst that sounds like a back-handed compliment, it’s actually praise… in a back-handed way. See, that it reminds me of them encourages me to continue with this one. It’s a good looking game, for one, with an equally atmospheric score than unnerves at moments before ramping up the next.

It is a little rough around the edges, which may cause some additional frustration at times. Yet if this can be a labour of love for a small team, then perhaps we can let them off a smidge. If OverBorder make enough to keep this going, then some spit and polish would be very welcome. It’s hard not to make comparisons to Bloodborne, but as said, it should be embraced.

It is a little rough around the edges, which is to be expected from a small team and backed by an indie publisher. Stick with Thymesia however and you’ll make some good memories with it, hopefully with some care down the line to refine the experience.

Synergia Review (Switch) – Love In The Time Of Synthetics
Who Needs Next Gen? How to be Happy With Your Current Console
Behold the Kickmen (Switch) Review – Go Forth and Kick!