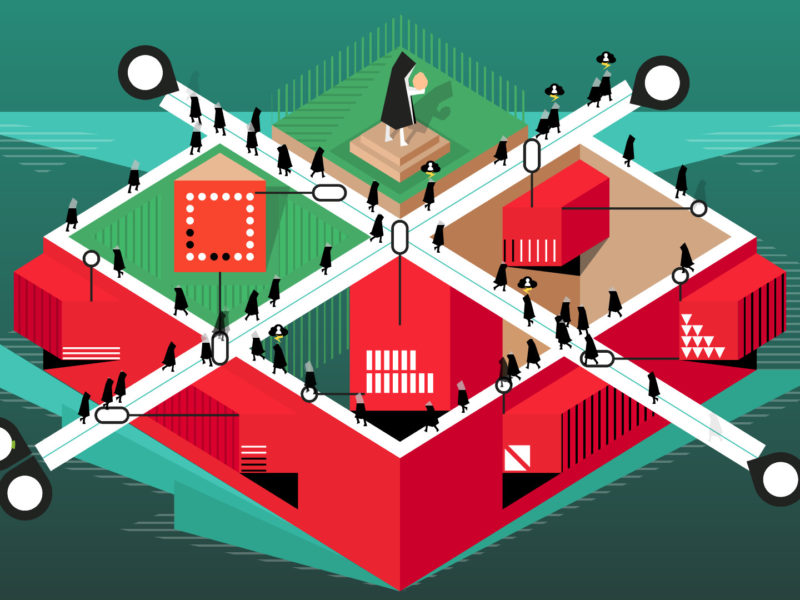 A tower defence puzzle game through a tongue-in-cheek capitalist lens, Rip Them Off is fun for a time but quickly becomes frustrating. The Finger Guns Review.

When you go into a supermarket for one of the essentials – milk, bread, loo roll, etc – you can almost guarantee that none of those items are going to be near the entrance. They’re always near the back and that’s by design. That’s so you’ve got to walk past other things you might need to buy or items that are on sale to encourage you to spend more. If you’re honest with yourself, you’d confess you’ve probably fallen for this at least once in your life. “Oooh, chocolate brownies for £1. Sold”. I’ll admit it – I’ve said that too many times. This is the lens that Rip Them Off [Steam], a puzzle game that’s kind of like a tower defence game revolving around taking as much money off of passing punters as possible.

In Rip Them Off, you’re working for an omnipotent entity known as “The Board”. This group demands profits and will not accept any excuses. To reap those profits, you must place shops where they’ll have the most effect. The shoppers, (un)affectionately known as Dupes, will enter and spend in every shop they come across but will only ever enter a certain type of shop once and won’t queue to enter. That means that if a shop is full, they’ll disgruntledly walk on by with their cash still in their pocket.

This is where the crux of the strategy comes into play in Rip Them Off. When the player presses play, Dupes will enter the map from their pre-determined entry points and travel along the roads before exiting the map. The player’s job is to place shops on their routes so that the shopper will enter and spend their money. There’s 9 types of shop you can place, each of which have their own cost and statistics like capacity and amount of time for a Dupe to exit. More expensive might not mean most effective in some instances and it’s the players job to determine which shop placement will reap the most benefits. Placing a shop that takes a hefty chunk of change out of your shoppers but has a small capacity and long shopper time might not be the best for high traffic routes. Similarly, putting shops that have a quick turnaround but small profit extraction from your shoppers on roads that don’t have a massive amount of traffic will result in underutilisation and lower profits.

Each map in Rip Them Off has several profit margin challenges to take on. The easier tasks last just a few days but later tests can last almost a fortnight. The longer a challenge is, the more challenging it is. As Dupes spend, that money goes straight into your pocket so that you can better rip them off. Shops obviously cost money and in the early stages of each map, you might not be able to place a store in each available slot. The saying goes that “you’ve got to speculate to accumulate” and that’s true of this game – as you buy more stores and place them along the routes, you’ll earn more money so long as you’re choosing your shops wisely. Each store type can be upgraded to increase their capacity and you’ll need to do so because as each new day arrives, so do more shoppers.

After each day of retail therapy has ended, you’re able to take a look at how well each shop did. You can see which shop earned the most, how utilised a shop was as a percentage and how many frustrated shoppers passed a store because they’d already been into one of the same stores or they couldn’t enter because it was at capacity. It’s here you’ll be able to see if your current strategy is working or if you’ve made a financial faux pas.

This is the first stumbling block for Rip Them Off. You’re only really made aware of your mistakes after the fact. When you’ve pressed play on a day, the screen can get so busy that it’s hard to really determine if something’s going wrong and if it is, where the wheels are falling off. The game can be played at 3 speeds and even at the slowest pace, it can be tricky to see where shoppers are getting frustrated because they can’t get into a shop. This is partly because many of the final shops that a Dupe will head towards are on the edge of a map and the shopper will only be visible for a short time before disappearing. There’s no way to pause the action (and by clicking the pause button, a menu completely covers the screen) to take in what’s going on. Instead, you’ve usually found the issue when it’s already too late.

You can even have a hard time after a day has ended in determining why you’re not making the profits you’re aiming for – this is usually when a store has a capacity far less than 100% but has a large number of frustrated shoppers who couldn’t enter because it was over capacity. This happens when a wave of shoppers all arrive at the same time and that number is higher than the capacity of the store. This could be because of an upstream impact or simply having the wrong store type in place. Thus begins a guessing game as you try to follow the flow of people on a screen that’s often as busy as a bee hive while trying to figure out if you just need to increase capacity at a store or change the store type (and whether doing so will throw off the dynamics and flow further down the line).

There’s 2 ways to play Rip Them Off then. A). Meticulously follow each stream of Dupes along to their destinations, calculating how each store will slow down the crowds and where you’ll get bottlenecks or b). Trial and error. Either way, this game can start to get a little tedious in any difficulty higher than the initial trial on each map. I’ve lost count of the number of times I’ve failed to reach an objective by 1% and each time, it means retrying a number of days to see where I went wrong. If Rip Them Off had colour coordination for the Dupes so the player knew where they had come from or you could see the route they were going to take before starting each day, I imagine this game would be far more enjoyable in the long run.

That’s not to say Rip Them Off is not worthy of any of your time. The first level of each of the 9 maps is just the right amount of challenging, as are a handful of later ones. There’s a few hours of fun here and the minimalistic art style and Mad Man-esque soundtrack give them a chilled out vibe. The control scheme is easy to use too, despite its obvious double duty as a mobile phone user interface.

Rip Them Off is a niche game made by a small team. The 1970’s thematic elements and corporate jargon carries a solid core concept for a time but it needed to be more accommodating to the player during its more challenging moments as the game can degenerate into tedious trial and error very quickly.

Rip Them Off is available now on PC (review platform) and iOS devices.