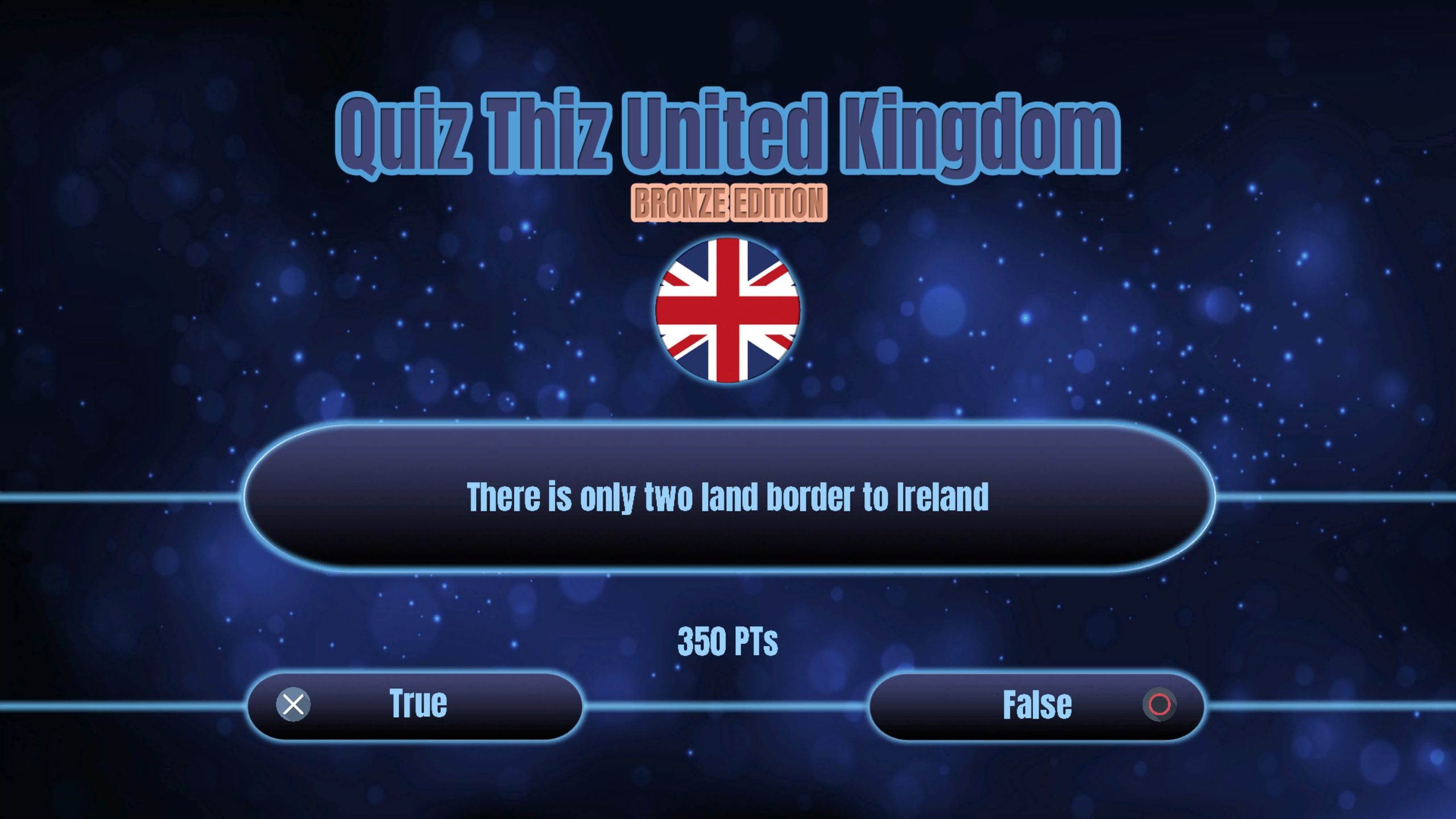 Trophy bait comes in a myriad of forms on the PlayStation store these days. Despite apparent attempts by Sony to stop this, asset flips, rehashed and barely altered clickers and “moving food” flood the store each week. One particular brand of trophy bait I hadn’t yet stumbled across personally was the cheap, shallow quiz game. After playing Quiz This United Kingdom: Bronze Edition, it’s yet another brand of game I’d advise everyone avoid on the PSN Store.

Let me set the scene: It’s coming up to Christmas and I thought I’d look for a new quiz game to play with the family. We’ve had fun with the likes of Are You Smarter Than a 5th Grader, It’s Quiz Time and Papa’s Quiz in the past, but wanted a new title. Quiz This United Kingdom: Bronze Edition certainly fit the bill based on the store description. “Are you the new quiz master and can you beat your friends on this quiz? Answer questions about this country and collect valuable points! Also, learn new facts about this country while playing!”. Instead, this game turned out to be atrocious.

Quiz This United Kingdom has just one game play mode. That intimation towards some kind of multiplayer in the store description? Complete crap. Instead, you’ve got this one mode that’s about as interesting as a Tory Party Conference.

Statements appear on screen, each of which is related to the United Kingdom. You’ve got a true and a false button on screen and the aim is to press the correct answer. That’s it. There’s no target, no rounds, no host to the quiz, no other type of question. All this game is is a list of details lifted from Wikipedia mixed in with some red herrings. These questions flit between painfully simple to randomly obscure with no difficulty progression. Here’s a sample of the statements, taken from the game verbatim, poor prose included;

That last question just trails off there. It just ends with “until”. Obviously, Queen Elizabeth II passed away in 2022, but the game can’t even be arsed to acknowledge that. There’s a few questions in the game that are like this.

As you can see from the selection above, the sentence structure is often very poor. The only time the sentences are clear is when they’re very obviously just copied from a website. On occasion, it’s tricky to determine whether an answer should be true or false because the statement is so crudely put together. You’ve always got a 50/50 chance of getting right of course.

There’s only about 50 questions in total in Quiz This United Kingdom too. These questions cycle around at random, so you only have to play the game for a few minutes before you’ll start to see repeated questions.

As you’re answering these questions – rightly or wrongly because you’ll get rewarded either way – reems of trophies will unlock. If you really wanted to, you could rapidly press X or O without reading any of the questions to unlock a Platinum trophy in just a few seconds. There’s no fun in that though, a theme for the entirety of Quiz This United Kingdom.

When you choose the correct answer from true or false, a score total goes up. There’s no purpose for this other than in relation to the trophies. There’s no leader boards or goals. There’s no way to challenge others. It’s a number that simply goes up without any motivating factor to make you want to see these digits increase. Quit out of a game and the score simply resets to zero. The game doesn’t even store a high score.

For whom the bell tolls…

The best aspect of Quiz This United Kingdom? The music. While it does eventually grate because it’s on repeat, the developers have chosen some pretty decent stock music here. There’s the ticking of a clock and bells, likely to represent Big Ben and there’s some drumming, a lot like you’d hear in a royal procession.

The rest of Quiz This United Kingdom? Trash. It’s feature-less, poorly put together and might as well be an interactive listicle article on facts about Britain. It’s not entertaining in the slightest. If you’re looking for a quiz game rather than a cheap platinum trophy look elsewhere. And you might as well avoid the Silver and Gold versions of this game too – they’re identical to this. Same questions, same music, same mode, everything. I guess Sony’s threats about shovel ware have landed on deaf ears…

When the best thing I can say about this game is that the stock music that was chosen is at least thematically appropriate, you know the rest of the game was bad. A desperately poor title, Quiz This United Kingdom: Bronze Edition is the bottom of the barrel in terms of quiz games and is yet more trophy-bait shovel ware infesting the PlayStation store.