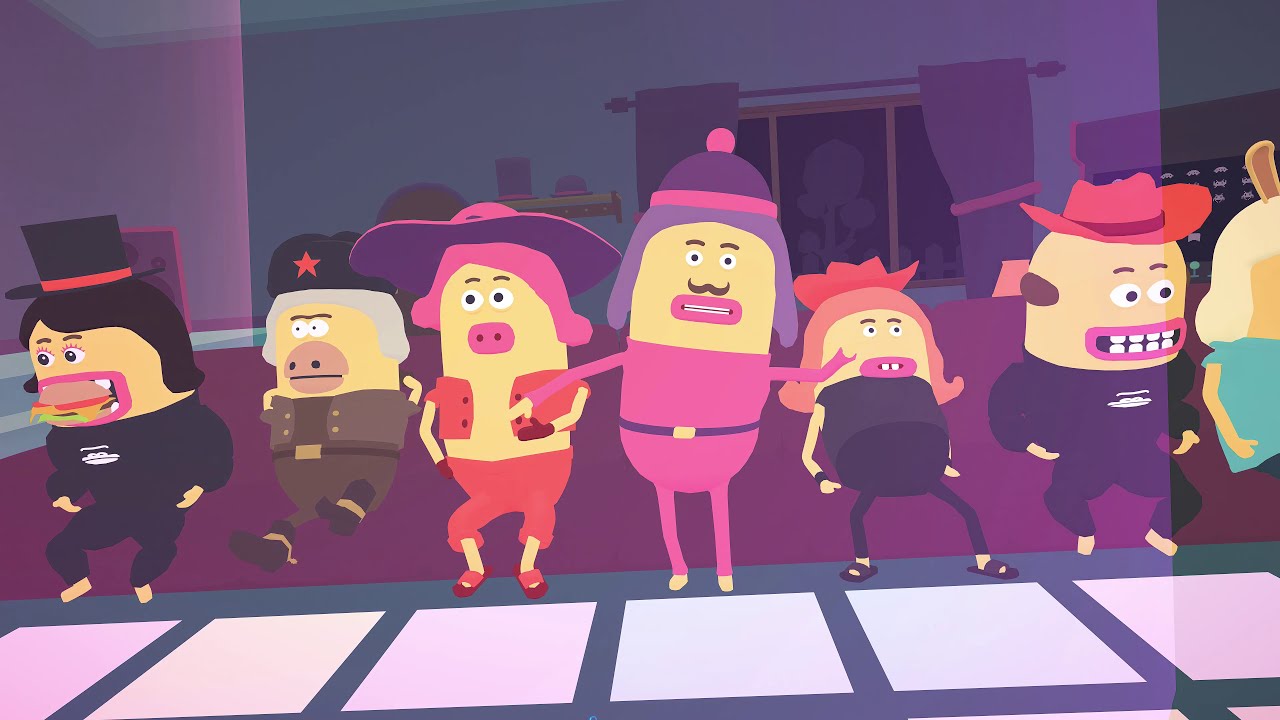 The Jackbox games have been the pinnacle of party games for years now. A focus on unique hooks, quirky comedy and accessibility mean that almost anyone can play these games and have a good time doing so. Many of the aspects that this party series pioneered have been adapted elsewhere, primarily the ability to use mobile phones as an input device rather than a controller or keyboard. The likes of Uno, Wordhunters, Erica and all of the Sony Playlink titles have adapted the smart phone control method. If there was one complaint you could make about the Jackbox games though, it would be that not many of the titles are tailored to younger gamers. This is where Papa’s Quiz comes in.

A trivia party game from developer Old Apes that utilises phones/tablets as an input method (just like Jackbox), Papa’s Quiz is a family friendly title that accommodates the junior player – but is maybe a little too simplistic for its own good.

Papa’s Quiz can be played alone or with 2-8 player multiplayer. At the start of each game, you’re presented with a room code on the screen. Using a mobile phone or tablet, each player can join the game by visiting papas.tv and entering the code to join the lobby. Once you’re in, you can then design your avatar. Like the estranged, extended family of Mr Chips from Catchphrase, you can tailor your yellow cylindrical character with an impressively large set of cosmetic options. Bikinis, pink hair, hot dog costumes, swirly eyes, toothy grins and toothless smiles are just a small selection on offer.

You also get to choose a first and last name for your Papa’s Quiz contestant which are obviously designed for maximum comedic effect. Each option – both a title and surname – are fully vocalised by the titular host as you select them. There’s some silly fun to be had with the deadpan delivery as Papa reads out “Fat Cow”, “Papa Finger”, “Strange Muesli” and “Magic Dog” among many others. Once everyone is happy with their avatar and name, it’s on to the actual quizzing.

Each game of Papa’s Quiz is broken down into 5 rounds. The first 4 rounds award points based on accuracy and speed of answer. These points translate into time for the 5th which is the deciding final round that crowns a winner. This means that even if you’re in last place according the points balance coming into the final round, you can still come out triumphant with a fast finger and a faster brain – a smart design decision to keep people interested. The round types appear in exactly the same order each time you play the game with no deviation.

The first round is a straight up trivia round. A series of questions are asked and 4 answers are presented on screen alongside 4 coloured circles for each question. These circles are presented on each players mobile/tablet and you’ve simply got to click the right circle for the corresponding answer as quickly as possible. Get the question wrong and you win no points. Everyone who gets the question right will win at least some points, the fastest respondent picking up the most and decreasing for each subsequent player who was slower.

The second round is a picture round. An image is hidden behind a grid which falls away over time revealing what’s below. Again, 4 answers are presented on the screen and you’ve simply got to identify what is being unveiled on screen and click the corresponding circle on the phone/tablet. Points are awarded in the same way – fastest correct answer gets the biggest haul and every other correct answer gets progressively less.

Round three is slightly different. It’s once again a trivia round but the person who gets the correct answer the quickest gets to steal points from another player (or themselves, if they’re feeling generous/playing with children and don’t fancy dealing with a temper tantrum). This round can lead to some fun moments after a question is answered; each player is lined up on a couch and an arrow heads back and forth along the potential targets of the points theft. Cue moments of tension as the arrow hangs over your head hoping the buzzer on the question winners phone doesn’t get pressed.

The penultimate round is another picture round but with a difference. A series of slides are shown on screen and you’ve got to press the buzzer on the phone/tablet when an image is shown which fits the description on screen. These images could be different breeds of dog and you’ve got to hit that buzzer when you see a German Shepherd, for example. This isn’t the most well thought out quiz round however. Whenever anyone taps their buzzer, the game chimes. If you’ve got absolutely no idea what the answer is, you could simply wait until everyone else presses. You’ll either get the right answer and score some points or everyone got the wrong answer so no one got an advantage.

All of the points collected in the first 4 rounds dictate how much time you have to answer questions in the fifth and final round of Papa’s Quiz. Here, each avatar is stationed on top of a pillar. The more points you’ve earned, the taller the pillar. Random trivia questions are then presented on screen and the pillars start to fall, stopping once you’ve chosen an answer. Get the question wrong and the pillar will fall further. Every person who gets the answer correct gets a little boost to their pillar height. The winner – of this round and the whole tamale – is the player whose pillar is the last to shrink into the floor. Answer questions quickly and correctly and you’ll come out on top.

Papa’s Quiz has 185 different question topics that contain a combined 3000+ questions. The game has a pretty quirky and fun way to decide which topic will be selected for rounds 1 through 4 too. A single cursor appears at the centre of a screen spit into 4 quadrants, each of which corresponds to a topic. Every player can tap the 4 directional buttons on their phone/tablet to move this cursor and duke it out to try and select the topic that they’d prefer (or a topic you know your opponents know absolutely nothing about). It’s an amusing little addition to the topic selection.

These topics come in an impressively wide variety of subjects like sweet fruits, famous buildings, uniform types, YouTubers, Fortnite facts, history, animals and 148 more. There’s ‘Junior’ topics too which pitch questions with a younger player in mind. The quality and difficulty of these topics vary wildly (and this is not a slight on my lack you YouTuber knowledge – yes, I did get utterly owned by my kids on this topic). Some topics contain exclusively simple questions and others have some truly obscure sources.

It’s just a shame that these questions feel like they are read from a trivia book without any kind of flair. The reason the “You Don’t Know Jack” quiz games are so lorded, aside from the steep challenge they pose, is the personality that shines through. The hosts of Papa’s Quiz, Papa and a robot called Monty, are both fully voiced – but certainly not by human voice actors. Those text to voice software packages? Yeah, they’re both presented by one of those with different accents. This gives the vocals in the game this really flat, dispassionate yet droll delivery. There was an audible groan from my entire family after Papa said “Stop Stop Stop, Monty” for the 10th time with all the enthusiasm of an Endoscopy waiting room. Some words haven’t been corrected and are pronounced incorrectly too. I genuinely did a spit-take when Monty pronounced Seinfeld incorrectly 3 times in quick succession.

There’s a lack of innovation here too. Papa’s Quiz doesn’t bring anything new to the quiz genre. The only aspect of it that stands out from the slew of other gameshow-esque quiz games out there like It’s Quiz Time and Knowledge Is Power is that after every round, one participant gets to choose to do a dance. Some of these boogies look suspiciously like some of the emotes in Fortnite, so my kids got a kick out of it at least.

A competent, accessible, family friendly yet unusually dry quiz game, Papa’s Quiz offers up a few hours of party fun before the whole thing becomes stale. It won’t be challenging Jackbox for the party game crown but would fit right into a playlist of party games with friends and relatives.

Papa’s Quiz is available now on Xbox One (review platform), PS4 and PC.