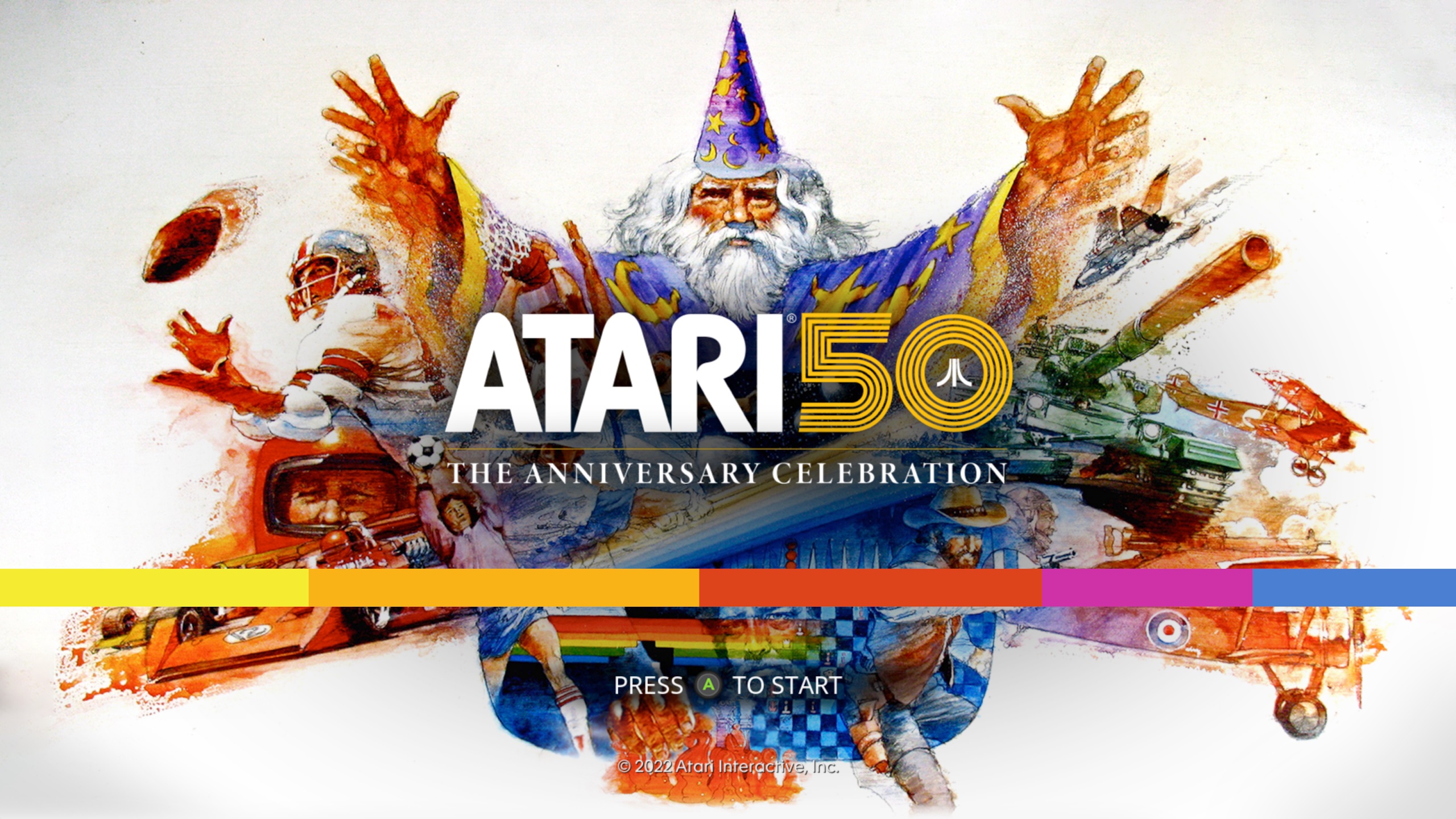 Can Atari 50: The Anniversary Celebration remind us of the good times instead of the bad? The Finger Guns review...

The year was 1982 and my dad brought home this mysterious box – black plastic, wood panelling and anodised metal switches. I’d never seen anything like it. He plugged in these weird small boxes with fiddly sticks protruding from them and a small red button in the top left corner. He then handed me one, slotted in something that looked like an 8-track tape with a picture of a cowboy on the front and pushed one of those anodised metal switches. Within seconds, we were playing a game called Outlaw on an Atari VCS and my life would never be the same again. That was my own personal Atari story – and now anyone with similar stories can properly revisit them with Atari 50: The Anniversary Celebration, Digital Eclipse’s outstanding ode to gaming’s first ever superpower.

Yes, I’ve shown my hand early with this one, but you have to understand – companies have been revisiting, repackaging and, in some cases, straight-up rebooting (would I go as far as to say ‘exploiting’?) Atari’s history for 25+ years at this point with incredibly mixed results. There are no such misgivings here – Atari 50: The Anniversary Celebration is gaming history done right.

Presented initially in a chronological order, Atari 50: The Anniversary Celebration allows you to play pretty much the entirety of Atari’s first-party back catalogue. From arcade Pong to Atari Karts on the ill-fated Jaguar, it’s all here, for better or worse. Not every game is a winner, of course, and there’s stuff on here that you’ll play once for the sake of completion and never want to touch again.

However, the biggest takeaway from playing through some of Atari’s early output is the reminder of just how influential much of what they released was. Does something like Windjammers exist without Pong? By extension, does something like Lethal League exist without Warlords? It can be pretty easy to be dismissive of retro gaming – particularly the titles that came out pre-NES – but if you can’t see the influence of games like 1980’s Adventure or the Swordquest series, then I don’t know what to tell you. You’re probably reading the wrong review.

Speaking of Swordquest, this points to another excellent feature of this compilation – the inclusion of unreleased titles. In Swordquest’s example, this means the completion and inclusion of Swordquest: Airworld, the fourth game in the series which was cancelled following the video game crash of 1983. Elsewhere, you can play previously unreleased titles like the arcade game Maze Invaders or Saboteur – the last 2600 game designed by legendary Yar’s Revenge developer, Howard Scott Warshaw. You can, of course, understand why some of these games went unreleased when you play them, but it’s incredibly interesting to experience nonetheless.

Of course, there have been plenty of ways – legal or otherwise – to play the vast majority of Atari’s arcade and 2600 content for decades at this point. That’s why, for me, the real value of Atari 50 comes from the stuff that hasn’t been commonly available before – namely the Atari computer, Jaguar and Lynx content.

I had a brief dalliance with an Atari 800XL computer in the late 1980s, but I played about three games on it, and my experience with the Jaguar and the Lynx is non-existent, so it was very cool to jump in and mess around with some of the the games I never got (or frankly wanted) to play in the early-to-mid 1990s.

And, honestly, there’s some good stuff in there – admittedly, there’s not a huge selection of computer and Lynx games, but what’s there has been chosen well. The Jaguar is, of course, the console that effectively spelled the end of Atari as a major platform holder, so I was somewhat surprised at how much I enjoyed a few of the titles on offer here, with Tempest 2000 being the standout title and surely the best game ever released on the console.

Some of the coolest content in this package actually comes from Digital Eclipse themselves with the reimagining of some of Atari’s best-known titles. In addition to the aforementioned Airworld, there are a further five titles to play. Most stick relatively closely to their subject matter, but VCTR-SCTR breaks from the pack as a result of a terrific visual style, banging soundtrack and successful marriage of gameplay styles, borrowing from the likes of Lunar Lander, Tempest and Asteroids. If you play one of these, then this is the one to play.

Raiders of the Lost Archive

But, in some ways, the real prize content of Atari 50: The Anniversary Celebration isn’t even the games themselves. It’s the hours of video content, comprising archive television footage and interviews with ex-Atari staff. It is truly fascinating stuff – from black-and-white footage of founder Nolan Bushnell in the pre-Atari days to modern-day recollections from the likes of David Crane on how many drugs were consumed in the Atari offices in the 1970s.

And it hasn’t even been sugarcoated – from the departure of Al Alcorn (the creator of Pong) over Warner refusing to release his cartridge-based holographic console to discussions on why the Jaguar became such a spectacular failure, some incredibly honest conversations have been captured here.

An outstanding package in its own right and the new standard by which all future retro compilations should be measured, Atari 50: The Anniversary Celebration serves as a love letter to a bygone era, a reminder of the power the name once held and a tantalising glimpse at how some of gaming’s most storied franchises can be revitalised in the right hands. Highly recommended for anyone remotely interested in gaming history. A particular affinity for Atari? Utterly essential.

Make sure to follow Finger Guns on our social channels. Twitter, Facebook, Twitch, Spotify or Apple Podcasts – to keep up to date on our news, reviews and features

The Finger Guns Podcast Ep. 87 - No Cyberpunk Reviews?
A Little Golf Journey Review (Switch) - Tee-rific
19 Indie Games To Get Excited About In July 2022