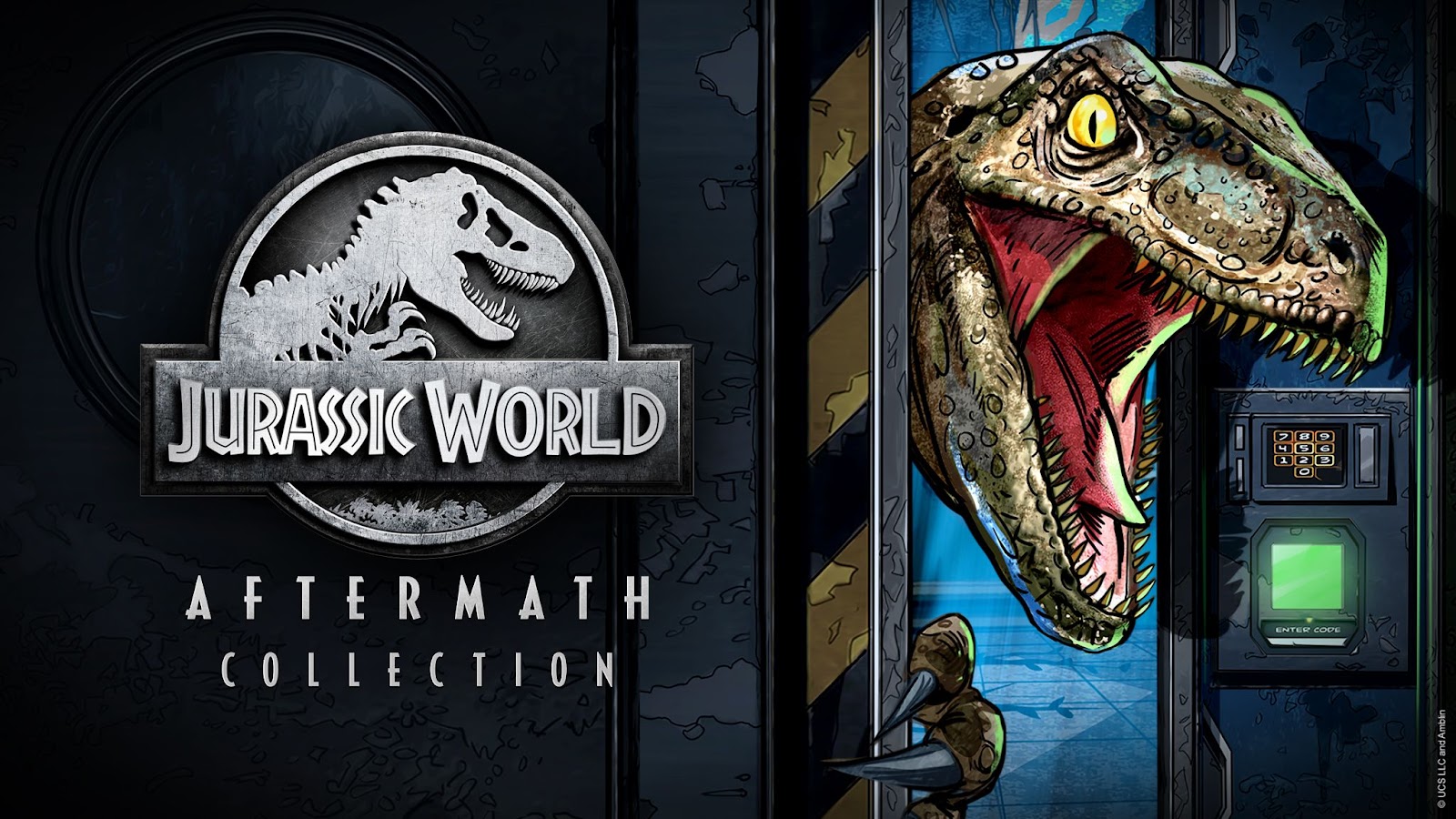 Stealth-Puzzler Jurassic World Aftermath Collection escapes VR and onto the Switch, but should it have stayed enclosed? The Finger Guns review.

What if I told you that Jurassic World Aftermath Collection was essentially a first person playable version of the infamous kitchen scene from the first movie drawn out into an entire game? If you’re like me, you’d be as equally panicked and intrigued by that prospect. Outside of the iconic first encounter of the T-Rex in Jurassic Park, the kitchen scene is undoubtedly the most memorable to me. So yes, when I saw the trailer it instantly harkened back to that scene, whilst also looking like a cel-shaded Alien: Isolation. A winning 1-2 combo for a knockout, right? Right?…

The game was developed by Coatsink initially for the Oculus Quest (and Quest 2). Thankfully the Switch release comes as a full package of Part 1 and 2 seamlessly connecting them. So, you won’t be pulling your hair out waiting a year for it to conclude. Comparing it to Alien: Isolation is a perfect summary. Instead of a Xenomporh, you have Velociraptors mercilessly pursuing you. This combines with a total lack of combat, so stealth and distraction are your best friends.

Jurassic World Aftermath takes place after the events of Jurassic World and before Fallen Kingdom. You play as Sam who’s joined by Dr. Amelia Everett. You’re initially tasked to infiltrate the lab facilities on Isla Nublar – the setting for Jurassic World – and recover important documents. Things go south instantly, thanks to some pesky Pterodactyls making your helicopter crash, but the mission is still the same. Find those documents and somehow escape.

Sam is silent but you do have Laura Bailey’s Dr. Amelia Everett in your ear throughout. She plays the part emotively, ranged and engaging during the moment to moment gameplay. We do also have Jeff Goldblum and BD Wong reprising their roles; though neither of their stories play a huge part in Aftermath. This game definitely adds depth to BD Wong’s Dr. Henry Wu, fleshing out more of his personality than maybe the movies do.

It gives Blue the Velociraptor somewhat of an origin story that’s tied to the characters within the game too. However, this is mostly about Amelia and as a self-contained story it works decently to fill the gaps that may satiate Jurassic World fans, if you can get through the gameplay.

The fact that Aftermath was split into two parts is most evident in the gameplay. You’ll be spending the majority of the game sneaking around past the roaming Velociraptors across the facilities you enter. A lot of the objectives are going from point A to point B and accessing computers to get them working for one reason or another. These are locked by a few puzzles like a Simon Says or tapping at the right frequency. They do get more interesting in Part 2 with more unique puzzles but it’s a lot of the same whilst you evade the dinosaurs.

You’re also equipped with a tool that can create audio distractions from electricals, though I rarely found myself using it. I could have been missing a trick and making it easier on myself but I didn’t find the need to use it for almost all of the game. To compensate for the lack of mobility to its VR counterpart is the ability to lean left or right with ZL or ZR, but again whilst appreciated I didn’t use it too often.

You have a stamina meter for sprint and a charge meter for when you can use your distraction tools, but I’ve not found either to be that helpful. I think the attempt to it out translate this into a flat screen experience from VR hasn’t worked all that successfully. That’s because the player urgency and participance has been restricted to a button press that mostly does it for you. When the play is more demanding and involved, it can feel finicky and unresponsive at times.

God Help Us, We’re in the Hands of Engineers.

The stealth may make or break your enjoyment of Jurassic World Aftermath Collection. For myself, I found the Velociraptor’s AI absolutely frustrating. It feels lost in translation from VR to Switch. The spatial awareness of the dinosaurs whether docked or handheld felt non-existent. Often I found myself sprung on by the dinosaur in the stealth sections without notice. Coupled with the controls feeling a little clunky, I’d more often than not be met with a fail screen. When this is coupled with stale puzzles in Part 1, there’s no tension or fear, instead just boredom and frustration.

With that being said, if you persevere through Part 1 there’s an almost night and day difference with Part 2. In the second half the levels are more varied, with new dinosaurs and shorter gaps between the story beats. It’s a shame because I wish the whole game could’ve been more like this as it takes a good four hours to get there. Though the puzzles change up a little you’ll find yourself doing mostly the same thing across the 8-10 hours.

By Part 2 there was a few more e-mails to read but they weren’t too interesting. I would have liked some kind of collectible whether it be logs or trinkets visitors left behind to build more of the environment. Instead, the game plays a little to one-note and doesn’t mix things up until it’s too late to keep my interest.

The cel-shaded look is a no brainer when you think about wanting to cater to a wide age range. As well as that, instead of scrutinising the photo realism of the dinosaurs and picking at how good they look, you’re instead appreciating the style Coatsink have gone for. It’s a crisp, clean presentation that maybe could have done with some more atmospheric lighting to heighten the level of fear. The areas meld into one as they’re all sections of laboratories but it’s distinctly Jurassic World with the iconography and mis-en-scene.

The music of course has some of the masterpiece work from John Williams. However, when Vince Webb strays from the obvious music pieces from the film and goes into his own, the music shines. The foreboding orchestral sounds recreates the fearful wonderment of the Jurassic Park experience sonically. The string led melodies spark melancholy, enhancing the tone of the game.

Hold Onto Your Butts

The Switch isn’t the best place to play Jurassic World Aftermath as the flatscreen port takes away a lot of the mobility and ability to manhandle the puzzles. It feels slower and less interactive than its original Oculus release. Having said that, if you can’t play this on VR and you do have a hankering for more Jurassic World then this may be of interest to you. There aren’t huge revelations made in the game but it adds depth to the established film franchise that could be fun for fans.

A rough start that continues for hours may put some off, but if you love the Jurassic franchise then this could be for you. The stealth isn’t translated well from VR but it’s serviceable albeit one-note. However, the presentation and music compliment the franchises ethos exceptionally, making it a competent Jurassic experience.