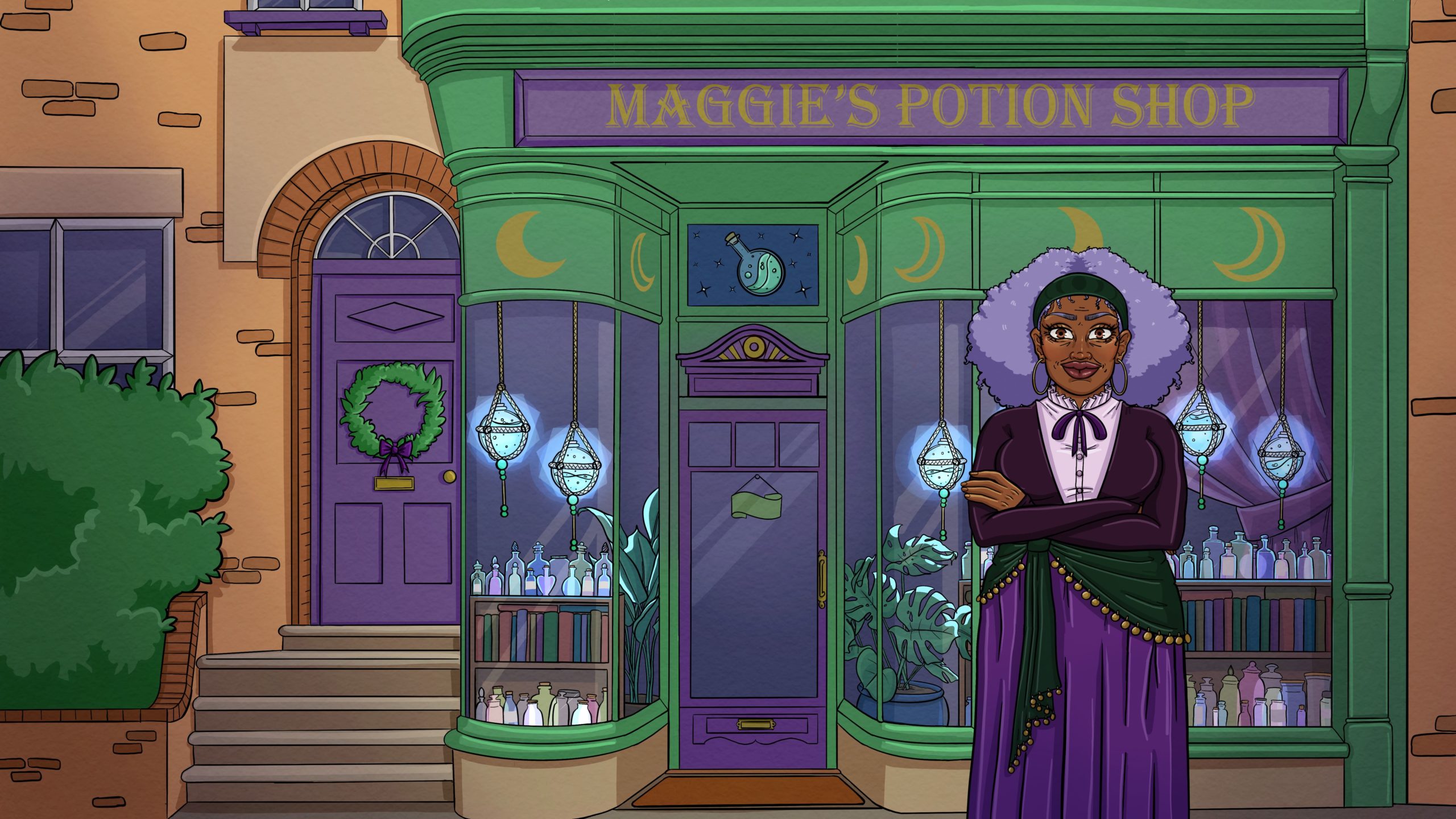 An inclusive, magical visual novel with optional romance, Spellbound: The Magic Within is an engaging title that's missing a few genre staples. The Finger Guns Review.

An inclusive, magical visual novel with optional romance, Spellbound: The Magic Within is an engaging title that’s missing a few genre staples. The Finger Guns Review.

Stop me if you’ve heard this one before: You’ve recently found out you have the ability to use magic. After accidentally using your magic to do unintended things, you’re aboard an steam train and on your way to a place in Britain full of witches, wizards and magicians. Here, you’ll be trained on how to harness your powers. There’s no denying that the initial set up to Spellbound: The Magic Within [Steam link] has a few things in common with a (previously) very popular wizard-y series. You know the one.

I’ll be honest, it was this that originally attracted me to Spellbound: The Magic Within when I played it at EGX 2021. For a non-insignificant portion of my life, I’d have classed myself as a ‘fan’ of Harry Potter. That changed a few years ago, as I know it has done for many others, because of the beliefs of its creator. When playing Spellbound on the show floor of EGX, it was instantly apparent that the opening window dressing to this visual novel has a number of parallels to the famous book series.

Where Spellbound: The Magic Within differs dramatically from Harry Potter is the wealth of diversity and representation on display. At the start of the game, you’re given the opportunity to create your avatar using a pretty impressive and varied customisation set. This includes pronouns (he/him, she/her, they/them), hair and skin colour, tattoos, clothes and accessories. No matter what type of character you want to make, whether it’s a version of your real self or something wild from your imagination, I think you’d be able to create it here. Unless you want to be a bald character. There’s no bald option as far as I could see. Not a deal breaker but I had to develop a much younger version of myself – one with hair – on my first play through.

The Wizards of Witcherley Place

The diversity of the cast in Spellbound: The Magic Within doesn’t stop with the player-character either. Once you’ve disembarked the train and arrived in the village of Witcherley, your new home while you explore your powers, you’ll meet a varied cast of characters, half of which are people of colour, several of which go by “they/them”. It’s a charming ensemble, each of which has a strong sense of personality that you’ll explore as you get to know them.

You’ll get the opportunity to get especially close to 4 of the main characters during your time in Witcherley. On your first day in the village, you’ll take a test which determines which school of magic you’re currently most attuned too. After answering some questions, you’ll get your results which will give you an indication of which school of magic to specialise in. You don’t have to take these results as written however. You can choose to be mentored by any of the 4 specialists – Ari, a master in divination, Melody, the book shop owner and talented transfiguration witch, Fern, a student in summoning and Theo, a nature loving abjuration specialist.

Spellbound: The Magic Within features a branching narrative which multiple different endings. The choice of which school of magic and thus, which mentor, is the most important choice you’ll make. Whichever tutor you choose will be your guide through this magical world and your companion against the dangers you might face. While the overarching narrative of Spellbound is the same no matter your choices, the journey along it will be tailored to the character you choose to as your tutor…

…and potential romantic partner too. While you’re unlocking your powers and learning about the magical world you’ve just been introduced to, you’ll invariably get close to your tutor. You get to choose whether that stays at a platonic level or grows deeper. This isn’t hoisted up on you and if you just wanted to play though this game for the Witches and Wizards in peril story, that’s absolutely possible.

The writing within Spellbound: The Magic Within is at its best when exploring these romantic entanglements however. The way the visual novel describes those small sparks of attraction, like touching each other’s hands, manages to evoke those feelings of young, blossoming love. The four characters you get to woo are all well thought out and have their own unique responses to these moments.

That quality of writing expands to much of the rest of the visual novel. I won’t spoil it here but the larger plot involves a mysterious conspiracy with wider implications on magic itself. There’s a plot twist of sorts but it’s really quite easy to predict. Personally, I’d have preferred if the motivations of the villain were explored a little more during the third act. Even considering these niggles though, the story in Spellbound: The Magic Within is engaging from start to finish.

That engagement is helped by a clean, evocative art style. Presented like a traditional first person visual novel (you’ll only ever see your player-character’s image in the dialogue box when they’re talking), characters will show up on screen when in dialogue with you in front of location art off in the background. The character designs are unique for the genre too; while anime styled designs dominate the visual novel landscape in general, the characters in Spellbound: The Magic Within have more of a 80’s cartoon vibe. It’s a welcome aesthetic that manages to complement the characters personality.

Working alongside the art style is a pleasant soundtrack. Complete with gentle acoustic guitar riffs and the occasional piano ditty, the music in Spellbound: The Magic Within has a generally chilled out vibe, like sitting in a stylish, off-the-beaten-track coffee shop. This music loops around and it might get a little repetitive in places as the music doesn’t change for long periods. Still, there’s the option to turn it off if you want.

In terms of options, this is one of the weaker aspects of Spellbound: The Magic Within. Most modern visual novels come with a few quality of life measures like the ability to skip content you’ve seen before or to speed up or auto-play progress through the game. This makes it more likely for players to explore narrative paths and endings they’ve not see before. Those measures do not appear to be in Spellbound. This does mean that if you want to view all of the endings and explore everything this game has to offer, you’ll have to sit tapping the space bar on repeat to speed through content you’ve already seen before. There’s no auto-play option either, a mode that only stops progress to enable players to make decisions. Hopefully these types of options are included in future updates.

Even without these quality of life updates, I’m now on my third play through of Spellbound: The Magic Within. While the repetition has started to grate, I’m still consistently impressed with the world that developer Wyrdren Games has created. That initially familiar Harry Potter-esque set up makes way for an original take on Witches and Wizards that’s thoroughly engrossing. What’s more, the representation on display feels natural and no matter what character you make in the creation suite, they slide naturally into this world and cast. If, like me, you’re looking for a coming-of-mage story that you can feel proud to support, this will be right up your alley.

A coming-of-(m)age story with optional romance and multiple endings, Spellbound: The Magic Within is a diverse and inclusive visual novel that’s engaging from start to finish. It’s lacking some quality of life tools which can make replaying it tedious but it’s still an entertaining alternative to the big wizarding worlds and a pleasant way to spend an afternoon.

Spellbound: The Magic Within is launching on PC via Steam on September 2nd, 2022.