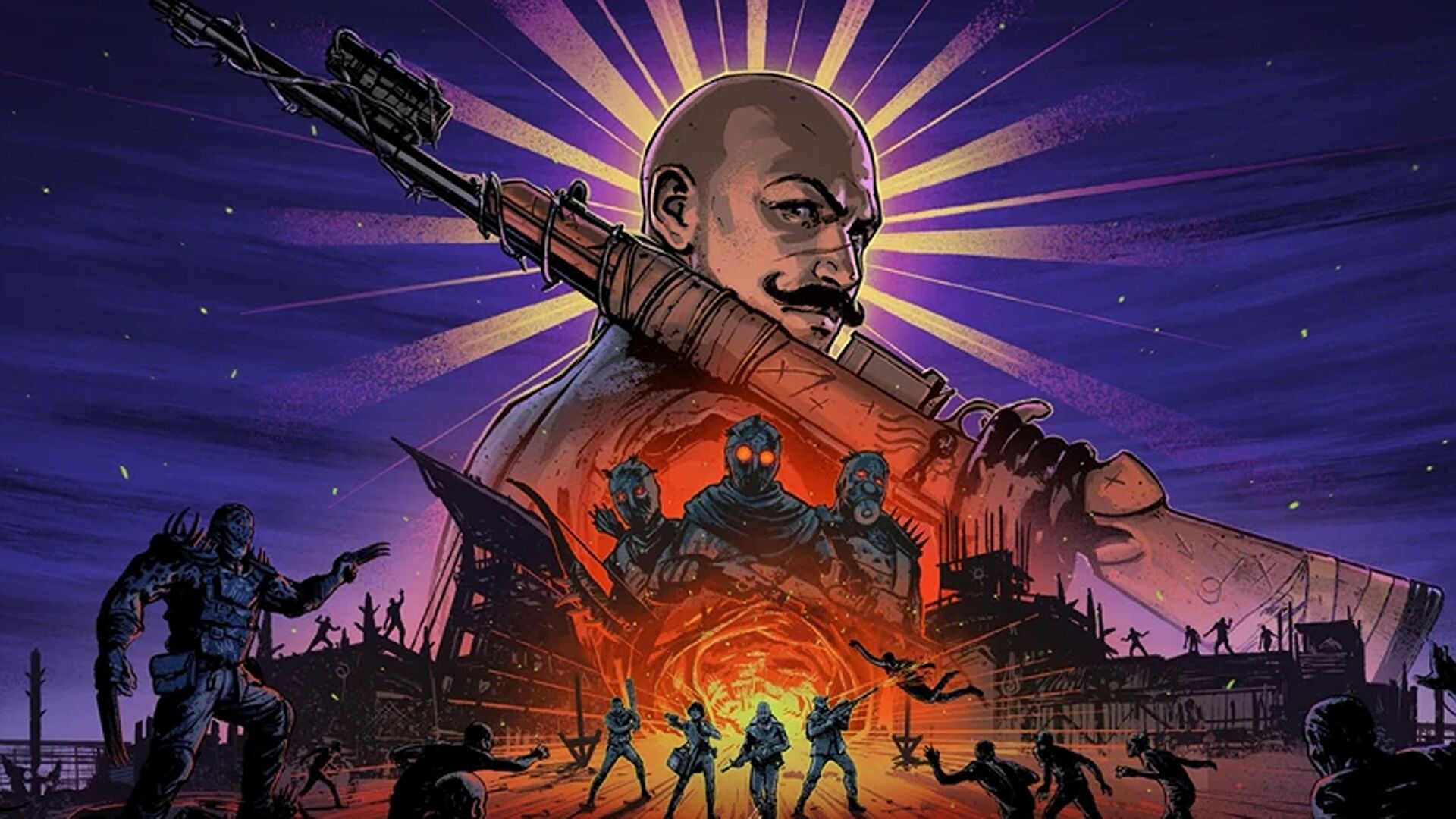 Expansion 2: Children of the Worm offers desperately needed new content, so can it entice you back? The Finger Guns Review:

Back 4 Blood was back once, and now, it’s back again. Just like the T-1000 made famous by an Austrian hulk, it never quite knows when it’s beaten and when to give up. The first expansion: Tunnels of Terror, was released in April and it’s fair to say I and the team weren’t particular fans of Turtle Rock Studios’ first offering. Far from encouraging us to get stuck back into the blood and the grime of blasting Ridden to bits, we were left disappointed and ultimately bored by its meagre rogue-lite content.

But alas, if second first-impressions were all good entertainment were based off of, we probably wouldn’t have ever received Thor: Ragnarok, and what a comedic tragedy that would have been. Which brings us to Back 4 Blood’s second expansion: Children of the Worm.

Retailing at £11.99 as a standalone piece of DLC, it’s comprised of a whole new campaign act, a new playable Cleaner and a host of novel weapons, skins, cards and other tidbits. With hope in our hearts and naive optimism still coursing strong through myself, Kat and Rossko, we dove in with cautious abandon. Did it reignite the spark long since burnt out? Or does it get swooped up in the morning dew to be devoured by maggots? Let’s find out, shall we?

First things first. If you’re here because Back 4 Blood’s narrative chops blew you away and demonstrated the true heights of video game storytelling in the original release, I’d firstly question if you’re okay and secondly, are you sure you’re okay? The story is a nothing in this game and this expansion is no different. A weird Irish bloke turns up at Fort Hope with a sliced eye, declaring himself Prophet Dan and proceeds to talk some nonsense which sends your team out to kill some new Ridden and infected survivors. That’s your lot, don’t expect anything else.

The new story act is comprised of 6 wholly fresh levels, taking you to the wondrous sights of a prison block and a makeshift tower camp of the new infected types. While the new locations aren’t especially riveting, they’re a welcome addition and the claustrophobic nature of prison architecture in particular lends itself well to Back 4 Blood’s particular brand of chaotic action.

Barreling our way through the missions in just under 2 hours, I’d say we had a decently fun time with it. For the first 3 levels especially, the new environments and challenges presented gave us a good sense of enjoyment. So much so in fact, we even exclaimed “are we… actually enjoying Back 4 Blood?!”. It’s a step in the right direction, no doubt. Rossko particularly liked the new Prophet Dan, mainly due to his ragged voice lines and cool ability to grant a random buff whenever one of the party was downed (would you believe that happens a lot?).

Having said that, the last couple of levels fall into some typical tropes of the original release that make them uninteresting, undoing some of the goodwill earned up to that point. The last mission is especially disappointing, offering a short, unengaging run around to conclude what could have been a good piece of DLC. A couple of moments like falling through a trapdoor into an arena fall of Ridden shone nicely and caused a terrified shout of “OH… SHIT!” which was great, but taken as a whole the campaign is filled with the usual fetch quest design and bland objectives that have been the norm for this title.

So, what about those pesky Ridden types then? The variations introduced in Tunnels of Terror were, to say the least, bloody disappointing. Thankfully, Turtle Rock have delved a bit more into the creative juices for expansion 2. In come the Slashers, hulking beasts with Wolverine claws, the Crones, who speak like witches and shoot arrows at you, Pusflingers, who just… throw green juice at you… apparently, and would you believe it: Snipers. Yep, you read that right, Ridden Snipers. We’ve seen it all, folks.

I appreciate I’m being a bit of an arse about it with how I’m writing this, but in earnest, they’re actually solid additions. They won’t be breaking any zombie game staples going forward, but they encourage some different approaches to encounters. Snipers especially cause you to take a moment before venturing into the next kill zone, while Puslingers can be a real hindrance when you’re fending off your 5th horde trying to move a cart along.

They’re better than expansion 1’s offering at the very least, though admittedly that’s not a terribly high bar. Children of the Worm also introduces some new gameplay wrinkles like bear traps that’ll snare you placed positively freaking everywhere. Seriously, even on top of cars… who does that? On my second run through I absolutely despised them as they break up the pace artificially and while yes, they’re there to keep you alert, they’re also f***ing annoying as s***.

To counter this, there’s some new weapons on offer like your very own Wolverine claws (which myself and Rossko had far too much fun charging into mobs with and decapitating dozens of Ridden at a time) or a rapid-fire bow. Additionally, a smoke grenade has been added and you can find consumable foods that offer buffs, alongside purchasable armour points. Duffel bags are placed in each level and securing them to the end of a level grants a reward like a weapon skin.

None of it’s groundbreaking and in truth I never even found a bow in the actual campaign despite playing through it twice. Consumable foods are the barest of minimum additions, but then the Wolverine claws have you tearing up a horde like a blood-starved beast straight out of Bloodborne. It’s a compromise, I guess.

If Children of the Worm is a starting point for the third expansion, then I’m cautiously optimistic. This second piece of DLC doesn’t set the Ridden-infested world alight, nor does it totally fix the core issues inherent with Back 4 Blood’s design. What it does do however, is offer some fun little additions and small quality improvements inside a fresh batch of content.

This is what the first expansion should have been, but to its credit, the Ridden Hives are integrated well with both the core game and this new DLC, which shows some nice cohesion growing in its content offerings. I ran through the new levels twice – once with my fellow Finger Gunners (and potentially a Turtle Rock dev who was very, very supportive and patient with our abysmal performance), and once solo with the bots.

By the end of my second playthrough the cracks in the core design and old fatigue from the mission structure kicked in once again, but I have to say, the game is in a vastly improved state from when it originally released. Solo play is viable thanks to huge bot improvements, card meta has been adjusted nicely, corruption cards offer substantial challenge and the difficulty curve has been smoothed out significantly. It’s absolutely, definitively, positively, not perfect. But you have to commend Turtle Rock for the effort, time and energy they’ve given to make Back 4 Blood as good as it can be, which I genuinely appreciate.

For £11.99 you’re getting a 1 to 2 hour campaign, a new character, some new wrinkles of gameplay mechanics and a few weapons or skins. Whether that price is worth the content will be subjective to whether you plan to run this multiple times on different difficulties and love synergising your builds with buddies, or whether you’re a one-and-done kind of person. For the latter, Children of the Worm isn’t worth getting up for early. For the former, well, you’re probably already in there ripping up Ridden cosplaying as Wolverine, aren’t you?

Back 4 Blood’s second expansion Children of the Worm delivers some urgently needed fresh content with a new campaign, character and weapons. It relies on the stale objective design and flawed gameplay of its base, but it also offers some fun missions and new enemy types to overcome. It’s a step in the right direction for Turtle Rock Studios and Back 4 Blood, most importantly leaving me optimistic for the planned third expansion, instead of with an intrepid fear of mediocrity that followed Tunnels of Terror.

Back 4 Blood – Expansion 2: Children of the Worm Review is available now on PlayStation 5 (review platform), Xbox One, PlayStation 4, Xbox Series X and Series S, and PC.