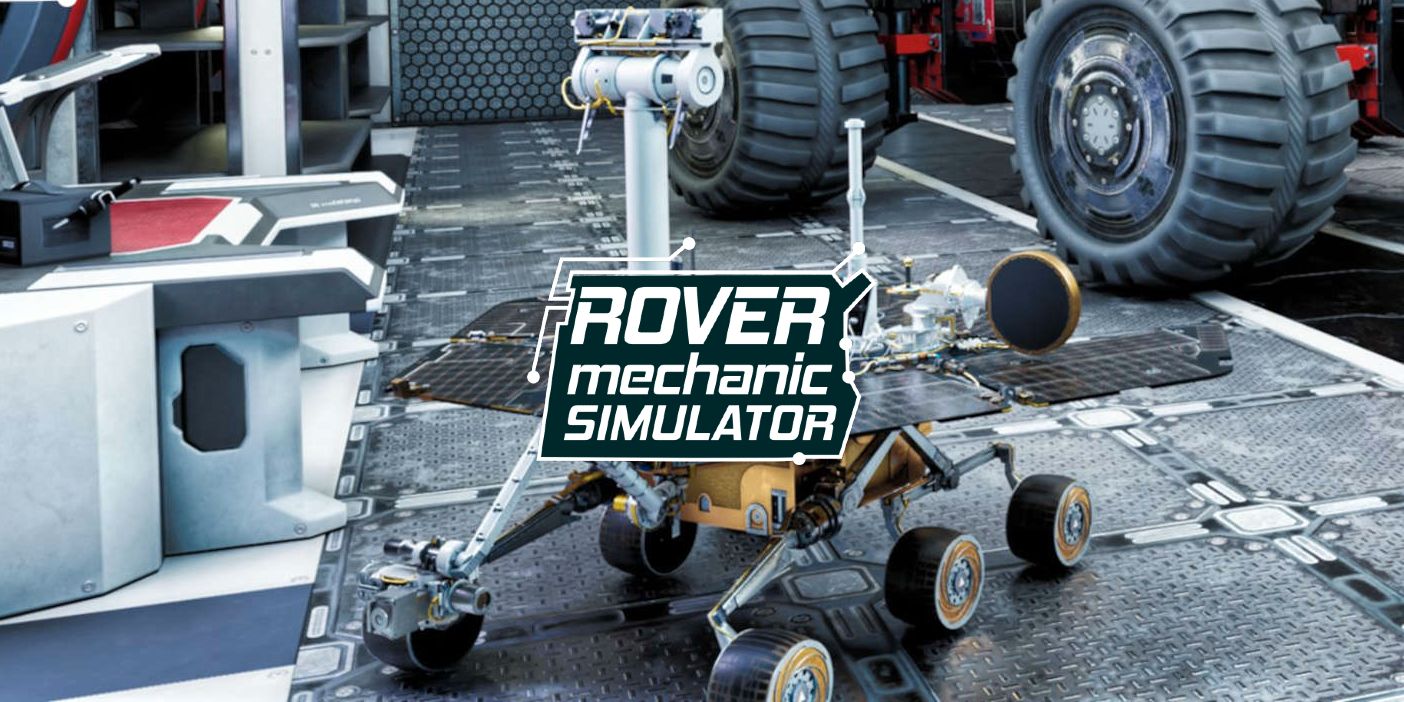 While the greats of the simulator genre are almost entirely rooted in replicating real world activities – farming, public transport, construction, medical care – they’ve also been to some out-of-this-world locations. Rover Mechanic Simulator from Pyramid Games, which touched down on PlayStation consoles in December 2021, is the latest game to take the simulator genre beyond our horizon.

It’s an unspecified time in the future and humans have finally managed to step foot on the surface of Mars. We’ve made bases there and appear to have some sort of infrastructure set up. None of this is explicitly explained by Rover Mechanic Simulator – you’re simply instructed by the game to enter the hanger which acts as your only explorable space and get to work – but it’s all inferred by details in the game. For whatever reason, despite having progressed technology far enough to land on Mars and set up bases of operation, humanity is still using exploration rovers to explore the surface of Mars. The more you think about it, the less it makes sense, so It’s best you just ignore the fact that you’re operating out of a hanger to fix out-dated rovers on the surface of Mars where flying drones are literally hovering outside.

Within the hanger at the centre of Rover Mechanic Simulator’s experience are all of the tools you’ll need to complete your role in the game. That role is to accept jobs to fix malfunctioning rovers, analyse the fault and then fix it. In practice, that’s quite a hands on process.

Jobs are accepted via a tablet which then triggers the arrival of the rover in a crate. From there, you’ve got to use a crane to move the crate to a staging area, either a table or a hydraulic lifting area. Once there, the rover is automatically unpacked and the real work can begin. You’ll have to figure out which part of the rover is malfunctioning, remove it, fix it or replace it, then boot up the rover’s drivers again. Rover Mechanic Simulator enables these processes via a trio of views that enable their own actions. With a press of the D-pad buttons you can flick between these views; one to add a part, one to remove a part and another that analyses the quality of a part.

Within the detail of each job, it gives you an initial assessment to go on. It lists parts that could probably be broken. It’s not always entirely accurate but it’s always in the approximate description. For someone who’s not entirely familiar with NASA rovers (like 99.9% of the entire population), that’s not always helpful. Sometimes it’ll be a guessing game as you pour over each individual part, using the analysis tool to scan them meticulously which colour codes them, hoping to stumble across a section that glows read and needs fixing.

Once you’ve found the issue, you’ll get to the most gratifying aspect of Rover Mechanic Simulator. Select a part of the rover with the removal tool and you’ll get to unscrew and remove the piece. Holding square, screws will get removed, cables will be unplugged and pieces removed. I’ll confess, I’ve never personally had much interest in rovers but even with my limited intrigue, this aspect of the game is fascinating. The models that are included here are incredibly detailed and having cross referenced against images of the real world versions, are incredibly lifelike. Much like the simulation genre is famous for, it’s easy to get into a gratifying flow state as you break down the rover in order to fix the fault.

That’s a trend that continues into fixing the rover parts. At a table, a large number of parts can be further disassembled into their component parts. Sure, using the 3D printer in the hanger, it’s possible to print entire parts called ‘sets’, but that can be expensive when only one small component needs to be swapped out. It’s much cheaper and admittedly far more enjoyable to find the problem and 3D print just that. Unscrewing sections of a rover, analysing the detailed innards for flaws and then printing a new one to fix it is ultimately rewarding. The same can be said about the soldering you’ll have to do to repair PCB’s. It’s relaxing and strangely enjoyable.

The last brain tickling aspect of Rover Mechanic Simulator is cleaning up certain aspects of the rover. If a rover part is covered in dirt, it’s not possible to tell how damaged it is. To analyse it, you’ll have to clean it first. This is done at a table as you use compressed air to blow away the dirt. It’s another satisfying aspect of this game as you drag the reticule over the item and watch it turn from an earthy orange colour to the electronics below.

Once all of this has been done and the fault with the rover has been repaired, you’ll have to restart the drivers of the vehicle. This involves completing a pipe puzzle similar to those you can find in PS4 Spider-Man game. You’re tasked with placing squares to connect a battery with a processor ensure that the correct amount of charge is achieved when the connection is complete. To achieve this, you’ll have to add green and red blocks with add and subtract amounts of charge respectfully. These puzzles are incredibly basic with only a hand full of them ever offering more than a mild challenge.

Unfortunately, the lack of depth in Rover Mechanic Simulator means that the rewarding, ASMR-like gameplay looses it lustre quite quickly. There are only a hand full of rovers in the game – Sojourner, Curiosity, Spirit and Opportunity – and two of these are identical (they’re “the Twins”). Of course, the source material is limited here – there have only ever been 5 Mars rovers – so this isn’t a massive pool to pull from. The Perseverance DLC (released for the Steam version) isn’t included here either. The mission variety doesn’t help either. There’s some real repetition in the jobs, focusing on wheels and cameras regularly.

If it wasn’t for the fact that I was reviewing Rover Mechanic Simulator, I doubt I would have opted to play this game for long enough for the repetition to set in. There’s a number of issues with this game – some mechanical, others thematic – that are a real turn off. This is very obviously a game designed for a PC with a mouse in mind. At no point did it ever feel entirely comfortable played with a controller on the PS4, even after 10 hours of play. There’s a radio with 6 themed channels which acts as the only ambiance in the game. When it’s not turned on, the game is entirely silent, leading to a complete lack of atmosphere. Unfortunately, some of the songs that are played by the radio are frankly awful too. Not just “bad enough to ignore” but so insufferable that I had to go out of my way to turn of the radio. I eventually just put on a podcast to fill the silence.

More than anything though, this game lacks personality. It’s just so dry and by the numbers compared to the best simulator games. There’s the occasional attempt at humour in the job descriptions (complete with a few typos), but the whole experience starts to feel like busy work. That’s partly because the progression cycle, allowing you to earn resources to pay to complete bigger and more complex jobs, is virtually non-existent. After an hour of play, you’ll have enough resource to take on any job which makes this aspect of the game redundant.

Its issues mean that Rover Mechanic Simulator is a middling experience. There’s a solid core to this game surrounding some impressive 3D rover models. It offers that methodical game play that accommodates gratifying ‘flow state’ sessions to really get engrossed in. It gets repetitive quickly though because of clunky controls, limited depth and a lack of personality.