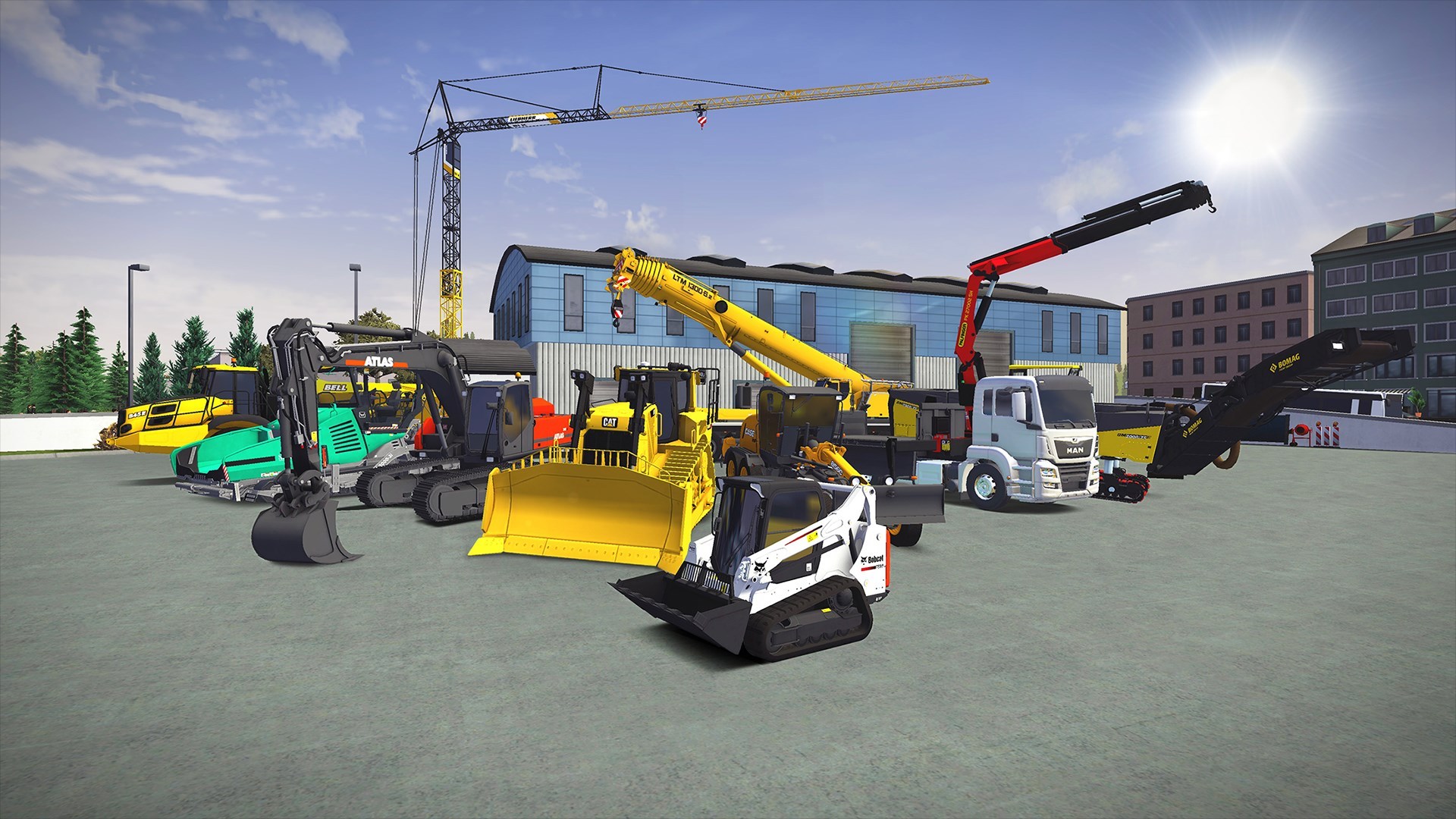 Construction Simulator 3 – Console Edition and I got off to a very rocky start. I had to re-start the game’s tutorial missions three times. The first time I started the game, I dropped a beam that I was meant to be placing on a roof prematurely and it glitched out inside of a building, making my objective impossible. Restart. On my second attempt, I made a real mess of flattening out some mounds of dirt and when trying to restart that section, I couldn’t make sense of the menu and accidentally clicked the abort button instead. Restart. The last attempt was that damned flattening mission again and after two hours of trying to get the game to recognise that the ground was now flat, I rage quit. I later learned where I was going wrong – I needed to remove the excess soil rather than just flatten it out over the whole area – but the tutorial didn’t give any indication of that.

With a start like this, you might expect me to go on to trash Construction Simulator 3 – Console Edition. I’ll be honest with you, if it wasn’t for the fact that I was trying to give it a critical appraisal, I’d have probably binned it right then and there. I’m glad I persisted though, dear reader, because underneath its issues, this game hits that boring-but-deceptively-engaging game play bent that Farming Simulator does so well that’ll keep you up till 1AM saying “just one more job”.

Construction Simulator 3 takes place in the fictional German open-world city of Neustein. At the start of the game, you get to name your wouldbe builder as well as pick a profile from a small selection of avatars. These selections don’t effect anything meaningful because the plot is always the same – you’re an ex-game developer who has left the pixels behind in favour of pick-axes. Going into partnership with a grumpy construction veteran called Pete, your role is to build a barebones firm with just one vehicle into a company that can pull of big builds and a series of larger, more impressive campaign jobs.

To do this, you’ll be using a plethora of the 50 officially vehicles like dump trucks, rollers, asphalt layers, cranes, diggers, drill bases and more from the likes of Caterpillar, Liebherr, CASE, Bobcat, Palfinger, STILL, MAN, ATLAS, Bell and more. The vehicle models, at least those you use, are highly detailed and feel like faithful recreations. You can flit between their functions with a press of the button and their transformations – from truck to crane arm, for example – are fully animated. If trucks and excavators are what you dream of at night, you’ll have fun playing with these. Throughout the entirety of Construction Sim 3, you stay in a vehicle. You can instantly jump between them on the fly but there’s no first person view outside of the cab and on your own two legs.

Each of the game’s jobs is broken down into stages, each of which has its own vehicle requirement and success criteria. Say, for example, a section of road has collapsed and you’re contracted to fix it. First you’ll need to clean out the debris of the hole. Then you’ll need to travel to the Gravel Pit (which is a quarry to you, me and everyone outside of the Wu Tang Clan) to get some gravel. Once you’re been to the silo and filled up a truck, that gravel needs to be dumped into the hole in the road and compressed with a roller. Then covered with asphalt and finally compressed again. Using your fleet of suitable vehicles, you complete each step (or skip it in the options for a smaller payment). Each job is broken down like this, from cleaning up fallen tree’s to building bridges. I’d say some jobs are a little too granular in their stages while others lack specifics that might have made them easier to understand (I’ll be honest, I had to google ‘scarify’ to complete one job), but for the most part, the objectives are balanced.

Controlling the vehicles in Construction Simulator 3 is quite a complicated undertaking at first. The journey from PC to console has been a tough one as the inputs available on the DualShock 4 pad are obviously far lower than that of a keyboard. The right stick on the pad controls the camera but 9 times out of 10, it also controls part of a tool on a vehicle too. On the cranes, for example, a click on R3 changes the input on the right stick from the camera to the length and angle of the second arm of a crane arm. The kicker here is that you can’t change a camera angle as well as that section of the crane arm at the same time. There’s quite a lot of camera angles to use here from an orbiting static cam to a driver’s eye view but none of them solve the regularly irritating issue of being unable to change the view and move sections of a tool at the same time. It’s also maddening when you’ve set up a camera where you want it but need to reverse, as doing so swings most of the camera’s around to see behind the vehicle.

Pulling off the majority of the jobs involves following simple steps. Drive here. Dig out this hole. Follow the waypoint to this direction. Most of these are clearly laid out by cones and tape but to help, there’s a construction mode. With a tap of triangle, the world goes black and white but highlights in colour things like dig sites, the location you’re supposed to position your vehicle and awards (which act like collectables throughout the world). Using this can make some of the more confusing jobs much more palatable.

Once you’ve adapted to these niggles and learnt the terminology the game expects you to know, Construction Simulator 3 hits a zen like gameplay loop that’s chilled but not boring. This game treads the tightrope between doing boring jobs repeatedly (like Farming Simulator) and the instant gratification of doing monotonous jobs (like House Flipper) very well by rewarding you quickly and generously for completing objectives. It then pushes you to expand your fleet of vehicles by offering diverse jobs with more demanding requirements. If you’re been frivolous with your cash (or racked up too many speeding fines by driving like a maniac – something you can turn off in the options) you can rent vehicles to do the job if you can’t afford to buy them.

Fixing roads. Gardening and landscaping. Laying foundations. Fetching rocks and trees. Building homes. Bridge building. These all lead to bigger and more rewarding jobs at the industrial estate and eventually, building around the skyscrapers of the main Neustein city hub. There’s 70 jobs in total to complete that’ll keep you going for hours if the game gets its hooks into you.

As for how much of a simulation Construction Sim 3 actually is, the game knows its limitations and isn’t asking you to be 100% accurate with what you do. Take excavating for example – when asked to dig out a space, you’re given a guide but you’re not aiming to match it exactly. The control scheme wouldn’t allow it even if you were. Instead, you’re trying to get close and the game will clear up the rest before the next stage.

It’s unfortunate that there’s a lack of general polish in this game. The other cars in the game, those just driving around Neustein, look poor in comparison to those you’re driving. They also disappear randomly when they are on a collision course with you. Textures on the flooring, as impressive as they are when they’re displaying muddy tyre tracks on tarmac or changing when soil is being dumped there, often flicker and disappear when you’re moving the camera. The UI is a real cluster truck of menu’s that overlay a lot of the screen and, while they’re relaying importing information, feel more like a mobile game solution than a console one.

Visually, the game is a real mixed bag. For every beautiful leaf blowing in the wind as you drive through the seaside town of Peckling am See, there’s a crappy ground texture that looks stretched out. While it’s impressive that the mirrors in the vehicles work, it doesn’t matter much when the only thing in your rear view mirror is a janky looking car. Then there’s the soundtrack – classic rock that feels like just one big power cord, you might want to mute this and play your own tunes before it becomes repetitively grating.

The journey from PC’s to PS4 has not been a kind one on Construction Simulator 3 – Console Edition. The lack of control inputs has made using the generous real-world excavators and heavy machinery a bit of an unnecessary chore. Fighting the camera in any game isn’t fun and you might be doing that a lot here. Those with the patience to can forgive its foibles and push through the issues that Construction Sim 3 has though will be rewarded with that strangely therapeutic and relaxing game play loop. It’s surprisingly rewarding to stand back and survey your virtual creations when they’re finished but there’s plenty of room for improvement with the inevitable next instalment in the Construction Simulator series.

Construction Simulator 3 – Console Edition is available on the PS4 (review version), Xbox One and Nintendo Switch.