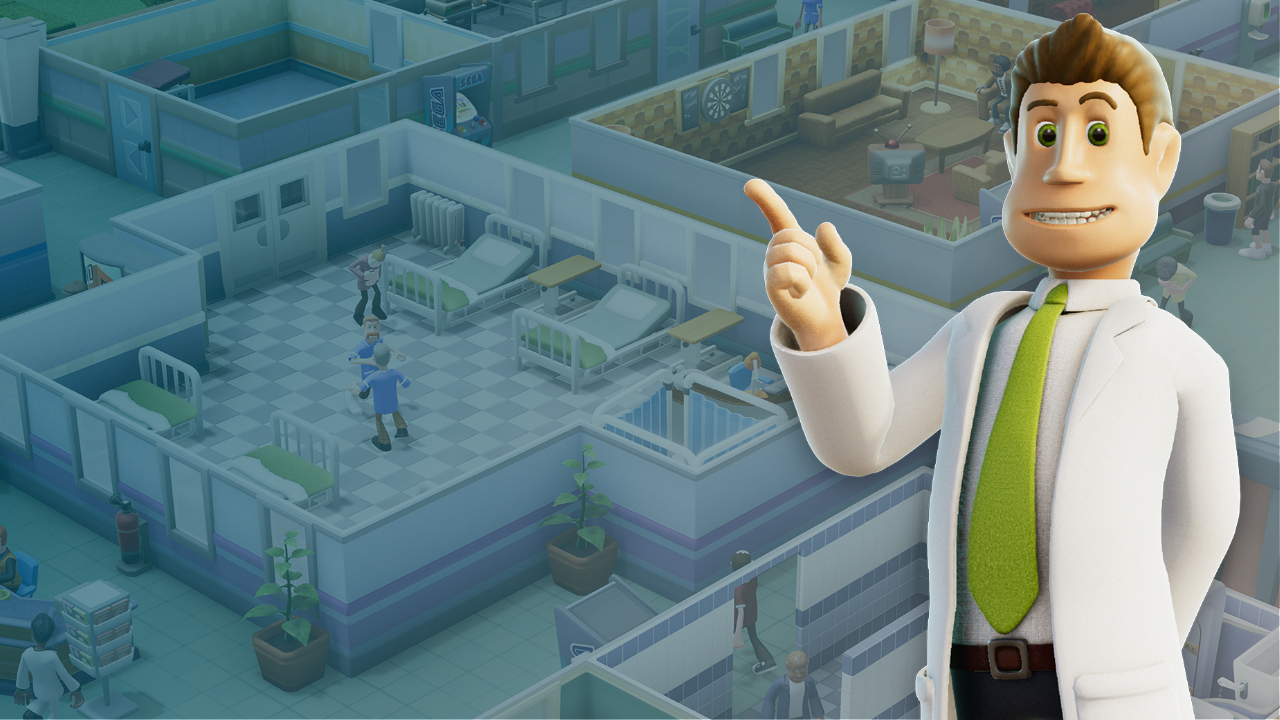 In the ever-growing list of 2020 video games that I have my eye on, hiding there in the corner with a small flag amongst the Doom Eternals and the Cyberpunks and The Last of Us Part II’s was the console port of Two Point Hospital. A game that I’ve been so very excited to jump into, no less because it scratches that itch of a video game I’ve seemingly waited the longest time to play once again – a genuinely good console management simulator.

It feels like it’s been a fair amount of time since I’ve switched on my PS4 and kicked back with a laid back simulator. The Sims 4, whilst it revels in enormous success and was recently free on PS Plus, never really hit that sweet spot, feeling overly convoluted and a port which does it’s best to remind you that you really should be playing it on PC. I don’t have a system that was capable of playing the original release, so hoping for a console port was the best I could do. Thankfully, those who yielded the power appeared to be listening. Two Point Hospital is on my PS4 and I couldn’t be happier.

You would be too if you had ever spent an inordinate amount of time playing Theme Hospital as a kid. Released in 1997 by EA and developed by the almighty Bullfrog, the addictive nature of running your own hospital with its comedic illnesses and slapstick humour throughout left a lasting memory, and even got itself an ill-fated PlayStation port in 1998. Sadly the console versions back then were lackluster in its transition from mouse and keyboard to controller and was left largely forgotten, with the lasting legacy of the PC build firmly intact.

Two Point Hospital has been designed and developed by folk who worked on Theme Hospital, namely Mark Webley and Gary Carr, so its spiritual predecessor’s feel would undoubtedly run through the halls of Two Point. It feels more like you’re playing a straight up modern-day sequel rather than a semi-remake of a classic.

If you’re unaware of what on earth I’m talking about, Two Point Hospital tasks you with building your very own hospital. Running everything from where the janitors should be to training staff along with laying out your hospital as you see fit. You’ll be hiring staff, building new wards by knocking down nearby houses, working out where to place an arcade in order to keep the patients entertained (maybe not that last one, but it worked for me). It’s essentially up to you to keep everyone happy, patients and staff alike, along with various VIP’s that have a habit of turning up exactly when things aren’t going particularly well.

The game has its tongue firmly in its cheek so don’t expect to be curing any real life diseases. From the beginning you’ll be building rooms so patients can have pans removed from their head, to building a psychiatry ward to talk people out of believing they are Freddie Mercury. It’s up to you to ensure the Doctors and Nurses are trained in the rooms they work in, otherwise death will be knocking at the door (you also have to deal with ghosts if this happens). Keeping the peace is a 24-hour job so looking away from the screen is a task in itself. Whether it be ensuring there are enough drinks machines, benches for the patients to sit on outside the rooms, a staff room fully stocked for your staff’s amusement and ensuring there’s enough trained colleagues to take over when breaks occur.

It’s a persistent juggling act and one that can feel overwhelming at times. Fortunately so long as you have the funds in the bank it’s never an impossible task. Should you go under your options are either to take out a loan or put a mark up on your prices (treatment or retail. Or both). Patients can get angry if they’re charged too much (apparently $50 for a Coke is ‘too expensive’?) and staff can feel undervalued if paid less than they feel they deserve. At one point (heh) I ended up very much in debt and I still have no idea how it happened. If you’re overly frivolous it can come back to haunt you, so the balance of servicing the patients along with the hospital itself needs to be at around a 50/50 split. I learned some lessons. No hospital needs an enormous fountain display in the middle of the hallway, apparently. Probably best I don’t run my own, to be honest.https://web.archive.org/web/20200616034908if_/https://www.youtube.com/embed/zt7KXD-QPpE?feature=oembed

Additions to Two Point Hospital that weren’t in Theme feature star ratings, room prestige and hospital levels. As you develop your hospital and the skills of your staff, your hospital will begin to develop star ratings. A one-star hospital will allow you to move on to a brand new hospital, though you can stay in that hospital to get the full three stars if you choose by completing more objectives. You can return to hospitals at any time if you wish to improve them. A higher star rating will benefit your hospital levels and will attract more patients and better staff to work there. Room prestige is primarily a way to keep your staff happy if they’re working in a single room for too long. This may include adding windows, changing the decor and adding plants. They will quit if they’re stuck in a boring room for too long, so adding various small upgrades will keep them focused on their work and bleedin’ happy about it too. You’re able to earn Kudosh by setting various objectives or receiving a certain number of awards at the end of every year. This can be spent on new items that can brighten up your hospitals.

Staff training is a big focus of Two Point Hospital and all staff can be upgraded throughout, receiving promotions or qualifications they may not have had before. Staff all have individual needs and keeping them met will take up a fair chunk of time throughout your playthrough. Once they’ve qualified for a specific position they will expect a promotion, so ensuring the money is at hand to do so will be important.

It’s worth mentioning that the port itself is terrific. I mentioned above that certain games in the management/strategy genre that are ported to console generally never really feel at home and such, my attention can be pulled elsewhere if it doesn’t feel as smooth as you would expect. Fortunately, the console port of Two Point feels great (with kudos to Red Kite Games) and just at home on a controller as it would feel on PC. The menus (of which there are many) are easy to navigate and the hospital navigation is simple and unimpeded by the lack of a mouse. Your top and trigger buttons work as controls for the camera, zooming in or spinning the camera around the hospital. It feels wholly natural and one of the aspects of the game I was hoping would be focused on the most. Sterling work.

Visually there’s little to complain about. The cartoonish style from Theme Hospital is present and correct and naturally fits the world perfectly. It’s always fun to zoom in on various rooms to see the animations of the patients undergoing treatment. The audio is also hugely entertaining, with Two Point Radio offering some hilarious one-liners that have had me laughing out loud throughout. The tannoy announcements are also absolute gold (‘A hospital VIP is coming. Please try to look healthier than you actually are…’ and ‘We’re sorry for the litter. That you dropped. On our floor’ particular highlights). There’s also very familiar SEGA sound effects you’ll recognise coming out of the arcade machines if you listen closely.

There’s a fair few bugs that can be frustrating, particularly in the games opening menu screens, though they’re hardly monumental. I’ve had moments where I’ve gone to open a new hospital only for the selection not to register, forcing me to restart the game in order to continue. From a technical standpoint it’s perfect for most part. Anything that’s fiddly can seemingly be ironed out. Hopefully they will be.

Two Point Hospital is a glorious port that should keep any fan of the management genre happy as Larry, and Theme Hospital fans should jump on this immediately. Damn near everything you loved about the game is here on display, along with modern objective-based missions and star ratings that keep you wanting to improve your hospitals over and over.

This is one Hospital I’ve so very glad to visit over and over again.