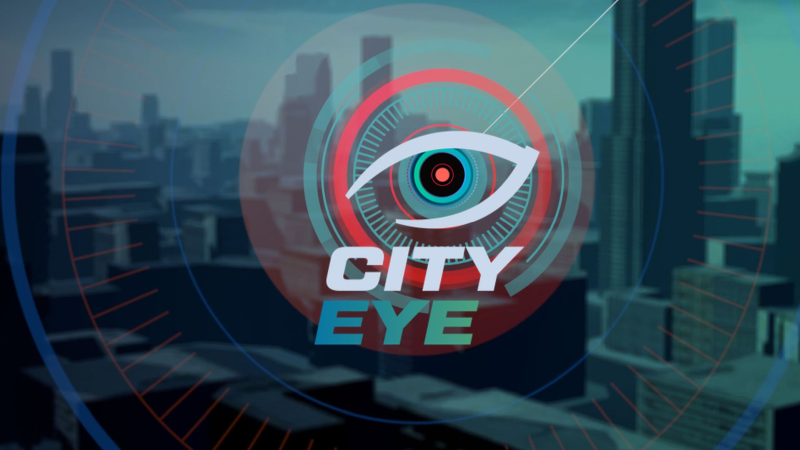 Become a surveillance officer restoring law and order in this city... or maybe don't? The Finger Guns review.

I’m going to be honest, I don’t know what I quite expected from City Eye, a game where you spy through the CCTV of the city to tattletale on crime. It’s an interesting concept that this would be a casual game – and it is. It’s just maybe a bit too casual? Maybe what I expected was more than one city, more than six crimes to look for, and more environment to discover but I guess I can’t have it all. Let’s get into it.

Eye in the Sky

I can’t say I have ever wanted to be a surveillance officer, but I do love a game that allows you to undertake a profession you never thought you’d endeavour to in your own personal life. City Eye is an extremely simple concept. Strife City is… rife with crime (Come on, it was right there) and the crime level needs to be lowered because quite frankly, it’s an episode of Law and Order in there.

The player is given a very quick briefing on the game, introducing you to three types of camera that you can upgrade too. A basic camera, a semi-automatic camera, and an automatic camera. Your new profession is to take shifts, installing cameras by clicking on the appropriate locations and then viewing each camera to look for crime. Marking targets lowers the crime rate in that location, and you will receive an end of day report to let you know how many crimes you caught, how good your response was and how much money you earned.

City Eye uses WASD controls to move and zoom with the camera, as well as click and point to target crimes. No issues here, you have the option of a map that highlights where your camera is pointed, to act as a go between of cameras or just switching between cameras using the keyboard. Interestingly, if you are on the map, the map will constantly flash different colours with no rhyme or reason as to why it is happening.

Another thing that is very much glided past without much explanation is the end of day report. Your report is split into perfect response, good response, missed response and others. It doesn’t actually let you know what the difference between perfect and good is for example. Did I call all the right people? Is it a timing thing? I think I managed to eventually learn that it is calling the right service, but since the game won’t let you call any service that isn’t appropriate, I can’t really wrap my head around it. The game is at its most interesting when your street is full of basic cams because it requires you, the player, to actually look for crime. Crime or emergencies can vary from fires, drug deals, arson, vandalism and faintings, to name a few.

Big Brother Was A Better Show

City Eye lacks depth of challenge and has missed the opportunity to actually remain interesting throughout the playthrough. Semi-Auto cams will be able to highlight what crime is in the the cameras view for you to point on. Unfortunately, once you’ve played about an hour, you’ll get to know a pattern. If you are on x street and an auto-cam says there is a fire in the area, the same building will always be on fire. If you know the police need to be called, it will be the same NPC’s fighting in the exact same area of the road. It ends up turning into a memory game as opposed to something that is interesting or involved, and once you get enough money to upgrade to automatic camera’s there is literally no work to be done and the day shift gets no faster.

At times, events will happen where certain people have to be located and deemed as suspects. Maybe a drug raid, or a group of arsonists that need tracking down. This would be considered interesting if you could suspect any NPC, but City Eye only lets you suspect the ones that are actually suspect, so if you’re really that stuck you can mindlessly click on everyone until it lets you suspect them.

The NPC’s are made up of the same 8 or so character styles – guy in suit, yoga girl, casual dude, business woman, thug, you get the picture. What made me audibly laugh is the lack of mystery to anyone or anything that might be about to happen. If someone is walking the street who is suspect, or a crime is happening, or you’re actually stuck locating the crime that is being highlighted, don’t fear. The NPC’s will literally Phoebe Buffay run past any crime or suspect for approx. 5 second before walking like an actual human again. So just look out for anyone who is participating in the ministry of silly walks and you won’t miss a thing.

I wrote earlier about how the most interesting part of the game is when basic cam’s are everywhere. That’s because you will be more engaged here than you will be in the rest of the game. Once you’ve managed to get enough money to upgrade to automatic cameras, starting your shift literally becomes a contest of how many TikToks you might be able to watch before your shift ends. The time it takes to finish a shift is quite lengthy, probably between 5-10 minutes. So with nothing to do during that time, it can be become a literal snorefest.

What is frustrating is that because less crime is happening, you are receiving less money to upgrade other areas, and it bottlenecks your progress completely. It just unnecessarily stretches out an already quite uninteresting game. It’s counterintuitive and just feels a bit pointless. There wasn’t another mechanic added like a fast forward button, or bonus in funds due to their being less crime.

It’s explained that the aim of the game is to get less than 20% of crime in the area to move on to the next location. Well, don’t I have egg on my face. I played this game for an extra two hours than I needed to try and get to said new location. When I hit less than 20% in Strife City, I was so confused as to why I wasn’t moving on. It turns out, what it actually meant was you require less than 20% crime on the road you are monitoring. So there are only four locations to get to less than 20%. I at least was hoping for another city, perhaps one by the beach that could offer new environments, new crimes, and a bit more variety than the apparent memory game I have opted to play.

In summary, I think City Eye could have been a really interesting concept, but it lacks depth in so many areas and falls flat quickly. This extends to the visuals too. I experienced a lot of lighting faults and screen tearing, where half the road would just be black at certain angles. However, that menu music? That does slap.

City Eye is a surveillance simulation game that has an interesting concept but disappoints in many areas. From bottlenecking progress in late stages by padding the game unnecessarily to repetitive mechanics and a lack of variety, the game fails to capitalise on an interesting premise. You’ll find yourself less likely to be fighting crime, and more likely to be waiting for them to happen.

City Eye is available now on PC via Steam.