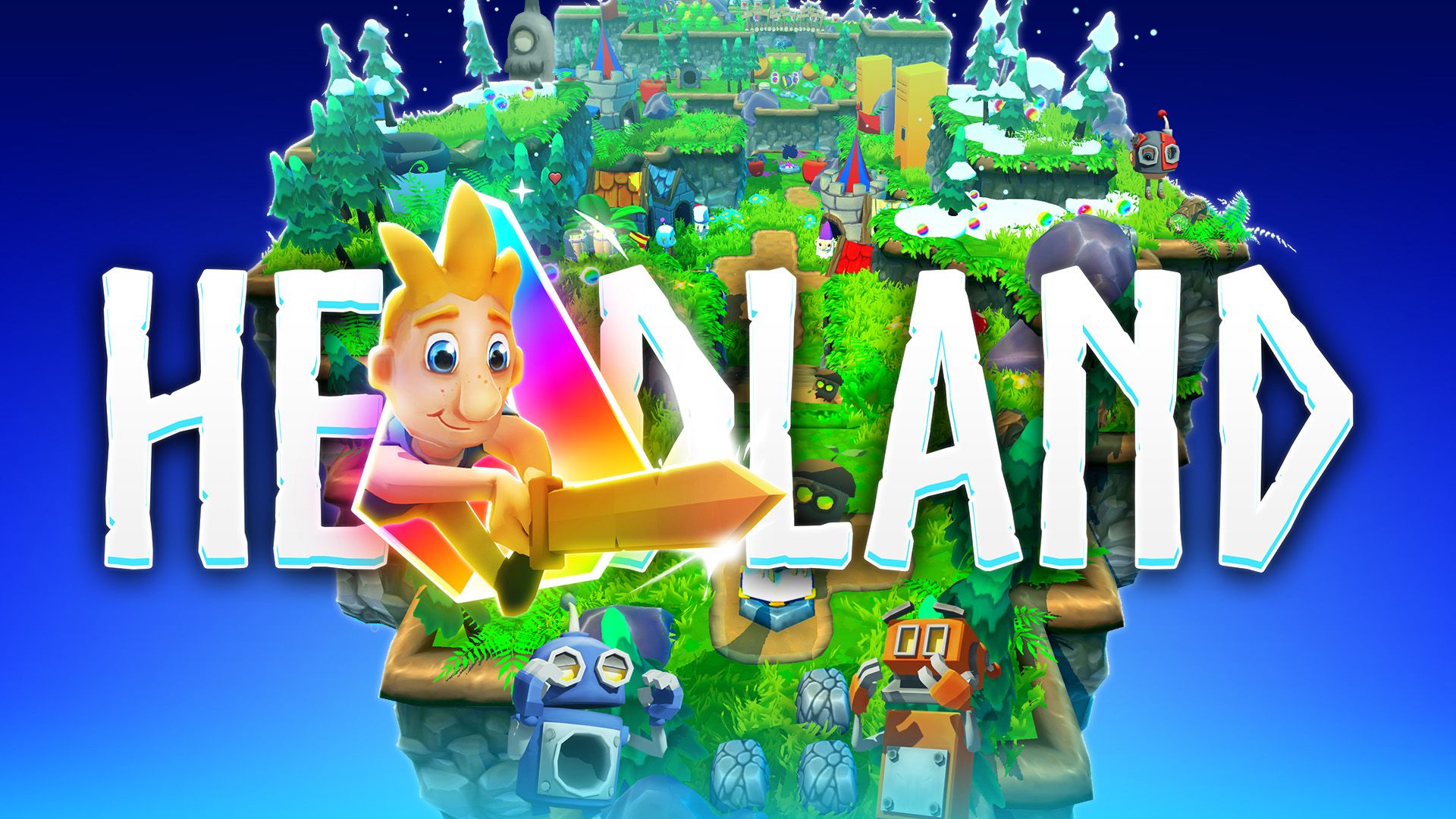 Headland comes to Switch! The action adventure game all about fighting for your imagination. The Finger Guns Review

Headland is a fun and engaging adventure rich story coming from Mobile to Nintendo Switch. Does it hold up on the console? The Finger Guns Review.

Headland is an action adventure game revolving around Nor, a cheerful character who has had his imagination core shattered. He must find the pieces with robot friends within his imagination to restore it back to limitless creativity.

An Introduction Into the Mind

Headland’s story is not initially very descriptive, the game opens as the player meets Nor in his room as he draws when a colourfully vibrant vortex opens up and invites your presence. This is certainly down to perhaps some interpretation, likely that Nor has started to daydream and been whisked away in said daydream (This happens a lot to me at work, so I certainly feel ya there Nor!)

The story starts to develop quickly as you find out that Spud, his fellow robot friend, has had his imagination core shattered. Spud’s powers allowed him to create and give power to many things in Nor’s world. Spud creates bridges and objects whilst also imagining enemies to be less threatening and turning them into seemingly futile items.

With Spud’s core shattered it is up to Nor to try and locate the missing fragments so Spud can have his powers back again. Enemies can now no longer be transformed into fluffy distractions. Nor must battle and become strong if he has any chance of helping Spud.

My preconceptions of this game fell flat once I really got my teeth into it. Sometimes adventure mobile games can be as simple as going from A to B, fighting some enemies and saving the world. Yes, this is a lot of the plot, however it is more in depth than initially considered.

As you encapsulate Nor you will need to make some decisions which you can advanced during the game. Will you have more life or more attack? Will your sword be strong and slow? Or fast and defensive?

Collecting resources allows you to upgrade weapons. Although there is not a vast selection of weapons, the player still has freedom to select their preferred attack. Whether a more defensive stance or heavy on attack. These different swords are made up of different materials such as wood or metals.  Nor can collect imagination orbs, logs, rocks, cogs, coloured keys and lightbulbs. Some are much more accessible than others. Logs and rocks can be destroyed with Nor’s sword. Cog’s can be found during that, but are mostly gained in smaller dense enemy area’s.  Inspirational light bulbs and keys much more will need to be achieved.

Coloured Keys can be used to join a small arena with big rewards. The different colours represent the increased strength in enemies, the amount of rounds of enemies and the height of reward offered between rounds and once completed. This just adds that extra depth to the game than just completing levels.

Whilst imagination orbs are placed around the map to show your path, these are still limited and need to be spent wisely. There are sometimes in level costs to orbs you will need to purchase. At the end of each level, it will give you an option to spend more orbs for a chest containing an unknown reward. The bigger the chest, the bigger the reward; although it comes with higher cost. Players will need to choose wisely on how they spend orbs.

The enemies can get very tricky, and Nor only starts with 3 lives to begin with. A hit from the enemies will cause that life to be lost. If all 3 are gone, Nor will die and need to go back to a checkpoint area. If Nor does happen to meet his demise, resources will be lost in the process. These resources could be the difference between upgrading your sword or not and therefore it’s vital to not lose too many resources or you may be collecting for a while. Additionally upon his death a tiny little gravestone will commemorate the life you lost in the location you lost it. You can choose to destroy this gravestone in which some enemies can be defeated for resources.

Headland’s main base is on a ship where greenery resides and Nor can walk around to upgrade weapons, or enter secret locations gathered with keys to gather more resources and fight enemies for experience.

From the ship you can enter the world base which is reminiscent of earlier Crash Bandicoot games, showing you the levels on a map and following a linear route to each level. There are many levels to play and each level holds secrets within the level ground. The player will have an idea of what is to come too. Each level is represented with an Icon, sometimes being one of the precious shards. Other icons might communicate a certain enemy type, or a large amount of resources that could be gathered on the level.

Both the ship and each level have fun designs to enjoy. The colours are extremely vibrant, and it looks almost like an old school 3D Mario game with the colour palette. You have room to move, and nothing feels too clunky. This is a game that is derived from mobile platforms and you wouldn’t be able to tell this from the smooth controls and combat hitboxes. Different locations vary from grassy lands, glowy caves to sandy desert gates with wood pine walls. Sounds are used creatively, from the sound effects of combat, exploration and general background sounds. It is an enjoyable retro feature walking into a ‘secret area’ and having a sound effect for that specific trigger. The reward system lit up in my brain hearing that sound. Rewarding me for feeling smart enough to find this little location with lots of goodies to collect for the trouble of searching.

All levels have a focus, whether this be helping other character friends, or helping Spud find the Shards. This keeps the player engaged with the story and I never felt that I was just meaninglessly exploring random areas.  There is a wonderful level where the town has been destroyed by enemies and Nor must use imagination orbs to help rebuild this. Some areas will require you to find keys to access. This can be achieved by clearing an area full of enemies or stumbling upon them in nooks and crannies of the perimeter.

When fighting a boss the environment around you can rift to black and white to signify the colour and creativity being lost in imagination. Defeating the arena will restore the colour.

An Internal Battle of the Mind

Speaking of enemies and arenas, combat is a large part of this small compact game. Although not intricate in design or vast in moves, it still offers a good challenge. Nor can swipe his sword at enemies using your general attack button. Depending on the weapon chosen this can be quite slow or you can manage to get in a few hits pushing enemies back with other weapons.

Enemies range from tiny toadstool mushroom-like monsters to large dogs or giant boulders with arms. The bigger they are, the more strength they tend to have. Some enemies can dash at you stunning you and requiring you to release Nor from stun. Others can shoot stinging bee’s or throw rocks. This all seems manageable solo until your location is over run by 14 tiny toadstools, 1 large mushroom, 3 dogs and 2 spitting bee plants!

At the end of some levels Nor will enter an arena of enemies that will gradually increase in strength. Different waves of enemies will occur and Nor will need to defeat all waves to be able to collect the Shard and take it back to the ship.

Although Nor only has one swipe of a sword, your tactic will need to be different for each enemy. I had to find my footing but mostly my tactic involved waiting my turn, jab jab jab, and then running away a bit. It worked fine for me, but occasionally I would get impatient

Headland is exciting and probably gave me a very small inspirational taste test to light roguelike games when it comes to combat. Dying is frustrating, but coming back to life and kicking ass is worth the feeling from dying and does not feel menial or aggravating. Arena’s do not become boring nor (hardy ha) do end of level wave challenges.

Headland is an imaginative journey. Reaching the finale, I truly felt a sense of accomplishment. I then realised this was only the beginning of the end! When a bigger finale set sail for me. The finale adds even more creativity than what has been played and is entertaining although the genre does not push any groundbreaking boundaries Headland adds a mixture of jollification of fun for all ages.

Headland is an action adventure journey into the imagination. Although not breaking any new ground in the genre, the story, gameplay and combat is exciting and suitable from any age player. It’s full of vibrant colour, an endearing story and secrets to uncover that are worth spending your time on.

Make sure to follow Finger Guns on our social channels –Twitter, Facebook, Twitch, Spotify or Apple Podcasts – to keep up to date on our news, reviews and features