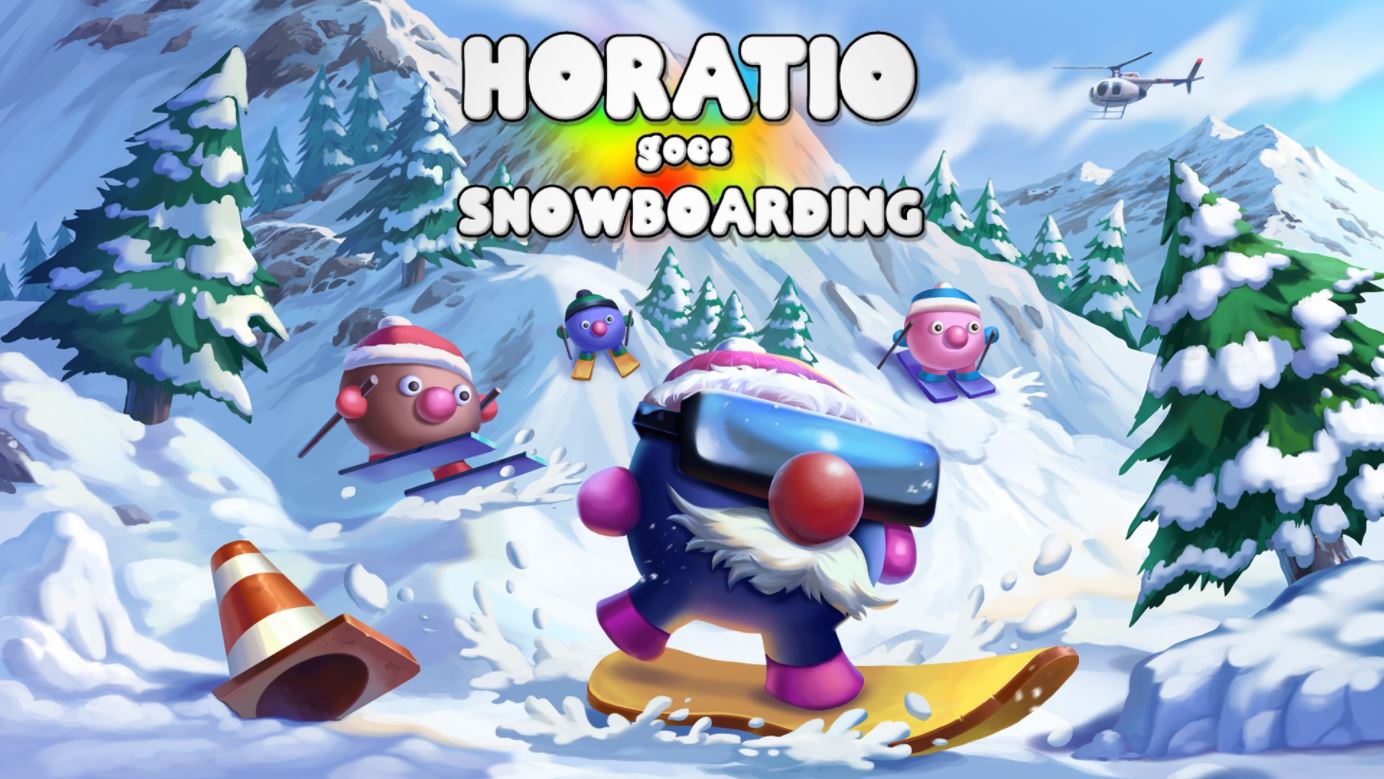 Infinite State Games are well known within the Finger Guns team for making fun, original arcade games. Rogue Aces, Don’t Die Mr Robot & Family Tree are all enjoyable titles with innovative mechanics that might riff on retro classics but feel wholly original. Their latest game – Horatio Goes Snowboarding – is a break from this trend. Rather than an original creation, it’s an unofficial but undoubted “spiritual successor” and modern day take to another game. That game is Horace Goes Skiing.

Remember Horace? He was a mutant humanoid… thingy that starred in 3 ZX Spectrum games during the 80’s. There was ‘Hungry Horace’, a Pac-Man clone, ‘Horace and the Spiders’, a reasonably good platformer and the aforementioned ‘Horace Goes Skiing’. The latter was a two-fer-one clone of Frogger and Atari’s Skiing. Horace, now owned by Subvert Ltd after being an IP hot potato for a while, has been lying dormant. It looks as though that would remain so as the owner is making sure that no one else even uses its likeness without getting a copyright strike. Well, Horatio Goes Snowboarding feels like a way to honour Horace and his games without upsetting its IP owners. This isn’t a direct copy but almost all of the staples of Horace’s skiing adventure can be found here.

Much like the game from which it takes inspiration, Horatio Goes Snowboarding is made up of two different segments. The first is a short journey across a town to pick up a snowboard then board a chopper. Standing between Horatio and his lift to the slopes are a series of twin lane roads. Driving along those lanes, at varying speeds, is a variety of traffic. Cars, trucks, vans and more drive back and forth across the screen. The concept and set-up is the same as Frogger but unlike that arcade cab classic, the movement is not grid-bound. Horatio is free to move however he pleases along this vertical slice of town, at full pelt or half steps.

Once you’ve successfully made your way across town, the chopper drops the titular character off at his intended destination – the top of a procedurally generated, snow covered mountain. The game then does exactly what it says on the tin. Horatio Goes Snowboarding. The blue moustachioed boarder proceeds to head down hill towards a goal that’s waiting at its base. Along the way, you’ll have to navigate around trees, avoid stones, plough over other skiers and avoid the occasional Yeti. Get to the bottom and you’ll head to the next day to repeat the process over again.

The aim of each run at the game is to rack up a high score. For each lane of traffic you cross without being hit by a car, you’re awarded with some points. Once you hit the slopes, that’s where the real action begins. Heading down the bank you’ll find flagged gates which, if you pass through them, award some points and add a score multiplier which chains together. As you hit consecutive gates, that multiplier will build up and you’ll really start to bank points. If you snowboard dangerously, by getting close to obstacles like trees, you’ll also win “showboating” points. Miss a gate though and that chain will break and you’ll have to restart it from the beginning.

Horatio Goes Snowboarding can feel quite challenging at first. Because you’re directing the motion of a character heading towards the screen with a necessity for precision, it can take some getting used too. I personally had to flick between inverted and non-inverted controls before I found something comfortable. Neither did for a while. There were a lot of crash and burns on the way to success.

A run at Horatio Goes Snowboarding ends when the titular character runs out of cash. Each run begins with a balance of $300. You can earn more by successfully reaching the bottom of the ski slope each day and you’ll earn more if you hit every flag gate on the way down, resulting on a “perfect run”. Renting a snowboard costs $20, so before you even hit the slopes, you’ll be down to $280.

The biggest expenditure comes via failure though. Get hit by a car or slam yourself into an obstacle and Horatio will wake up at the start of the same day having had to have spent $100 on hospital bills (thank god for the NHS). There’s no saving graces like there were in Horace Goes Skiing. This means that you’re only ever a few failures away from ending your run. Having to pay $100 on medical bills and another $20 to re-hire a snow board can put pressure on you to survive rather than aim to hit high scores, giving the whole game quite a tense feeling.

I came, I thaw, I conquered

The further you get into Horatio Goes Snowboarding, the longer your run lasts, the more difficult the game becomes. The procedural generation gets more challenging on the slopes with each new day, adding extra trees that are more closely grouped together and new obstacles like log piles. On the other hand, you also get better opportunities to earn points, with more skiers to run down and more gates to hit.

This doesn’t just apply to the snowboarding either. Simply getting to the chopper becomes more challenging. Vehicles get more numerous in the roads and they travel much faster. This means you’ll sometimes find yourself backtracking or trying to squeeze yourself between two cars as they pass you. It’s all quite basic stuff and a pair of concepts that have been around for nearly 35 years but they’re well implemented here.

That’s all there is to Horatio Goes Snowboarding really. You repeat this process – crossing the roads, snowboarding, repeat – until you run out of cash from failure and then start all over again. For those who start to get really good at the game, there are global and friend-only leaderboards should you have that competitive edge. Even if you’re just competing against your own high score, this game is quite addictive. It’s simplistic but quite engrossing and moreish, tapping into that “one more game” zone that keeps you playing.

It helps that the soundtrack to Horatio Goes Snowboarding is an absolute banger. It’s a staple of titles from this developer but the music is brilliant in this game. Sure, it’s an acquired taste, kind of a combination between old school action game OSTs and hard hitting drum and base, kind of like a dance remake of the main theme from Frogger 2. It perfectly sets a tone to get you racing down the hill though. I’ve actually had the game paused with the soundtrack running in the background while writing this review. Yes, my toe has been tapping.

There’s a sharp, British charm to the game too. When ever Horatio jumps out of his chopper to start his descent, he chirps out a little saying, for example. One of these sound bites is “Let’s be having you then boyo”, said with a Welsh twang that always reminds me of my Grandad dancing to Lonnie Donegan after hitting the Christmas sherry a little too hard.

It’s all downhill from here

In the end though, Horatio Goes Snowboarding lacks the originality that previous Infinite State Games have demonstrated. Even back in its heyday, Horace Goes Skiing felt like a rehash of two other more popular games, despite how fun it was to play back in the day. An unofficial, modern day twist on that concept feels even further diluted.

The game lacks diversity too. There’s only two modes in the game – arcade and endless – and both run with the same concept. It feels like there was untapped potential here to do more with the mechanics. I could have really gone for a multiplayer mode, checkpoint races downhill or other twists on the formula. Horatio Goes Snowboarding certainly feels like a one trick pony, but it does that one trick really quite well. Especially for the relatively small asking price.

A modern day twist on a neglected classic, Horatio Goes Snowboarding is a budget, simplistic but addictive arcade game. It’s not quite on the level of other Infinite State Games but it’ll still fill an evening or two with enjoyable twitchy action. Maybe longer if you take on the leaderboards.